If you had told me five years ago that slingshot RPGs were going to become a thing, I’d have been happy to hear of a future where Squids ($3.99) was so influential. Of course, Squids isn’t what really kicked off this craze. No, the current wave of flick-and-flail casual RPGs that are cropping up can be laid at the feet of Monster Strike (Free). It’s only natural a hit of that magnitude would inspire similar games, but it’s impressive just how sophisticated some of them are becoming. Gamevil’s entry into the proverbial arena is Knight Slinger (Free), and it might just have the best production values of any game like this yet. In terms of gameplay mechanics, it doesn’t mix things up too much, but there are some new things here that veterans of Monster Strike might like to play around with.

An opening cut-scene sets the stage for the story. It’s your typical forces of light versus forces of darkness bit, but the use of polygonal models and full voice acting give it a little more oomph than the usual social RPG fare. Honestly, I kind of zoned out on it, and the terrible voice acting certainly didn’t help. At any rate, once it’s over with, you’ll have your customary additional content download, then go through a tutorial that runs on a bit longer than it should. Missions are used as a breadcrumb trail to guide you through all of the various systems the game has to offer, though there isn’t much here you won’t already be familiar with if you’ve played any other social RPGs. 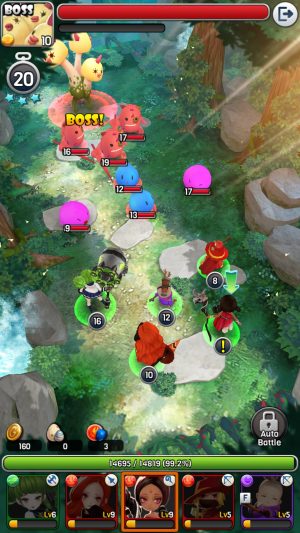 As is usual for the genre, you’ll need to build a team from the weaker characters you can earn somewhat easily through battles and stronger ones you’ll get a chance to pull here and there with one of three different special currencies. Characters can be fused to give one of them additional experience points, and when you’ve raised a character to their maximum level and gathered the appropriate materials, you’ll be able to evolve them into a new, more powerful form. Each character has a cost, keeping you from stacking all of your best characters onto a single team. You’ll have to make some choices about who you want to bring with you based on their unique talents and elemental affinities.

There are a variety of options as far as entering battles go. The regular adventure mode takes you through a series of quests, spitting out some story content here and there. The elemental dungeons change daily and give you a way to gather evolution materials. A magic tower helps you gather special runes you can equip for bonuses. There’s a duel arena where you can face off against another player’s team in real-time, a siege battle where you can battle other players asynchronously, and a guerilla battle where you can gather enhancement and selling materials. All pretty standard stuff, just with fancier names.

Each quest takes the form of a number of skirmishes against enemy characters. Your goal is to clear them all out by using the attacks of your team members. There are six different character classes in all. Some of the characters work just like those in Monster Strike. You pull back and launch them towards the enemy to deal damage. Just as in Monster Strike, these characters come in different flavors, with some piercing the enemy, others ricocheting off with a magic attack, and some who stop dead in their tracks when they hit an enemy. There are also characters who use projectile attacks. They won’t move around unless they get nudged by another character. Instead, you’ll pull back to bring up a target reticule of some type. Archers will fire a spread of shots, while characters with cannons and such can launch powerful area attacks. There’s a greater mix of mechanics on display here, making for some novel encounters. 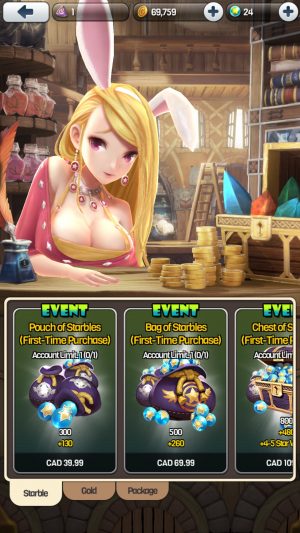 You’ll also have to mind the battle area itself, as it may contain certain gimmicks you can use against your enemies. Naturally, these gimmicks can be turned on you just as easily, though the computer opponent is generally not that clever. When the computer has one of their character turns come up, they won’t usually be sneaky about it, they’ll just try to overcome you with brute force. If it manages to knock out your team’s health points completely, you’ll be given the usual choice between using premium currency to continue, or simply taking the loss and trying again from scratch. Turn order is determined by character speed, and the enemies will often get to go first. Speed is quite important to take into account in this game, since you’ll probably want your projectile attackers to go earlier so that they can clear out blockers for your heavy melee units.

Again, Knight Slinger doesn’t go too far outside of the established lines of this sub-genre. Taking on quests consumes stamina that can be regained by leveling up, spending currency, or simply waiting. Pulling new characters requires one of three currencies, with the prize generally fitting the expense you sink in. You’re encouraged to bring the characters of other players into battle with you to earn friend coins, which can be exchanged for some weaker characters. You’ll naturally need to be connected to the Internet to play, and there are timed events a-plenty. The game doles out a reasonable trickle of the best currency, particularly in the beginning, but you’re naturally encouraged to spend some real money to get more if you really want to play the game to its fullest.

You can expect a smooth and breezy time in the beginning, but the game does start to squeeze you as you get further in. Doing things requires more stamina, and it doesn’t take long for the increased costs to outpace your growth via leveling up. Evolutions and enhancements start to cost more gold and require more rare materials, and the monsters get quite a bit tougher to encourage you to keep your team as close to the cutting edge as possible. Knight Slinger is pretty good about providing content for players of all levels, but you might find it necessary to spin your wheels for a while at certain points to get your team up to snuff for the next challenge. 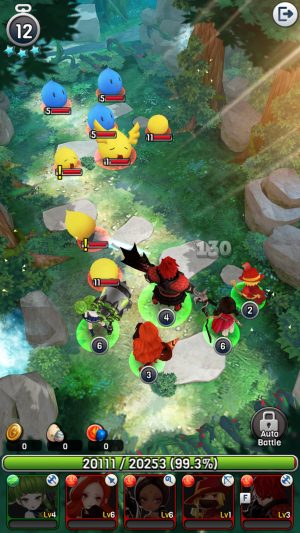 Apart from the minor tweaks to Monster Strike‘s core gameplay mechanics, the big star of the show in Knight Slinger is the presentation. Everything is rendered with polygons, allowing the game to use dynamic camera angles and let you look at your characters from a variety of angles. As they generally do, Gamevil appears to have lavished extra attention on the cute female characters in the roster. Fans of heaving bosoms spilling out of inadequate bindings will not be disappointed. But it’s not all sexy ladies, either. There are some other good character designs that go for a cute or cool image.

Sadly, the monsters are pretty lackluster all around. Not that the Dragon Quest Slime is a particularly complex design, but they’ve obviously nicked it for this game. Variations on that slime make up a disappointingly large amount of the enemy roster, particularly early on. The bosses look pretty great, at least. You can tell extra work went into making them stand out. The game also features a large amount of voice acting, and it’s even in English. Unfortunately, it’s both awful and repetitive, a bad combination if ever there was one. Each character has a catch phrase or two, and they are going to remind you of it at every opportunity. I wish I could tell you that there’s an option to shut the voices off, but I couldn’t find one.

There are plenty of strings attached to Knight Slinger, but fans of social RPGs are probably used to most of them by now. If you played and enjoyed Monster Strike and are looking for something to spice up your love of slinging, you should give this one a try. It has a few new ideas that make for some exciting battles, and the graphics are certainly quite nice. Just be aware that as sweet as it is in the early stages, it gets a lot tougher as you go along. Gamevil’s games typically have a harsher difficulty ramp-up than some of their competition, and that’s certainly the case here. But if you’ve played a lot of the game that inspired this one, that steeper difficulty might be just what you’re looking for.