If you were an iOS-only gamer following Capcom’s Ace Attorney series, things probably got a little confusing with Ace Attorney: Dual Destinies ($0.99). Why did it seem like Phoenix Wright was coming back to his job from a long time off? Who is this Apollo guy that takes up a third of the game? Wait, Phoenix has a daughter? What’s up with that? I’m not sure why Capcom decided to give mobile players the fifth game in a series before the fourth one, but they’ve finally decided to fill that gap. Apollo Justice: Ace Attorney ($0.99) is a beautiful remaster of the original game which, up until now, was exclusively found on the Nintendo DS. While the graphics aren’t polygonal like Dual Destinies, they were originally rendered at a much higher resolution than the Game Boy Advance sprites that were redrawn for the Phoenix Wright Trilogy. It’s also, for various reasons, generally not as well-liked as most of the other installments in the series. Nevertheless, it’s safe to say that if you enjoyed your time in the courtroom in previous Ace Attorney games, you’ll want to show up to the stand here, too.

From all appearances, Ace Attorney was meant to finish as a series with the third game, Trials and Tribulations. Phoenix’s story had been wrapped up with a bow tied on it, and most of the supporting cast had seen their sub-plots resolved, as well. The ending of Trials and Tribulations is pretty clearly meant to be a real ending. That made it difficult when Capcom decided to continue the series, this time making the leap onto Nintendo’s new Nintendo DS hardware. It’s not an unsolvable problem, mind you. The series had already come back from intended closure once before with the second game. But the fact that it had already done that made it harder to do it again, and some of the nuts and bolts of how the Ace Attorney games work also added their own issues to a potential Phoenix comeback. 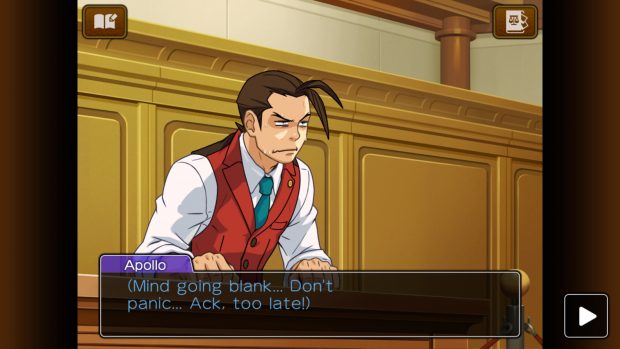 The first case of each game acts as something of a tutorial. For narrative reasons, the player’s character needs to be somewhat incompetent here. In the first game, Phoenix is a new lawyer, so it makes sense he needs to be taught. In the second, he takes a blow to the head right before a court date and needs to be walked through a few things while he jogs his memory. The third game opens with a flashback to the first case of Phoenix’s mentor, Mia Fey, so it makes sense that she needs to be walked through things, too. There are only so many times you can play the same trick, though, and by the end of the third Ace Attorney game, Phoenix Wright was far too experienced and competent to be used in a tutorial. On top of that, virtually every possible subplot was resolved with a great degree of finality.

So when it came time to bring the series back, its creator Shu Takumi did something really risky. He jettisoned almost every member of the original cast, not even allowing them so much as a brief appearance. Only the Judge would remain more or less intact, which makes sense. The boldest move was in benching series protagonist Phoenix Wright in favor of a new face, Apollo Justice. This solved a number of problems, both in terms of the narrative and the gameplay. A whole new cast of characters could be introduced, and Apollo had an excuse to need some assistance in the tutorial case. On the gameplay side, this allowed the game to introduce new mechanics without overloading Phoenix with magical talismans and so on.

Of course, you can’t make an Ace Attorney game without Phoenix at least making an appearance to pass the baton. That’s just what he does in Apollo Justice: Ace Attorney. In fact, it could be argued that the main plot revolves around passing the baton. But this isn’t Phoenix as you remember him. Seven years have passed, and his situation and outlook have completely changed. He’s cleverer. He’s more tired. Most importantly, he’s no longer practicing law. What happened? That’s one of the main mysteries of the game, and one you’ll unravel before too long. But there are other questions, too. Some will be answered by the time you see the credits. Others are answered in a later installment. A few will probably never be answered. 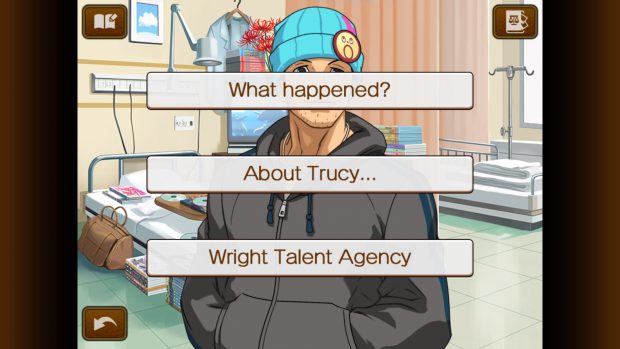 It’s probably not surprising that people didn’t react well to Phoenix Wright’s change in role, or the lack of familiar characters like Maya Fey, Miles Edgeworth, and Dick Gumshoe. It would be easy to write off the somewhat negative view of Apollo Justice: Ace Attorney as the thrashings of a fanbase who wanted the status quo to return. But the game has some other issues, as well. One of the cases is nearly insufferable, requiring you to view a certain clip so many times you’ll be ready to pack it even if it means an innocent person will hang. The new gameplay gimmick, which involves Apollo’s uncanny ability to perceive changes in a person’s body language when they’re hiding the truth, isn’t very exciting in practice. Finally, although Apollo is ostensibly the protagonist of the game, he’s merely getting pulled along for the ride through most of the story. That’s frustrating, because he’s meant to be your stand-in. You can’t help but feel like you’re a background character in at least half of the cases.

Still, it’s on more than it’s off. The court battles are as fun and intense as ever. Gathering evidence is an easy process that won’t let you proceed without everything you’ll need to win in court, and the dialogue is, in general, well-written and funny. There are a few references to extremely out-of-date memes, but I guess that comes with the territory. The back and forth between the forces of good and evil is quite compelling in this game, as it’s essentially a chess battle between two masters. The Ace Attorney games are great at creating nasty villains, and the big bad here might just be the evilest of the lot. Sadly, the prosecutor in Apollo Justice: Ace Attorney falls a bit flat. He’s not much of a rival, and really isn’t meant to be. Following Godot from Trials and Tribulations was always going to be a tough act, but it sort of feels like Klavier isn’t even trying.

What you end up with is a game that doesn’t do much to break away from the rest of the series in terms of mechanics, and perhaps does too much to break away in the narrative sense. Apollo Justice is nowhere near the dizzying highs of Trials and Tribulations, but it’s also far from the lows of Justice for All. I personally like it better than Dual Destinies, but I should probably make it clear that I’m usually in a minority with that opinion. One thing most can agree on, however, is that Dual Destinies did its best to walk back and retcon as much of Apollo Justice: Ace Attorney as it possibly could, so if you’ve been playing these games in the order they were released on iOS, you’re probably going to get a good dose of confusion along with some illumination. Plans for future games were clearly changed considerably, and that makes Apollo Justice a jarring experience in hindsight. 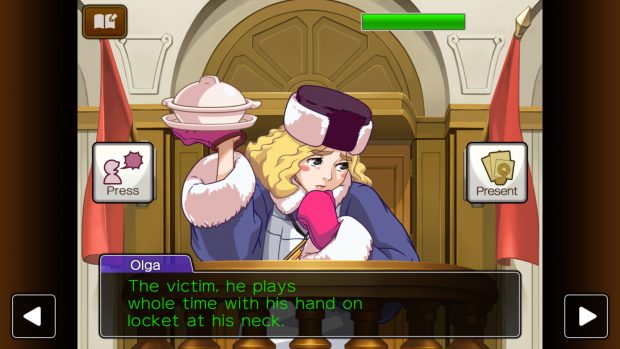 If you’ve never played an Ace Attorney game before, well, this probably isn’t a great place to start. It was meant as a fresh start for the series but it is still quite steeped in what came before, and since what came before is readily available on iOS, you really should play those first. Mechanically, not much is different here. This is a sort of visual novel hybrid where you play as a defense lawyer trying to secure a not guilty verdict for each of your clients. You’ll alternate between questioning people for information, searching areas for evidence, and using that evidence to poke holes in the testimony of various witnesses. It involves a lot of reading, some good old-fashioned pointing-and-tapping, and a good eye for contradictions. Sometimes, it also involves some ridiculous guessing to try to synchronize the game’s logic with your own. Not too much in this installment, but that aspect is still there. Fortunately, you can save and load with wild abandon, so it doesn’t have much impact if you guess incorrectly.

As for the quality of the port, it’s quite good. The original graphics didn’t need quite as much sprucing up as those of the first three games, but they do look great in high-resolution. Since the original game was on the Nintendo DS, the touch-based controls made a smooth transition. There are a few things to note, however. First, the game needs to check-in online when you start it up. After it has done its check, you can go into airplane mode and play happily off the grid, but if you don’t have internet for that first check, you won’t be playing. Given the other games used a similar structure and didn’t have that kind of requirement, I can’t imagine it had to be this way. Not a big issue, mind you, but worth mentioning. The game is also comically large in terms of how much memory it takes up when installed. You’ll need to have 2.4 GB or so free, which is quite a bit more than the other Ace Attorney games have required.

Then there’s the pay structure, which has been met with some controversy in our forums. The initial purchase price entitles you to the first half of the first case, which serves as a short taste to get you hooked on the premise. It’s basically a paid demo, and some people might not be okay with that. After that, you can buy the rest of the episodes a la carte or pick them all up at once in a discounted bundle for $14.99. Now, that gets you about 20 hours of game to pick at, so it’s certainly a good value, but be aware that you’re not getting much at all for that initial $0.99. I’m not quite sure what Capcom’s aim is with this strategy, but I can’t help but feel they’re going to get the worst effects of both the paid and free-to-play worlds by taking this route. 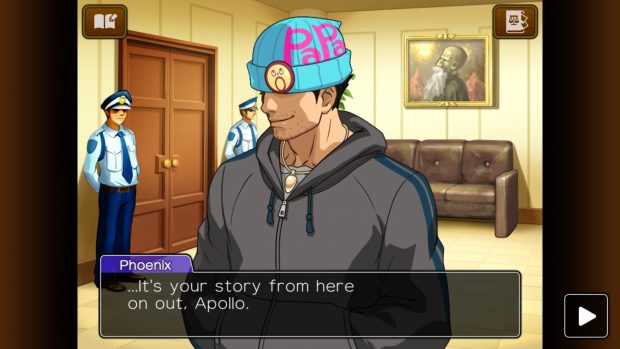 It’s nice to finally have Apollo Justice finally getting out to other platforms. For iOS owners in particular, it’s good that the odd presence of the Phoenix Wright Trilogy (Free) and Dual Destinies without their connecting tissue has been dealt with. This may not be the best entry in the series, but it’s certainly the boldest, and though it has a few low points, fans of the Ace Attorney formula should have a good enough time with it. Perhaps for some, it will be even easier to enjoy this time. After all, we know that most of its big changes don’t stick around. To me, that’s a shame, but for fans of Phoenix Wright, this is your chance to see a very different side of the character, free of consequences.