Written by Ellen Cooper, Congresswolf establishes a world where werewolves are real and discriminated against by the rest of society. It’s an obvious expy for any number of socially marginalized groups in our real society, and to that end, most of the werewolves you’re going to meet are protestors who are not wolfing out all that much when you run into them. There’s a subplot that explores the mythical side of werewolves more, but it ends up being a minor sideshow for the real plot of the game. Don’t come here looking for a werewolf story with political elements. This is a story about politics that happens to have a few werewolves stalking about. You play as a campaign manager for a candidate for congress in the months leading up to the election. A renegotiation of werewolf rights is one of the issues at stake, but only one of several considerations you need to keep an eye on. 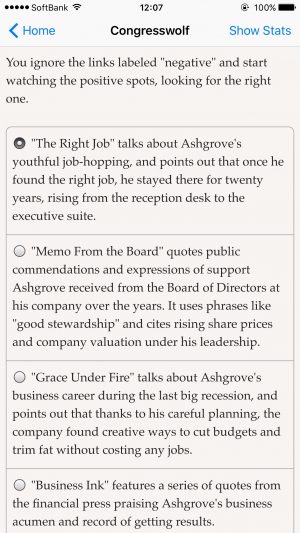 Since the game comes right out and says it, I don’t think it’s a spoiler to say that your boss, the candidate in question, is a werewolf. He or she is hiding it, but it’s obvious almost from the first time you meet them, something the game hangs a lampshade on later. It’s possible for that to have an effect on the campaign given the prejudice against werewolves in the world of Congresswolf, but you’re more likely going to be busy deciding on ad campaigns, spinning gaffes, and buttering up the press than covering up for any full moon shenanigans. Maybe it’s immature of me, but I was hoping the supernatural aspects would take a larger part in everything. You’ve got a great title like Congresswolf that has me expecting some howling out of a sunroof on the campaign trail, but instead, I’m balancing budgets. Reality bites.

The campaign side of the game is fairly well-handled and ended up being more compelling than I expected. It’s deep enough that you need to pay attention to it, but not so deep that you’re going to stress out over every little decision. The most frequently-occurring element is making sure you’re splitting your money intelligently between fundraising, polling, and reaching out to the voters. If you don’t spend enough on fundraising, you’ll have even less to work with next month. If you don’t put money into polling, you’ll have no idea how your candidate is doing versus his or her opponents. Finally, if you ignore the voters, you do so at your own peril. Other events during the course of the story might require a sudden outlay of cash, which can throw a wrench into your budget plans.

It’s not all about the money, though. You’ll also be making a lot of traditional choices. Those include advice to your candidate on speeches, whether you want to run a clean campaign or a sleazy one, what kind of ads you want to run, and so on. Outside of the political circus, there’s also a mystery about who killed the previous campaign manager to resolve, and some romance options. Congresswolf is a bit vague about your character compared to the usual Choice of Games releases. You choose your name, but rather than choosing your gender and sexual orientation, the rest of the book is written in a way that avoids being gender-specific. It does an okay job of that, but the way it writes around the topic is a bit obvious in places. The romances are another sideshow to the campaign stuff, but I felt like they were given their fair time here. 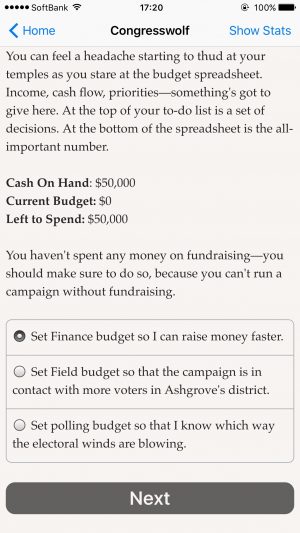 I liked a lot of the parts that go into Congresswolf‘s whole, but for some reason, I’m left feeling quite indifferent about it after the fact. If I had to guess why, I think it’s because the game leans heavily on the job of getting your candidate elected, but doing that turns out to be relatively simple. I usually have to play at least a couple of times to get a happy ending in a gamebook from this publisher. While there were a couple of sour notes in the epilogue on my first playthrough, I handily won the election for my candidate and managed to help out just about everyone. I also think the werewolf side of the story could have been handled better. Even as an allegory, it feels underdeveloped. It’s like the author was excited to write about werewolves in the beginning, but ended up falling in love with the political campaign plot instead. The wolves and their story of human rights get shunted to a backburner, practically shooed off the stage lest they draw too much attention from the candidate.

As is the case with many titles from Choice of Games, the initial download for Congresswolf is free. That gives you a portion of the story, with the remainder unlocking after a one-time IAP purchase of $3.99. It’s a good pay model that allows you to see if you can get into the plot and the author’s style before having to put any money down, which is something I certainly appreciate. The game includes Game Center support for achievements, with the chase to complete them lending a nice bit of replay value to the whole affair.

While it’s well-written and even genuinely funny in places, Congresswolf ends up heavily emphasizing the ‘congress’ at the expense of the ‘wolf’. That’s not necessarily a bad thing, but with the game leaning hard on the campaign management, that element has to carry the overall experience. Unfortunately, pulling out a victory over your opponent ends up lacking in challenge, leaving it all feeling rather empty. Maybe it’s just as well, though. Who could ever believe a story about politicians who are secretly monsters?