It is exceedingly unlikely that Square Enix will ever make another Final Fantasy Tactics ($13.99) game, at least in the traditional sense. I don’t say that to be a wet blanket, it’s just the way that it is. The series that seemingly introduced so many Western console players to strategy RPGs, a genre which has recently seen a serious boom in popularity worldwide, has apparently rode off into the night with its creator, Yasumi Matsuno. The weak reception to the third game in the series, Final Fantasy Tactics A2, probably didn’t help matters, and without Matsuno at Square Enix to champion for it, the publisher looks to have lost interest in the brand. There were a couple of free-to-play browser games that didn’t really go anywhere, but I suspect that’s not the sort of thing that series fans are looking for anyway. What to do? 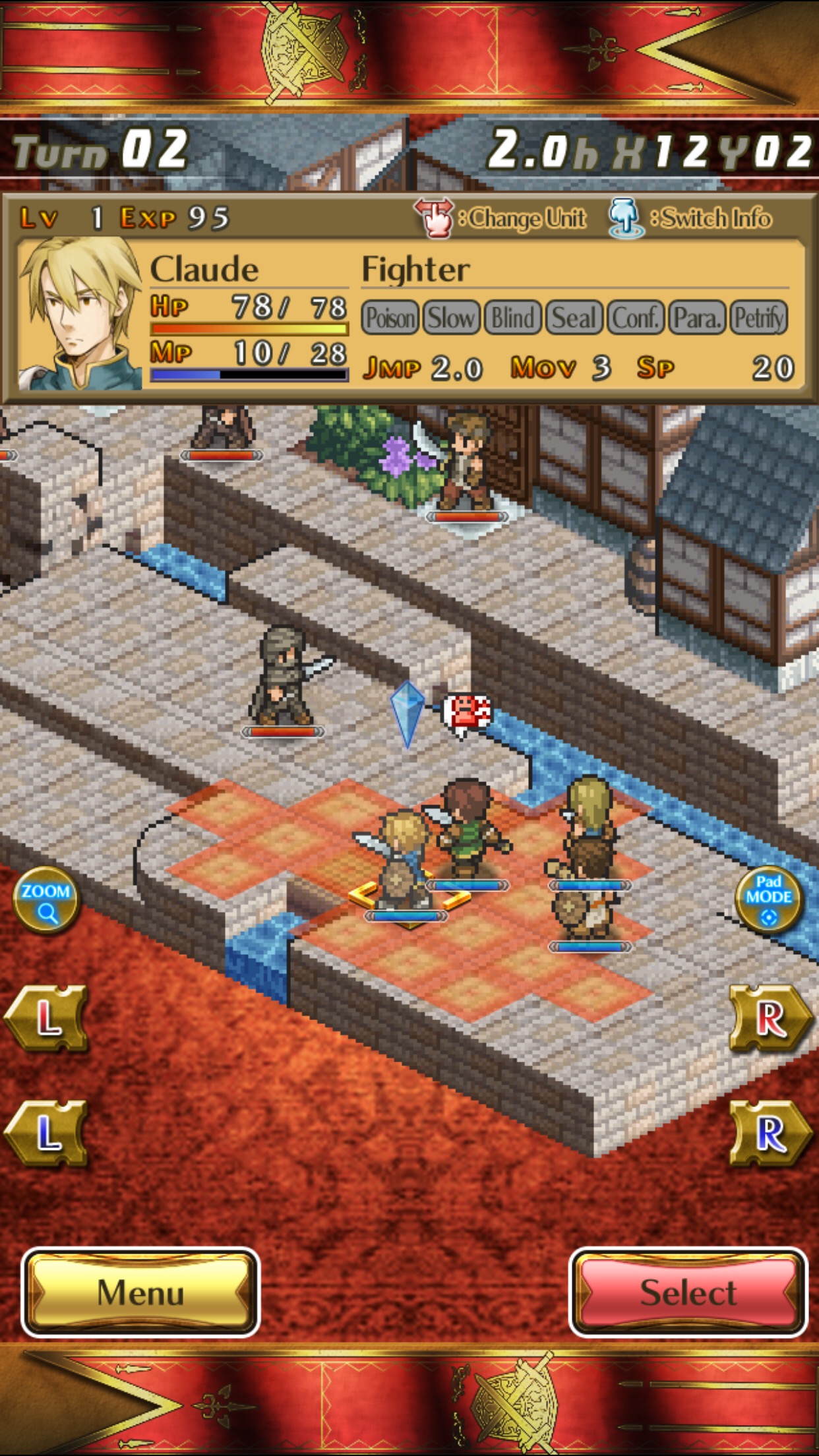 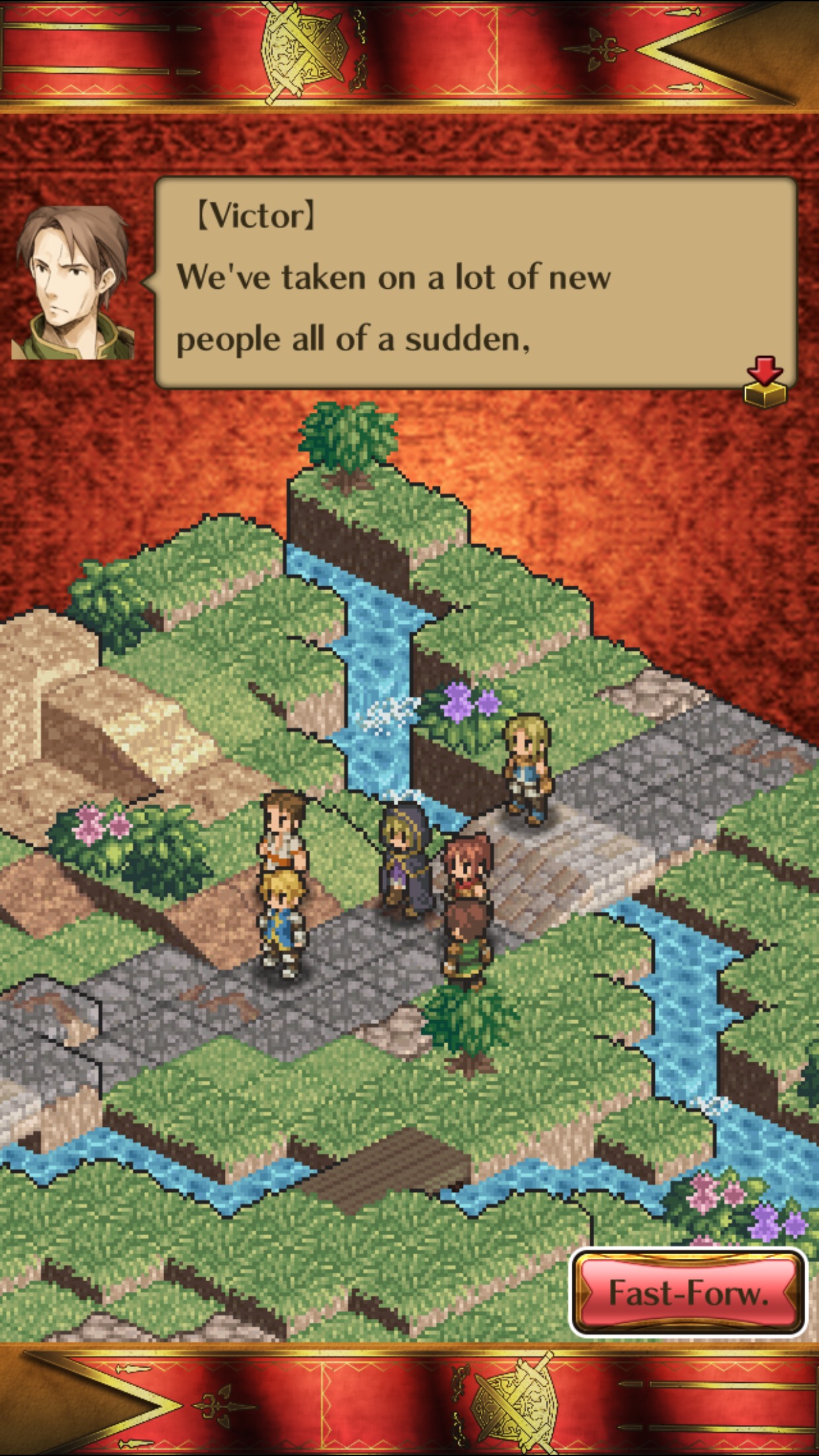 Fortunately, there is no shortage of games looking to fill that void. Over on the Nintendo 3DS, the long-running Fire Emblem series has been tearing up the sales charts. PlayStation Vita owners have a selection of Disgaea games and, if nothing else, can access the excellent PlayStation Portable remake of Tactics Ogre. Console and PC owners can play a wide range of games in the genre from indie sensations like The Banner Saga ($9.99) to full-budget offerings like 2K’s XCOM ($4.99) revivals and SEGA’s Valkyria Chronicles series. This is one genre where mobile is no slouch, either. The genre suits the stop and go lifestyle of most mobile gamers well, and touch controls prove to be a benefit rather than taking anything away. Now, one of the great things about the selection of strategy RPGs on mobile is that most of them go in their own direction in one way or another. The downside of that is that if you’re just looking for a clone of Final Fantasy Tactics, you’re going to come up relatively dry. 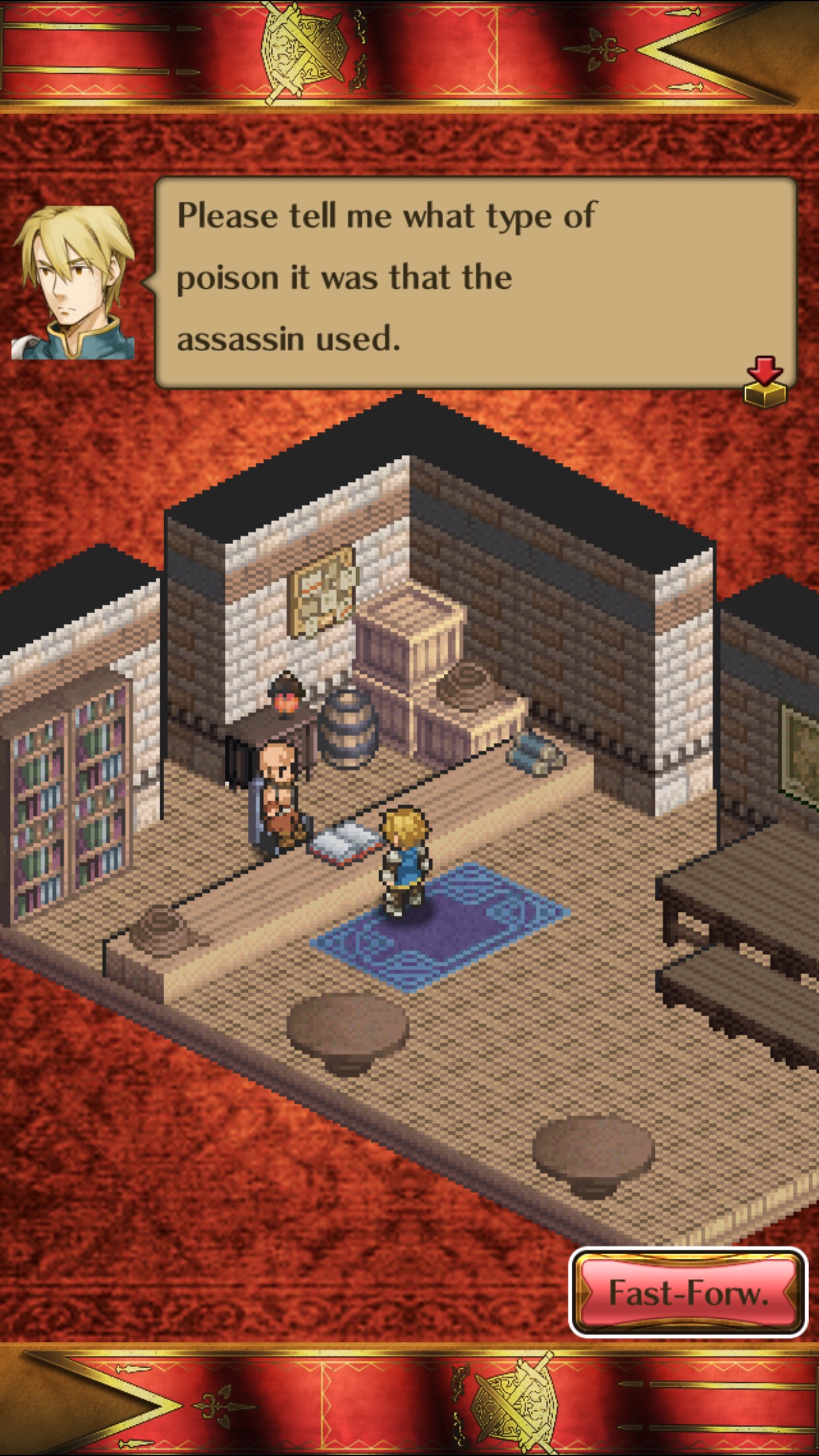 Interestingly, that’s a niche that has been served in the Japanese mobile gaming market for quite some time. Rideon Japan, perhaps best known outside of Japan for Adventure Bar Story ($2.99), has been making mobile RPGs since the feature phone days. Their titles are typically low-cost affairs that recycle their engine and assets in a manner not so different from Kemco’s developers. In fact, in the early days, Kemco used to publish their games in Japan. Typically, Rideon keeps away from doing straightforward JRPGs, instead doing their best to cobble together budget odes to quirkier games like the Atelier series. Their strongest success in Japan has been with the Mercenaries Saga series of strategy RPGs, but up until now, those games have largely stayed in Japan. The series finally got its first official English localization in July of 2015 when Circle Entertainment brought Mercenaries Saga 2 ($2.99) to the Nintendo 3DS eShop worldwide, and that translated version has now been made available to iOS players.

Mercenaries Saga 2 isn’t shy about where it draws its inspiration from. There are a lot of things that will be familiar here for any fan of Matsuno’s Tactics games, both in terms of the broad strokes of the gameplay mechanics and in smaller details like being able to throw rocks. The game consists of just over 30 missions that send you to various isometric battlefields to slug it out in turn-based combat with packs of enemies. You’ll get a little cut-scene that sets up each mission, and if you feel like hopping off the roller coaster for a bit of grinding, there are skirmish maps available between story missions. There’s even a job system that requires you to unlock more powerful jobs by gaining levels in your current job. Battles yield special points you can use to unlock and strengthen job abilities. 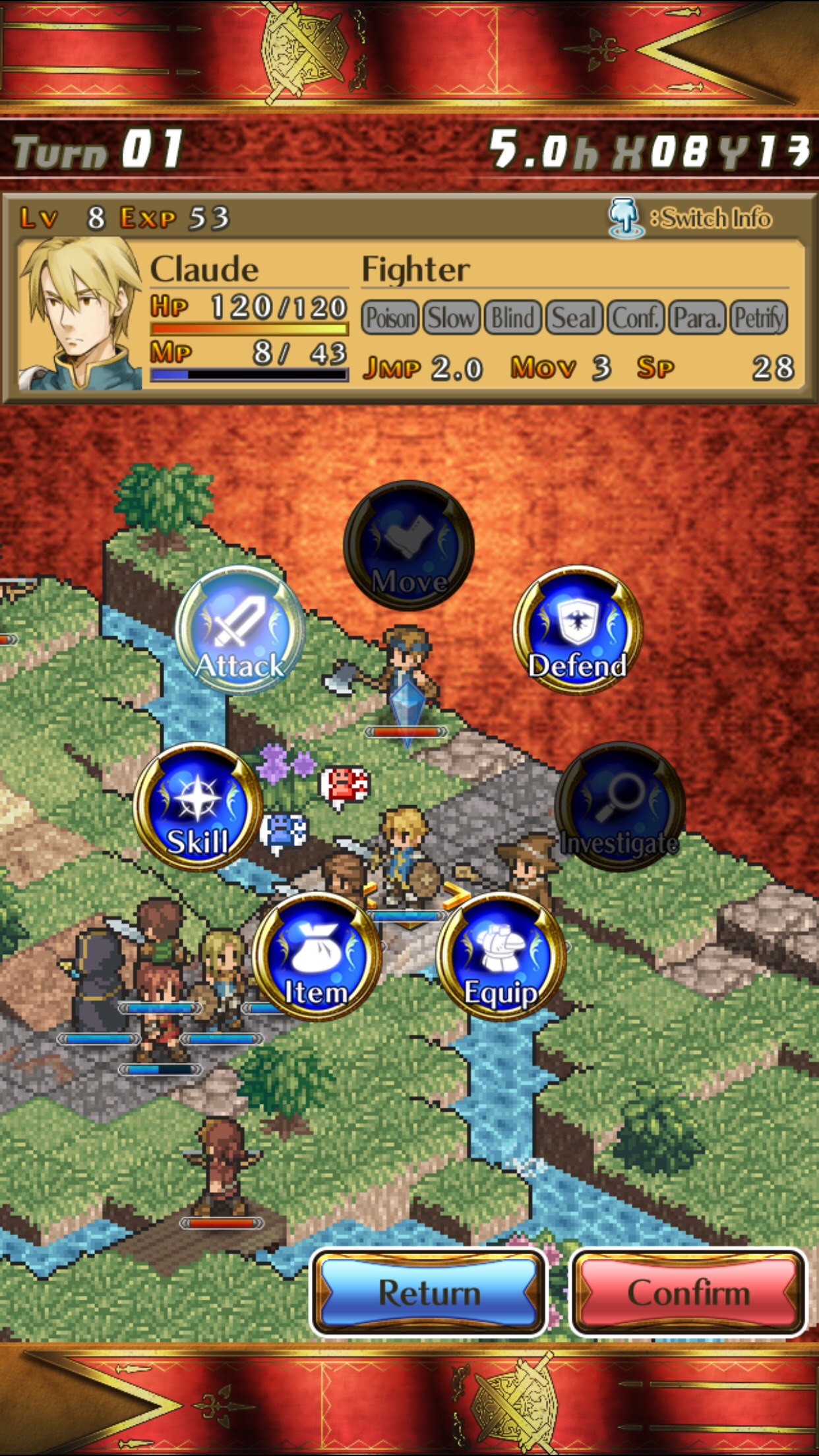 Before you get too excited, however, it’s worth mentioning that all of this stuff is on a much smaller scale than in Final Fantasy Tactics. Fewer jobs and abilities, a lighter roster of characters, smaller maps, and considerably scaled-down production values. You don’t have nearly as many customization options, and the missions themselves lack the devious planning that went into some of the more famous stages from Final Fantasy Tactics. It hopefully goes without saying that the story can’t hold a candle to the tales written by Matsuno. All of this is to be expected, mind you. A small developer making a low-budget game designed around feature phone specs and input methods is not going to be able to match a major effort from Square Enix. But it hits enough of the same buttons that, while it may not scratch your itch for a new Final Fantasy Tactics, it grazes that itch well enough that you’ll feel some temporary relief.

The biggest thing spoiling the fun in Mercenaries Saga 2 is a vestige of the game’s origins as a feature phone game. The controls are just about as terrible as they could be. The game was clearly designed to be played with a feature phone’s directional keys and buttons, and although the iOS version gives you a choice between virtual keys and a pure touch set-up, neither one works as well as they need to. The virtual keys are small and fiddly, while the touch controls seem to fumble when it comes to targeting grid spaces on the board. You can easily switch between the two using an on-screen button, but it’s pretty irritating to constantly flip back and forth, so I mostly ended up gritting my teeth and dealing with the drawbacks of the virtual keys. It’s also only playable in portrait mode, which was fine for me, but might turn off those who prefer to play in landscape. 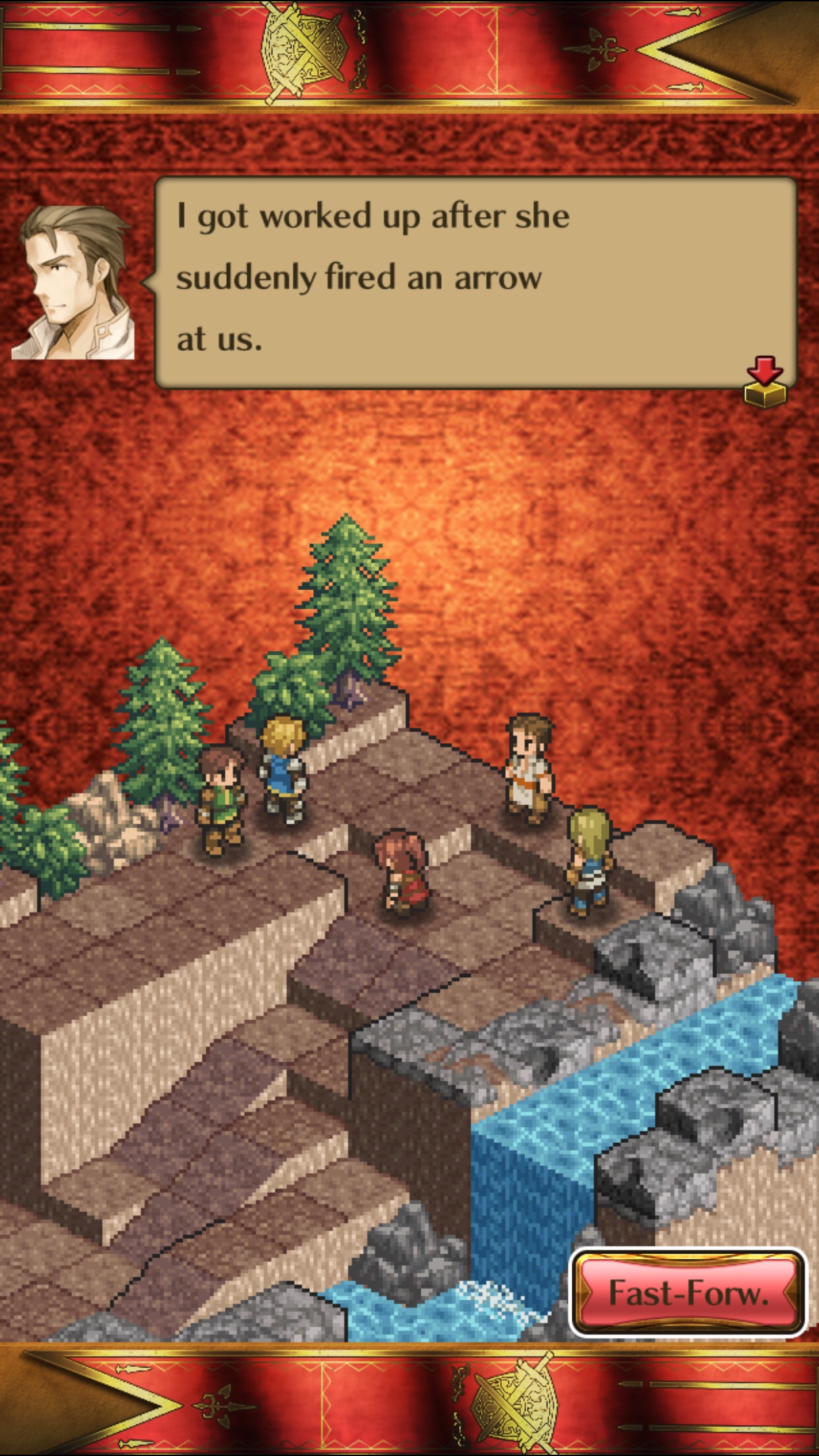 The game also suffers from some balance issues. The thief job is almost entirely useless. They can barely hold their own in a fight, and both their stealing command and treasure-searching skills rarely yield the desired results. By contrast, magic users are almost too powerful, lacking the delay in casting their spells that some other titles use. The map designs and enemy placements are just sort of there, but the tight quarters can make for some tense battles, particularly if you focus on the story and avoid the extra experience that can be earned in skirmishes.

The consequences of losing a character in battle aren’t nearly as severe as some other strategy RPGs. You have five turns to get a fallen character up on their feet. If you can’t do that, they’ll retreat from the battlefield, forfeiting the chance to earn additional experience. Otherwise, they’ll be just fine, waiting to be used in the next battle. There are a variety of conditions that you’ll come across during the course of the game, but generally, as long as you keep at least one member of your team breathing at the end of the battle, you’ll win. Meat and potatoes at best, but they’re seasoned well enough to be a decent meal.

One area where Mercenaries Saga 2 does manage to break away from Final Fantasy Tactics is in its inclusion of IAP. There’s a premium currency in the game that you can buy and exchange for some extra special items in the shop. It would be nice if there were a reliable way to earn that currency in game, but losing access to those items doesn’t have that big of an effect on the main game anyway. This being a Rideon game, there is naturally an attempt at a crafting system, as well. It’s very basic and half-hearted, but you can fuse together any magical gear you find to try to create something new. Most of the gear I tended to pull off of enemies actually had worse stats than the normal stuff, though, so I generally ignored it in favor of regular gear. 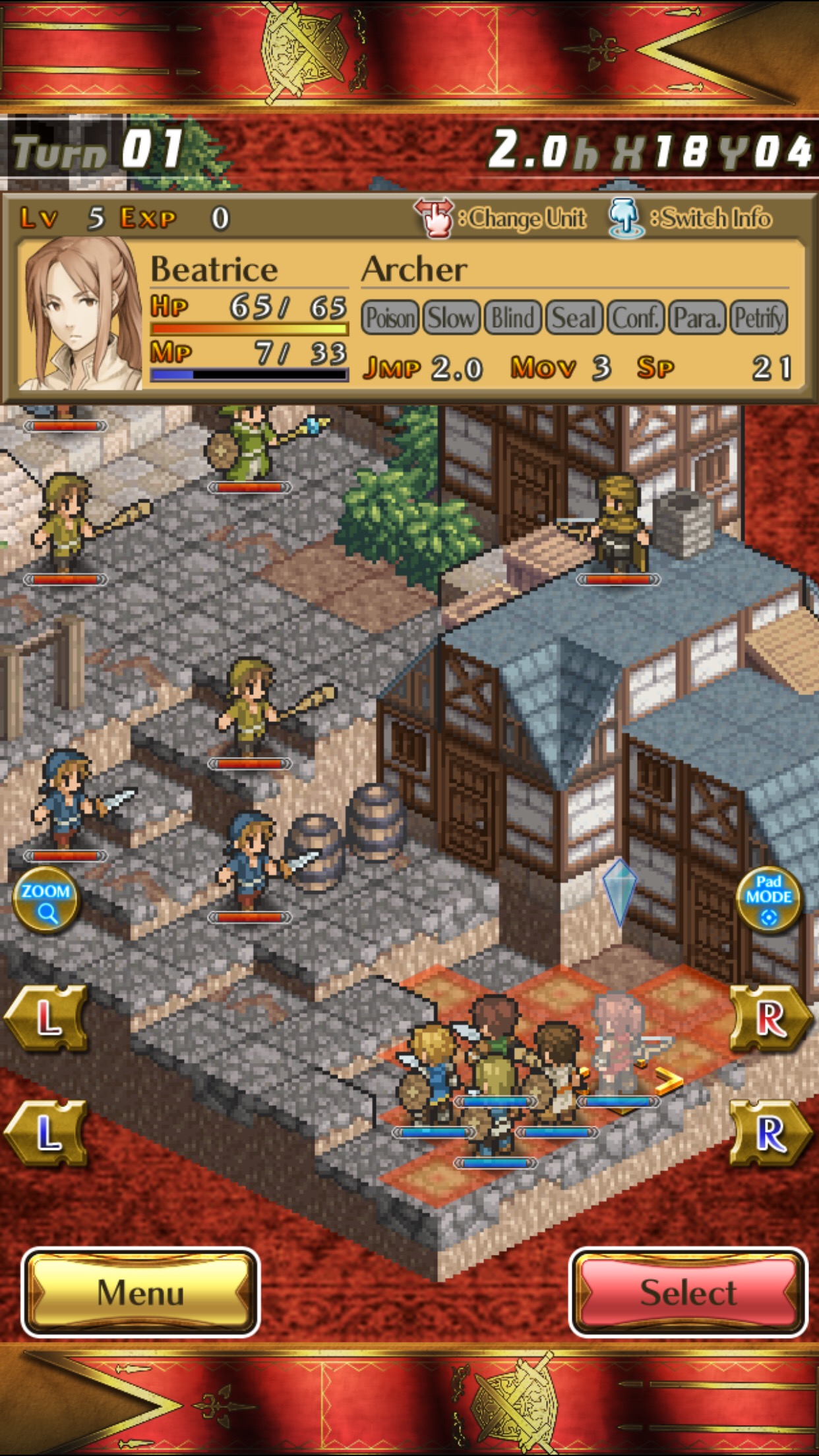 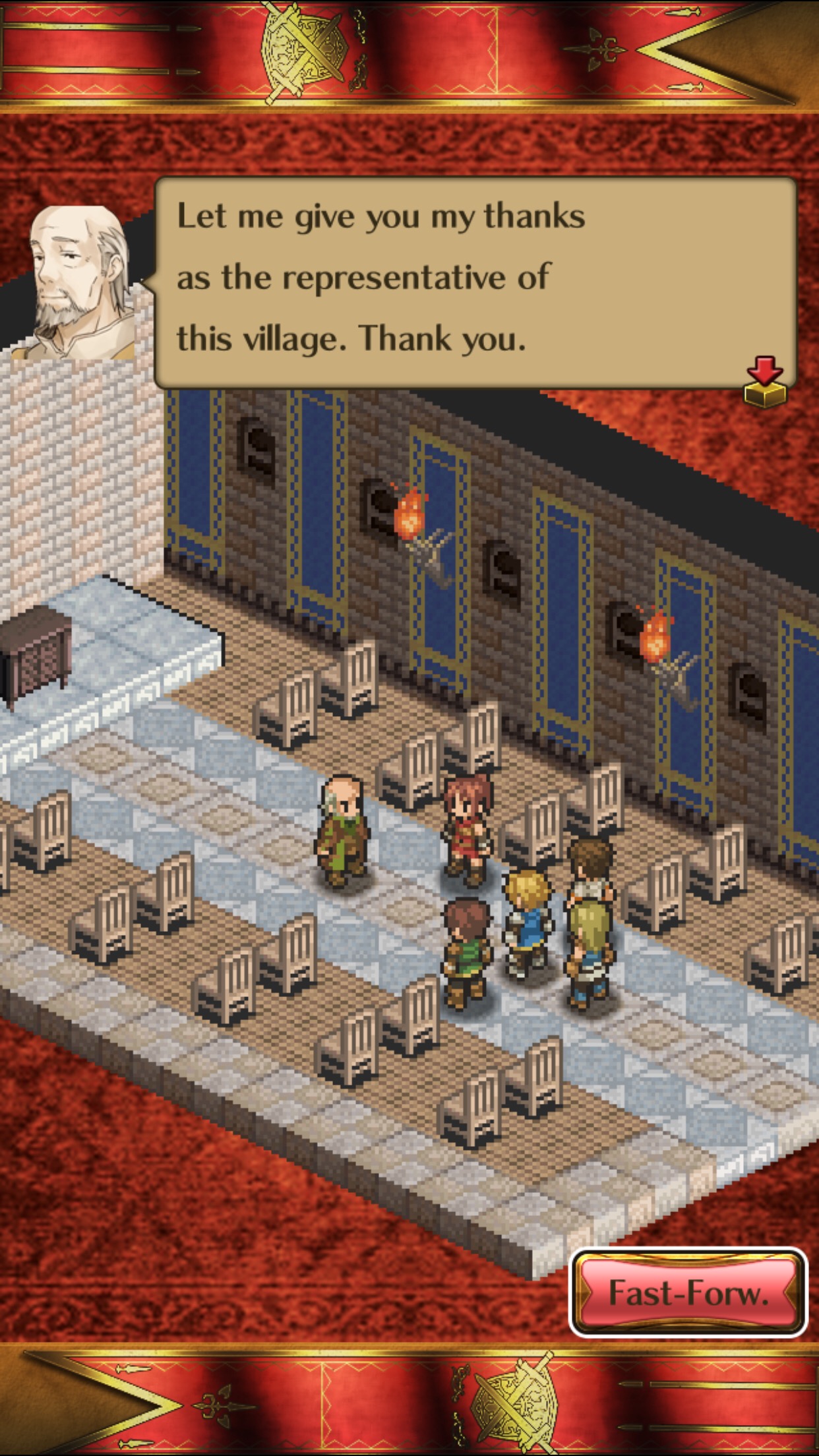 Even with its overall lack of originality, control issues, and occasionally dull encounter design, Mercenaries Saga 2 follows the notes well enough that it should be of interest to fans of Final Fantasy Tactics. You’ll get about fifteen to twenty hours of solid strategy RPG for your money, and even if it’s not the most creative of games, it does its routine diligently. With any luck, this game’s English release will point to further localizations from Rideon, particularly this game’s sequel. Mercenaries Saga 2 is just good enough that I could imagine the sequels eventually leading to something more interesting.