That Mikey sure gets around. He uses hooks, boots, and even shorts in his previous adventures on iOS. But what if Mikey were to put down his shorts for a minute and just, you know, jump? Alright, all kidding aside, the Mikey games have always been about precise platforming, a gameplay mechanic that usually involves all kinds of jumping. So what is the deal with this new game? Well, I suspect Mikey Jumps (Free) got its name from the fact that you’re really only dealing with what would be the jump button in previous games. As it did in those games, it does all sorts of things here, but the key difference between this spin-off and the mainline games it that Mikey automatically runs forward at all times. Your job is to make sure you’re hitting that jump button at the right times to keep Mikey (or friends) alive, collect lots of coins, and grab the star at the end of each stage. 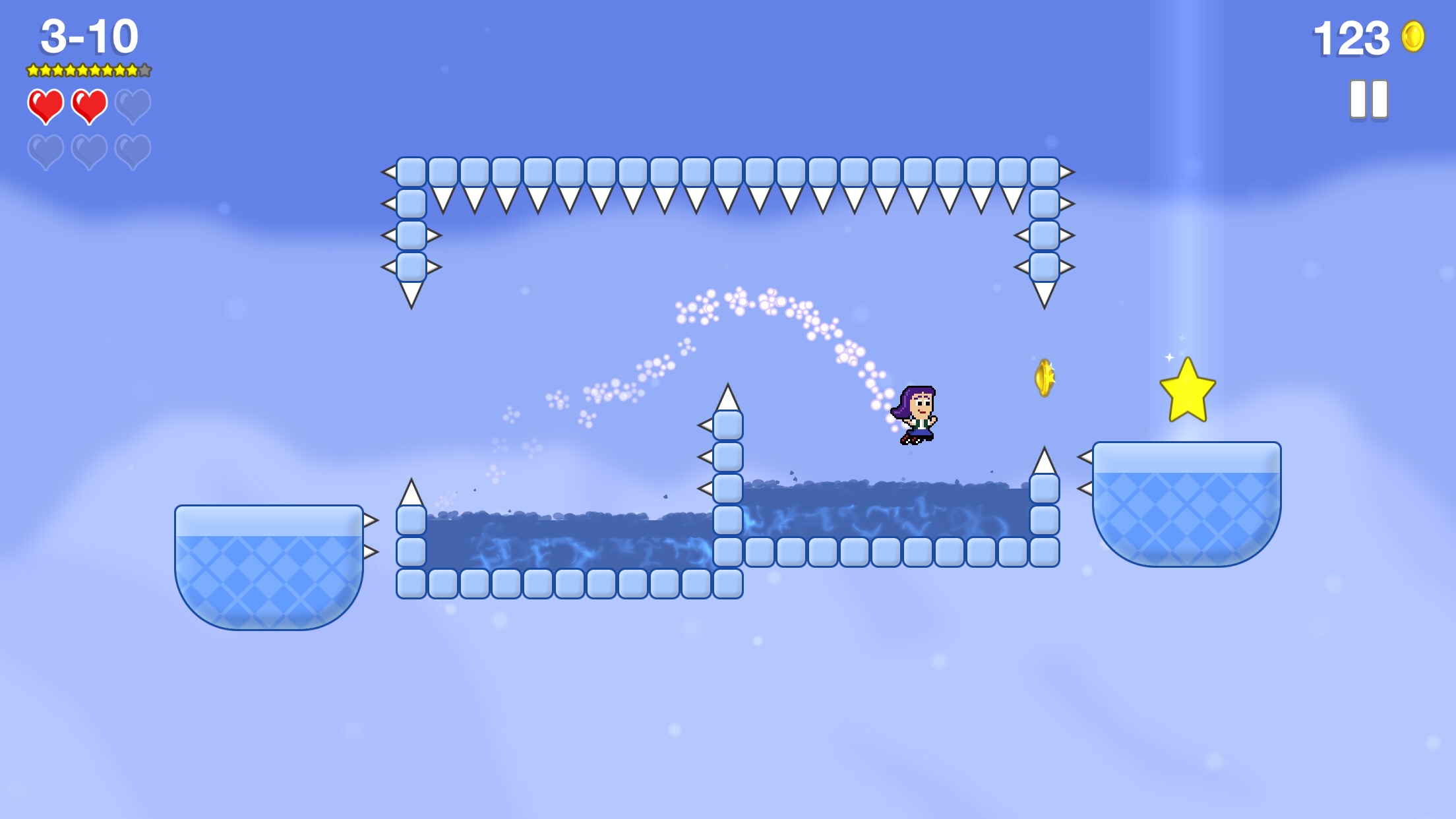 If you’re coming into Mikey Jumps looking for exactly the same kinds of challenges the previous games set forth, you might be disappointed. This is a far more streamlined, straightforward type of platformer. The stages are all single-screen affairs, and you’ll be able to see everything in each stage right from the get-go. You won’t be exploring and sniffing out secrets. Instead, you’ll be making your way through a 200-level gauntlet of challenges that draw on all of the skills from previous Mikey games. You’ll need to jump, grapple, and boot-rocket with precision to survive. The stages are broken into 10-stage sets, and you only get a finite number of lives to clear each set. In essence, Mikey Jumps is like a rad Mikey series clipshow with all of your favorite gags and moments spliced in rapid succession. It’s a different kind of excellent than the regular Mikey games, but it’s excellent nonetheless.

Each level tasks you with making it to the star at the end a series of obstacles. There are also coins to collect along the way that can be used in a draw that gives you new parts to customize your character with. Some levels are straightforward jumping challenges, some require you to swing from your hook, others have you using rocket boots, and many contain a mix of all of these elements. While the levels are bite-sized, many of them present quite a challenge to pull off correctly, and the added pressure of needing to beat the whole set without running out of lives gives the game just the right amount of bite. It’s interesting looking at the level design in Mikey Jumps compared to, say, Mikey Shorts ($1.99). You can really see how much BeaverTap has learned about designing efficient, fun challenges. Mikey Shorts was awesome, but Mikey Jumps features some seriously densely-packed levels. 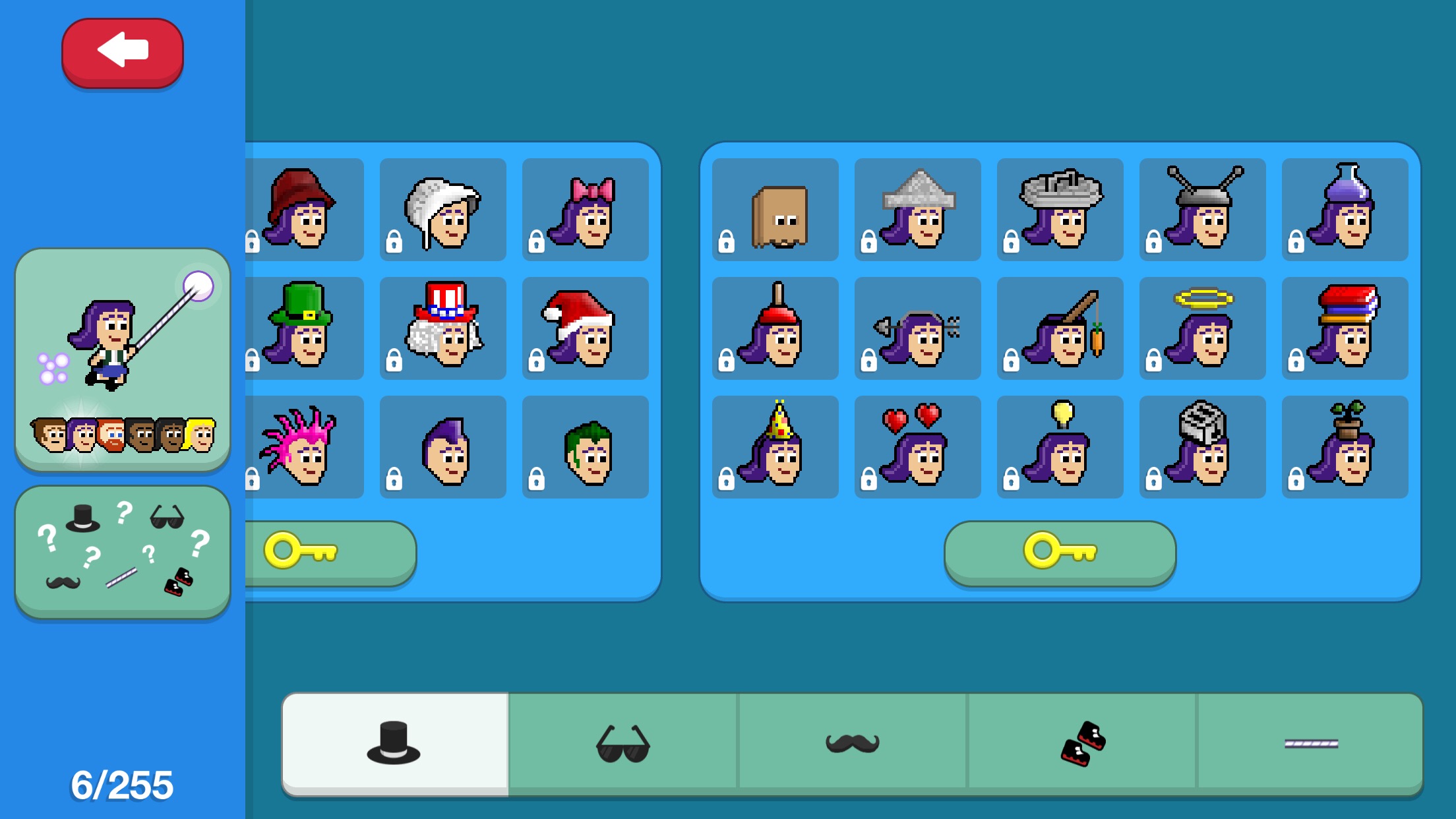 While the Mikey games are good fun in and of themselves, I believe they took on the life that they did thanks to competitive elements, most notably speedrunning. By its auto-running nature, Mikey Jumps can’t really do that sort of thing. Instead, there are two Game Center leaderboards to compete on. The first is a simple count of the stages you’ve beaten. That board obviously maxes out at 200 and there are quite a few players with that score already. The real meat seems to be the No Hit Streak board, which counts how many consecutive stages you can clear without losing a life. Again, this is a very different sort of enjoyment from the speedrunning focus of previous games, but it requires just as much skill and careful planning.

In another break from the previous games, Mikey Jumps is free to play with ads appearing each time you run out of lives. If you want to get rid of those ads, there are a bunch of optional IAPs you can purchase. Buying any of them will remove the ads from the game. There are several $0.99 packs of customization parts you can buy if you don’t want to wait to unlock them. There’s a $1.99 IAP that permanently gives you more lives with which to beat each set of stages with. You can also pick up a coin doubler for $1.99 that will help you unlock parts the old-fashioned way. You’ll be awarded with free coins at regular intervals either way, and if you don’t buy the extra lives IAP, you can still give yourself a leg up on your next run by watching a video ad. As you might guess from the presence of a No Hit Streak leaderboard, none of this stuff is particularly necessary, but if you want the ads out, there are routes open to you.

If you were in love with the speedrunning elements in the previous Mikey games, I could see Mikey Jumps being a bit underwhelming for you. It’s also fair to point out that Mikey‘s got a lot of miles behind him at this point, so some players might be over his particular brand of entertainment. But I think if you approach Mikey Jumps with a clear mind and leveled expectations, you’ll find a really fun, cleverly-designed platformer with some brilliant level designs and rock-solid controls. It’s like a less aggravating Mr Jump (Free) with a lot more content to chew on. A distilled shot of pure Mikey. And who couldn’t use a good shot right about now?

Disclosure: One of the members of BeaverTap Games, Mike Meade, is a semi-regular guest on the TouchArcade podcast. But I’ve never met or talked to the guy and he won’t even follow me back on Twitter, so we’ll see if he’s invited to any of my hoity-toity wine and squirrel-petting parties!