The game of chess may well have been one of the earliest examples of a game being easy to learn but hard to master. Learning how all of the pieces move and putting together a basic strategy towards getting a checkmate isn’t that difficult, but the unpredictable nature of human behavior makes chess a game that always has something new to offer. There’s almost always a move to make that could be considered the best, but it’s only the best if your opponent reacts in the textbook way themselves. A strong chess player needs to study their opponent almost as intently as the board. That said, there’s a lot to be said for learning some fundamental strategies, just in case your opponent plays things by the book. As an added bonus, that knowledge will help you if you decide to play Moveless Chess (Free). 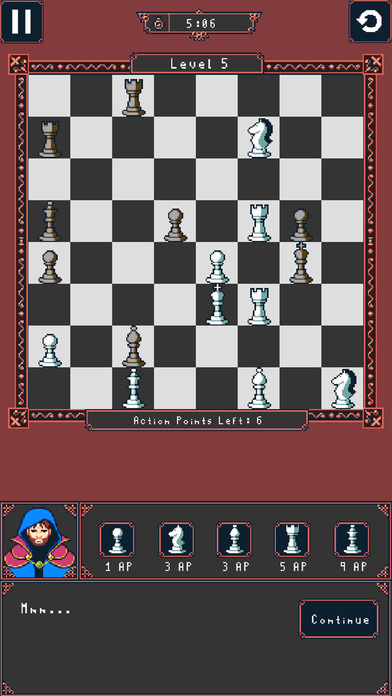 Moveless Chess is a puzzle game that depends heavily on your knowledge of chess strategy. Each of the game’s 64 stages presents you with an arrangement of pieces, challenging you to put the opposing King in checkmate. The main gimmick, as the title implies, is that you can’t move any of your pieces. You can, however, use your magic to change any of your pieces into another type of piece. Each change requires a certain number of action points, and each stage only offers you a set amount of those to draw from. It’s up to you to figure out the changes you’ll have to make to attain checkmate. As you make changes, the computer opponent will react accordingly, and many of the stages involve herding certain pieces away from the King before delivering the coup de grace.

Fortunately, the computer reacts in a very predictable manner. It will greedily chase after any high value piece so long as doing so doesn’t put the King in check, even if few human players would ever be that silly. The game also doesn’t care if you end up with the wrong assortment of pieces on the board, a quality it shares with another recent release, Really Bad Chess (Free). In spite of sharing a lot of traits with that game, though, Moveless Chess is quite distinct. If Really Bad Chess is about teaching you to think on your feet, Moveless Chess is about developing your ability to form and execute a multi-step plan. Really Bad Chess is somewhat open-ended, giving you the freedom to make errors or win in your own way. Moveless Chess rarely offers more than one strict solution.

That’s to be expected, I suppose. Despite the similar themes, the two games are essentially sitting in different genres. Moveless Chess is a puzzle game, through and through. It will smack you around a bit with a softball bat while you fumble around trying to find a working solution to the problem at hand. It will chuckle at your misery as you see defeat snatched from the jaws of victory for failing to account for one piece or another. Like any puzzle game worth its salt, however, the feeling of satisfaction upon finding the correct solution is wonderful, particularly if you’re able to do it without too many mistakes. Moveless Chess is a tough nut and it ramps up the difficulty a bit quicker than it probably should. It stops giving you any hints whatsoever after a few levels, and there’s currently no way to skip a level if you get stuck. If you’re able to get into the swing of it, you’ll likely devour the game in a few sittings, but it’s easy to hit a roadblock and feel like there’s nothing to do about it. 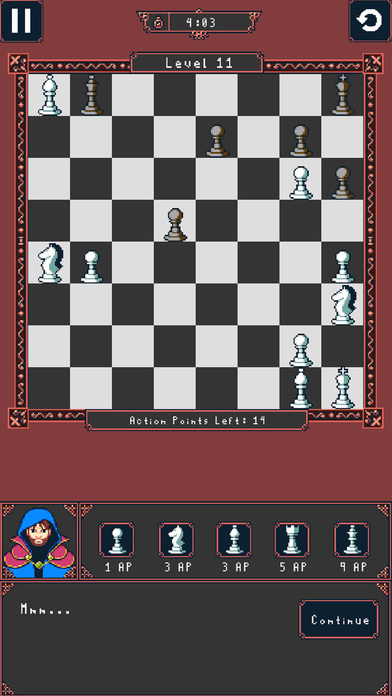 Moveless Chess is free to play, supported by ads. You’ll occasionally view an ad between levels, and a timer constantly ticks down while you’re playing. When it expires, you can either wait a short period of time to get four more minutes, or you can view a video ad to get eight minutes. If you’d rather not deal with any of that, an IAP to remove the ads and the timer is available for $0.99. The visual presentation and music are both quite good, with the latter doing the difficult job of not getting annoying as you try to puzzle out the answers to increasingly difficult problems. The developer has advised me that he plans on adding in the ability to skip levels in a future update, which I think will help the game by opening it up without toning down on the difficulty of actually completing levels.

As it is now, there’s a very real chance you could get caught on one level and be done with the game. I think Moveless Chess has the most appeal to those who have a lot of experience with chess and will come to the game with a good list of strategies already learned. For chess novices, it might be more of a frustrating experience than an enjoyable one. At the very least, I can promise that if you stick with it, you’ll learn a lot of useful techniques for the actual game of chess. Just don’t try to pull off that piece-swapping trick in tournament play. They frown on it, I can assure you.