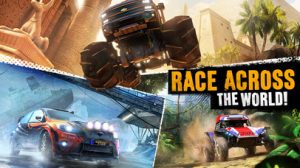 Anyone remember when Gameloft’s release road map leaked? It happened on April Fools Day, so I’m pretty sure everyone assumed it was a joke, but, we’re now starting to see games hitting the App Store from the leak, which really makes me think the rest of the schedule is also true (if not delayed a bit). Here’s what we said, avoiding any DMCA-able titles (even though those were leaked as well):

Starting with Q2 of 2016, Gameloft is planning on releasing a new version of their popular racing game which is now a series that includes eight different games. This time around may be a little more “extreme" than previous versions of the game. This new racing game will feature rally cars, monster trucks, souped up jeeps, dune buggies, and even something that looks like a VW Microbus with monster truck tires.

Yes, we’re in Q4 and not Q2, but, here’s what Asphalt Extreme looks like which is basically exactly as described:

Like previous Asphalt titles, the game is free to play which undoubtedly will annoy some, but considering it’s effectively impossible to charge money for a mobile game anymore… It is what it is. Currently Asphalt Extreme is soft launched in both Denmark and the Philippines, and it’s anyone’s guess as to whether or not the soft launch will expand to more territories and when it’ll actually hit the US.