Way back in January of this year, Nicalis began cryptically teasing a possible iOS port of critically acclaimed roguelike The Binding of Isaac: Rebirth. All that teasing wasn’t just for fun, though, as an iOS port was actually a very real thing that Nicalis was planning on releasing. Very shortly after that, though, the Apple Approval Gods squashed all hope of the port happening when they rejected The Binding of Isaac: Rebirth for being a game that depicted violence towards children. Isaac, as you might already know from the game on other platforms or from the Biblical story which it’s based on, is a child and the son of Abraham. Simply making Isaac “not a child" to appease Apple wasn’t really an option. So, we all sighed heavily and shed a few tears, and hoped that someday Apple would come around on the idea of Isaac being on iOS. And apparently they have! In a new post on the Nicalis blog producer Tyrone Rogriguez gives all sorts of updates about the various versions of The Binding of Isaac, and says of the iOS version:

TL;DR It’s coming to iOS VERY SOON!!!The game has been approved by Apple and we’re working on getting all the features we want into the game. Obligatory bulletpoint list: – It’s a universal binary so you buy it once for iPhone, you can download for free on iPad (and eventually Apple TV–eventually, we don’t have timing on the Apple TV version)- iCloud save support for uploading/downloading save data between those devices- Bluetooth controller support 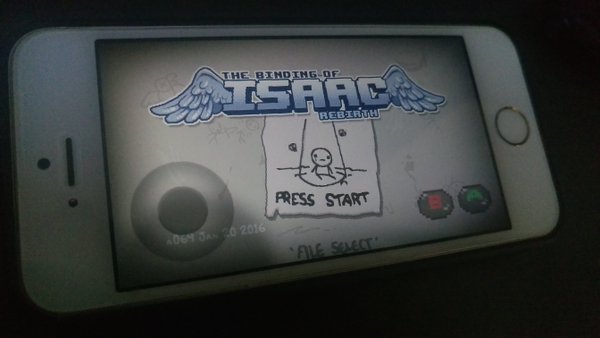 So there you have it. At long last we’re finally getting the real deal The Binding of Isaac on our iOS devices. Er, maybe I shouldn’t sound so definitive about that until the game is actually out and available on the App Store, you know? I mean, anything can happen when it comes to Apple approval. But the good news is that things look pretty good for its release as of now, so once we have a more specific date for launch and the pricing details we’ll be sure to tell you. Until then, rejoice with the others in the game’s forum thread.