Let’s address it immediately: Treasure Buster ($0.99) is obviously inspired by Mixi’s Monster Strike (Free). Much like this developer’s previous game, Slayin ($0.99), this game initially comes off uncomfortably similar to the object of its homage. Luckily, also like Slayin, Treasure Buster ultimately differentiates itself well enough to transcend the copycat label and settle in as an interesting variation on a tried and tested mechanic. In fact, I would say that this game ditches a lot of what makes Monster Strike so much fun, choosing to create its own brand of enjoyment by adding a number of gameplay elements that Monster Strike doesn’t have. As usual for a game published by FDG, Treasure Buster also looks and sounds great, fusing a bang-on retro presentation to a very modern gameplay structure. 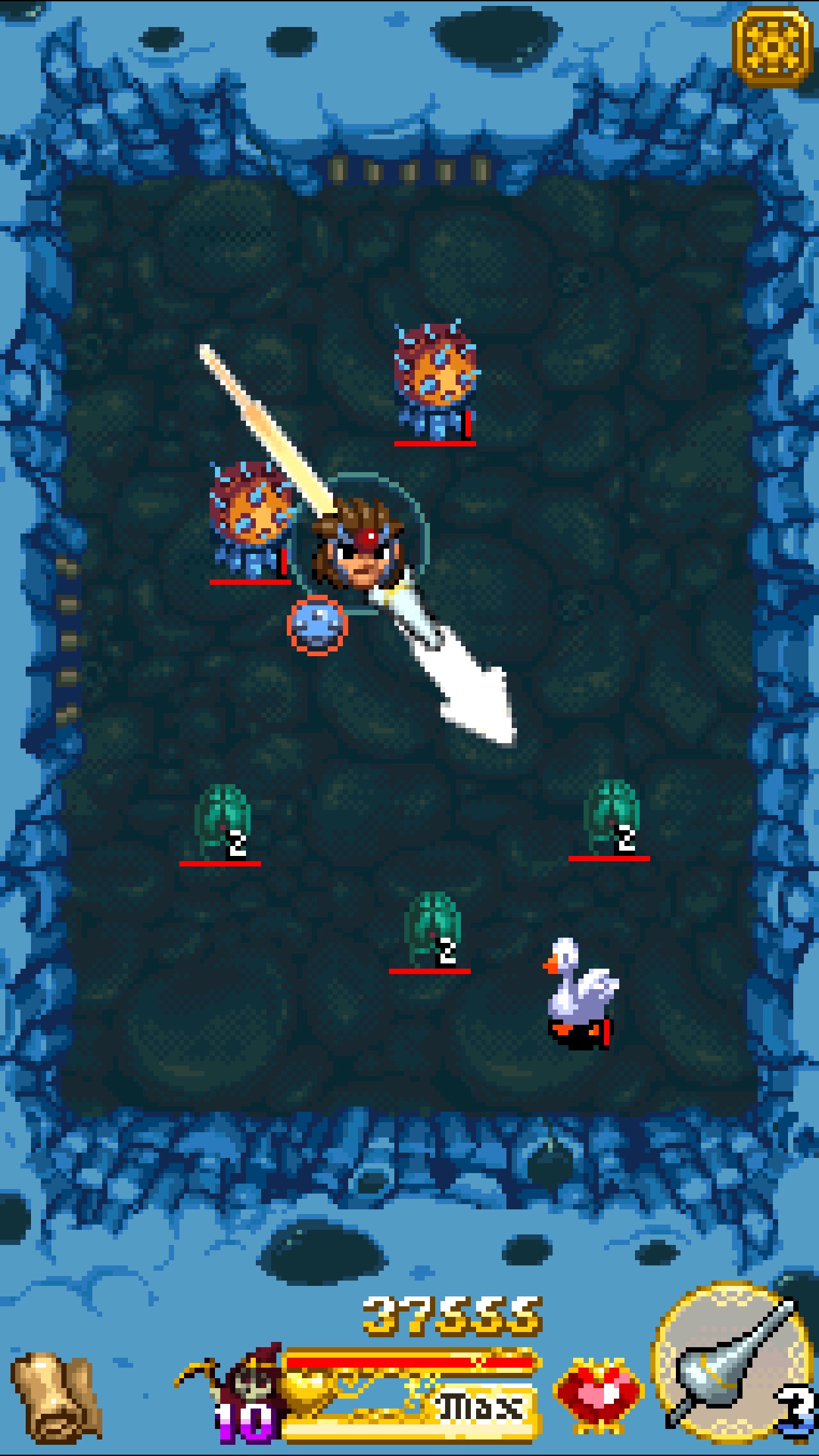 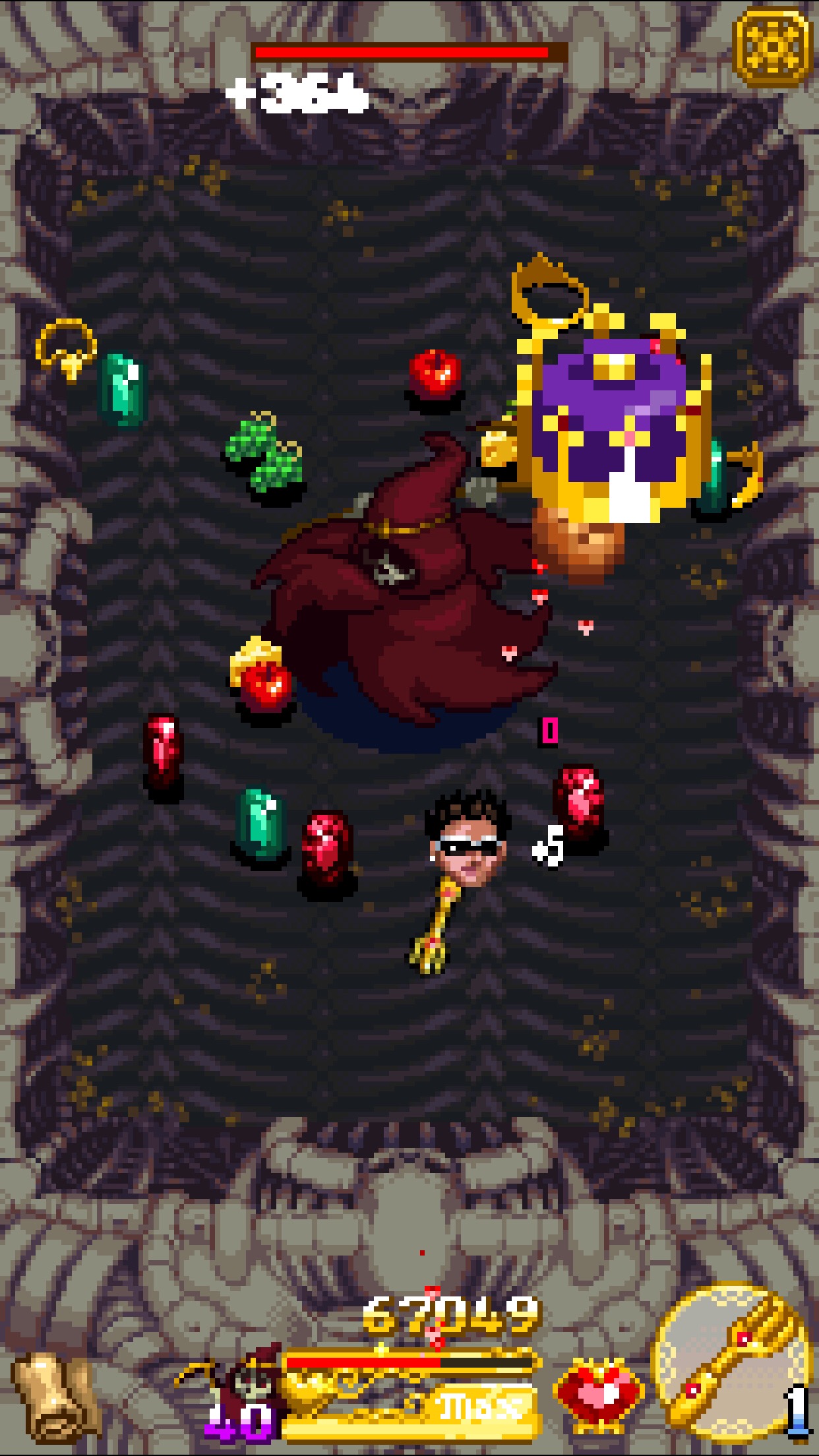 The game features two modes. In Arcade Mode, you take your chosen hero through dungeons composed of randomized rooms of enemies, culminating in a boss battle that leads into the next stage. Each of the characters has their own ending in this mode, and it’s pretty fun to play through with all of them. Endless Mode is basically what it says on the tin. You’ll choose a character and battle room after room of enemies, flipping a coin after each one to see what kind of challenge you’ll be tackling next. Your goal here is simply to get as far as you can and rack up a big score. The core gameplay doesn’t change much between modes, but your overall approach will likely be different.

If you’ve played Monster Strike, the gameplay mechanics should be quite familiar to you. Your character is represented as a ball and placed into each room. By pulling back on the screen and releasing, you’ll launch them like billiard ball around the screen. Your aim in each room is to defeat all of the enemies, but you’ll need to be careful. Enemies will hit back every so often, and stages frequently have traps that can damage your character heavily if you touch them. Early on, it’s easy to make your way through room after room, but as the game progresses, you’ll need to adopt better strategies than simply launching full tilt at the nearest enemy every turn. You’ll need to consider the path your character will take and where they will end up. Choosing the right amount of power and and the correct angle becomes vital. 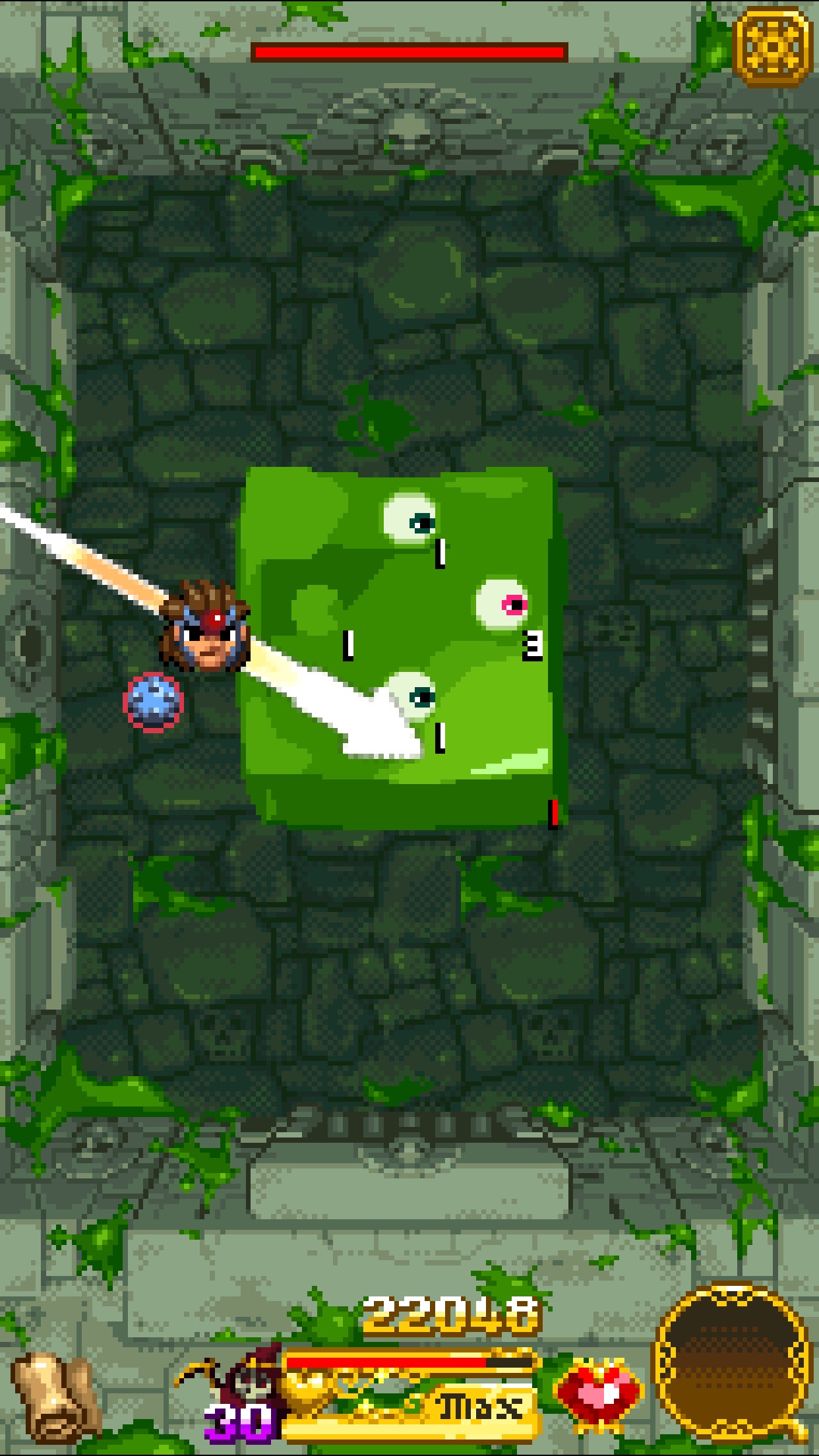 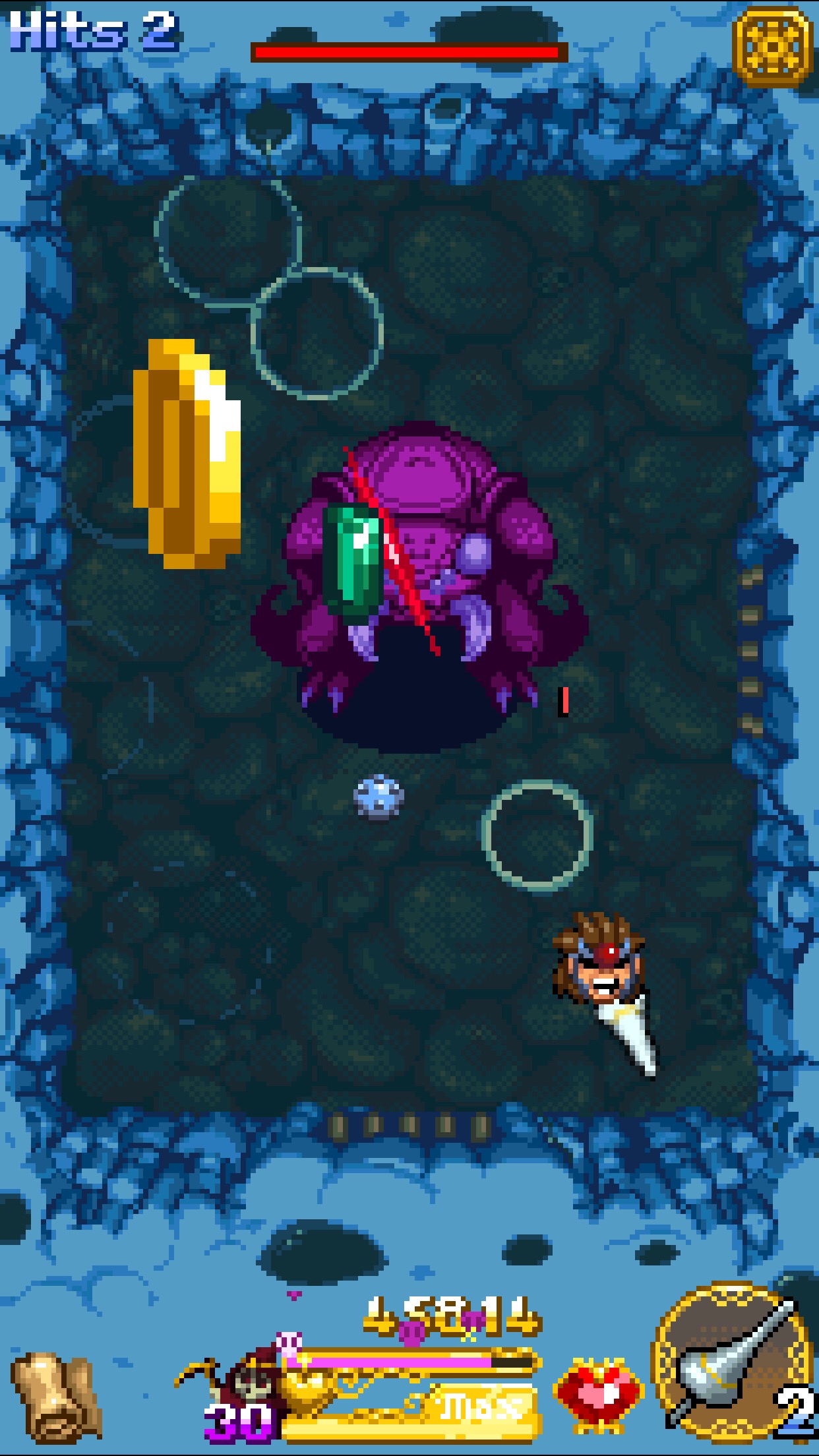 To developer Pixel Licker’s credit, they’ve absolutely nailed the feel of Monster Strike. Shots behave as you would expect them to, and just firing your character off feels good. They’ve also added a number of things to the formula. For instance, you can parry enemy bullets by tapping at the right time, preventing you from taking damage while adding to your score. Also new is the Aura meter, which fills up as you deliver damage and parry attacks. The higher the meter level, the better the treasure you’ll receive from hitting enemies. If you max out the meter, you’ll gain access to your character’s unique ability. Rather than working like Monster Strike‘s one-use Strike Shots, these special abilities stay in effect as long as you keep your Aura meter maxed out. Taking hits reduces the meter, in case the HP loss wasn’t enough incentive to stay out of trouble.

You’ll occasionally find weapons and items in treasure chests dropped by enemies. You can choose to use these before any turn to add a special effect to your attack. A lance will allow you to pierce enemies unimpeded, for example, while a blue potion will encase any enemies you touch in ice, freezing them for a few turns. You can only carry one of this type of item at a time, and they have a finite number of uses. Juggling your inventory effectively is one of the keys to survival. You’ll also come across merchants now and then. They sell a variety of items in exchange for treasure. These items convey a passive bonus for as long as you’re holding them. They take up a different slot from the weapons, but you can only have one of these at a time, too. 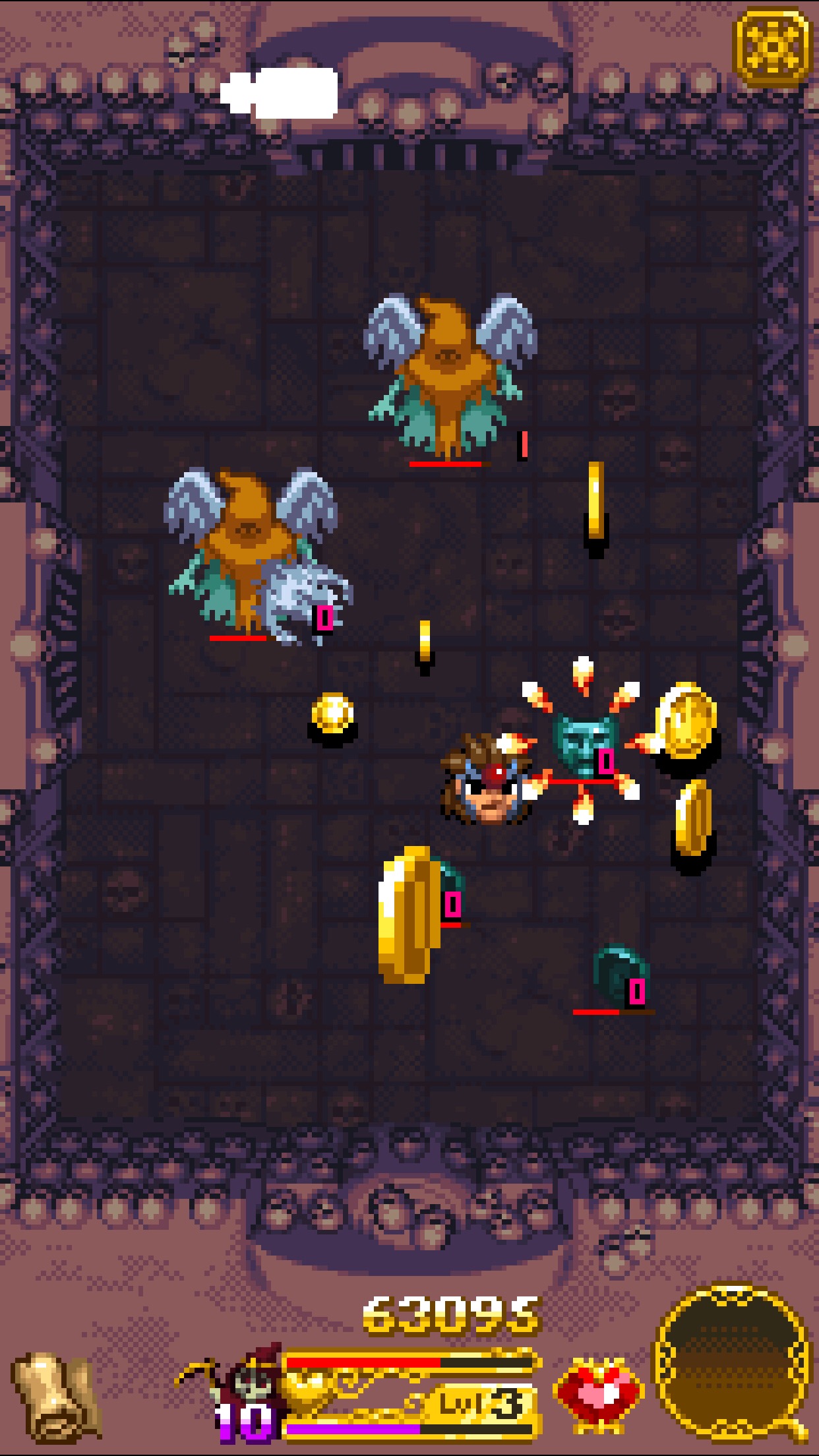 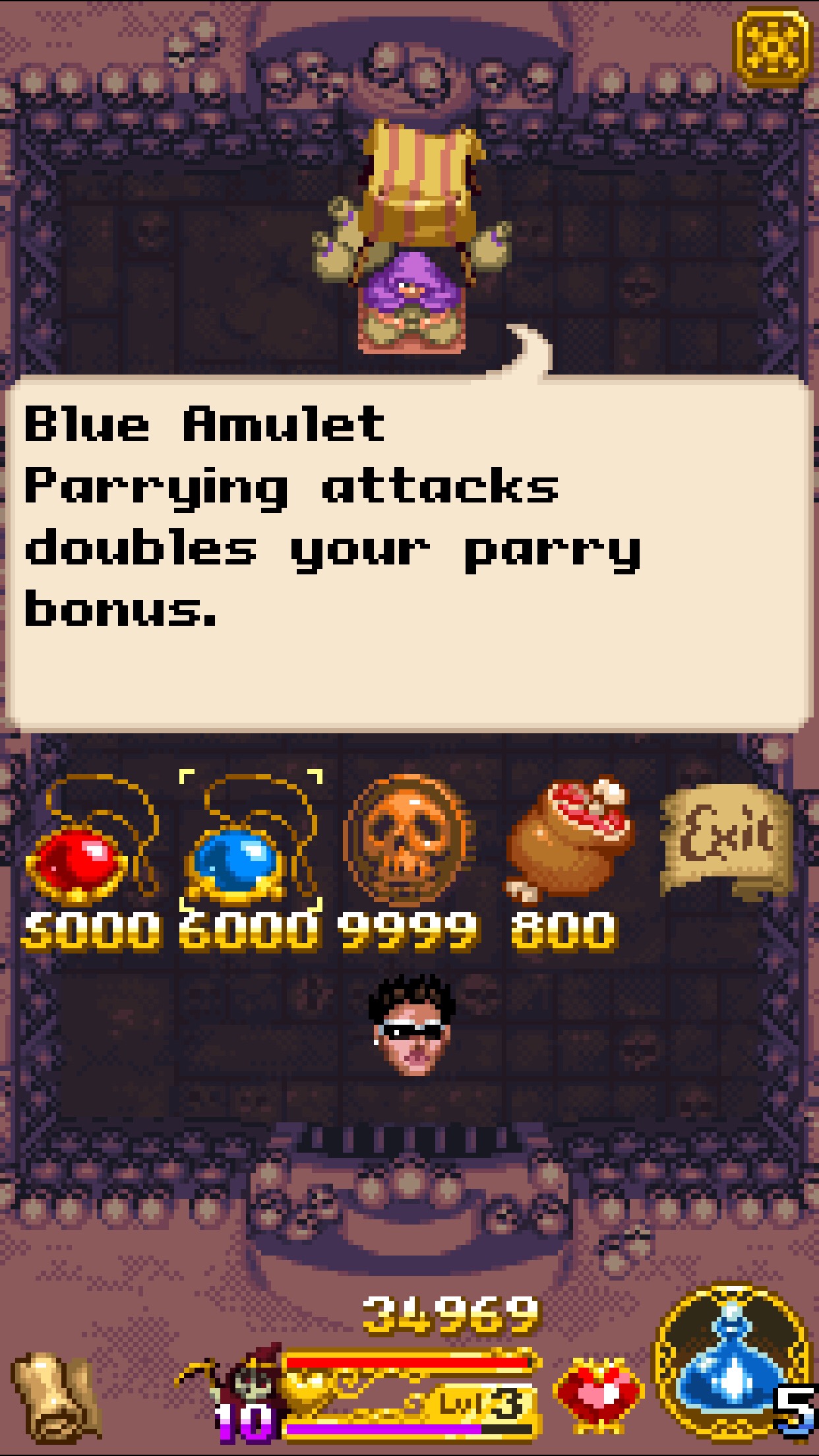 While in Monster Strike‘s set-up, you’re carried from one area to the next automatically, Treasure Buster offers you a choice of which direction you’d like to proceed in after clearing a room. Do you want to risk taking a longer route to the boss to earn more treasure? Or would you prefer to make a straight line for the boss? There are lots of treasure rooms along the way, but some of them will require you to find keys to open them up. All of the stages in Arcade Mode save the last one have a single merchant on the map, so you’ll at least probably want to stop by there. It’s up to you, though. Just make sure you have what you need to take on the boss of the stage, because as in Monster Strike, these beasts have massive amounts of HP and hit like a truck. You can sacrifice half of your treasure to come back after the first time you die, but beyond that, if you go down, it’s for keeps. Unless you’re carrying a particularly expensive item, that is.

These little pinches of rogue-like elements gel nicely with the arcade-style gameplay of Monster Strike, lending Treasure Buster a feel of its own that works well. With actual endings and a lack of things like team building and collection elements, Treasure Buster is ostensibly a better pick up and play experience than its inspiration. Yet, while that game segments its dungeons into brief, closed hops of five or six rooms at most, Treasure Buster‘s larger maps mean that you’ll probably want to set aside a little more time for each session. If you have to leave partway through, you can of course resume your game when you come back, so it’s not as though you have to play through the whole thing in one go. It just feels better to do that.

Without all of the free-to-play social RPG baggage of the game it’s aping, Treasure Buster ends up coming off more like a weird, vintage arcade game, like something you’d find tucked in the corner of a dark arcade, behind a Gauntlet machine. It looks and sounds the part, too. Colorful, detailed pixel art meets a genuinely great chiptune soundtrack to give the game a presentation that differs considerably from Monster Strike‘s clean, slick approach. Please take note that this is yet another game that ignores your device’s mute switch. You might want to fire it up during boring meetings, but you’re the one who is going to get busted if you haven’t already turned your volume all the way down manually.

While I doubt I’ll be playing Treasure Buster as long as I played Monster Strike, it’s an interesting spin on one of Japan’s biggest hits in recent years. Particularly for those who have little interest in going down the social RPG rabbit-hole, it offers a lot of fun for an absurdly low price, with no IAPs, timers, or anything like that to impede your progress. That said, without things like co-op multiplayer, team-building, or special time-limited events, the gameplay can get repetitive quickly. It’s enjoyable enough to sustain several playthroughs and some mucking around in the Endless Mode, though, and for just a buck, it’s hard to argue with that.