Last year, we were treated to a pair of excellent shooters by Japanese indie developer Masayuki Ito. Titled .Decluster (Free) and .Decluster Zero ($4.99), these shoot-em-ups combined a unique visual style with tense bullet-hell action. The scoring mechanisms largely surrounded the ability to cancel enemy bullets. The more bullets you canceled, the more points you would earn. This encouraged you to use risky strategies, making for some seriously thrilling close calls. The stage designs and enemy placements in the games were top-notch, too. The .Decluster games were sold as paid games with no IAPs, and that’s probably one of the biggest points where Ito’s latest shooter, Bullet Hell Monday (Free), diverges from his previous titles. 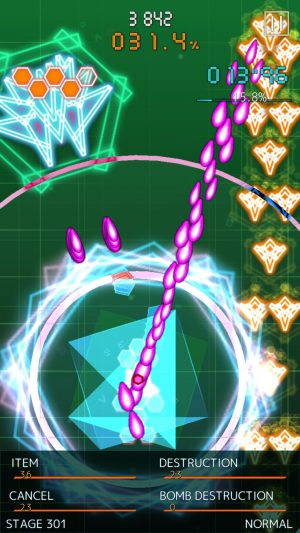 Yes, Bullet Hell Monday is a free-to-play game. It features IAPs and incentivized ads. This would be a scarier prospect if iOS didn’t already have a few examples of shoot-em-ups doing free-to-play in a relatively friendly way. Even in recent months, we’ve seen Sky Force Reloaded (Free) and Phoenix 2 (Free) offering plenty of fun in player-friendly free-to-play models. I think it’s safe to say that we can add another game to that list, because Bullet Hell Monday hits just about every high note the .Decluster games did, and does so with an extremely friendly monetization system.

Let’s talk about that monetization system first, since it’s probably of greatest interest to many readers. Bullet Hell Monday, in its fully free form, gives you access to all of the stages of the game and two of the ship types. You’ll have to earn enough points to buy the second ship, but it’s not a terribly high wall to climb over. The remaining ships are only available as IAPs, with the price ranging from one or two dollars per ship, depending on which one you’re buying. These ships feature their own weapons, but I’m not sure I’d say that they’re necessarily better than the free ships as opposed to just playing a little differently. Basically, if you enjoy the game, you can buy another ship and have some new strategies to play around with. There is one advantage to owning more ship types, but I’ll get to that later.

The other support for the game is in incentivized ads. You’ll occasionally be given an offer to check out an ad. In exchange, the game will give you your choice of some upgrade points or mission points. Both of these types of points can be earned through skillful play or even grinding in some cases, but it never hurts to have more. The ad offers don’t come up terribly often, and when they do, it’s in a fairly unobtrusive way. Just a small red icon that you can tap to bring up your options. The game won’t hassle you about it if you choose to just tap those away. That’s all there is to it, really. There aren’t any stamina meters, gatcha-style random draws, or forced ads. 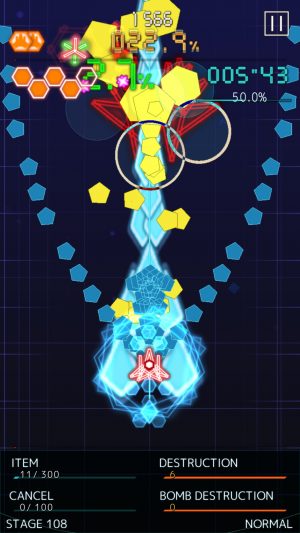 In Bullet Hell Monday, you need to work your way through more than 50 stages of vertical shooting action. It’s not enough to simply survive the level, in most cases. You can only proceed to the next stage if you’ve earned enough mission points. Those points are earned by achieving certain goals on each stage, such as getting a certain score, defeating a particular percentage of enemies, or finishing the stage in a short period of time. You don’t have to do everything in one go, mind you. As long as you eventually clear enough goals individually, you can try a stage as many times as you need to. At first, it’s a breeze to rack up enough mission points, but by the time you’re into the second set of stages, you’re going to need to come to terms with the mechanics of the game. Dodging bullets and shooting back will no longer cut it.

Just as in the .Decluster games, much of the scoring system in Bullet Hell Monday centers around letting the screen fill up with as much deadly junk as possible before pulling off a move to negate it all and scooping up the sweet rewards. In this case, you’ll be using your limited supply of bombs to turn the tides. Fire off a bomb at the right time and you’ll not only take down a bunch of enemies, but you’ll also earn a ton of items that boost your score. The stages are somewhat short, but bombs are always in fairly scarce supply. Adding more bombs to your ship is one of the costlier upgrades, behind adding additional ships and options.

Apart from knowing when and where to use your bombs, you’ll also need the usual bullet hell skills. Your screen will often be full of moving objects that will kill you if they touch your hit box, so you need to be able to spot and move to the safe areas at a moment’s notice. Sometimes going on the offensive is the best way to survive, and you’ll need to do that if you want to get decent scores and earn mission points, but if your aim is just to survive, you can do so just by being good at dodging. The game will even intentionally slow down when enough enemies are firing at you, giving you a greater chance of pulling off some miracle plays. 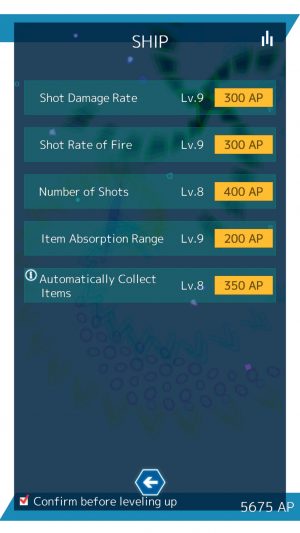 Clearing goals, even if you’ve already beaten them in the past, will earn you ability points that you can use to upgrade your ships. Until you learn how to play effectively, the rate you earn these points will probably fall behind your stage progress, leading to some of the stages feeling like brick walls. You can replay earlier stages, however, and a quick jaunt through a chapter or two of previously-cleared levels can help you get your ship up to spec. There are quite a few upgrades to buy, with more unlocking as you play. You’ll have to make careful choices about which things to buy, at least early on. Having another bomb is obviously useful, but is it better than the three or four upgrades to your main shot that you would otherwise be able to buy? Each ship has its own upgrades to consider, too. Luckily, the IAP ships also come with a chunk of ability points so that you can raise them up quickly.

The stage-based chapter mode offers multiple difficulty settings, though you’ll still need to manage to earn those mission points in any case. Not far into the game, you’ll also unlock a challenge mode. This mode allows you to test your skills on some really tough stages, with your best score recorded to compare against others through Game Center leaderboards. You won’t earn any ability points here, so this is purely for the thrill of competition. You’ll be graded based on your performance, pass or fail, so even if you’re not into competing with other players, you can at least try to better your own scores.

Bullet Hell Monday‘s visuals are bold, clear, and vector-based. It’s a step away from the unique style of the .Decluster games, but it still looks great. It’s easy to distinguish what is dangerous at a glance, even if the bright arrays of colors and curtains of bullets can get a little overwhelming at times. The bullet patterns are almost hypnotic at times. What little music is in the game is good, but I would have enjoyed an extra track or two. The game offers support for MFi controllers, but even if you don’t have one, the touch controls are easy to use. Slide a finger around to move your ship, and drop a second finger to use a bomb. Later, when you unlock the ability to switch ships on the fly, a double-tap will swap them out. It’s simple, but it works.

Fair warning: Bullet Hell Monday takes its name seriously. Even on easy, it’s going to heat up too quickly for many players. But if you’ve ever known the thrill of weaving through the tiny spaces in between sheets of bullets and emerging triumphantly, you’ll have a fantastic time with this game. It demonstrates the same careful design sense as the .Decluster games, but with just enough of its own style to make it feel fresh. It’s more than worth checking out, especially with how generous it is to free players.