Fox’s animation shows have been dominating TV for quite some time now. Family Guy, Futurama, Bob’s Burgers, American Dad, and King of the Hill all offer their own specific kind of craziness and humor. It’s not surprising, then, that Kongregate decided to develop a card game based on all five shows, and the result is hilarious, as to be expected. Yet not all is rosy in Animation Throwdown: The Quest for Cards (Free); while you’ll laugh at the silly card combos and be entertained for quite a bit with the gameplay, eventually you hit so many timers that you’ll quickly regret your investment in the game.

This is the kind of game that will divide players: some will stick it out through the timers and play when they can play, but most will get tired of having to wait constantly just to put a few (quick) matches in before running out of energy. And don’t expect a CCG that requires too much strategy and tactics since the game is too easy for too long and then ramps up fast. Overall, though, if you enjoy the characters and storylines of these shows, you’ll enjoy Animation Throwdown, at least for a while. 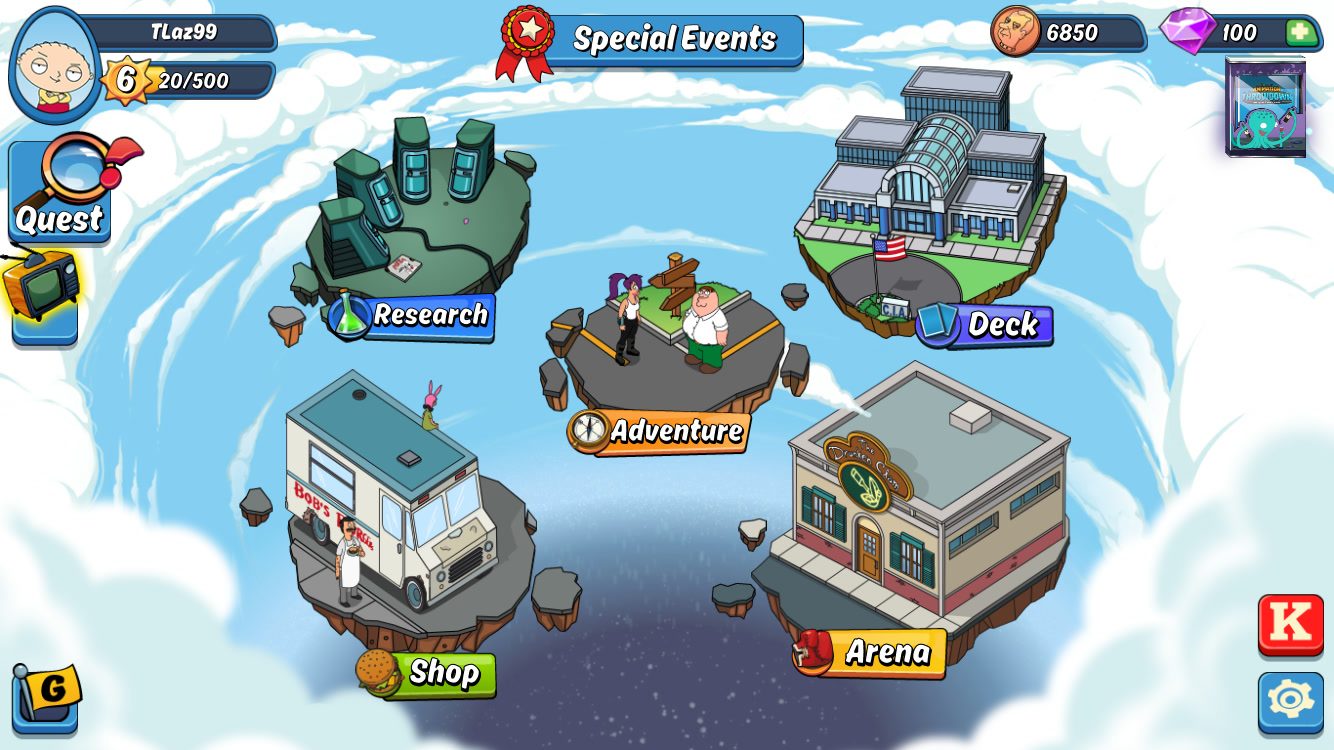 So, how does Animation Throwdown play? The game takes quite a few ideas from many other card games and creates an interesting patchwork of mechanics that while it will give you plenty to do, the seams don’t always hold together well. Cards have attack, defense, and – as you get better, more rare cards – various skills that might for instance automatically increase the attack of a random card or reduce the attack of a random enemy unit. Matches play like lane-based CCGs where each card fights the card opposite and if there’s no card on the opposite side, it damages the enemy hero. When your card’s attack is higher than the opposite card’s defense, the enemy card is destroyed and any remaining damage goes to the enemy hero. When it’s your turn to play a card, you can either play a card in an empty lane or play one on top of another card to create a more powerful combo card if you’ve already researched that specific combination.

The combo card mechanic is quite fun because of the crazy results you get when you put two cards together. In order to be able to play a specific combo – let’s say playing the Meg card on top of the Sports card – you first have to research it, and guess what? Each time you research a card, it takes time to get the research done. The early cards take just a few minutes, but as you start researching higher rarity cards, you’ll have to wait for hours for your card to be done. Timers, as you’ll see in the rest of this review, will be a very familiar friend as you progress in Animation Throwdown. Each card has many combos you can discover, and that is a huge part of the fun in this game since the combos are often hilarious and will remind you of various show episodes. 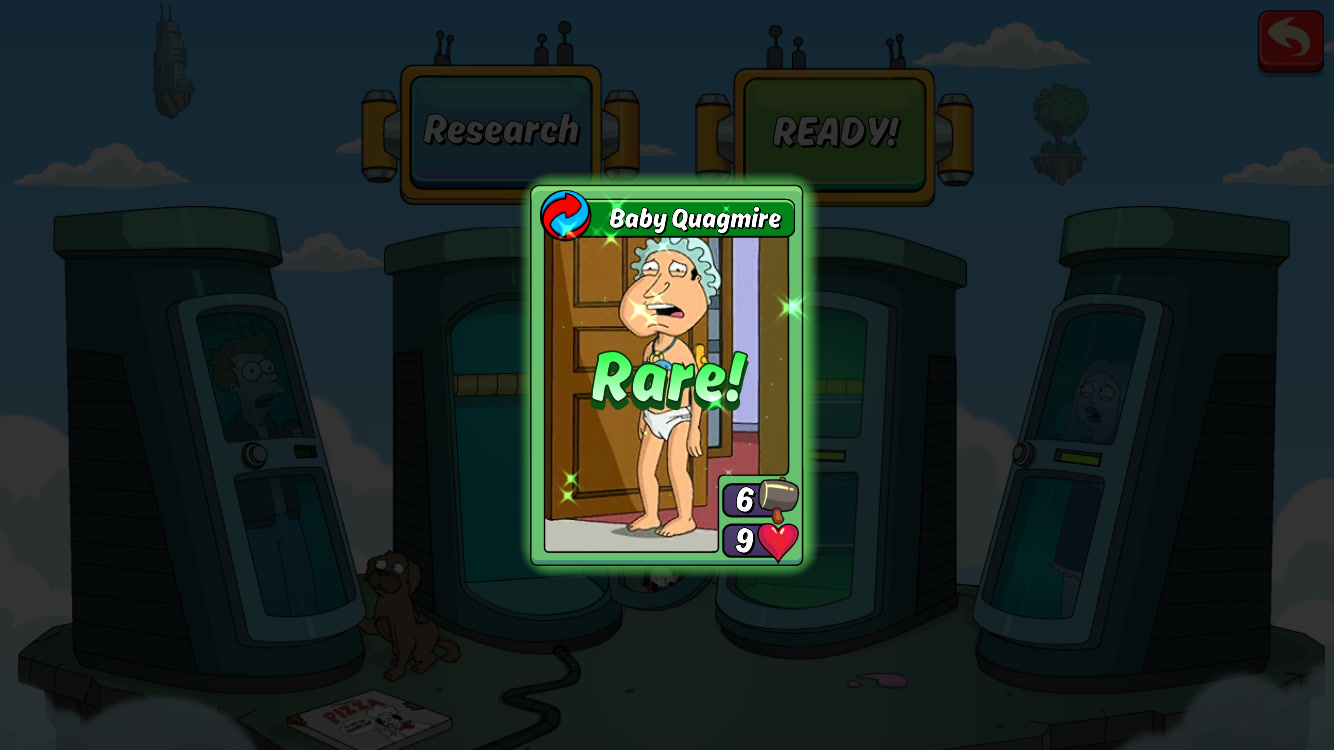 In addition to comboing, you can improve your cards by upgrading them using Power, which you get from completing quests and from recycling cards you don’t need. The upgrading mechanic is pretty simple as you’ll usually upgrade a card to Level 3 and then fuse it with another Level 3 copy of the same card to get a new, improved Level 1 copy of the same card. Then, the upgrading/fusing cycle begins anew. You’ll need to be upgrading your cards often not for the early stages of the game but for later on when things get tougher and you need cards with higher stats.

When it comes to actually getting new cards in order to research and upgrade them, you buy packs from the shop with the cheapest pack going for a 1000 and from there on getting better packs either for 6000 gold or gems. The game is very generous with its in-game gold rewards, especially early on (you’ll be hearing this phrase very often for a reason) since the daily quests are usually very easy to complete and you’ll also be getting gold quite easily but, of course, barely any gems. But you can only have 70 cards at a time in your collection, which means you won’t be able to just stockpile away without first recycling and comboing. 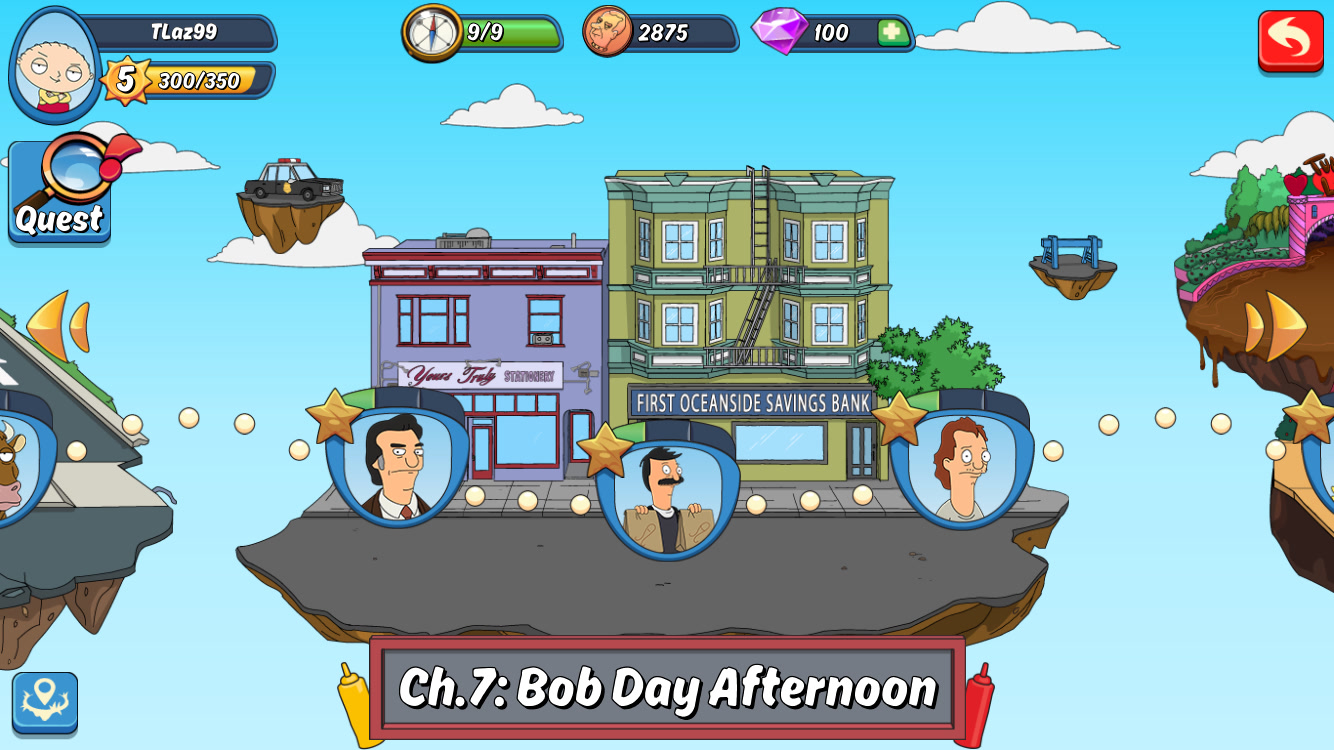 So, what do you do when you when you actually play cards against an opponent? Animation Throwdown offers two modes, Adventure and Arena. The Adventure is a campaign of sorts made up of 25 chapters split up between the five shows. The chapters have funny themes and if you enjoy the shows, you’ll get a giggle or two here and there. Each chapter has 3 stages, and you can play each stage multiple times for better rewards. Of course, playing a stage requires energy, with the later chapters requiring more energy per play. The other mode is the Arena where you play against other people’s decks but played by the AI instead of them. The positive is that there’s no waiting between turns; the negative is that it’s an AI, not another person. And, of course, it takes energy to play in the Arena, and it’s a different kind than the one the Adventure uses.

In the early stages of the game, both the Adventure and the Arena are way too easy and there’s really almost no challenge even without upgrading cards. I played about 10 chapters before losing even one match, and I think that’s by design. Same goes for the Arena; the challenge is minimal for a large chunk of it. You are also given plenty of all types of energy in the beginning, so it’s going to take a while before you actually have to wait for your Adventure or Arena energies to refill. 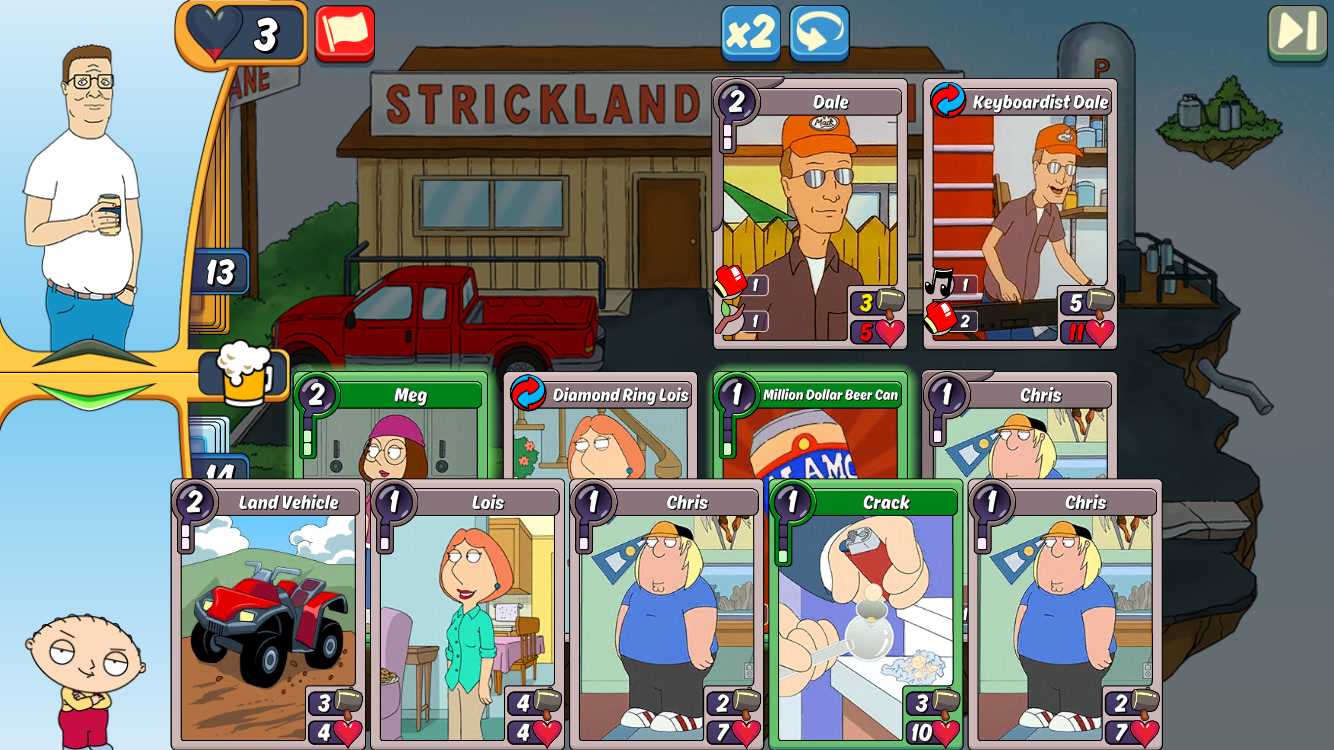 But then matches start getting harder as the opponents start playing better and more upgraded cards. And I started losing more and had to tinker with my deck more and upgrade cards more often, but I started running out of Power and couldn’t upgrade as much as I wanted to. I also couldn’t get enough coins and gems to buy better cards, which meant the AI had better cards than me. And on top of that, I started running out of energy and guess what, it takes a long, long time for the energy to refill. Put all those together and you know what it spells; paywall. As you can see in our forum thread of the game, most players describe a similar experience where the early stages of the game are too easy and then the timers kick in and you either have to stick with it and play just a bit every day or you pour in the money and play more.

The positive in this game is that there’s a lot of game time before the F2P shenanigans really kick in, and I felt that I got enough entertainment out of the game before having to deal with IAPs and timers. That might be enough for most players, especially for those of you who like to play a mobile game for a bit and then move on to other games. If you’re looking for a CCG challenge, this is not the game for you because of how easy it is early on and how random most of the skills are. Yes, there are some tactical decisions to be made like which card to play where and when to play a new card or combo an already-played one, but overall you won’t be playing Animation Throwdown to scratch your CCG itch; instead, you’ll play it for the fan service and for the giggles. That’s what I did, and overall I had fun. And then I hit the paywalls.