Based on the web series by Alan Tudyk, Con Man: The Game (Free) is a freemium building game with the unique theme of building and running a comic convention. Players start out with a tiny con  without many fans or exhibits and slowly build up the ability to hire VIPs, build better facilities and sell bigger and better merchandise. Eventually, players also unlock themed exhibits for fans of specific genres (such as fantasy or horror). I took on the challenge of building my own con for over a month, checking in a few times a day without the assistance of purchasing any premium currency. While the theming certainly gives it a leg up on other builder games, I was not impressed with the relative progress players of the game when measured against its mechanics.

As a freemium builder, one can imagine that timers and premium currency are the name of the game for Con Man and the game certainly has its share of both. Players have to wait for exhibits to sell goods (earning currency and experience) and there’re plenty of timers when it comes to actually building new exhibits. Otherwise, the basic game is very familiar and basic: earn cash to build new exhibits which generate more cash while earning experience to level up which unlocks newer and better exhibits to build. Eventually you unlock the ability to hire VIPs to improve various aspects of your convention. Unfortunately, they all cost premium currency to work, which really sucks. 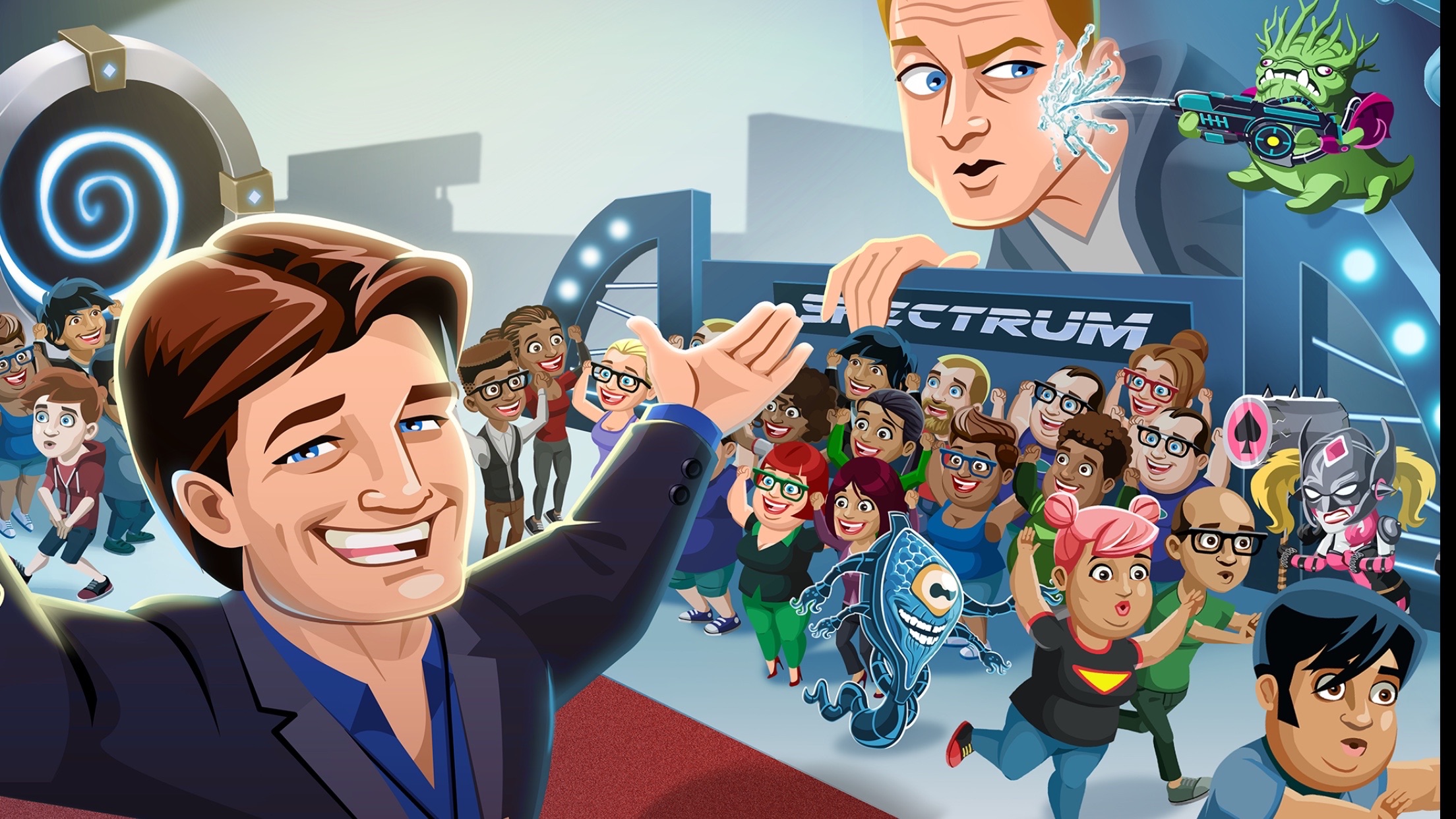 In addition to the basic timers there are also facilities timers that require you to have hired staff to deal with them. For example, taking out the trash requires janitorial services, which requires staff. Making sure you have enough staff on hand to take care of a variety of duties (which all have their own timers) is an interesting twist, and later levels unlock different types of facilities that require more staff, but in the end is just more timers.

There are some cool differences with Con Man: The Game worth talking about. The primary one is the game’s battle system, which has the player taking on aliens attacking the convention (which apparently are from the web series itself). When an alien starts attacking, tapping on the baddie initiates a battle, which has you pitting the player’s super fans against the aliens. The battles themselves are ATB-style, with active defending and collection of fan power (which powers super moves) as well as health. Winning a battle makes your visitors happy and offers decent rewards. The aforementioned super fans are earned by acquiring their fan pins, which are earned by opening Con Bags, which come in normal and premium varieties. Normal Con Bags are rewarded every few hours and serve as a decent bump to experience and currency during the day.

Meanwhile, all of the above is done with the primary purpose of keeping your fans happy. Happy fans visit more exhibits, buy more stuff and keep the freemium machine churning. If you don’t take out the trash timely, fans get upset. Place an exhibit too close to the exit? Angry fans. Not enough restrooms? Angry and dirty fans. Don’t win against the aliens? Super angry fans. True to real life, it’s pretty tough to keep the fans happy, but at least in Con Man, you get a reward for keeping them satisfied.

Play through and Guide

As I mentioned earlier, I took on Con Man: The Game, by checking in a few times a day playing a few minutes at a time to deal with timers, build more stuff, and obtain my login rewards. Honestly for my play style, Con Man wasn’t very enjoyable. Because I wasn’t playing for 5-10 minutes at a time I was missing out on some significant experience and currency early on in the game. In fact, I was also missing out on a lot of special events, such as alien battles, because those seemed to only happen during an extended play style. Instead, I got most of my early experience from the Con Bags that get awarded every 4-5 hours. Sure, the Con Bags usually had enough currency and experience to make it seem like I made meaningful progress, but I quickly learned after a few extended play sessions that I could have been progressing so much faster. 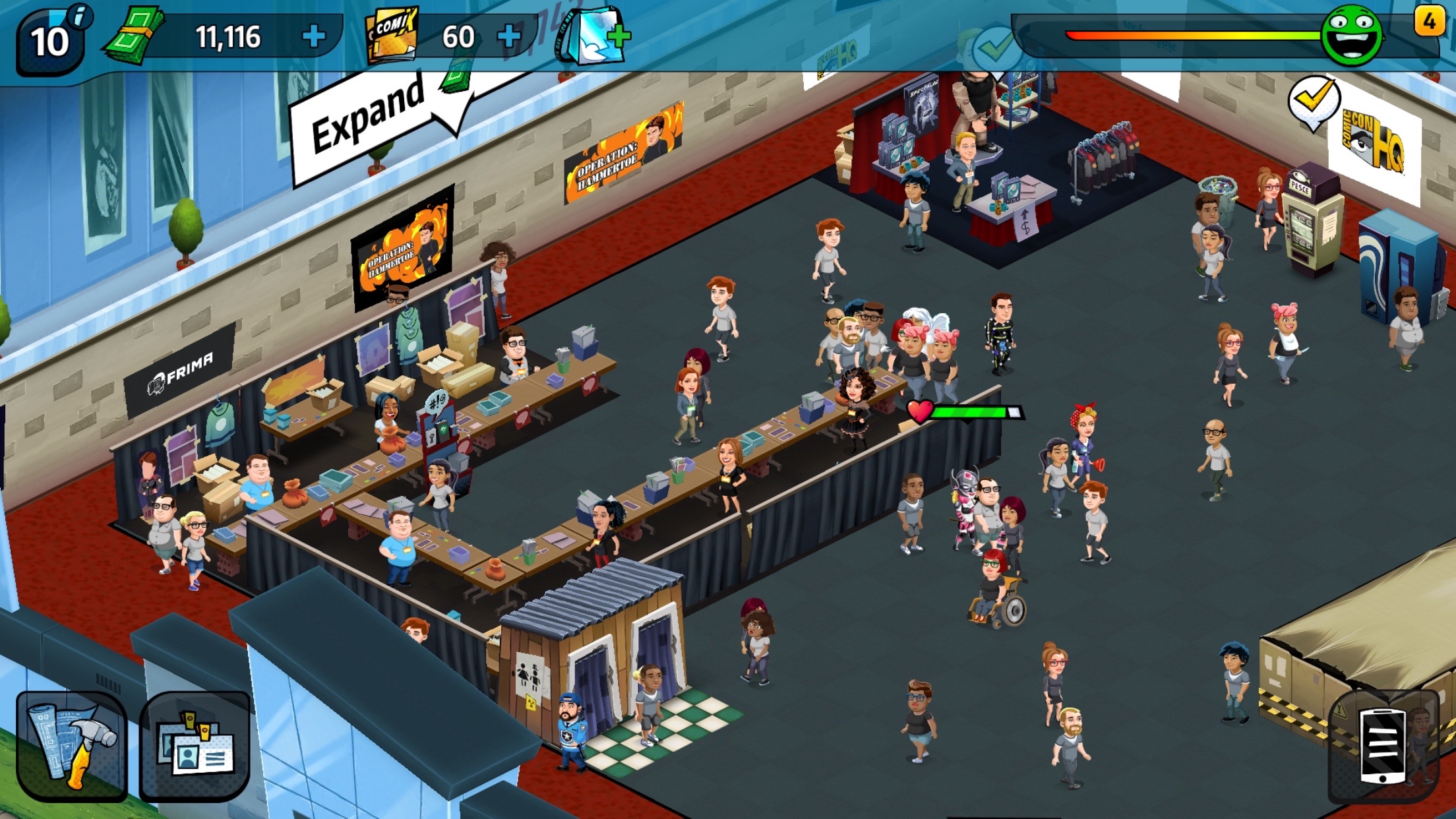 I think the reason why I was disappointed is primarily because early on there aren’t a lot of long-term timers. As I mentioned earlier, the only worth thing is the Con Bag which encourages players to keep the game open to constantly tap the shops and earn experience and cash, but for a player like me that only opened it every few hours, it took a very long time for me to level up and gain cash. Obviously, with things like the battle system and facilities maintenance there are more things to do than traditional building games, but it’s still a fairly boring experience. Even if you keep the game open for extended periods of time like it’s pushing you to do, you’re still just tapping on the same ships over and over again until you get lucky with a battle (and even then the mechanics are very basic). The fact that you’re influenced to keep the game open and expose yourself to more of the relatively boring gameplay doesn’t help, as well.

I was also a bit disappointed with the amount of things unlocked early on. Most games will at least offer you the allure of purchasing things will premium currency while you slowly start unlocking more things for regular currency. While Con Man can be applauded for not following that trope, the end result is that I didn’t really feel motivated to try and earn as much experience as possible simply because the stuff I really wanted was so far away in terms of leveling. 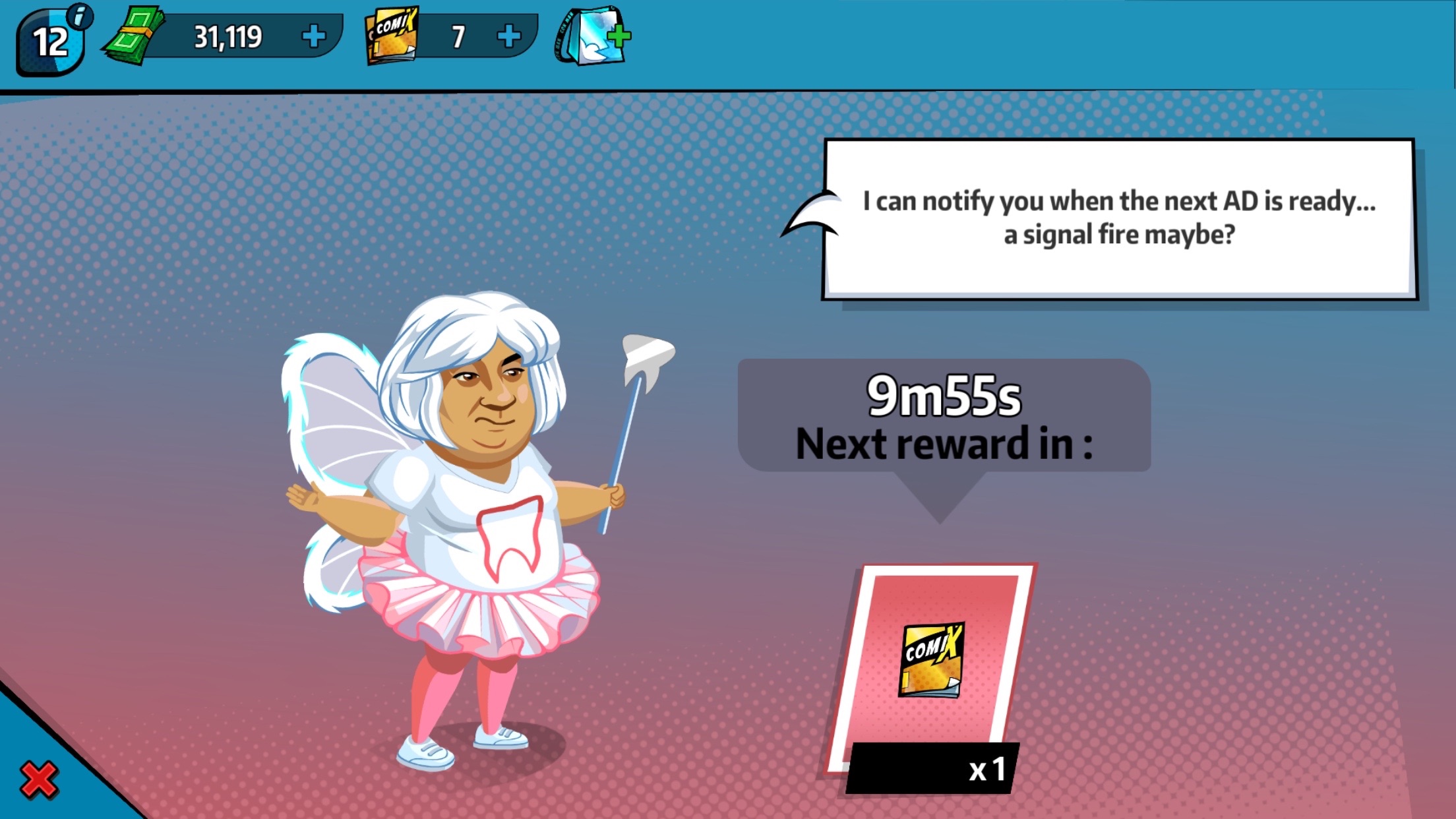 Meanwhile, I didn’t feel too much of an urge to purchase the premium currency, but that’s mainly because I didn’t develop an attachment to the Super Fans that you use to battle aliens with. I suppose if I really cared about them, I’d want to purchase as many premium Con Bags as possible in the hopes of earning pins to unlock and upgrade the heroes. However, even if I felt that urge, the gacha mechanism of earning pins would have been more than enough to turn me off to that (assuming I was looking for a specific fan). There’s an in-game ad viewer that will bestow premium currency every few minutes, I thought was good enough for me in terms of collecting the currency.

Con Man: The Game relies heavily on getting all the themes and references from the web series. If you’re a fan of that, then I think you’ll enjoy playing this freemium builder, regardless of your playstyle. Even still, I highly recommend employing a play style where you both log in every few hours to get the bonuses while playing as many extended sessions as you can tolerate in order to maximize your experience and currency (both premium and plain) accumulation. It sounds like an obvious tip, but it has to be said because occasional logging in really isn’t going to help you at all. As I kind of alluded to, it’s going to be a fairly boring grind until you get to Level 15, after which the game opens up. Whether or not you’re willing to stick with it until then is completely dependent on your love for the theme.