It’s been over three years since inkle released their adaptation of the first book in the Steve Jackson’s Sorcery! series. In a lot of ways, that app redefined what players expected from a mobile version of a gamebook. It would have been a far simpler matter for inkle to do the expected thing and do a straight conversion of the original books. They had the engine for it, and the series is well-regarded enough that it probably would have done fairly well. Instead, the developers decided to make something that a physical book would have a hard time approximating, while at the same time appealing to the fairly large overlap between gamebook readers and tabletop gaming fans. The first game mostly relied on a unique presentation and reworked battle mechanics, but the following two games brought more and more complexity to the table. Sorcery! 3 ($4.99) was so near to a full-on RPG that its roots were hard to spot at times. 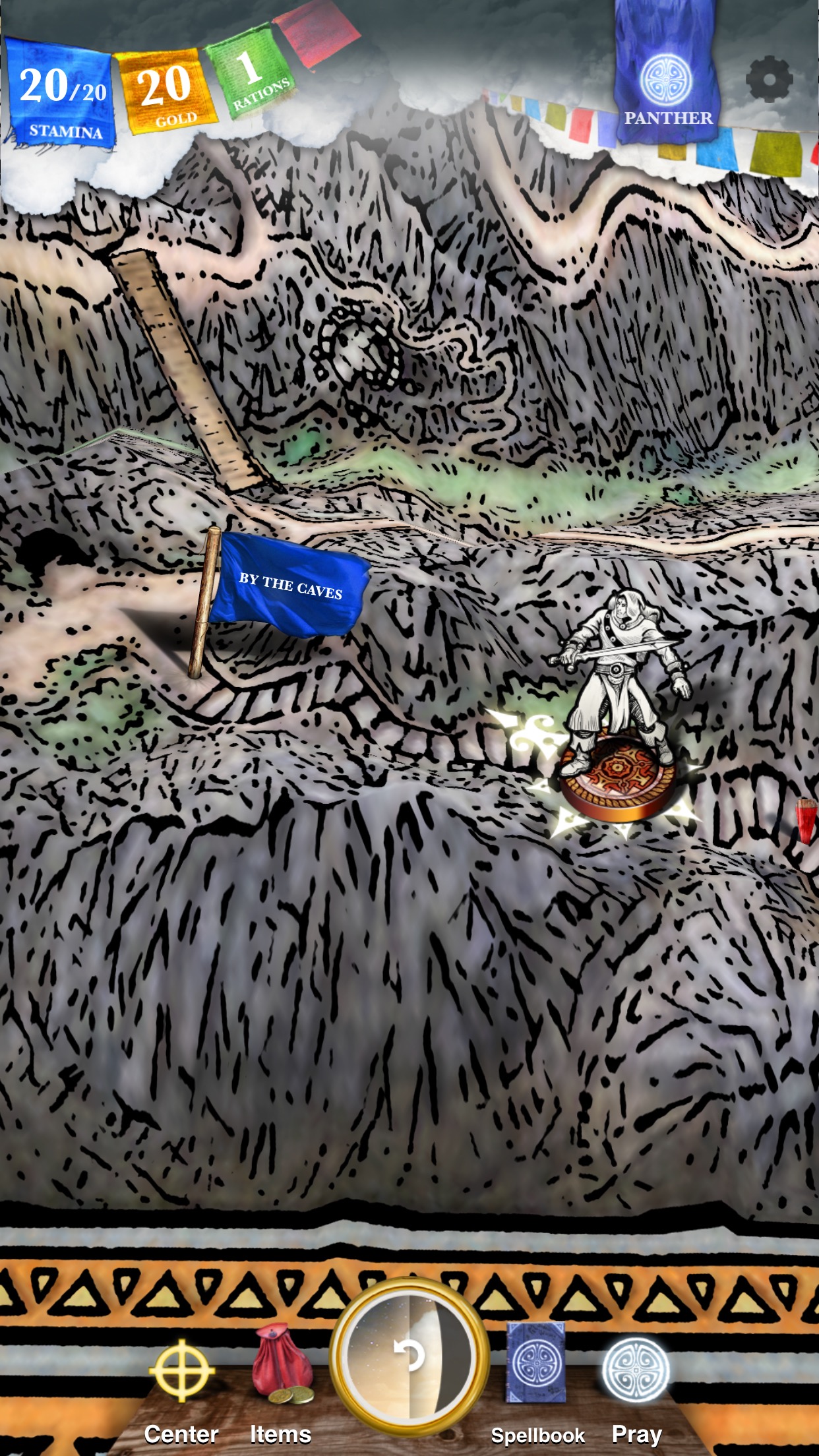 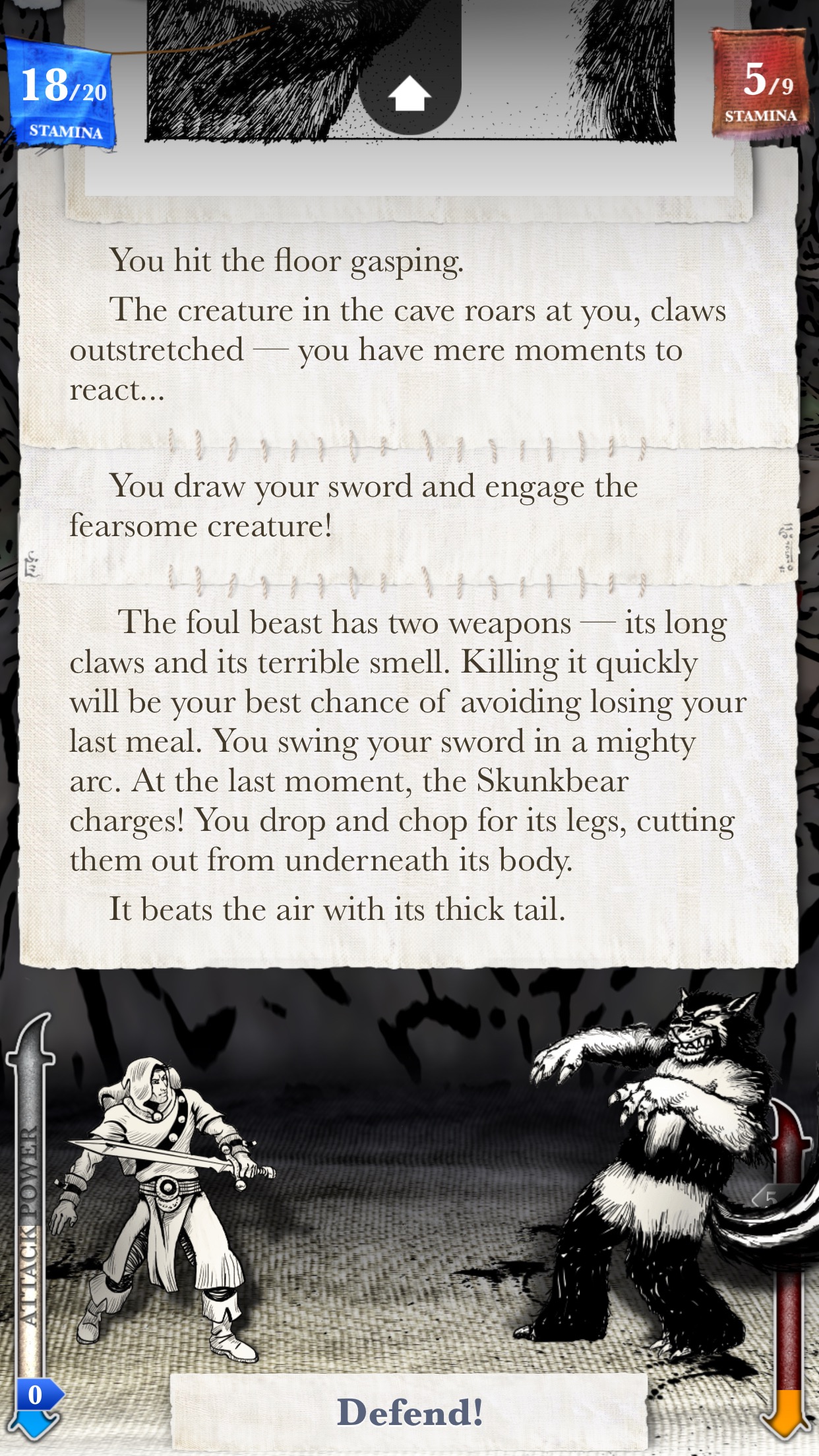 Despite the established arc of this series, Sorcery! 4 ($4.99) is not more complex than the previous game in any obvious ways. Considering how much it has to wrap up, and the sheer number of possibilities it has to consider, I don’t think it’s a bad thing that this ended up being a more focused experience than the last couple of games. This is a series that has allowed you to carry your character over from game to game, after all, and that adds up to a dizzying number of potential outcomes and solutions that inkle needed to consider. To its credit, and unlike many other games that promise such agency, Sorcery! 4 does a satisfying job of wrapping up the game according to what you’ve said and done in the past. As in the other games, you can start this one fresh if you’d like, but it’s even more rewarding than before to bring your character forward. Those doing a full series playthrough will be quite pleased with the array of options available to them in this adventure. 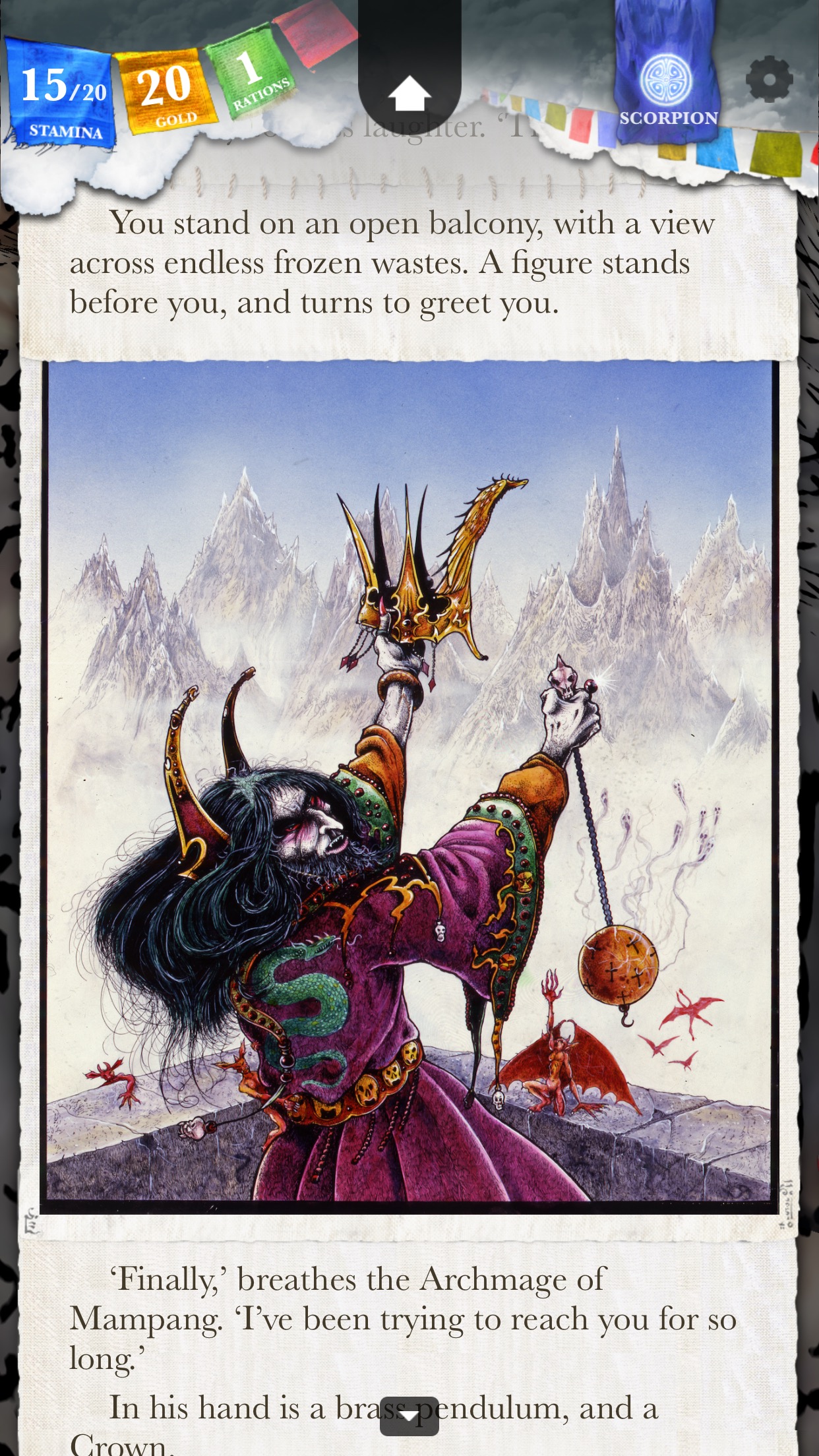 You’ve finally reached the last stage of your long quest. You need only ascend the High Xaman mountain ahead of you, infiltrate the Archmage’s fortress, and recover the Crown of Kings by whatever means you prefer. Yes, that’s all. Just the mountain on its own holds a lot of places to explore and several viable routes, though some paths are better than others, particularly if you’re coming in with a stock character. The trek up High Xaman isn’t even the half of it, though. The Archmage’s fortress and the lead-up to the end is huge, and you’re going to have to use all of your resources carefully to make it to one of the game’s many endings. Among the books, The Crown of Kings was the most difficult, and although this adaptation is quite different from the source in a lot of ways, that aspect carries through.

There are only a couple of new mechanics to come to grips with here, and I don’t want to reveal them fully for fear of spoiling surprises. There’s nothing quite on the level of the time traveling aspect of Sorcery! 3, but you’ll need to rethink how you’re approaching the game on at least a couple of occasions. One new element that I will mention is the presence of counter-spells. Since you’re going to be facing off with the Archmage and who knows what else, magic takes a bigger role than ever. It’s not enough to simply memorize the important spells this time around. You’ll also need to remember which spells work as counters to other spells. You can learn many of these counters on your journey, but sometimes you’ll just have to use your intuition and a little thinking to suss out which spell will work. If you’ve somehow made it this far without paying much attention to the spell book, it’s time to break that habit. 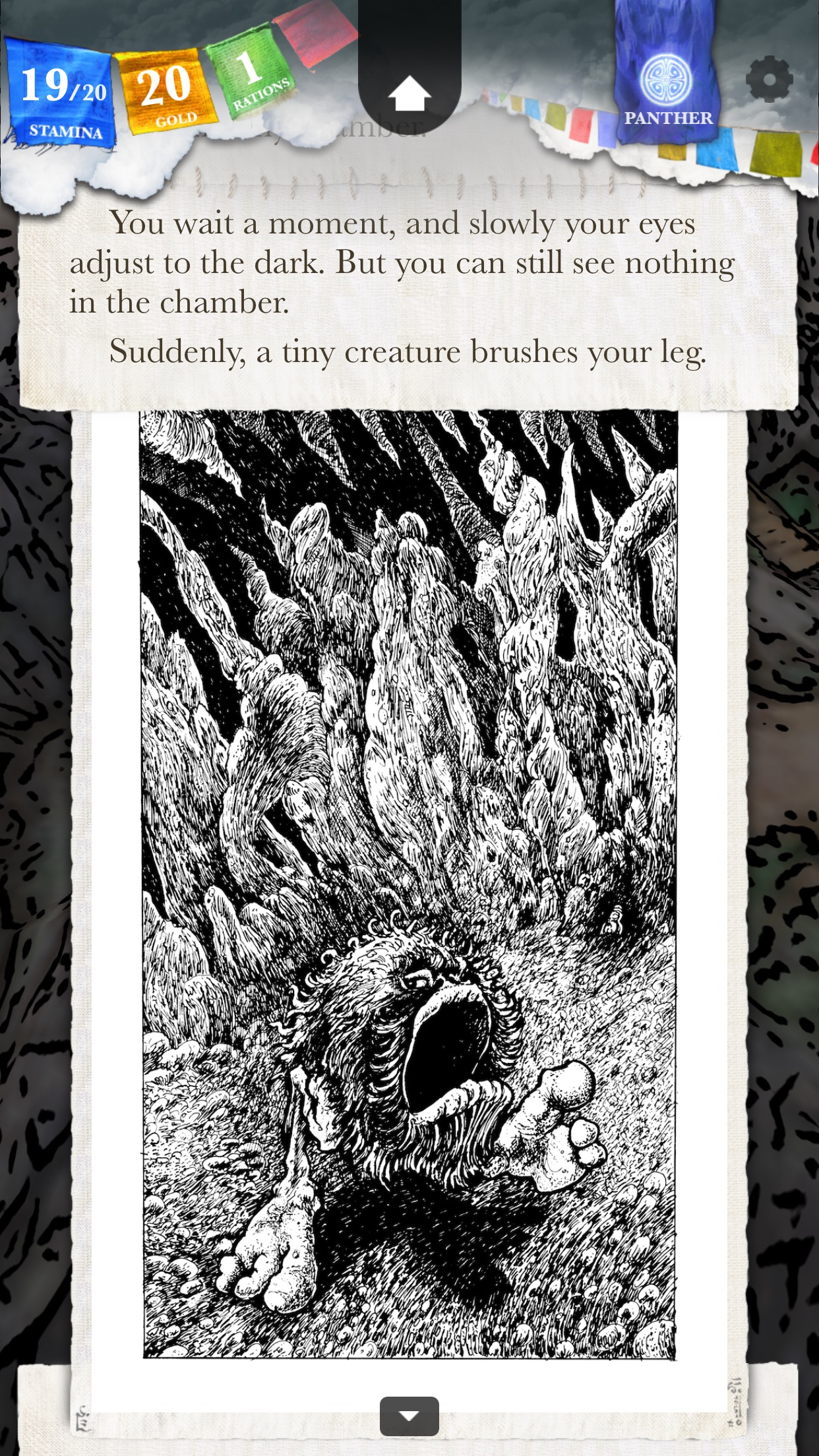 It’s a massive game, and its consideration for previous choices is commendable. That said, it also comes off feeling more narrow than the last two installments. You have a lot of freedom of movement, but your goal is both clear and established on the road ahead, so it can end up fairly linear in practice. The new gameplay mechanics will, at times, fundamentally change how you play the game, but there isn’t a lot of pizazz involved. Because of these two points, Sorcery! 4 ends up feeling more like the first Sorcery! ($4.99) than any of the others, though it plays out on a much grander scale. It’s a meat-and-potatoes experience, and in some ways, it’s a better game for taking that approach. Don’t get me wrong: as with the previous games, inkle has crammed all sorts of secrets into this game, so those who go exploring will certainly be rewarded for it. But you’re also free to just take the game as it comes and move steadily towards your goal. If you found the last game to be too open for your liking, you’ll probably be more comfortable with the more guided experience to be found here.

The battle system, while not as novel as it once was, still functions well. You have to get to know each enemy and their tells, and the game is nothing if not lenient when it comes to letting the player retry when things go awry. Usually, anyway. I’ve always appreciated how battles in these adaptations are centered around the player’s ability to make observations from the text. It feels far fairer than rolling the dice. Some battles can drag out a bit, but the game does a generally good job of making each encounter feel as dangerous or perfunctory as it should. While there isn’t really anything new to do in combat in this game, I’d be telling a pretty big lie if I said I didn’t still get a kick out of calling the enemy’s bluff and countering with a deadly attack.

Sorcery! 4 brings the series to an excellent close. As far as I’m concerned, it’s a better finish than the actual books got, and I’m impressed with the sheer number of options the player is given for reaching their goal. If you’ve been bringing your character over from game to game, you’ll probably have so many tools at your disposal that you’ll feel like the proverbial kid in the candy store. Even if you’re coming in dry, however, you have an exciting number of approaches to take to the problems at hand. Most importantly, this fourth and final chapter is a proper climax, one worthy of the lengthy journey leading up to it. While Sorcery! 4 might lack the novelty of previous installments, I can’t possibly imagine passing up on this game if you’ve already invested time in the series. Its job is merely to close this saga out with a satisfying bang, and it does that with all the care and style we’ve come to expect from inkle.