By now, we all know what to do if a large meteor is on a course to strike the Earth: throw Ben Affleck, Bruce Willis, and Steve Buscemi in a rocket loaded with a nuclear bomb, point them at the rock, and let the magic happen. They’re our planet’s ace in the hole. But what should we do if not one meteor is headed for us, but rather five? Ten? One hundred? Even if you throw in Casey, it’s not enough Affleckpower to take care of that many flying chunks of absolute destruction. Such is the nightmare scenario considered by Atomic Super Lander ($2.99), the latest action game from Crescent Moon Games and bitWeird Games.

The solution they conjure up to combat the problem is perhaps an obvious one. Instead of sending valuable national treasures like Owen Wilson into space, a bunch of little nameless guys go instead. The idea for stopping the meteors is nevertheless the same, albeit in a distilled form. You have to land your ship onto one of the meteors, plant a nuke in a specified location, get back to your ship, and hightail it out of there before setting off the charge. You’ll move on to the next meteor and Earth will be saved before teatime. It sounds so simple, and it would be, if it weren’t for the million or so things that can go wrong right from the moment you take control of the ship. 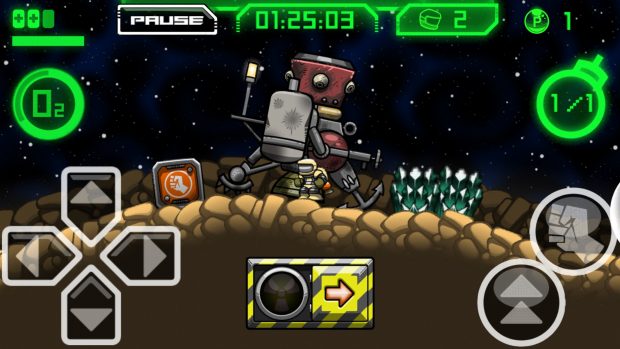 Maybe you crash your ship and wreck it trying to land? You can still carry on your mission, but that brave little hero won’t be returning home. Maybe you’ve mastered avoiding all the dangerous obstacles and set the ship down nicely, only to find there was a geyser underneath it that immediately blasts your ride home into the upper atmosphere. Oops. An alien monster could eat you. You could stub your toe on spikes a few times. Did you park close enough to the bomb to get back to your ship before the timer goes off? If you didn’t set your ship down neatly, you might have to put it upright again by giving it a few solid thwacks. And oh, even if you get through all of that safely, be careful on your way back up, because you’re not really safe until you’re snug inside the main ship.

Atomic Super Lander feels a little bit loose to play at times, but it fits the game curiously well. The ship controls work like a bit like Asteroids, except you have an eject button you can accidentally hit. On the ground, you can punch to defend yourself, pick up and throw items, jump, or boost around with your jetpack as long as your oxygen holds. The meteors aren’t terribly large, so the areas you’ll be running across have a noticeable curve to them. It can be tricky to navigate until you remember you have a jetpack. The spots where you need the arm the bombs are clearly marked. Just stand in front of them, hit the button, and you’ll be taken to a sort of Simon-esque sequence where you have to enter in a code by tapping the flashing lights. You can then detonate the explosive by hitting an extra button that appears on screen. It feels good to hit that button. 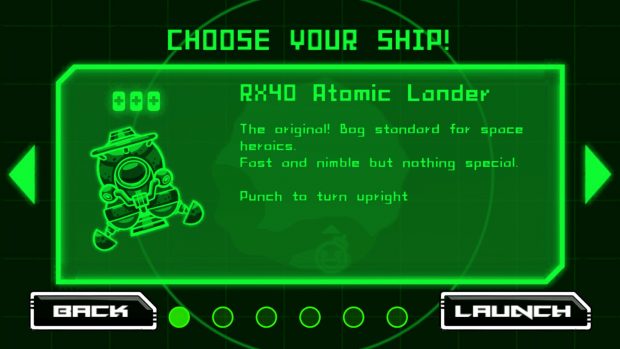 As dramatic as heroic sacrifices can be, you’ll want to keep them to a minimum. You start the game with only three astronauts, and although you can earn more, you’ll want to take good care of them. Obviously, blowing up the meteor with an astronaut on it will cost you, but you can also lose one by taking too much damage on the surface. At least in this regard, the game is forgiving. You can take three hits, and the power-up boxes scattered on the meteors often contain health drinks. More often than not, if you lose an astronaut, it will be because your ship got destroyed, cutting off your escape. There are other power-ups and pick-ups you can find, including one that lets you play a slot machine after you finish the stage to try to earn extra astronauts and other prizes.

Sooner or later, your luck will run dry, however. Your goal is just to see how high of a score you can get. You can also unlock new ships by collecting gears, and collect cards by performing certain tasks. The cards come with some fun flavor text, so there’s some value in them beyond simply serving as an achievement system. The new ships all have their own special traits, many of which will help you get farther in the game more easily. Mainly, though, this is a straight-forward score attack game, the kind of thing you would have seen on classic consoles before endings became the norm. The meteors are a little different each time you play, so you’ll never know quite what to expect from game to game, forcing you to focus on learning how to deal with situations on the fly rather than memorizing layouts. 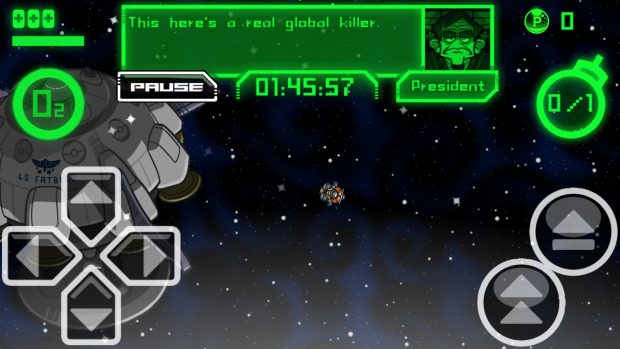 Atomic Super Lander includes support for MFi controllers, so you can play it with real buttons if that’s your thing. Otherwise, you get virtual buttons and a virtual dpad, with the ability to move them around as you like in the settings. The game also supports Game Center, with leaderboards and achievements available. As always, it’s fun to compete with other players in a game like this, and if nothing else, seeing just how low even the highest scores are makes me feel a little better about my inability to save Earth. This game is tough, but in a fun way. You might curse your luck, but you also can’t help but laugh at some of the silly situations you find yourself in. The presentation helps keep things light with its colorful comic style.

Goofy though it may be, Atomic Super Lander is awfully enjoyable. It’s one of those games where even its rougher elements help add to the overall package. So long as you can keep a good sense of humor about your inevitable failures, you’ll get plenty of laughs and thrills out of this one. I don’t know if it’s something I’ll be playing over the long term, but I’ve certainly gotten my share out of it in the here and now. All of that without even a single Aerosmith song on the soundtrack.