Vector Unit makes their aquatic racing series bigger and better in Riptide GP: Renegade ($2.99). The aquatic racing genre is a small one with few new contenders to the Riptide GP ($0.99) throne. Which is easy to see why – there’s water physics to contend with, not to mention the challenge of creating engaging courses. Yet, Vector Unit has excelled in this genre, from Hydro Thunder Hurricane to the Riptide GP games. Now with Renegade, they take the series from mobile to console and then back to mobile. And the game is well worth the wait – the formula here is still incredibly strong, with some interesting new iterations to the franchise, and some clear improvements from the console scope of this one.

Thematically, the big change with Riptide GP: Renegade is that instead of racing through water racing courses, you’re racing more through more improvised courses. The tracks include city rivers, fountains, amusement parks, et cetera. It all kind of hints at a somewhat post-disaster setting for the world of Renegade. This setup means there are some interesting courses with some new designs that sometimes have dynamic aspects to them. And you really have to be on the lookout for shortcuts in areas that look otherwise impassable. The game’s main career mode has a story line where you were arrested for illegal racing by your rival, so once you get out of prison you decide to climb back up the ranks and get your revenge…while doing more illegal racing on the way? It makes less sense than robots doing water racing in the game, which seems like a bad idea unless futuristic waterproofing is amazing.

The career mode is rather challenging, without the easing-in that previous Riptide games had. You unlock new vehicles with better stats as you go on, racing through different kinds of events. You can get stuck at a challenging race as progression is rather linear. Finishing any race gets you cash and experience for upgrades, and it’s quite possible to grind for more of both. Each vehicle has a statistical maximum in each of its categories, so at a certain point, you just have to race better. Unlocking and timing the turbo boost at the start of each race can sometimes be the key to victory, that’s how tough these races are. Learning how the game works and how the tracks operate will help to a large degree, though. Water racing games tend to be difficult to figure out because the concept is so different from road racing. 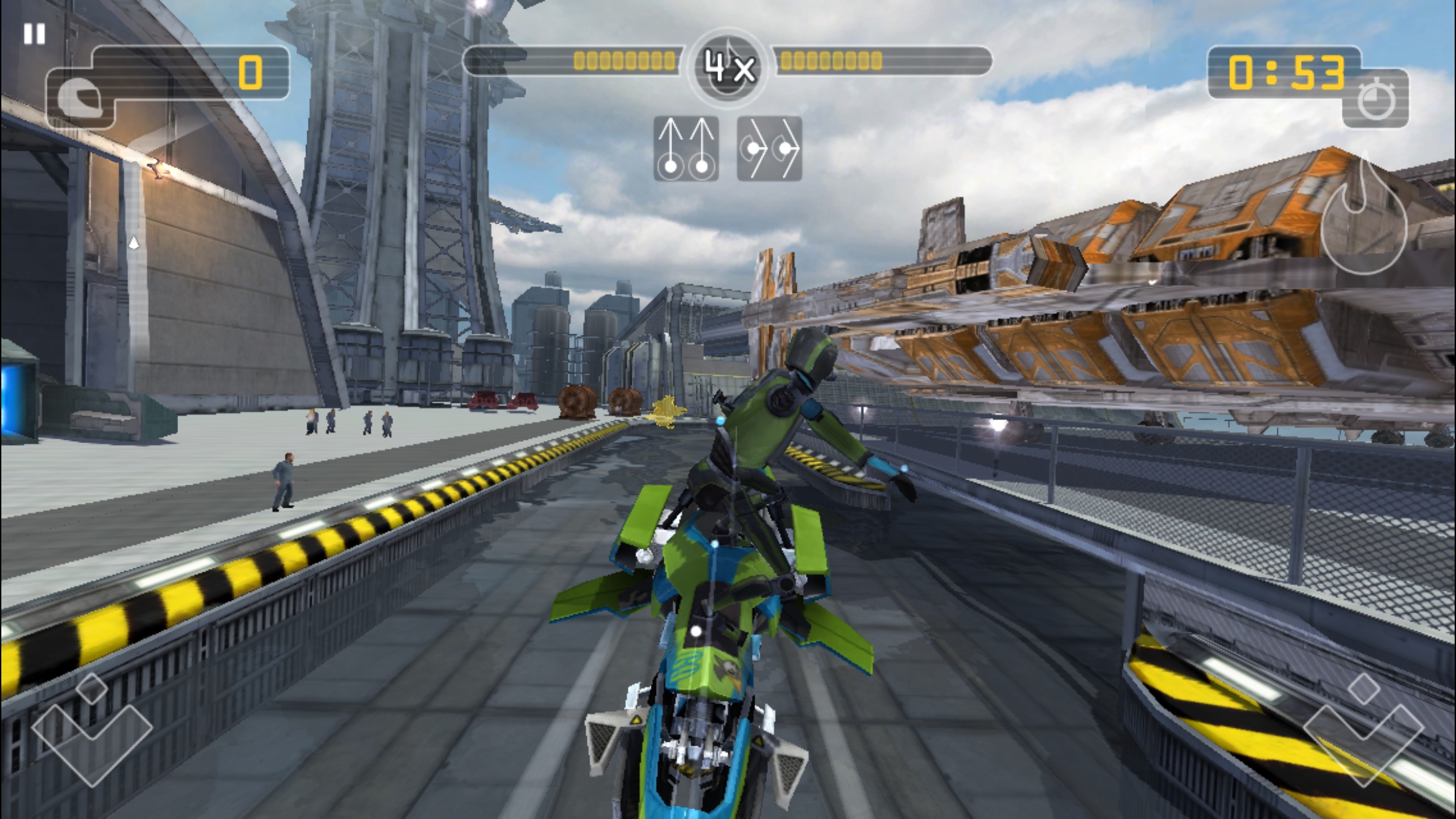 Riptide GP: Renegade boasts several fun multiplayer modes to check out along with the career mode. Note that you will need to be signed into Game Center, so if you haven’t updated to the latest iOS, you should do that to fix the Game Center bug. Challenge mode lets you race against friends’ ghosts on 9 different tracks. It’d be nice if you had more options available, like racing against random players, the best in the world, or those around your current time. Physmo’s Ghost Racer ($0.99) was particularly adept at this. Then there’s synchronous online multiplayer, which lets you race in up to 8 player matches, an increase from the 4 player matches in Riptide GP 2. Then there’s local multiplayer options in split-screen. These work even on the iPhone, but require MFi controllers for each player. It seems as if it’s not possible to play the game on iPad where two people can play on one device, with the screen split into opposing sides in portrait mode. The mode is more of a relic of the TV versions of the game, just not taken out of the iOS version because why not?

With the courses having more of an improvised feel to them, this means that the risk/reward stunt execution system plays a bigger role than ever in Riptide GP: Renegade. You need to obtain turbo from pulling off stunts, using more difficult stunts to help you get more turbo. Renegade‘s courses provide many improvised opportunities to get some air that aren’t necessarily indicated like ramps are. Finding large waves and the shortcuts helps a lot. But of course, because you can wipe out by messing up a stunt, you have to be careful you don’t misjudge any airborne opportunities. The chaotic courses mean you have to think on your feet for any chance to catch enough air. It’s an interesting dynamic that gets a lot of play in Renegade, and it’s the key defining factor for this game. 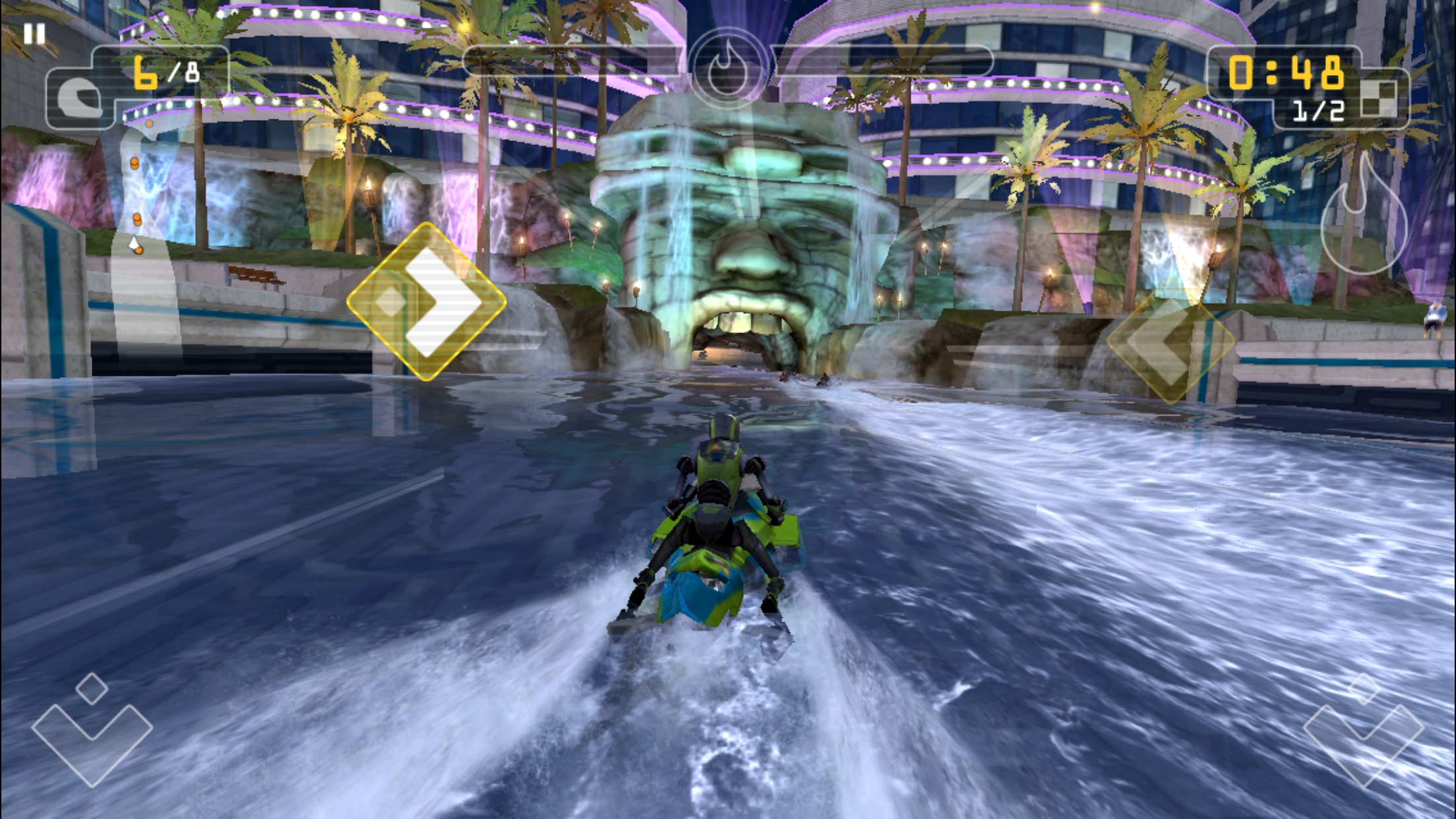 Vector Unit decided to target consoles and desktop along with mobile for Riptide GP: Renegade, and the results show. This game looks better, and the tracks feel bigger than ever before. The water effects look amazing, particularly on courses with wake effects. The detail and visual effects of things like drafting behind an opponent are more detailed than ever before. And the tracks more than ever feel like they’re part of a larger world. This game is a visual stunner in every regard, thanks to a lot of the console work trickling down to the mobile version.

In fact, Vector Unit deserves a lot of recognition for making a game that takes full advantage of iOS features. There’s MFi controller support, though the standard touch conrols work fine for this one too. Still, having that support is always welcome. Cloud save support allows you to transfer progress from one device to another with ease. That includes the Apple TV version, of which this app is a super-universal version for iOS and tvOS. Yes, this means that if you paid $9.99 for the Apple TV version, you get the iOS version, but you paid $7 more for about 3 weeks of exclusivity, and easier split-screen support, I suppose. 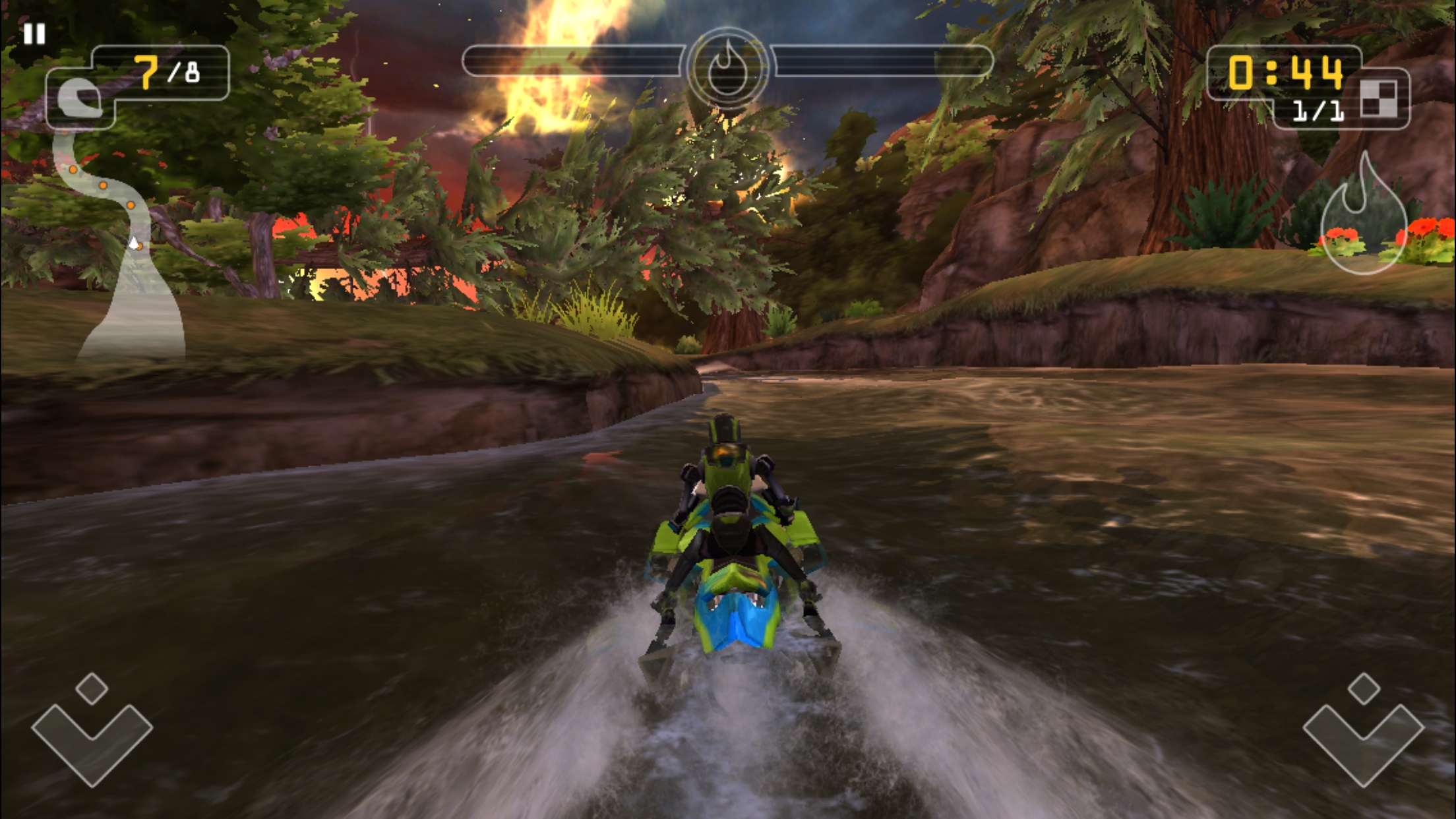 I want to say that there’s a better way to handle this pricing/platform issue, but developers do not have a good way to handle this. Apple would have to provide any solutions such as per-platform upgrade pricing, but it could be confusing to consumers. For developers, mobile game pricing in relationship to other platforms shouldn’t be a suicide pact. It’s easy for some jerk like me who has no financial stake to make a decision for Vector Unit, especially when their existing mobile audience already expects Riptide GP games to be cheap. Oh well!

Riptide GP: Renegade is more of an incremental upgrade than a dramatic improvement compared to Riptide GP 2 ($2.99), but the differences make for a better, more varied game. There’s more game modes, and the story mode in the career isn’t anything groundbreaking, but it provides a nice grounding for the progression of the game. It’s a bit more interesting than just “here’s the next level." The cops that you have to deal with are a bit annoying, but oh well! Plus, this game has no in-app purchases where previous games did. So hey, a lot of folks are gonna be happy about that. If you go back to Riptide GP 2, it’s not like Renegade ruins that game, but you can tell that Renegade feels like a superior experience.

Given everything about Riptide GP: Renegade that’s new and improved, this is easily the definitive game in the series. Newbies should go straight to this game in the Riptide series and not just because it skimps on the IAP. For veterans, Renegade‘s not that different, but it’s worth returning for Vector Unit’s strongest Riptide yet.