Arcade shooters are a perfect fit for mobile gaming, as brief sessions focused on scoring the highest possible points total are perfectly suited to pick up and play gameplay. App Store developers certainly agree, and despite the multitude of solid entries in the genre, there are only a certain amount of ways that the core dual stick shooter formula can be dressed up to seem unique and fun, and not simply going back over well-trodden territory. Hyper Blaster, the result of one man development team Combopunk, has attempted to create its own identity, through eccentric and colorful graphics and some new control mechanics that distinguish itself from the fluidity of other two stick shooters, while encapsulating the nostalgic joy of ’90s arcade titles when it launches on August 18th. 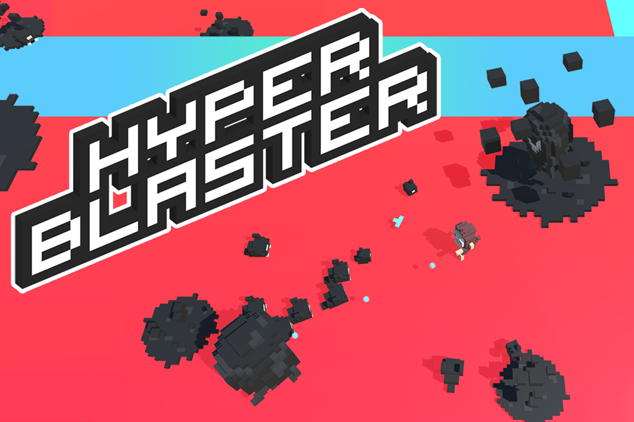 At first glance, the voxel graphics may not be a particularly fresh sight for anyone remotely familiar with the App Store, and with the game launching for free, it’s perfectly understandable for free-to-play cynics to cite titles such as Crossy Road (Free) and how Hyper Blaster may just be another off the production line. However, looks are deceiving – Combopunk has pledged that the game will only have one in app purchase to remove adverts, and otherwise will be a freely accessible arcade shooter. Furthermore, the mechanic of having to move your avatar with one linear jump across the map (rather than free analog movement that normal dual stick shooters offer) could lead to a different dimension of planning each leap carefully, which coupled with a variety of promised power-ups ensures an interesting level of depth that isn’t always seen within high score-centric games on the App Store.

There may be a few issues that can be pointed out from the pre-release material, such as whether there is any variety in the generic enemies, or if choosing different characters has more than a cosmetic effect. However, the pedigree of the developer, having worked on console titles such as Goldeneye 007 for Wii and Disney Universe, suggests Hyper Blaster will be greatly benefited by these years of experience in the industry, and should be a satisfying compromise between the modernity of touch screen devices and the compulsive twitch-based action of older consoles. For a game made by one person – and a UK-based developer, no less – I’ll certainly be checking out Hyper Blaster when it launches next week, and for a low, low price of free, it’s one to keep your eye on if you’re looking to reminisce on high score focused arcade titles of the past. Make sure to leave your impressions, and whether you think Hyper Blaster will be a blast (ahem), on its pre-release thread on our forums.