I’m a pretty big mark for The Blacklist. It’s not amazing but it’s my kind of show. James Spader’s performance elevates the standard cool and suave genius character who always makes things go their way to something pretty unique and memorable with Raymond Reddington. The Blacklist makes sense to adapt as a narrative driven detective adventure game. While that isn’t what we have here, those elements are present. Some of the character dialogue comes off as super shallow and basic, but some of it could have honestly been lifted directly from the source material. I can practically hear Spader’s voice when Reddington talks. Unfortunately, all the good things this game has to offer are standing behind an FBI level freemium firewall that even Agent Aram with his L33T Haxxor skills couldn’t penetrate. This is The Blacklist: Conspiracy (Free). 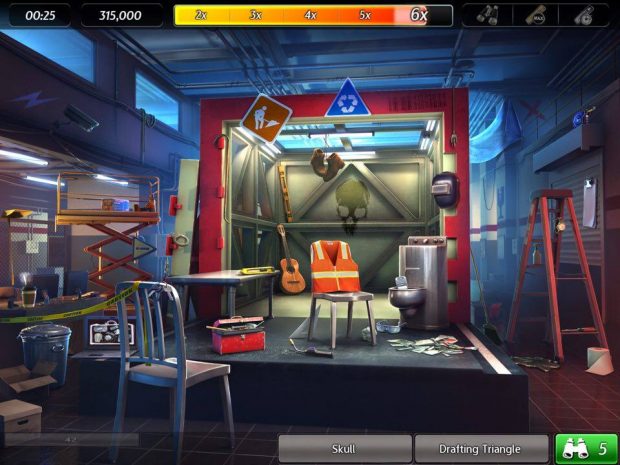 Gameloft are the purveyors of this interactive interlude. And interlude is what I would call it. Your time with this game will be brief, and probably fill the space between your time with other games. But at least you know it’ll have that extra level of polish and shine, and holy lord is the artwork in this generally fantastic. What this game is, at its core, is a hidden object game. But it’s more like a turbo hidden object game, or an arcade one. This doesn’t have that meticulous plodding pace or much of an atmosphere. For the most part, things aren’t hidden cleverly using shadows and lighting and color gradients. That does happen from time to time, for sure, but it’s more like a Where’s Waldo in which you pick a dozen or so objects out of a screen jam packed with 30 or 40.

With so many in each scenario, the objects are randomized every time, so the only way to get really good at a level is through repetition and learning the placement of everything. You’re scored on each level by how quickly you can complete it, how many hints you use, and how well you keep up your combo meter between finding things. It’s actually better when just starting out to find several items at once before tapping on any of them. You’ll run the time up, but you’ll get a better score from keeping a bonus multiplier going between items. You can earn 5 stars per level, but this is an accumulative thing. It doesn’t matter how high you score. You’ll need to play a level at least 2 or 3 times to get each star. Those stars are used within the more narrative focused adventure side of things. For each ‘Case’ or chapter, you’ll actually spend the stars you’ve earned to move the story forward. 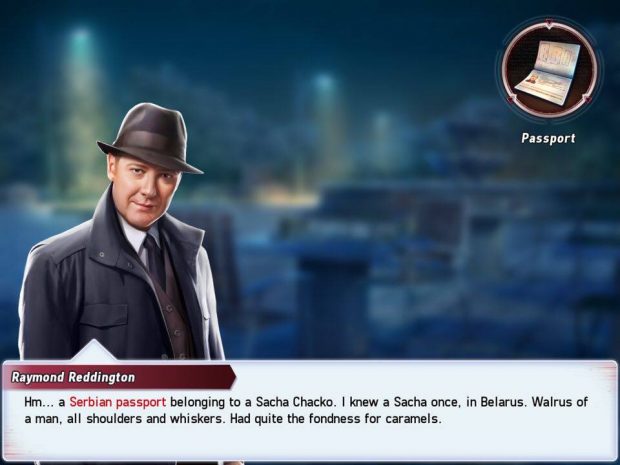 The story of the game is concurrent with that of the show. You play as a double agent working in part for Reddington as well as the F.B.I. There will be several references and nods to the early part of the show, with you investigating familiar crime scenes in the wake of Elizabeth Keen and whatever antics are happening. The first time you play a hidden object scenario there will be special one-time items that advance the story forward. Pieces of evidence that you’ll have to analyze. This involves either a timer, as the lab analyzes something, or spending a star to play one of the ten mini-games. These are pretty basic but provide a bit of variety, as you put pieces of a ripped up note together like a jigsaw puzzle, or look at 4 different film negatives to find the one that’s different. Eventually, you’ll have to decide whether to hand an important piece of evidence or an actual person over to the F.B.I. or Reddington, allegedly strengthening your ties with one or the other. The game even shows you what percentage of the population made the same choice, just like a real adventure game. This has taught me that around 60% of the player base are total squares who side with the F.B.I. But I digress.

There are even interrogation scenes in which you need to find the contradiction in someone’s story. Out of 2 things that they say. It’s like baby’s first Ace Attorney game (Free). If you select anything incorrectly in any of the mini-games, it doesn’t halt your progress, but it does lead to you getting fewer rewards. I guess It’s time to dive headfirst into the, sadly, ridiculously egregious freemium stuff. Your main rewards in the game will be cash, gems, and experience. As you level up, you’ll get bonuses of currency and some extra energy to keep you playing longer, but nothing else seems affected. Cash is used to buy boosts for the hidden object game. One that gives you extra hints, one that starts you off at max combo meter, and one that makes your combo meter degrade. You can also use cash to partake in the daily mission system once you get around to unlocking it. You can choose to ignore these if the rewards aren’t worth the cash investment, but the harder and riskier they are, the better the rewards. 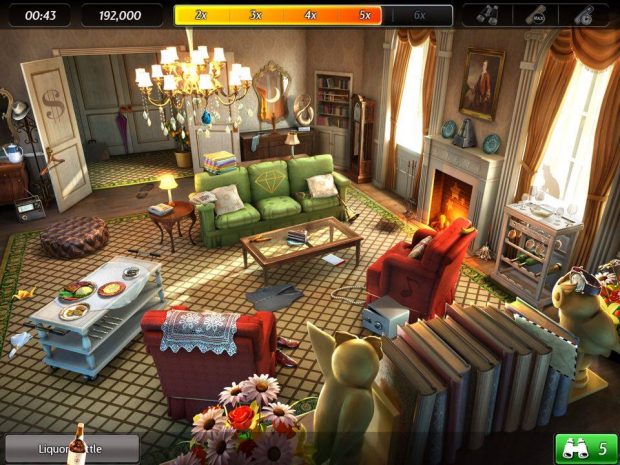 Gems, as always, are the perennial super currency of all mobile games. You use them to buy cash, energy refilling items, and to speed up the lab analysis timers. I went through the first two cases saving all of my cash and gems, just in case. And I’m glad I did, because on top of everything else, you have to wait 24 hours or more once you finish a case to be able to play the next one. This. Is. Just. Stupid. You can skip this wait with gems, and the price is affordable if you save all of your gems for these moments, but this is ridiculous. You see, as it stands, you can only play the hidden object games 5 times per session. You have 75 total energy and each session costs 15. Once you master a scenario it only costs 5, but that will rarely come into play. As far as I can tell you can’t raise your maximum energy. As an extra kick in the proverbial nuts, stars from earlier cases don’t carry over into future cases. I wanted to max out the stars in the first case to see what happened. Nothing. Nothing is what happened.

It’s just a shame, because everything else in this game is genuinely pretty great. The art and interface are top notch, the writing is pretty basic but has brief exclamation points of awesomeness (usually tied to Reddington being around), and the core gameplay is actually fun. I’m not a fan of hidden object games, but I enjoyed this spin on them. There are even alternate game modes, such as one in which you have a time limit and must collect as many objects as possible, and another that has you finding the items in a dark room with a flashlight. If you are OK with playing a game for 5 to 10 minute bursts only a few times a day, you might be OK with this. Because it’s not much of a time sink, I’ll probably keep playing it to see if it goes anywhere. I can recommend this game to you if, and only if, you are OK with freemium stuff. I will say that if you have friends to play with, you can send each other energy, which likely makes all of this much more tolerable.  If you’re interested in the idea of a fast paced arcade hidden object game or just a fan of the source TV show, it’s definitely worth a look.