Some mascots are better than others. Bubsy didn’t really work out so well. What did we see in him so many years back? Did we see anything at all, and were we just hungry for mascots? I don’t know, but I feel like someone needs to apologize. Ratchet? He’s done some fine work and has survived for many years. Crash? He’s back from the dead it seems, even if one part of his return involves a cameo in a Skylanders game.

Looking at the titular Snakebird from Noumenon Games, I was highly dubious. But after spending hours pondering the inquiry — is it a snake or is it a bird — by playing the game, I’ve decided that I don’t care. Snakebird (Free) just is, and it is great.

Snakebird was originally released on the PC, but it feels meant for mobile devices. Simple swipes will send your…thing…slithering in that direction, pinching will zoom, and that’s really it. On a meta level there’s a “back" button that rewinds a move, and a complete refresh button that instantly queues a complete restart. Your goal is to collect each piece of fruit in a level (which is not timed or scored in any way), then make your way unharmed to the goal. Sound easy? It’s not. 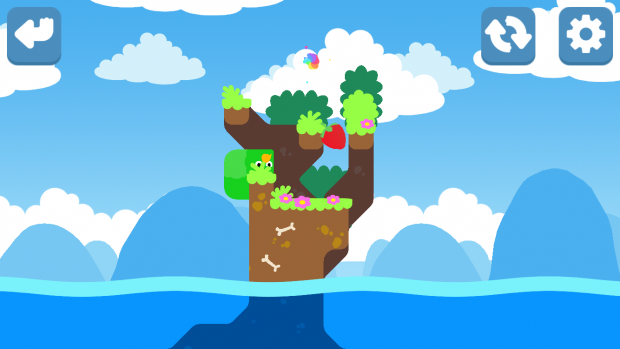 Yet, it’s  hard to get mad at the little guy for flipping on his back and completely whiffing an area when he looks so cute. That, and the aforementioned meta concessions will severely cut down on your frustration factor, even if some of the later stages are particularly devious. Like snake, additional girth by way of acquiring each pickup is a blessing and a curse. Players can choose to slink around small openings with a smaller size, but might find themselves getting stuck if they’re too large.

This simple concept funnels you into concise ways to approach puzzles, and even the earlier stages can be taxing when struggling with this mechanic. That’s mostly because you’ll need to go all out with your basic movement abilities to succeed, including learning different strategies like the “hook," which can save your Snakebird from death when moving off cliffs to chomp on some out of reach fruit. it gets even more complicated once more birds are added into the mix. Oh, and the fact that you need to completely learn new concepts from scratch, like slithering on top of fruit without eating it to use it as a makeshift platform.

The nuances in the animation aren’t something that’s easily missed too. Your character eyes fruit when approaching it, even going as far as to leer in its direction after passing it up (or alternatively, look concerned when passing over spikes or another hazard). Their tails shake when idle. It’s the little things, and the old school soundtrack only adds to the adorableness. The same goes for the detailed backgrounds, which often have neutral characters swimming about or clouds passing by. 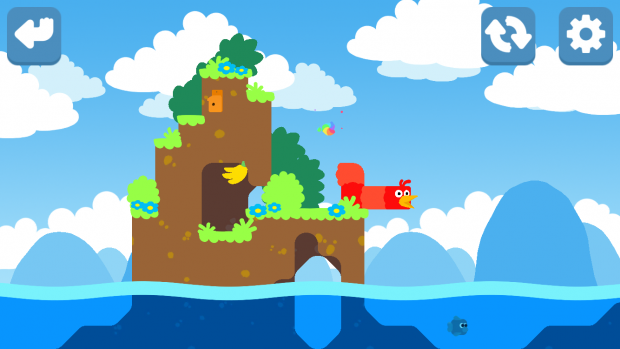 Given its cheap price on Steam, it was expected that a similar pricing scheme would make it to mobile. In short, you’re downloading a demo for free, before deciding to drop $3.99 on the whole shebang. That’s it — no ads, no IAP, or any other daily login nonsense. You just buy the premium product, and you’re set. And if it’s not clear in this case, it’s worth every penny. Even at roughly 50 puzzles to solve, it will take hours upon hours to clear them all.

It must be said outright though — this game is tough. If you’re looking for an easy breezy game to pass the time during a stressful commute on public transportation, I wouldn’t necessarily spring for Snakebird unless you’re a puzzle savant. I’m pretty big on a lack of direction for games as I feel like there is way too much handholding, but a lot of you may not feel the same way. If the demo is grinding your gears, odds are the rest of the premium levels will too.

I’m not just addicted to Snakebird, I’m in love with the beautiful art style and endearing design of the character itself. I’d love to see an expansion, a sequel, and a spinoff — at this point, I’m all in.