I’m a sucker for sci-fi horror settings, so when I saw this brutal app icon alongside colorful screenshots that really pop, I knew I had to go for this app. Wait, what’s that? And it’s a premium game with no in-app purchases? Oh Dead Shell, you say all the right things! I was excited to dive deep into the ghoulish landscape of Dead Shell: Roguelike RPG ($2.99) from the word go. Sadly, my excitement was met with a game that doesn’t really seem to know what it wants to be. It’s definitely an interesting game with a very cool premise, but that only takes you so far. 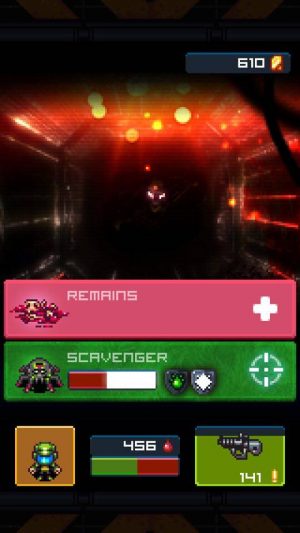 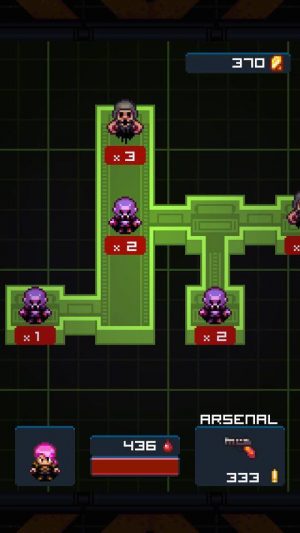 Despite having the words ‘Roguelike’ and ‘RPG’ right in the app name, Dead Shell hardly resembles either and doesn’t really scratch either itch. But I’m getting ahead of myself. This game puts you in sci-fi facilities and installations that are overrun with demons, monsters, and undead. I noticed an immediate Doom vibe before I even read the app description, which wears its inspiration on its sleeve. We are on a Doom-4 Class Planet, it turns out, called Plutonia. A very remote colony, which I guess means it’s entirely up to the 8 mercenaries that you’ll eventually unlock to save the day.

The dungeons and the enemies within them are completely randomized in this game. You can use credits to re-roll a dungeon if it seems like it will be too hard at incrementally higher prices. Once you enter, the layout of the dungeon stands before you. Your character is nowhere to be seen, and battles have a quasi-first-person perspective. Everything happens at the same time per turn. When you tap to attack an enemy, you will be attacked. The white part of everyone’s health bar indicates how much damage they’ll be taking, though it is possible to exceed that amount with a critical hit. When you kill an enemy, assuming they aren’t a ghost of some kind, their gory remains will be left behind, and you can tap those to potentially reveal items. But collecting items and reloading your gun counts as part of your turn, so don’t take any damage you don’t have to. You do automatically reload after every fight, which lead to me not even realizing I had to reload for the first 20 or so levels. 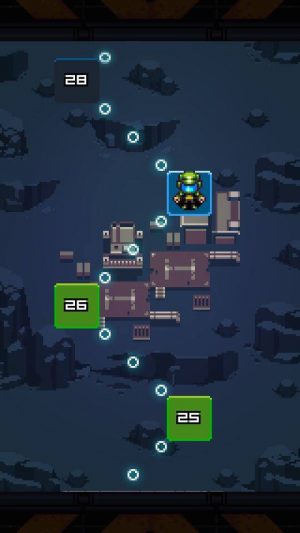 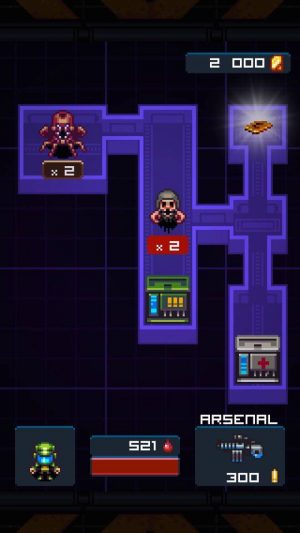 After you reach a dungeon’s exit, you’re shown how thoroughly you completed that dungeon. How many rooms you explored, credits you found, and monsters you’ve slain. Early on I made it a point to try to clear everything, but as you progress you’ll find that isn’t always possible. You’ll also find that there seems to be no penalty whatsoever for jumping right into the exit as soon as you can. You’ll miss out on some credits, which are used to upgrade your mercenaries, but it’s usually not very much. After each mission you’ll be given three random rewards and must blindly choose one. Sometimes these will be three of the same item, like the same small stack of credits, so the random generation of these needs some work.

Actually, the RNG (Random Number Generation) of the entire game needs some work. As you progress through the game, you’ll unlock chests. These are your bread and butter. You need chests to unlock more mercenaries, more enemies, more areas, and more weapons. You’ll also get ammo and credit dumps which are always nice. It’s possible to run completely out of ammo, so you want as much variety as possible as soon as possible. Eventually you’ll unlock some really tough enemies, such as the Phantom Lord and the Steel Golem. Where I am now, the only way I can possibly beat the golems is with a specific mercenary whose skill is to take away an enemies buffs and damage resistances. 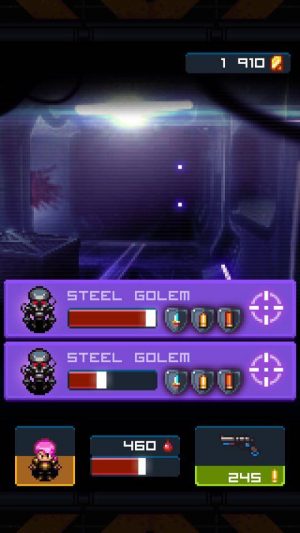 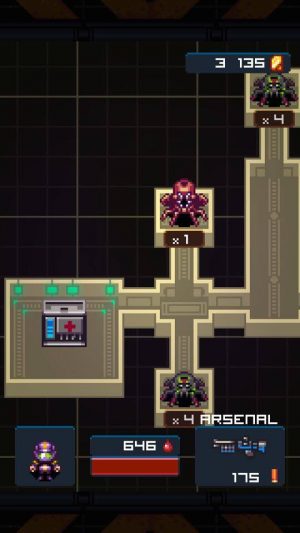 Each mercenary has three aspects of their character to upgrade. Each one can upgrade their health, each one has proficiency with a specific weapon type, giving bonus damage, and each one has a special skill with a cooldown that you can shorten. These special skills are what really set them apart. The starting mercenary can turn every item in a battle screen, including gore and other items, into a stack of 50 credits. The shotgun wielding commando can freeze enemies for a few turns. The medic wields a chainsaw and has a self-heal. The assault trooper uses huge machine guns and has a special attack that deals huge damage to all enemies in a room. So on and so forth. It’s the delta scout that can bypass an enemy’s resistances, which is just so powerful later on.

Any mercenary can technically carry any weapon in addition to their melee axe, so you can experiment. It’s possible to get health and damage upgrades for any given mercenary in a chest, so it could be a very long time before you actually unlock them all. Ammo is universal across every character and matching weapon type. You will get duplicates of weapons that you can sell for 300 credits or so. The main way to get extra chests and credits is through the quest system. This is your basic rotating 3 mission structure, where you need to kill a certain number of a certain monster, collect a certain number of credits, etc. 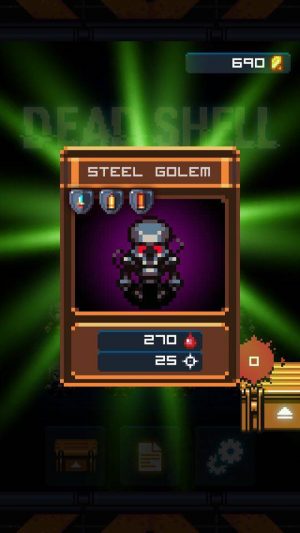 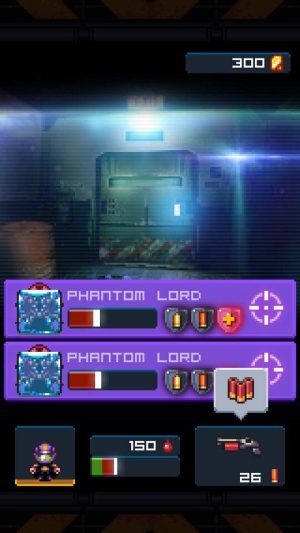 Here’s the problem with the game. There is very little sense of progression, and what progression there is takes a long time to really impact the game. You unlock random monsters, but many of them are no more a threat than any other. You unlock new areas, but these are only cosmetic color swaps and new battle backgrounds for your random dungeons. The main sense of progress comes from unlocking new mercenaries and upgrading them, but this is a slow process. It would help so much if I could see all available unlocks and my progress for them. The chests that you find give you all items in card form. It would be great to have a screen of cards that are slowly filled in, letting me check weapon and enemy stats even if I don’t currently have that weapon in my arsenal or if I’m not currently about to face that enemy. There are no boss fights or milestones to speak of. It all just starts to feel super pointless.

You have the ability to send your ship out for supplies, and upgrading the ship increases the available slots for supplies. This is your way out if you run completely out of ammo. I upgraded my ship twice and sent it out. After a 6 hour timer counted down, all I got was some ammo. I didn’t even know how much ammo. That’s my other issue with this game. It’s very minimalist, which I can appreciate, but I want more information. All communication is done through bars and icons. I wish things were spelled out a bit more clearly. You can infer everything over time and figure it out, but still. I upgraded my ship two more times, by the way. It still takes 6 hours to come back. Despite being a premium game, this sure feels like a freemium one. Timers and chests with completely randomized loot and all that.

There are occasionally randomized events. A dungeon might have been a supply cache with loads of crates, or the scene of a massacre with loads of gore to squish into items, or the scene will have been flooded with poison. Early on I found an exo-skeleton with twin machine guns that hit all enemies at once, and it was glorious, but that was over 50 levels ago and I never saw it again. This game has some shining moments, but they pale in comparison to the lack of stakes. Did I mention that this “roguelike” has no real death? There is no penalty for death. You are given a game over screen, but no progress is reset and there are no setbacks at all, except maybe some wasted ammo. This made me think of The Earth Has Fallen (Free), which was a cool looking little game that had you defend the earth from waves of aliens, but you could watch an ad to infinitely respawn with no penalty. Why even? With RPG elements that mainly involve super small cooldown reductions or an extra point or two of damage with a specific weapon, you can see why I said this barely feels like a roguelike or an RPG earlier.

I generally love the presentation of this game. I still haven’t gotten sick of that one looping song they have. The idea of soldiers and horrifying demons as chibi little pixel art characters is rather appealing, and the art and use of color is all very nice. Sound effects are quite varied too. I understand why there couldn’t be perma-death. The chances that you’ll get stuck in a dungeon with super tough mobs is just too high. This is what happens when progress is so random. Heck, you might see an icon of a lowly spider, and see that there are 3 enemies in his group, but once you start the fight he has two steel golems with him and you’re just done. There is potential here, and I don’t regret buying this game, but I’d recommend holding off on checking it out until there are some tweaks to this crazy RNG and progression.