Consider it a testament to the power of mobile that developers still want to make and release games for it, despite the challenges of selling on it. After all, when games are customary a third of their price on other platforms, it’s no wonder that games are rarely announced first for mobile. Severed ($1.99) was that exception, as mobile was a core platform for the game at its announcement. Then, it became a PlayStation Vita exclusive, before eventually being re-announced for mobile. And here it finally is. This first-person Infinity Blade ($5.99) meets Zelda type game – is a really cool experience that feels like it should have been on mobile all along. 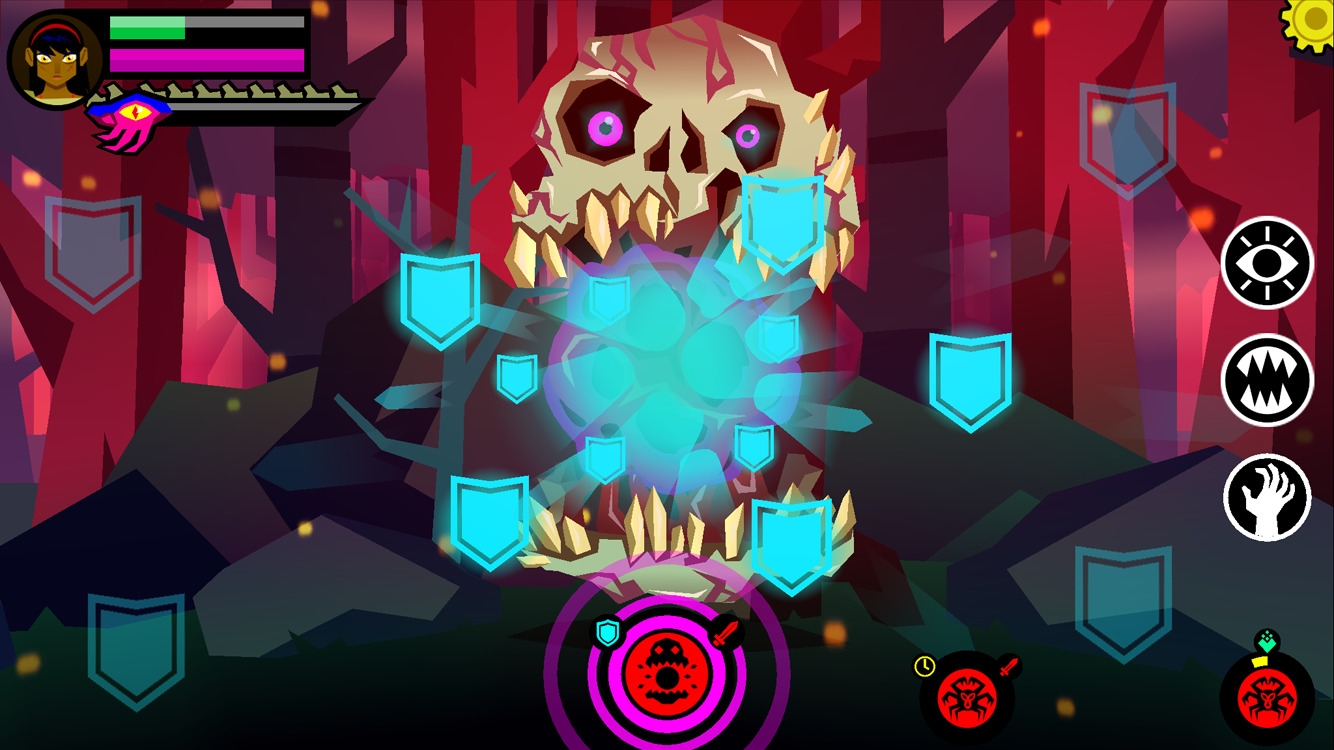 Severed puts you in control of Sasha. Sasha is having a bad day: she’s found herself in a nightmarish underworld, her family has been captured by monsters, and oh yeah, she’s lost her left arm. Don’t worry, she’s all right now! Thanks to a mysterious stranger giving her a powerful living sword, she has the ability to try and rescue her missing family. But she’s not exactly handling the stress well, as she’s taken to dispatching her foes, severing their limbs and collecting them to power herself up. Oh, and collecting heart and brain pieces to form into full sets that she can devour to increase her health and mana. Sasha might need some therapy when she’s done with her mission, because…wow.

Sasha having only one arm means that shields are out of the question, so her best defensive ability is a parry. And she’s often surrounded by enemies – typically a maximum of 4 but you’ll experience battles of up to 8 enemies at once – so it’s all about using strikes that are placed and timed well. Short swipes do limited damage, with more longer swipes doing much more damage. You also fill up a focus meter with combos of long swipes, with the meter filling up faster the more hits you get. Filling up the focus meter is the way that you get Sever mode to activate, so that when you kill an enemy, you get a couple of seconds to slash at their limbs and collect their body parts for the updates. This game is a bit macabre, to say the least. 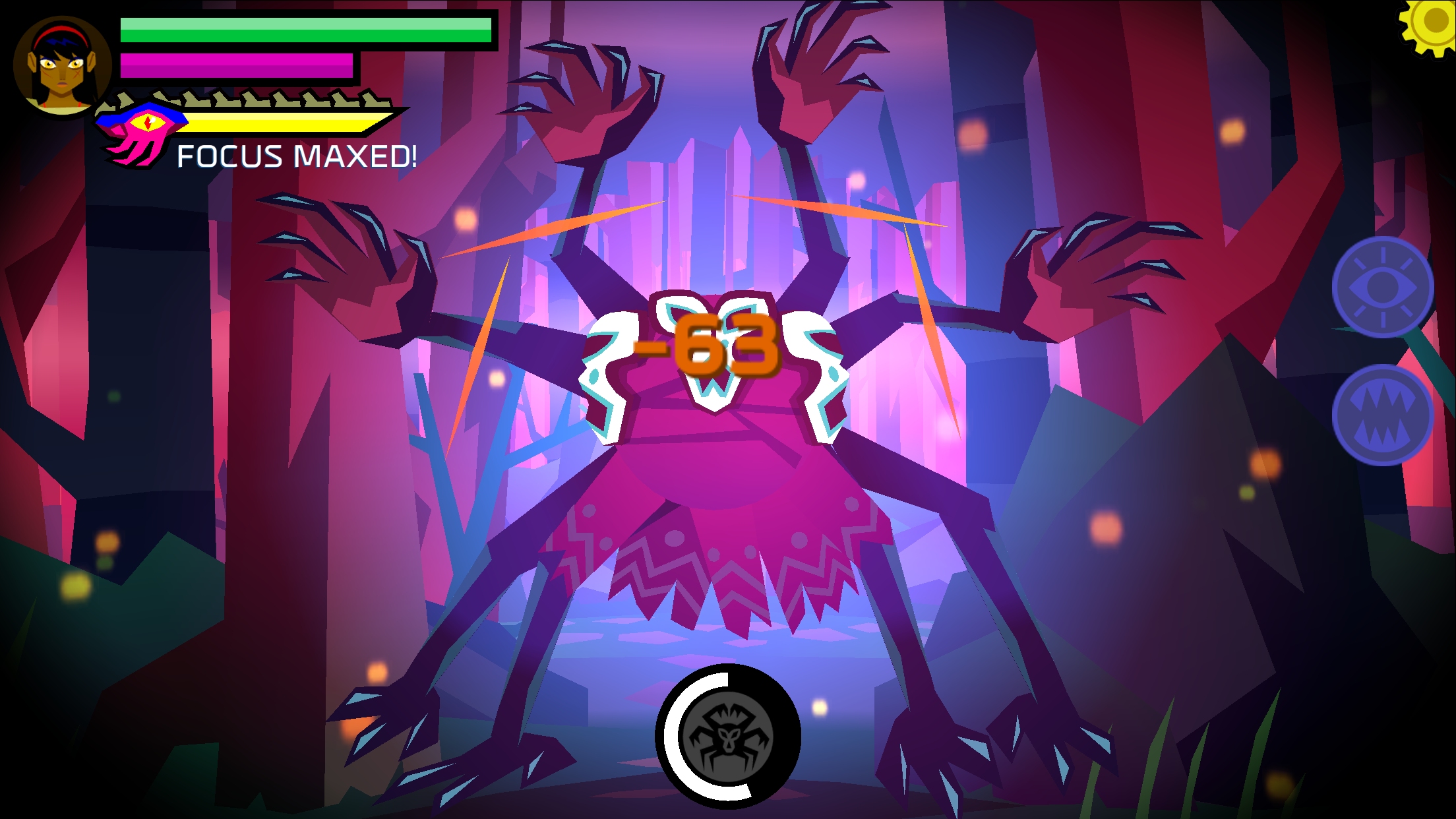 What makes Severed so interesting is that the combat is so dynamic because of the fact that you’re managing fighting several different enemies at once. You have to constantly adjust to what the potential threats are, quickly switching to parry an enemy, or to slash away an enemy that delivers a powerful blow if you leave them alone. There’s a limited number of enemy types, but the different variations on them and the mixture at any given time makes battles remain interesting. You also get abilities over time that help turn the tide in battle, such as a stun that can put one enemy out of the way for a few minutes, which helps a lot when you have other threats to deal with. You’ve probably played many of these use-your-finger-to-slice-type games, but Severed has some of the most involved and unique combat of them all. It’s best to play this game holding the device in one hand and using your index finger to attack, only using multitouch to look around the overworld. I haven’t played the Vita version, but I could imagine the game being a lot more uncomfortable having to deal with the buttons on each side of the system. Having a phone that can be held in one hand, or a tablet that can easily rest in your lap or propped up on a table sure feels like the natural, intended way to play, though the 3DS version would likely work well with a stylus, too.

The entire game takes place in a world that’s laid out similar to a Zelda game. The experience is largely linear, and while I want to compare it to a Metroidvania, if only because I want to coin the term Infinitybladetroidvania, it’s a rather linear game even if it’s all interconnected, and using later abilities to go back and find secrets in earlier areas is something you’d see in an action-RPG with an overworld. But still, it’s cool compared to Infinity Blade where the entire world was look-but-don’t-touch. Here, the entire world is flat, I suppose, but you can look around each room 360 degrees, which you will have to do to find everything, but it is cool to fight battles in the world, and actually get to walk around and explore these spaces to a certain degree. You move on a room to room basis, but it doesn’t feel restricting in any way. 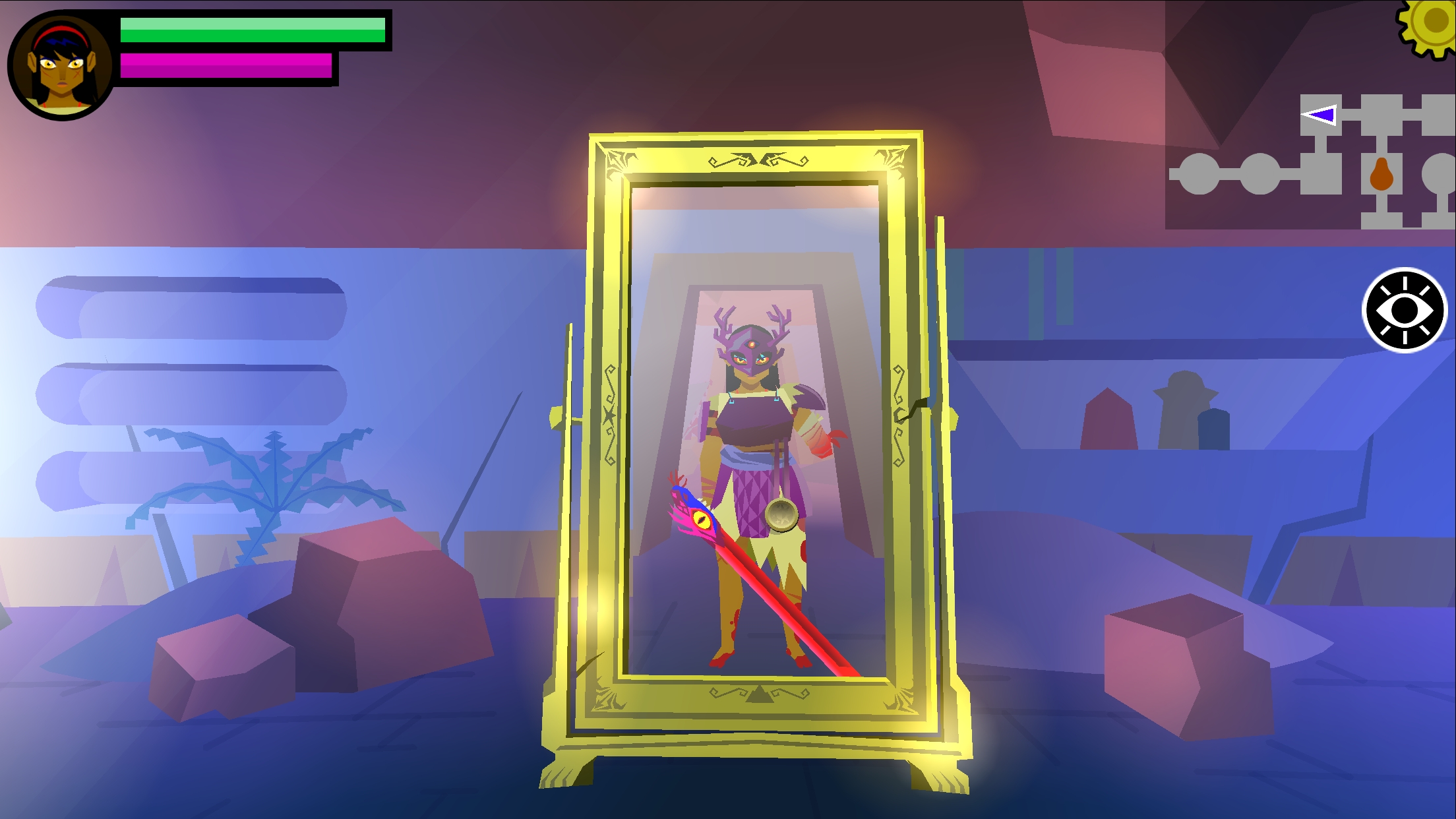 Artistically, Severed is stunning. The download is 230 MB, which is surprising, to say the least – the game is stunningly detailed and DrinkBox did a tremendous job at building a world that’s dark yet colorful. Little thinks like being able to see other parts of the world from open spaces in other dungeons helps a lot. The music and sound design is fantastic, too – be sure to wear headphones or use good speakers if possible, because the audio component adds a lot to the experience, helping to engross you into the game.

Severed has a health bar that doesn’t refill between fights, and I don’t know why it doesn’t just do that. When you die, you often respawn not far from where you died, so it’s not like it’s a huge punishment. Heck, it’s more of a reward unless you’re specifically going for a death-free run, I suppose. It just feels like one of those questionable elements that could have been changed at some point. At least it means dying is not that frustrating, but it makes finding health a bit pointless, and the heartbeat sound when you have low health to be all the more aggravating.

Severed is just a game that’s all-around cool. Its aesthetic is top-notch, its combat is deep and engaging. Plus, DrinkBox didn’t skimp on the iOS-specific features including screen recording and cloud saves (though manually done, not automatic). This looked like a must-play since its initial announcement, and while it took a bit of a circuitous path to iOS – and I don’t blame DrinkBox, if you can find a way to sell a game for a higher price on other systems first, do it – it’s home now, and it’s a must-play.