"Good artists copy, great artists steal." It’s a line that essentially means that explicitly mimicking something is easy enough to do – making a clone of a game is simple enough. But it’s another thing to take the ideas of one game and use them in another to create something that is original all in itself. Time Locker (Free) explicitly steals the gimmick of Superhot, the first-person shooter where time only moves when the player moves. It even uses a very similar low-poly graphics style. But instead, it turns the game into a shoot ’em up with some hints of Crossy Road (Free) to feel like a unique iteration on previous ideas, one that uses existing concepts liberally, but to form its own thing that stands on its own merits. 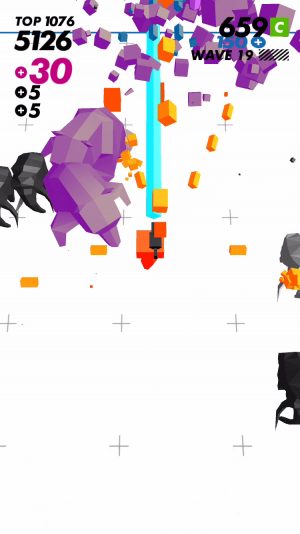 But those merits have to be defined first. Because part of the issue is that Superhot has been cloned several times since its original 2013 game jam edition. And several clones of Superhot have shown up on the App Store. But the difficulty is not necessarily in replicating an idea, it’s in creating it in the first place. Figuring out the concept of Superhot and implementing it into a fully-formed package took a lot of time! And sure, it’s possible for unscrupulous developers to replicate it. Unity and other engines have made that super-easy.

But what about a developer like Time Locker‘s Sotaro Otsuka who pretty clearly decided to adapt this time-freeze system for his own game? Well, that’s pretty much the basis of video games. Superhot is of course the byproduct of years of first-person shooter advances. Crossy Road is Frogger but adapted into an endless format, with the voxel visuals. Candy Crush Saga (Free)? Well, it’s not like Bejeweled and other countless match-3 games didn’t exist beforehand, but King made the content and structure that turned it into a smash hit. I had a CEO once angrily email me after I referred to a game his company released on mobile in the context of Clash of Clans (Free) when he claims they were doing the concept first. Maybe so, but originality is secondary to execution of a concept. And if an artist can iterate on a concept while clearly showing the strengths of the ideas they were inspired by, what is the issue? 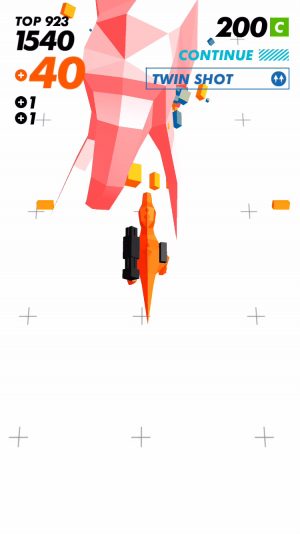 I firmly believe that Time Locker should stand on its own, despite the parts to the equation that makes it up being plainly apparent. It turns out that adapting this time-freeze system into a shoot ’em up is a genius idea. It manages to combine the chaos of a real-time shoot ’em up, with the accessibility of artful skill that only the best players have, while utilizing its unique structure to its advantages. It’s possible to take stock of your surroundings, to see where the danger is coming from and act accordingly. And it makes you feel really cool for doing so. But then there’s that ever-present black wave of creeping death. It moves even when time is frozen, giving you leeway to move backwards if necessary, and not rush into danger, but not to dawdle at all. And the further you get, the more you’ll have to deal with as enemy and bullet counts get more numerous, and the hazards more obstructive. You get this peculiar balance of feeling pressure to act while simultaneously having to be smart about what you’re doing.

Even if you ignored the time-freeze feature and just looked at Time Locker in the context of a standard shoot ’em up, Time Locker feels unique because of the way that it plays. Enemy formations in particular feel different, as you often you deal with large packs that cross your path both vertically and horizontally. You also have a wide plane of lateral movement to play with; You can dodge horizontally, you can go around enemies and obstructions, and sometimes you’ll have to go a long way laterally to take out something like a cannon obstructing your path. It feels unique even of itself, and it’d be interesting to play a game like this that didn’t have the start-stop system, if it was just a shoot ’em up with the creeping death to compel you to advance. I think the game would have to be far less chaotic; Time Locker gets away with more hairy situations that I think a free-moving game wouldn’t be able to pull off. Regardless, this game has a lot going on beyond its most obvious inspirations. 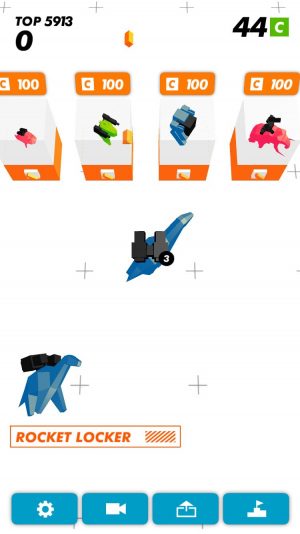 The developer has also done a great job at making a game that feels good to physcally play. The controls work really well, as you can swipe anywhere on screen to move your character without being obscured at all. The sound effects with the pops that indicate when you’re moving help out a lot with the feel of the game, and the subtleties of moving slowly when you choose to do so. You have that simulated tactility on a device where there is none. And the clicks when you hit enemies are similarly satisfying. I also find myself fascinated by the game thematically. Many of the enemies are low-poly animals, and it seems kind of absurd to be chased by a giant orange elephant. And then occasionally there’s like a tank to destroy or a helicopter that flies by. It’s a game that’s committed to this weird absurdity that yet feels consistent.

Time Locker is free without in-app purchases, as you can earn coins while playing, and spend them on a powerup for your next round, or on buying a random character with a special weapon for 3 rounds. You can spend coins to continue, but never a huge amount, or you can watch an ad. Plus, the game gives you video ads for more coins, and the occasional free gift. You will likely never be lacking for coins, at least not for long. It’s definitely something where I like getting a lot of game for such a minimal cost, but I’d love something to support the developer a bit more directly, especially as this game is quite worthy of it. But there’s a crowd that might find this to be the near-ideal game as far as what they have to pay goes, and hey, I say enjoy it. With that lack of cost, this is a must-download.

But this is a must-download not just because it costs you nothing, but also because it’s such a clever and fun game. Every time I play it, I have to go in for a few rounds, and I’m always challenged and amused by the game. And I can admire this game for the way that it adapted a really cool concept and made it its own. Give it a download.