I got into poker at a relatively young age. For most kids in conservative families, it’s usually the same story — one of your relatives probably teaches it to you and tries to get you to sip a beer. I carried over my knowledge of straights and flushes into middle school, where I’d compete for candy in the cafeteria and tell faculty and staff we were playing Go Fish. And in high school, like everyone else during the height of the poker craze that seemingly exploded with Rounders, I played for higher stakes. But by my college years, it kind of tapered off a bit, and now I rarely encounter a situation where I can get some hands in. Yet, I’ve kept all of my experiences bottled in, including all of the statistical probabilities for each hand, ready to dump at a moment’s notice. That proved rather useful for Politaire (Free). 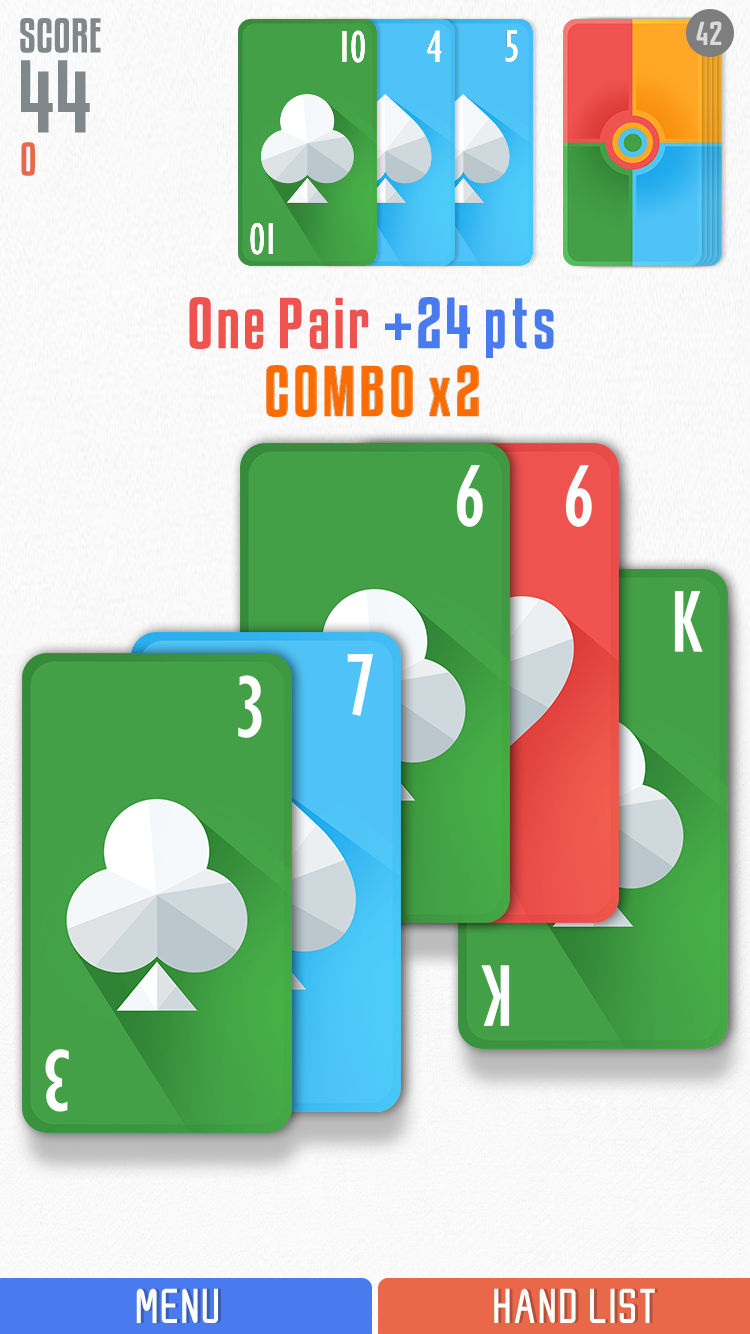 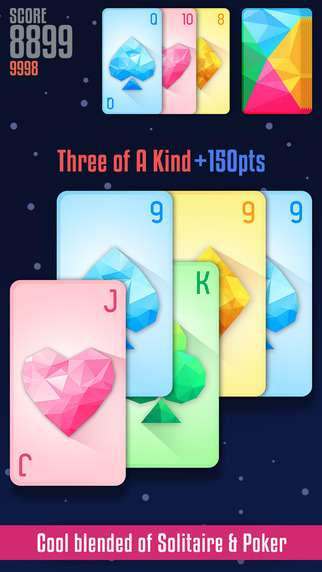 It took me several days, just glancing at the app, to figure out what Politaire meant. Political Solitaire was my first guess. Then I actually played it and “duh," I realized, it’s poker and solitaire — a combo that works pretty well, actually!

Players are graced with a hand of random cards at the start, conveniently color-coded by suit, consisting of choices from a standard two through Ace deck. Right in the upper-right hand corner is a deck, and just like real poker, you can choose how many cards you want to discard to draw more (though the limit here is three). By simply tapping the cards they’ll raise up out of your hand, and swiping sends them into oblivion, drawing from the top choices (shown directly to the left of the deck). Easy? Well, not if you’re going for a high score. 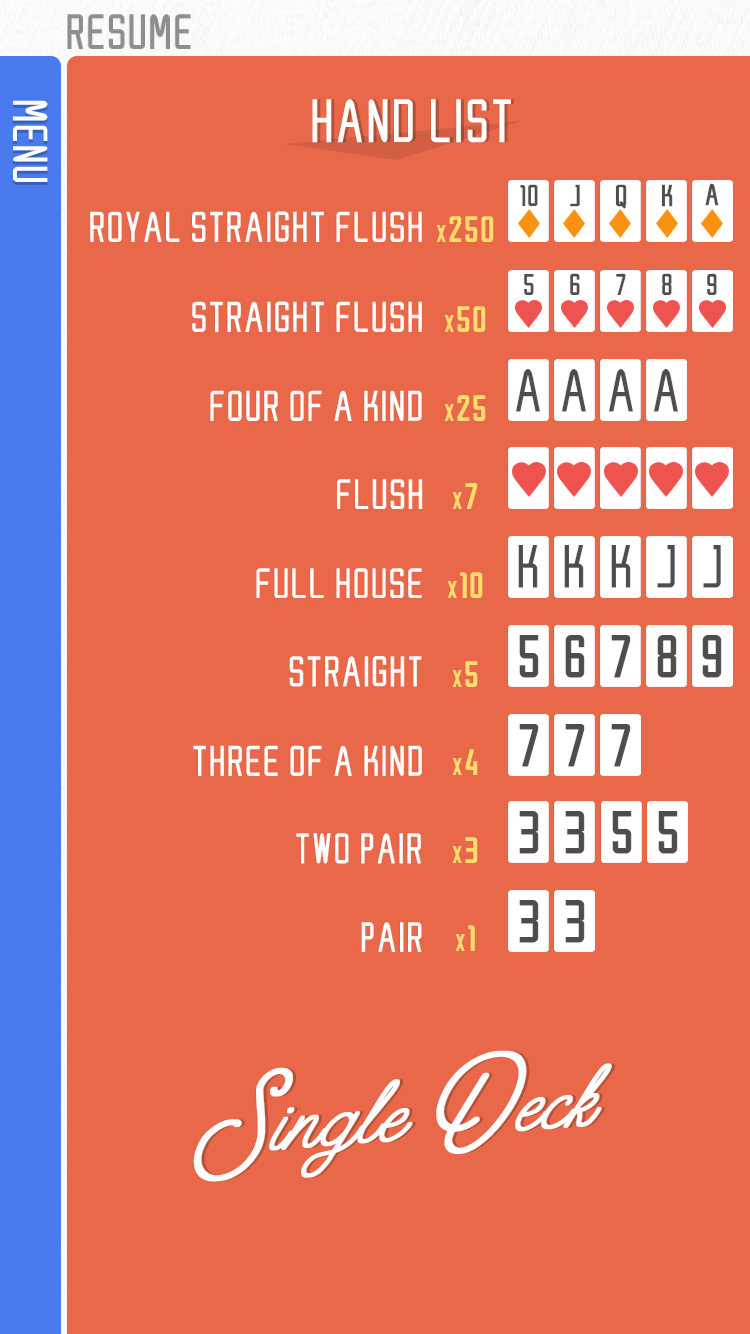 There’s also a lot of roadblocks to prepare for, like going for something big like a flush (all the same suit) or a straight (ascending or descending numeric values). Because even if you have all hearts except for one card, and turn that one in, you might end up getting a pair while you weren’t paying attention. You really need to think smart and to go big or go home, taking risks just like any old poker game.

Players repeat this process until the deck is done, then you’re scored and sent on your way to another session. It’s quick and painless to play through, and even if you don’t outscore your previous attempts, you still feel like a winner. It’s also endlessly replayable even if it only has two modes (more on that in a moment). Speaking of score, you can actually net combos if you happen to successively trigger new hands, which is easier to do for things like two or three of a kind, and much harder with nearly everything else. Still, there’s a lot of strategy involved as you go for the highest multiplier possible, with hands of a greater value (just like real poker) granting a bigger score ceiling. You can wile away at that Royal Flush if you really want, or go with tons of pairs — it’s your call.

Another thing that really needs to be said — it looks beautiful. The minimalist approach works wonders here, as every card is easy to read, and large enough, even on a smaller device, to deliberately tap. The same goes for the colors — they’re all bold and simple to comprehend, especially when it comes to delineating spades and clubs. Naturally, it is a more enjoyable experience on an iPad.

Everything is very fairly monetized, since the core app is free. All you really need to deal with is ads at the end of a round, and that’s basically it. If you so choose you can expand the game by adding a new double deck mode (on top of the base single deck) for $1.99, as well as new card backs/faces, and the elimination of ads. After just one round I immediately pulled the trigger — an app this polished and sleek really needs to be supported.

While video poker handheld machines have been around for decades (I had one myself as a kid), Politaire is pretty much the perfect way to pass the time if you’re looking for a solo card game. It’s also much more convenient than setting up a deck yourself, and you get some snazzy visuals while you’re playing it. The developers will get no tilt from me.