Do you want a lesson on how far the point-and-click adventure game has come, while still seeing the appeal in the classics? Day of the Tentacle Remastered ($4.99) is a perfect example of that. This is a genre classic made by some of the masters of the medium. Tim Schafer and Ron Gilbert are two of the names behind this game that you likely recognize, straight from the LucasArts days. Fans of the original game will be glad to know that this is the exact same as the original, just with an optional enhanced interface and redone graphics that convey the spirit of the original game, adding some detail and animation, without altering the heart of them. For people coming to this for the first time, like myself – strap in for a frustrating experience, but one that’s rewarding if you give it a shot and are patient. 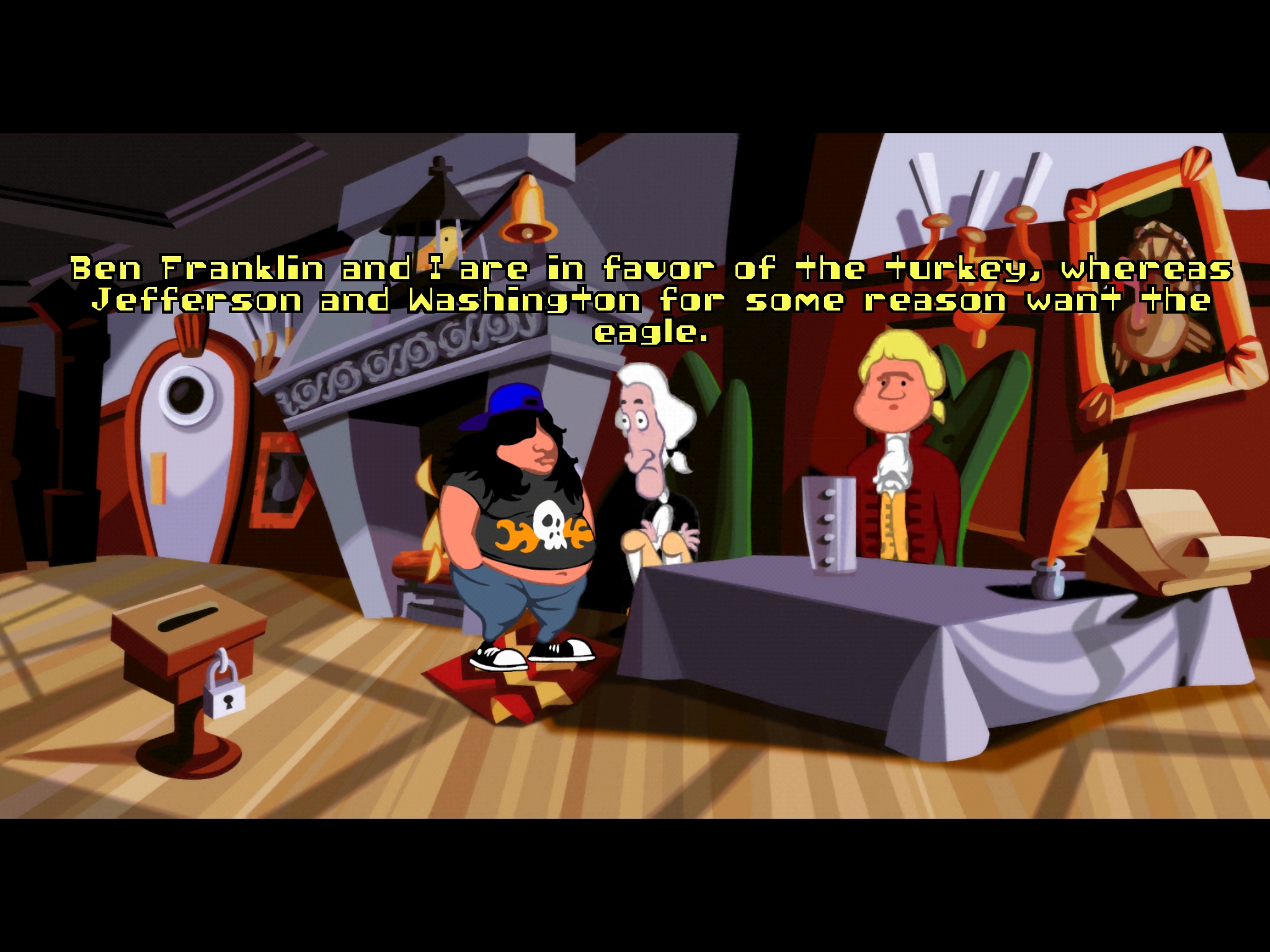 Day of the Tentacle – a sequel to Ron Gilbert’s Maniac Mansion which you can play in a computer in this game – has you trying to prevent Purple Tentacle, a sentient tentacle, from taking the world after stepping in some sludge spewed forth by the Sludge-o-Matic that gives those exposed to it delusions of grandeur and the ability to formulate effective plans for world domination. You do this through time travel, of course. So you control Bernard, Hoagie, and Laverne, all of whom wind up in different eras, as they try to stop Purple Tentacle’s evil plots. Oh, and possibly alter history in the process.

This game is peak “pick up everything you can and do every action you have the ability to do on anyone and anything possible" that you would expect from a 1993 point-and-click adventure game. Oh, and then the game gives you the multiple characters to play as, with the need to switch items between the 3 of them in their different eras. This is a befuddling game, and while point-and-click adventure games are enjoyed in part because their puzzles are allowed a certain amount of obtuse deviousness, if you’ve only played modern ones, you might not be ready for just how much in the way of weird things you’ll be forced to do. Thankfully, the 3 time periods all take place around the same physical location, so while the decor might change, the general physical location of each character does not, so you can develop a sort of muscle memory while navigating the world. 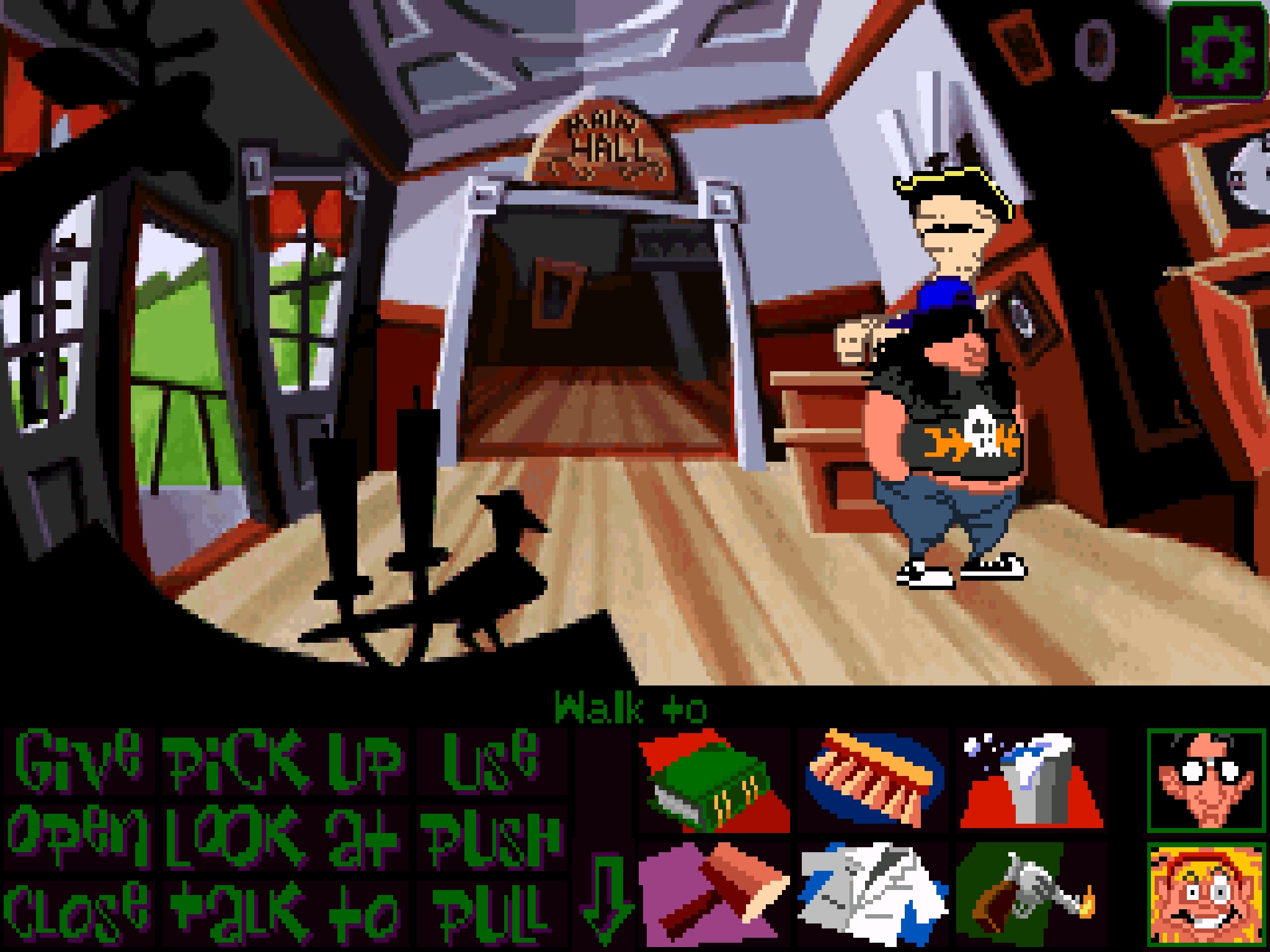 The time travel aspects to the game make a huge difference in the experience and are a big reason of why this game is so unique. Now, you need to pay attention (and I was admittedly streaming the game while playing it for the first time), but it took me far too long to realize that you could send items to different characters by putting them in the Chron-O-John toilet that each character has. It doesn’t make a whole lot of sense because you’re trying to power the other toilets in the past and future, but apparently that’s a thing you can do. It means that if you’re stuck, there’s a lot more experimenting to be done because an item might be useful in a different time period than the period it’s acquired in. So yeah, good luck with that! Still, I’m a huge sucker for time travel aspects in games, and this definitely started to scratch that itch once it finally clicked that the Chron-O-John could be used that way.

Thankfully, when you get stuck – and you will get stuck, this is a prime-era LucasArts game – you don’t have to worry too much. This was one of the first notable point-and-click adventure games to eschew failure states, so when you’re stuck, there’s always a way out. And if you throw your hands up in frustration, at least there’s decades of documentation available. I have no shame in admitting that I referred to guides when I was stuck. And in doing so, it cleverly revealed that yeah, this game is unchanged from the original, it’s just been given a fresh coat of paint. You can see that from the mode shift gesture in the game – which is way too easy to trigger accidentally – but seriously, they didn’t have to change much. 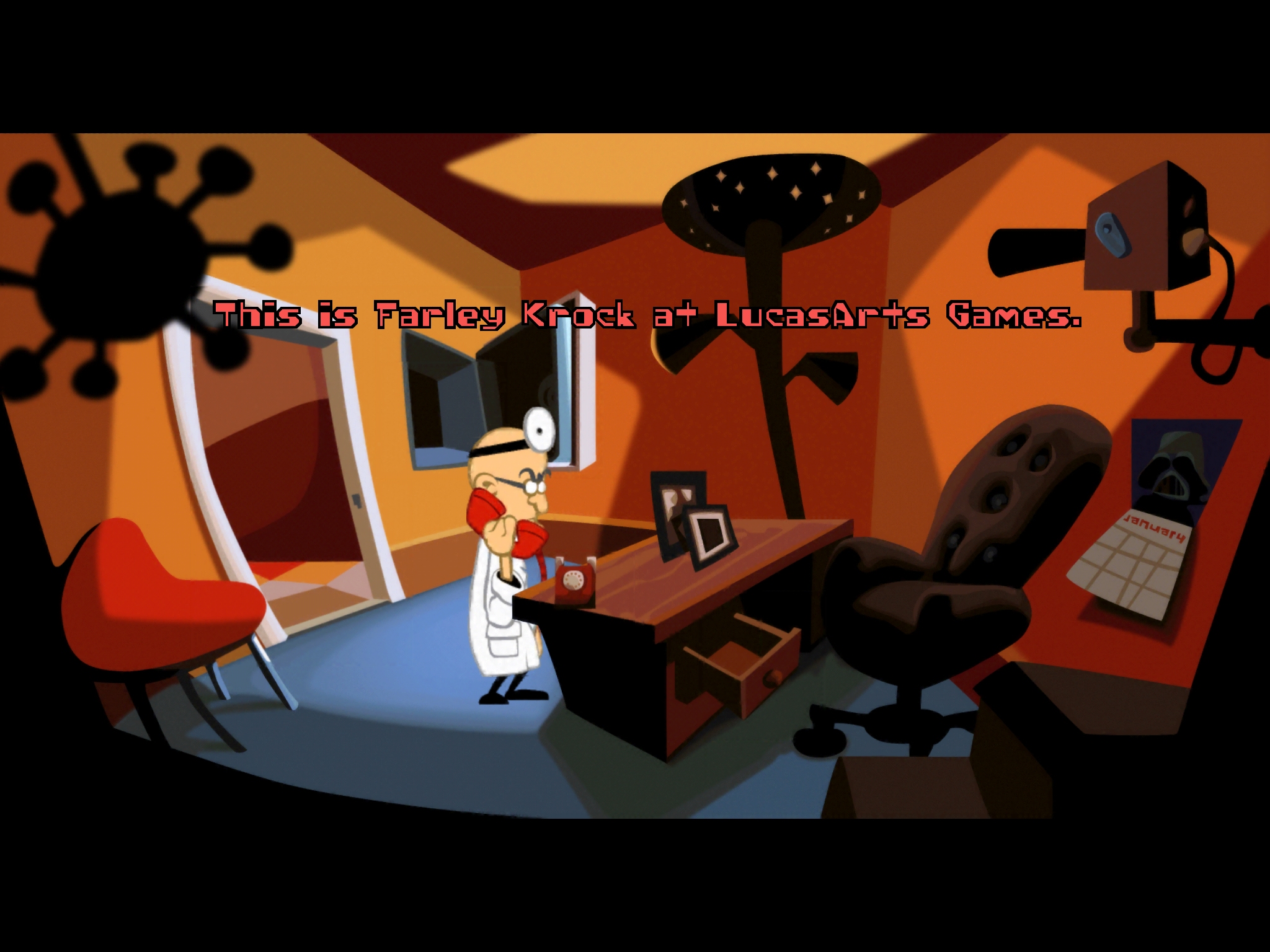 Admittedly, I’m glad that point-and-click adventure games have evolved to be a lot more player-friendly, and less obtuse. This was the first of the games that heralded a more accessible future for the point-and-click adventure game genre, but once you get past the obfuscating elements, what you get is a classic that still holds up really well to this day, even to a newcomer. The events of the game are rather goofy, the solutions eventually make some kind of sense even if there are a hundred other potential solutions you might do first. The game is also rather non-linear, as you can advance each character’s scenario independent from one another, though there are linking elements that prevent you from getting too far ahead with one character, such as an item from the future needing to be sent to the past. The voice acting is brought over from the 1993 original, and while performances can feel a bit stilted at times, it’s impressive how every line of dialogue in the game is voiced, a feat that’s tough for a lot of games to pull off to this day. And there’s plenty of hilarious moments. Plus, the whole game feels like a ridiculous cartoon in the best way, and the revamped animation conveys that quite well.

The interface has been updated for touchscreens, particularly since you can’t hover with a finger. So, the entire game can be played with taps and holds. You tap and hold on an item to pull up the interactions menu that is otherwise persistent on the bottom of the screen in classic mode. It’s easy to use items from the inventory on things on screen. The two-finger hold can be used to reveal all interactive objects, but because the mode switch gesture is pinching in or out, don’t move your fingers or you may accidentally trigger it. There are a few quirky things with the touch interface, and there’s plenty of redundancies in actions that you’re given to the point where it clutters up the interface, but mostly it works well enough without much in the way of complaints.

The best way to describe the experience of Day of the Tentacle Remastered for the new player is that it’s like going back and listening to a landmark classic metal or hip-hop album. There may be some aspects that time and later iterations have improved upon, sure. But you can definitely understand why this work is a classic, and whatever flaws time has revealed pale in comparison to the quality of the original experience. The genre has advanced, but Day of the Tentacle shows why it was a revered classic in the LucasArts and SCUMM days. I played this one in pretty much one straight shot through, and while you’ll really want to be patient (or have walkthroughs handy), you’ll likely have as much fun as I did.