The whole Pokemon GO (Free) craze is unlike anything I’ve ever seen before. I totally get that people who aren’t partaking in all the craziness are sick of hearing about all things Pokemon, and to be perfectly honest I’m pretty sick of it myself. But that hasn’t diminished my sheer amazement at how this strange, barely-working game has brought people together all over the world and become such a household name it’s being discussed by presidential candidates and South Korean cities. Love or hate the game, this sort of thing doesn’t happen everyday, and I can’t think of any video game, mobile or otherwise, that’s had this sort of effect on the entire planet. And it’s not even out in all parts of the world yet! Anyway, Gamasutra has a nice roundup of the “quotable pop culture impact" of Pokemon GO, and has collected some quotes about the game from some pretty unlikely sources. Two of my favorites:

From this story over at CNBC, a real estate agent named Jay Glazer included the phrase “I’m fairly certain there is a PIKACHU at this open house, don’t miss it" in a real estate listing. He admits that out of the ten people who stopped by the listed house that day, only one of them even knew what Pokemon GO was, but he still thinks it’s worth including because, as Glazer states,

“I think at the end of the day the goal is to get as many people through the door and interested in the apartment, and ultimately, if there’s a ‘Pokémon’ obsessed person out there who also likes this home, then we want them here, and this is the best way to attract them."

He’s not alone, either. An ad for a home in Redmond, Washington lists along with its many upgrades and features to the home “a Pokemon GO gym less than five minutes away." A listing in Tacoma, Washington gets even more specific with its Pokemon pandering promising “3 Pokemon GO Gyms, and 5 Pokestops. Confirmed Squirrtle sighting in the backyard, and there may or may not be a Charzard lvl 7 in the neighbors shed. Must see to appreciate!" Others, however, aren’t buying into the craze and a listing in Florida specifically states at the top of the listing “**There are ZERO Pokemon GO features**"

This second story I found really neat, as the Muncie Animal Shelter in Muncie, Indiana has posted on their Facebook page trying to harness some of the Pokemania in order to help out some of their shelter dogs.

“Come down to the Muncie Animal Shelter to walk one of our dogs while you get your steps in! Just come to the front desk and say you are here for the Pokemon dogs!" 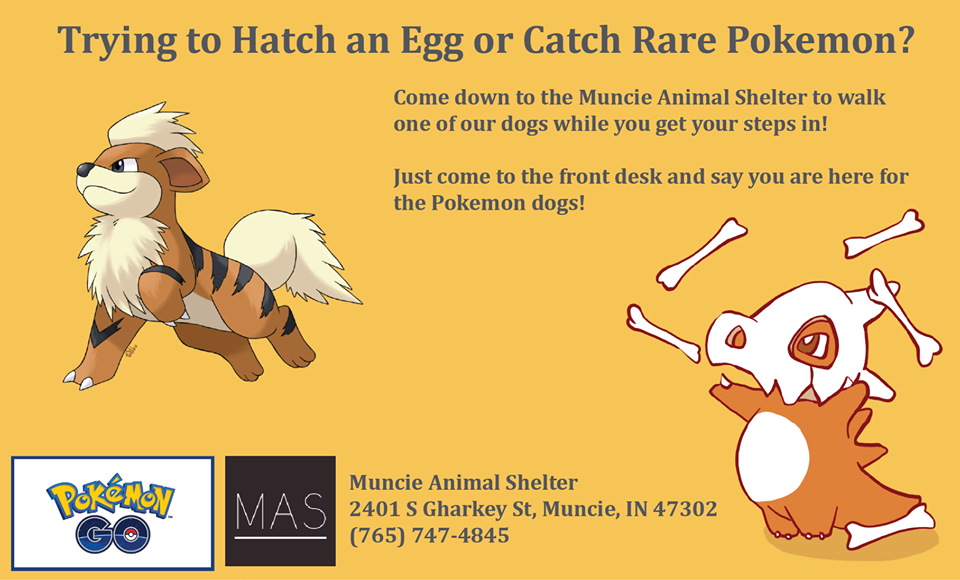 I think this is an especially cool way to get in on the Pokemon’ers who are already keen on walking all around town capturing their critters. Why not take some real-life critters along for the walk, with you? And perhaps some bonds will be formed during the walk and some extra doggies get adopted because of it. With seemingly every company or brand trying to exploit the game’s popularity in some scummy way, using that power to help out sheltered animals is really awesome. I’m really curious to see how far this Pokemon GO insanity goes and how long it will last. Is this a passing fad or is this our new reality? Check out even more interesting quotes at the source link below, and you can bet we’ll be strapped in for this wild ride no matter how long or short it may be.