There weren’t a lot of games that used the “draw a line" mechanic before smartphones, but the ones that did exist really stand out. One such title is Kirby: Canvas Curse, released on the Nintendo DS in 2005, among several other follow-ups and clones. Most of them follow the same formula — simply draw on the screen to manipulate the character, which was usually cruising through a world drawn with a cutesy veneer. Don’t Be Squared (Free) follows that same path, but with a decidedly less interesting aesthetic.

The first thing I thought of when I started Don’t Be Squared is Rayman — and I mean that in a sincere “this feels like a homage" way, not in a “it’s a ripoff" way. Sure the main character’s appendages are hovering around his body and there are companions that are similar to Rayman Adventures’ Incrediballs, but the similarities generally stop there. The team over at Super Hippo Studios manages to forge their own art style, with bright broad colors and interesting character designs. Even the menial cast members like random enemies or the helpers look memorable, and all of the action is presented with an amazing angle that shows you just as much as you need to in order to make those split-second decisions. 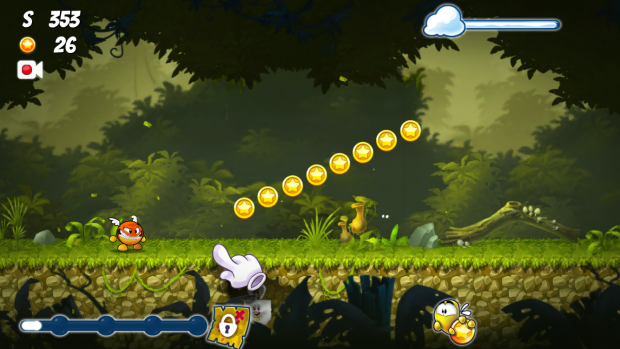 As I previously intimated, Don’t Be Squared uses a very simple “line" system, where players trace lines on the screen for the avatar to follow, whether it’s a slightly raised platform to cover up some nasty spikes, or a ramp to get them to an out of reach item or avoid a foe. By tapping the screen, players can thrust forward with a boost power that also functions as an attack. And that’s basically all you can do, which is perfectly fine with me. I love how intuitive a lot of touch screen games are, in that you can instantly figure them out after spending just several moments with them. It’s a joy that anyone can share, both casual or hardcore, and the responsiveness of Don’t Be Squared facilitates that feeling quite well. The pacing is also spot-on, in that it’s quick, but not unfairly so, and you have enough time to react.

Your goal is to basically enter each (infinite) run, lasting as long as possible to wrack up enough coins to unlock the next theme (of which there are four total at the moment, with more updates planned). Naturally there are three challenges to complete, some of which stray from your typical collectathons. It’s all standard stuff and has the potential to get old after 50 runs or so, but again, the charm holds it up higher than it deserves. 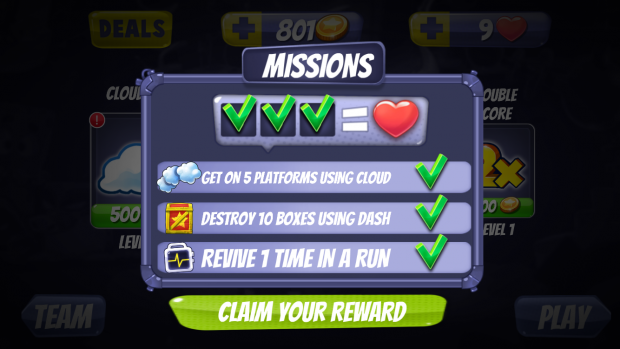 Which leads me to its chief crime. IAP in this game is on the border of acceptable and questionable, even if it never hits egregious “I quit" levels. Bad news first — there’s lots of it, and some of it is in your face. Of course power-ups and daily bonuses pop up for each run and bootup session respectively, but there’s a lot more on offer as well. You can pay $1.99 to remove ads (a feature I generally like in “buying out" a game), pay $4.99 for a coin doubler (pushing it, but optional, so okay), and anywhere from $2.99 to $13.99 for multiple themed “packs," which include cosmetics and the like. You can also earn a small sum of coins by “liking" the game on Facebook or watching video ads.

Yep, it has two forms of in-game currency too — coins and hearts. The former is used to unlock new stages and content, and the latter, of course is energy. You can also use coins to buy helpers (which grant abilities like saving you from water once per run), and new characters. It’s all messy, but you can in fact play most of the game with the base character without spending anything, even if the power-ups and such directly impact how well your runs generally go. Even without the coin doubler I felt like I was unlocking stuff at a decent pace given that the base game is free. I just wish the temptation to sink more coins into upgrading abilities wasn’t so front and center every time you restart (twice, no less).

Don’t Be Squared looks gorgeous, sports a great animation style, and is very fun to play, but it has a tendency to gate a lot of that fun behind walls to push people into IAP. As long as you have the fortitude to deal with all of those ploys, you’ll have a good enough time.