Assuming you’re in the US, Japan, or New Zealand, chances are you’ve probably downloaded Pokemon Go and have been since made fully aware of what a ridiculous battery suck the game is. It’s sort of incredible how quickly it drains your phone, almost putting Nintendo’s Miitomo to shame… Which is a pretty incredible accomplishment. I’m a massive Anker fanboy, largely because it seems like as far as actual name brands are concerned, they’re the absolute best value out there. Yes, you can get cheaper weird generic batteries but I’m always nervous about plugging my phone, a device I use every day and depend on quite a bit, into potentially dodgy stuff. Also, I’m a fan of external packs over battery cases, as you can help friends out when their phones are dead without awkward case swapping. 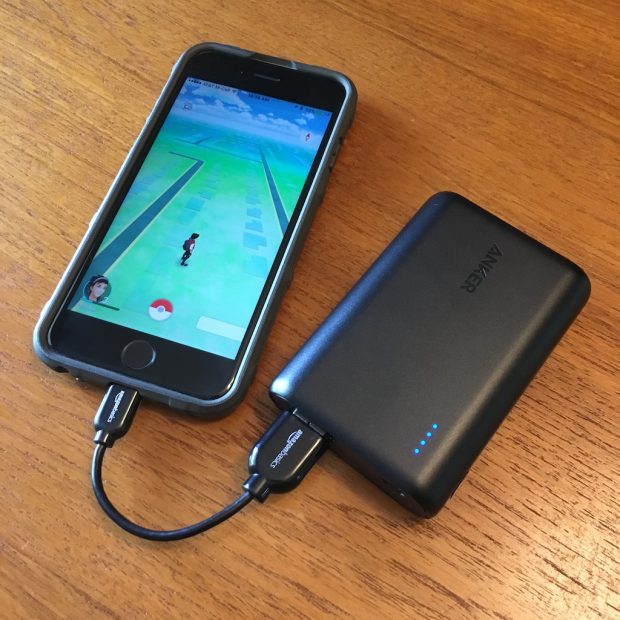 Lately, I’ve been rocking the (relatively) new Anker PowerCore 10000, it’s $22, which is pretty dang cheap for a battery with 10,000mAh of juice onboard and they’re using some kind of new battery tech inside of it that’s both smaller and lighter than other batteries I’ve had with lower capacities. 10,000mAh is enough to fully charge your iPhone from totally dead to totally full 4ish times, meaning you can play Pokemon Go basically all day long without stopping. Also, using a full-size Lightning cable for charging on the go is kind of awkward, so I recommend picking up one of these 4" cables from Amazon. I’ve been using their previous generation cable (pictured above) for years now without issue.

So, there you have it, enough juice to play Pokemon Go all damn day with a cable to charge with for under $30, shipped Amazon Prime. You can’t get much better than that. Also, if you don’t have a battery pack yet and don’t care about Pokemon Go, they’re still stupidly useful. I’ve owned a bunch of Anker stuff over the years, and all of it has been great. Check out their Amazon store for all sorts of other batteries in all shapes and sizes if this particular one is too big (or too small) for what you’re looking for.

Anyway, as mentioned, I’m an admitted Anker fanboy, but if you guys have other recommendations for accessories that other Pokemon Go low-battery iPhone players should check out, drop ’em in the comments… Or if you want to argue why battery cases are superior to external packs, go wild! (Comments with links get sent to a moderation queue to prevent spam, but I’ll try to approve them as quick as I can.)