One of my favorite games of the past few years on PC is Crypt of the NecroDancer ($1.99), a rhythmic roguelike that I tried out with a friend, and I fell in love with the whole concept of the game. It’s a roguelike where movement is set to the beat of a fantastic soundtrack by Danny Baranowsky, with the idea being that the entire game can be controlled by the four directional inputs on a Dance Dance Revolution dance pad. After enjoying my first time with the game, I rushed out and bought the game with its soundtrack on Steam.

I played a lot of Crypt of the NecroDancer at various times, but probably less than I really wanted to, because the game was on PC. I’m on my computer a lot, but usually working, or looking up stupid stuff, just listening to music or whatnot. What I would have killed for would have been a mobile version of the game so that I could play it on my couch like other games. I love mobile in large part because I can take my games and play them wherever, without worrying about plugging in my PC to my TV. Or if I want to play a game while a baseball game is on the TV in the background, I can do that with ease. So I kind of fell out of love with Crypt of the NecroDancer…until the recent mobile release. There’s a lot to love here, but this is a game you have to instabuy, as it’s just so much fun, and bursting at the seams with content and replayability. 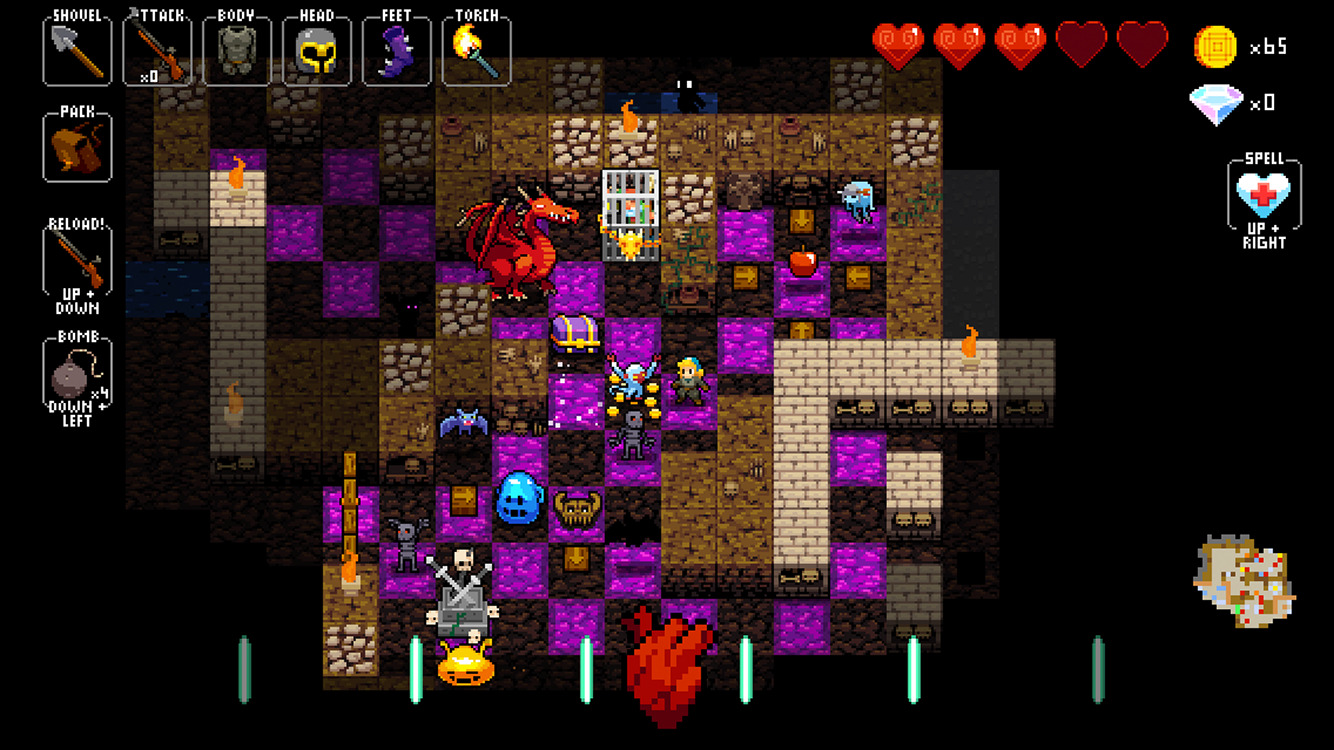 The best way to think of Crypt of the NecroDancer and how it works is that it’s a turn-based, tile-based roguelike dungeon-crawler, it’s just that there’s a timer on each move and a penalty if the timer runs out. Oh, and the timer length is very short. See, the concept is that the main protagonist, Cadence, has suffered a mild case of death and upon her resurrection, she has to move to the beat of the music synced up to her heartbeat to do anything – and the beat changes with each level’s different music tracks. So, not only are you trying to time your moves, as a missed move can mean you skip a turn, and lose your coin multiplier, but also your enemies move, and if you have a strategy to tackle the enemies threatening you, better adjust in a hurry! You’re constantly thinking on your feet, because you ideally want to keep going the whole time – a coin multiplier that can also affect your weapon stats comes into play. You start off with nothing, and the all zones mode is more of a pure roguelike, but the main game modes give you permanent upgrades to unlock with diamonds you earn while playing. It’s all very difficult, so expect to die a lot.

The good news is that if you’re having a rough time with the game, and I’m sure you will, there are plenty of helping hands that you can unlock. The permanent unlock items will increase the odds of finding powerful loot in dungeons. The weapons in particular are a huge help, anything that lets you attack enemies from a distance is killer. You can also remove items from the random item pool, which is great for those items whose drawbacks are greater than their benefit. All of this doesn’t really count for the all zones mode, but that’s a totally different beast I only recommend taking on when you’re ready to do so. That’s a long time coming because you really have to get down the ability to manage all the enemies’ different patterns, and to manage them while taking damage as little as humanly possible. 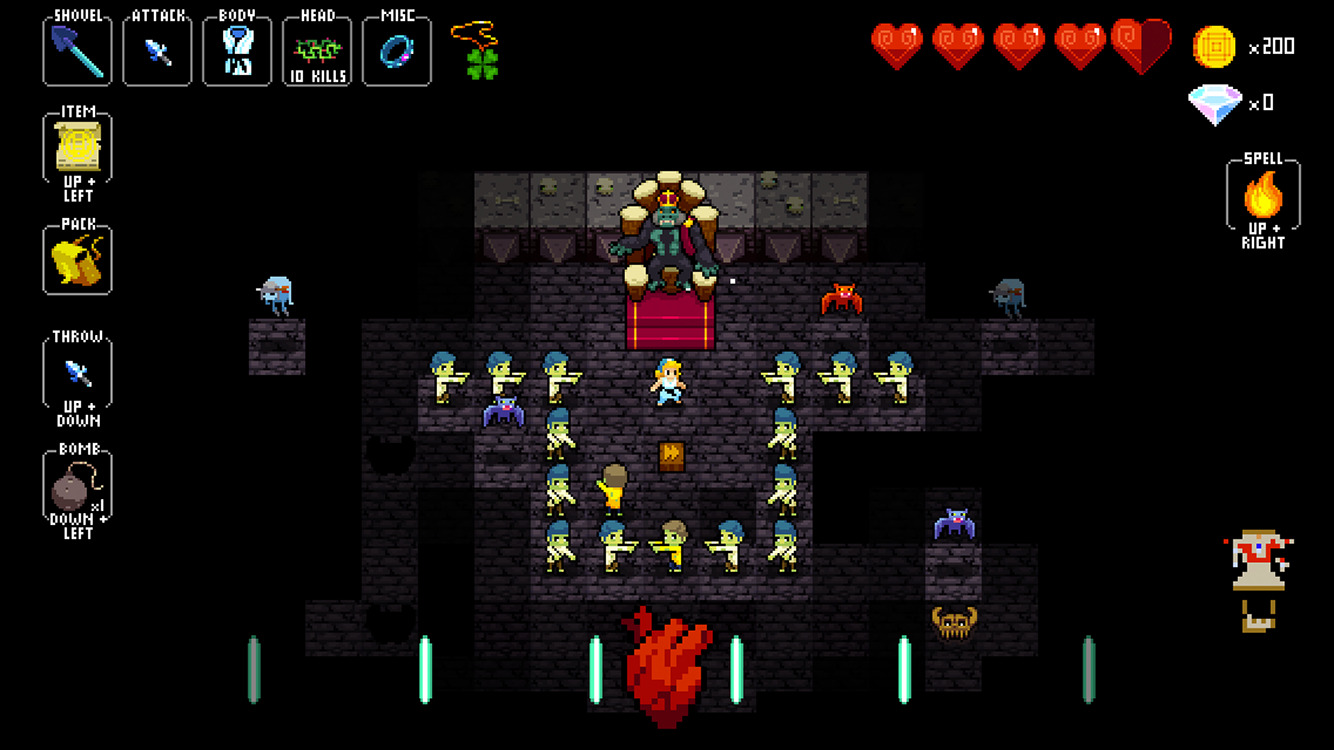 Thankfully, the Bard is here to help. This character eschews the rhythm portion of the game entirely, and he’s a worthy experience. You can learn a lot about studying enemy patterns by not having to worry about the constant movement. He makes the game a lot easier because of the ability to plot out your moves, but it winds up being a great sort of practice mode. Granted, you can actually practice against the enemies and bosses, but there’s something different about getting to do so in an actual game setting. Oh, and because he makes the game easier by virtue of lacking rhythm, you can get the boss reward diamonds easier, allowing you to unlock all the items and upgrades quicker. Oh, and if you’re in a situation where you can’t play with music, then well, here’s your guy. But ultimately, he shows that this is just a good, fun roguelike that doesn’t explicitly need its rhythmic hook, but it is there.

Still, though, the most rewarding part of the game is playing with Cadence and doing well with her, as the game is built around her abilities specifically. Though, there’s a ton of options if you want to change your experience. Want a more forgiving game? Play through each world one at a time, or with the Bard. Try the different characters, such as Eli with his bombs that can also be kicked, Bomberman-style. There’s ten characters in total to play as, and they’re at least worth checking out for their myriad quirks. And dying from collecting gold as the Monk is certainly amusing, to say the least. At worst, these characters all show that you have so many ways you can play Crypt of the NecroDancer, that you always have something tangible to work toward, or some way to change your experience if it gets stale. I can play this game for hours on end – and now that I can sit back on my couch and play this game on my phone or on my Apple TV with ease, I have lost way too much of my life to this game. Send help.

Let's see what happens when you blow up the shrine room in @NecroDancerGame! Whoops! pic.twitter.com/qhBdqsiALn

I will say that you need to be really patient and practice a lot at Crypt of the NecroDancer. It will be brutal for a long time, and that’s even in the level-based modes where you can roll out with up to 6 hearts at the start and only have to complete 3 levels and defeat 1 boss. The all zones mode is a new degree of brutality with only 3 hearts at the start, slightly tougher levels due to tougher enemies appearing earlier and more often, oh and having to last through the entire game. Success is incredibly rewarding when it does come, because you have to learn to survive. The enemy and boss patterns might seem fearful, but the more you experience them, and the more you practice against them in the specific practice rooms, you see that they’re all simple on their own. You just have to figure out how they all work in conjunction with each other, and to do so to the rhythm of the beat. That’s all easier said than done, but the game is so accessible at its core that getting that all down? It’s not impossible. And the game makes practice and improvement accessible as well. Crypt of the NecroDancer is nothing if not fair. It gives you mighty tasks to accomplish, but the tools to get them done.

So, how does Crypt of the NecroDancer control on mobile with touch controls? Well, there’s a few different options. The swipe option seems the most convenient if this is your first time playing, but you’ll have to tap on the various indicators for bombs, items, and spells to trigger them, and on iPhone, they can be a bit small. The edge controls try to give you a bit of a mobile-optimized control scheme, with each thumb having access to its side movement, along with up and down. This makes it possible to trigger all actions from the two thumbs. The downside is that I get a lot of accidental presses with this control scheme. The dual d-pad virtual controls feel like they give me the most accurate control, as I can also use the tap to use item function if I so choose, but I kind of like the edge controls in theory as they feel more designed for mobile. The best way to play this game is with physical controls, and you can do that with an MFi controller! Still, the touch controls are more than good enough to enjoy this game. 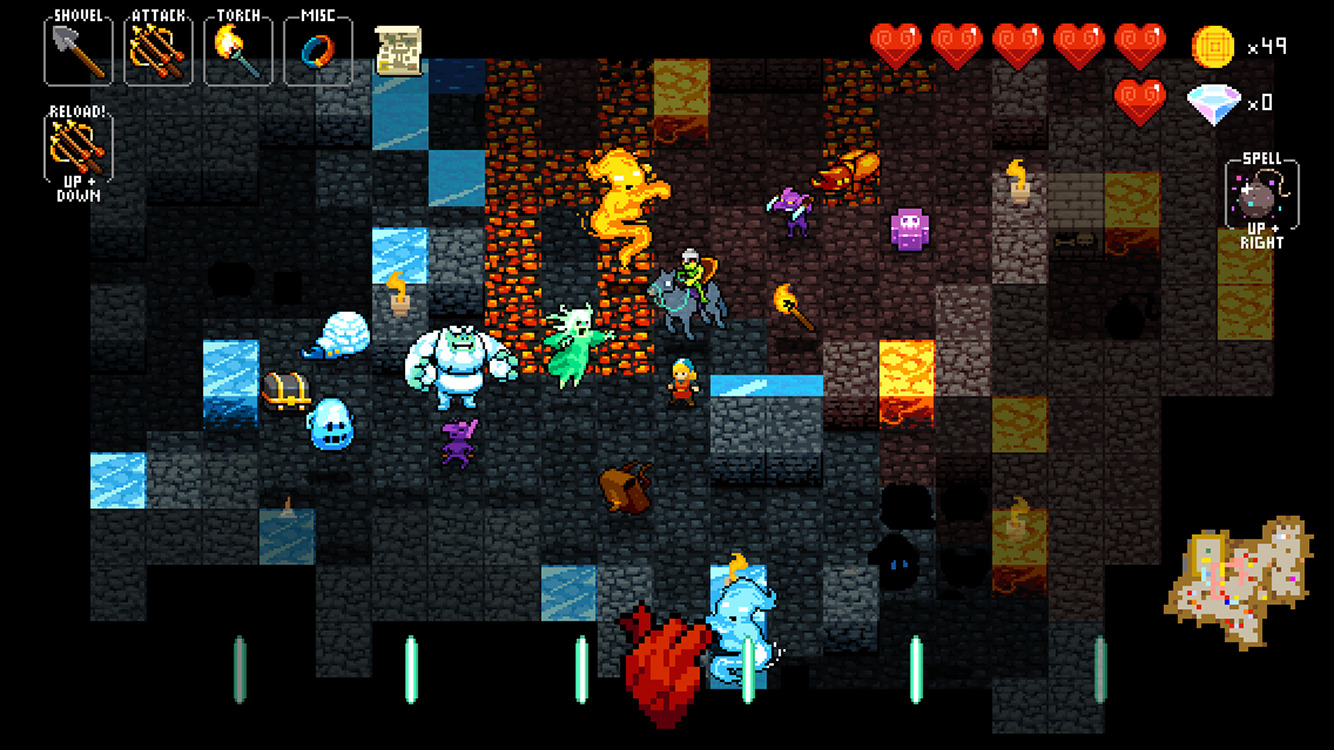 The mobile port by Blitworks for Brace Yourself Games is a pinnacle of how mobile ports should be handled. Every major feature from the PC version of the game has been made available on the mobile version. All the characters and game modes, including the daily challenge are here. All the soundtracks – the base Danny Baranowsky soundtrack, along with several remixes including a metal one – are here. Oh, and custom soundtracks have been implemented with your personal iTunes library. The game is a universal app for iOS and tvOS, with Siri Remote support to go along with controller support. Cooperative play is enabled by connecting multiple controllers. And there’s iCloud syncing between versions, too! The fact that this version of the game is somehow a paltry $4.99 at launch in comparison to the $14.99 of the PC version is a ludicrous deal.

The only complaint I have about it is that the controller support needs a bit of tweaking – it can be too easy when restarting to throw your weapon if you press the A button a bit too long, and triggering other abilities often happens if you accidentally hit two directions at once on a particularly-mushy d-pad. Also, I like the screen recording option available, but am disappointed it goes away when you view the replay of your run – I might want to watch it back and share specific moments after they happened! Still, I’m glad recording is there, and it’s just all part of this game’s entire package. This is a game that was meticulously adapted for the App Store to feel like it was meant for the platform the whole time.

Crypt of the NecroDancer is one of this generation’s finest games, and the mobile version only makes that even clearer. This game can provide you countless hours of enjoyment, with great music and a gameplay concept that remains clever and unique. I give this game my highest recommendation. No matter who you are, or how skeptical you might be of this game, I implore you to give it a shot. It’s only $5 for a game that is worth many multiples its cost. This game will test you, it will frustrate you, but as you start to improve, its successes become so much more rewarding. You will be glad you sunk all the hours in to conquer its challenges. Put on some headphones, sink in for a few hours, and enjoy an unparalleled experience.