Crypt of the NecroDancer Pocket Edition

Two things that are so hot right now: Mashing game genres together and old-school inspired dungeon crawlers. Both things are getting a bit long in the tooth, and both can describe this week’s Game of the Week, Crypt of the NecroDancer Pocket Edition ($3.99) from Brace Yourself Games. Somehow, despite being built around a couple of ideas that are getting kind of stale, Crypt of the NecroDancer manages to feel incredibly fresh and is a wonderful fit on the mobile platform. 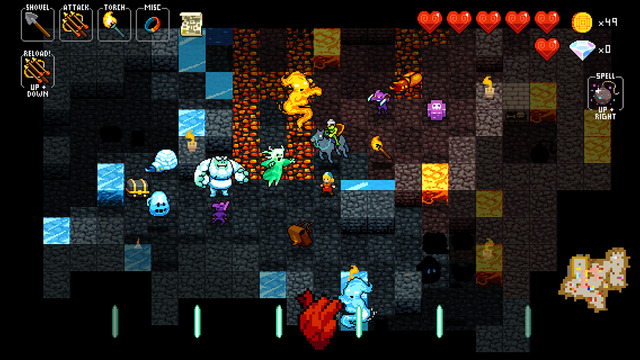 Crypt of the NecroDancer takes your average pixely dungeon crawler and makes it into a rhythm game. That sounds weird and like it would be a terrible idea, but it totally works. You must tap (or swipe) the directional controls to the beat of the songs in the game (or songs from your device’s music library), and if you tap offbeat you won’t be able to move and/or attack as planned, making it even easier for the vile dungeon creatures to get their hands on you. Also, there’s a coin multiplayer bonus for keeping on the beat, and you’ll need all the coins you can get to buy items throughout your journey.

The greatest part about Crypt of the NecroDancer is that the whole rhythm thing isn’t just some gimmick tacked on for the heck of it. This truly feels like an evolution of a dungeon crawler where the rhythm aspects add tremendously to the experience. It’s hard to put into words just how fantastic this game is. I’d heard Carter going on and on about it when it launched on desktop last year, and although I never played it then, I always thought it seemed like the kind of game that would be a nice fit for mobile. With its surprise launch on iOS this week, I’m happy to say that that is absolutely the case.

There are so many more great things to be said about Crypt of the NecroDancer, from its unique selection of awesome enemies to its kick-ass soundtrack, but those things are likely best left for a full review. Also, I kind of just want to stop writing and get back to playing. So be sure to check out the game’s forum thread for lots of impressions from the community, and if you’re looking for an engaging and unique game to spend the weekend with, Crypt of the NecroDancer is an easy recommendation.