I’ve talked about shoot ’em ups ad nauseum, and for good reason — they’re one heck of a genre, and they’re making a big comeback on mobile devices. They’re just so fun to play and prey off of your ability to react to any given situation. I mean, who doesn’t love blowing up aliens or some otherwise evil entity while dodging a hail of bullets on-screen? It’s pretty much a universally beloved pastime. Frantic Shooter (Free), which hails more from the Robotron school of thought than anything, is just as fun even with touch controls.

A lot of shooters on smaller devices utilize an auto-fire system, and that’s just what Frantic Shooter does here. But the developers take it a step further, implementing a relatively controversial automatic aiming system. It has the propensity to get in the way at times, especially during some hectic moments where you absolutely need to shoot a high priority enemy in a specific area but can’t, but for the most part it does work. The game isn’t a slouch in the sense that it doesn’t detect foes, and just about any direction you need, you can influence by swiping towards that part of the screen. 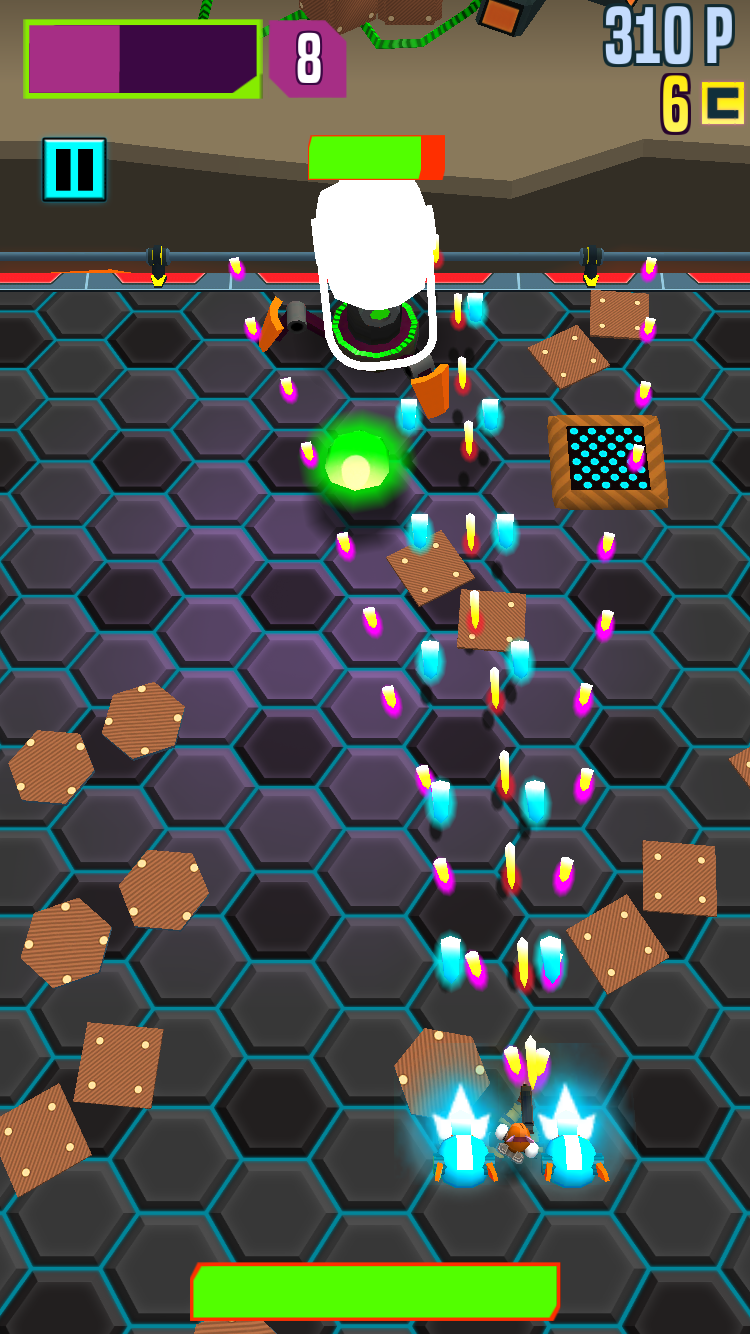 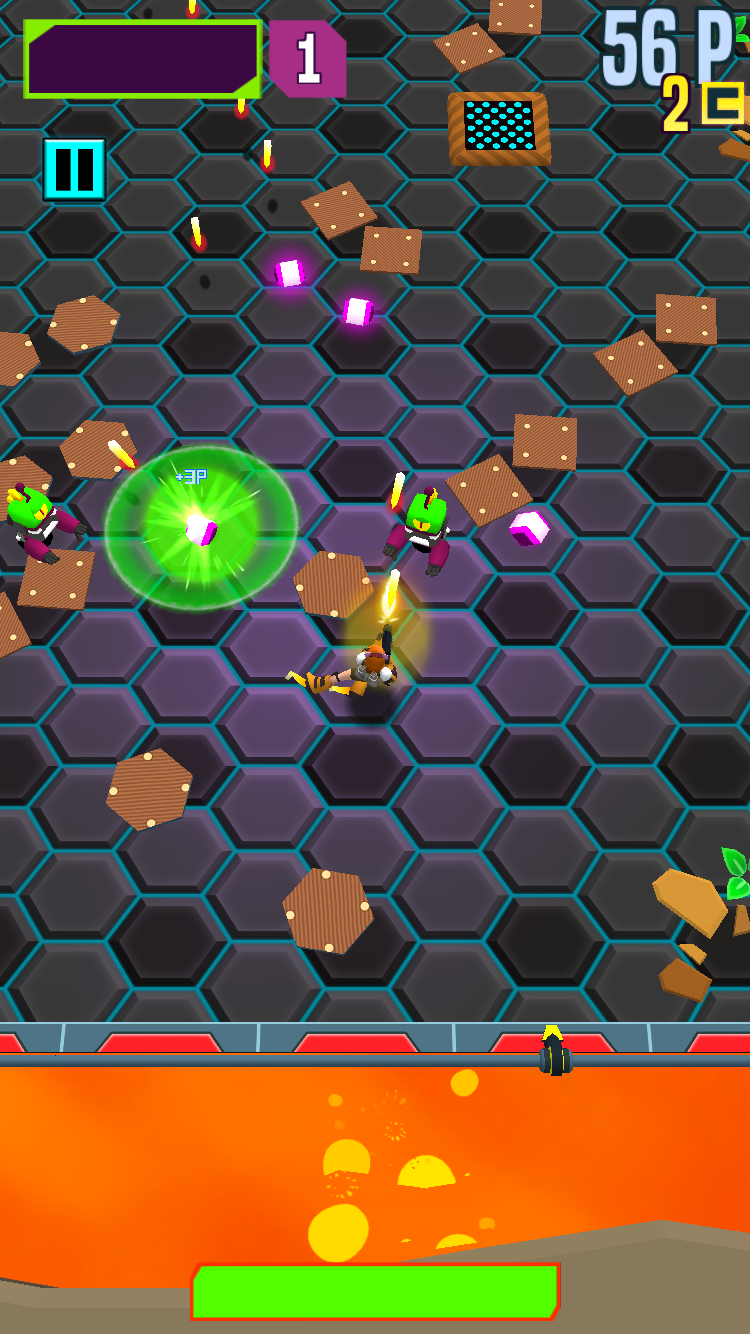 And swiping is what you’ll be doing constantly. Your avatar can be moved bit by bit with a short, concise drag, or flung across the room with a big concerted flick. It’s both funny and effective, having your character comically dodge bullets like that, and after just five minutes with the concept I was ready to go. With a few exceptions on later levels, I found the mechanics to work just fine.

It also helps if you do pick it up sooner than later, because the rich get richer in Frantic Shooter. By picking up subsequent level-up packets on the screen you can boost your weaponry, 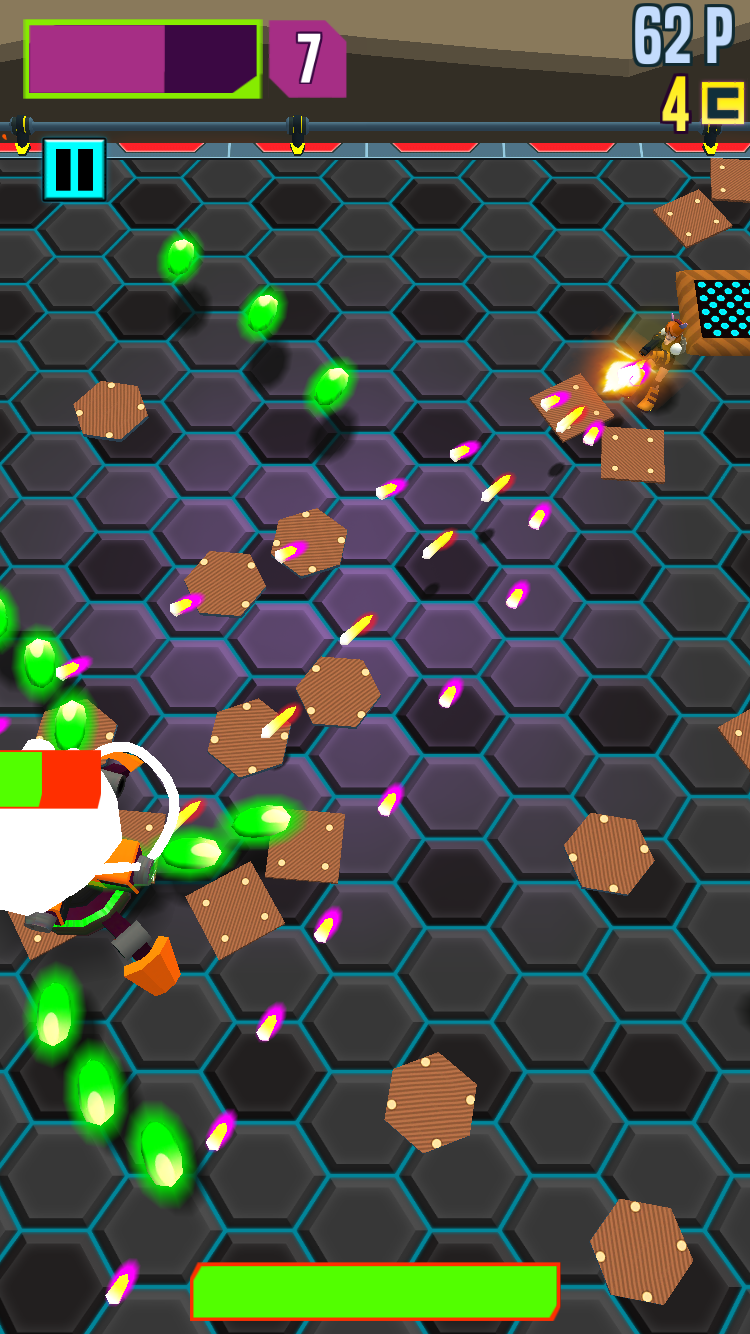 which makes the automatic aiming feature even easier to deal with. I’m talking an upgrade from a single burst fire beam rifle to a full-on Contra spread — it can make all the difference between clearing and failing a level.

Thankfully enemies are varied enough to spice things up, as are the hazards. One of my favorites in the latter category are these giant spiked totems of sorts, which not only serve as a means to block off zones, but also double as laser canons that fire telegraphed shots out into the arena. Enemy placements are also telegraphed and visible even if they’re off-screen by way of an easy to identity icon. So things get hectic, but not unfairly so if you’re always watching.

It’s all really fun, but the arcade formula does have the potential to fade over time if you aren’t keen on replaying the same concept over and over. Yes, it’s a randomly generated joint, so don’t expect any sort of story mode or goal to work towards. What you see with the IAP and within several sessions is basically what you get.

Frantic Shooter gets away with being free by making money off of video ads, and premium character purchases.  The former unlocks both weaponry options and characters, which is an interesting conceit in and of itself. Get this — by watching a video, you’ll unlock each bit of content for a limited time. So if you really  want that piece of poop with arms and legs (yes it’s a real thing), you can watch a 30 second ad and try him out for two hours. That, and 500 coins grants you an extra random character.

It’s an aesthetic change so you aren’t really winning out by using them, and the weapons, while essentially automatic power-ups granted at the start of a fresh session, aren’t tied to monetary purchases. In other words, it’s not a pay-to-win game. This even applies to death, because while anyone can watch a video to revive or pay coins to do so, you can’t actually buy said currency and continue to cheat the leaderboards.

There are a few things Frantic Shooter could do differently, most notably a world map, the addition of a light campaign, and unlockables that don’t involve watching ads, but you get a lot of mileage out of the free download as-is, and the developers nailed the aiming feature.  It’s not the most hardcore shooter in the world but I’ll easily be playing it down the road.