Amidst such an expansive and dynamic environment such as the App Store, it’s extremely easy to look for comparisons between different games as a means to gauge interest and also articulate your opinions on an app with a brevity that a thousand word review could never achieve. It would be extremely easy to attempt to draw parallels to the graphical style and arcade mechanics of Crossy Road (Free), the animal collecting elements of Disco Zoo (Free), slap on a score out of 5 and call it a day, and allow readers to use these facts to draw their own preconceptions, for better or for worse. However, this would be a great disservice to Rodeo Stampede (Free). While not necessarily particularly innovative, the vibrant and eclectic merger of ideas betrays a depth that truly epitomises the ‘easy to learn, hard to master’ cliche. 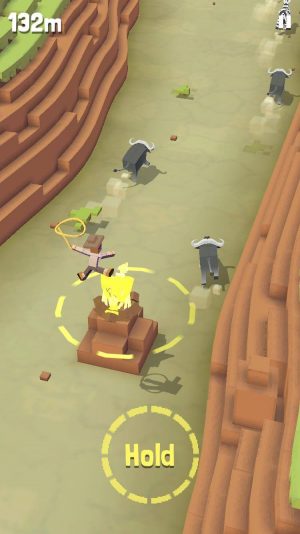 Despite this, even when taken at surface level, developers Featherweight Games and Yodo1, with assistance from Fruit Ninja artist Dan Graf, have crafted an exceptionally entertaining experience that is extremely difficult to put down. You play as a budding animal aficionado, who is looking to turn his aircraft carrier into a zoo and collect numerous animals from varied locations such as the savannah and the jungle. Borrowing tried and true auto runner mechanics, your character rides the back of one of many wild beasts – the options encountered range from buffalos to elephants and later even alligators and gorillas – and must navigate the stampede of animals ahead while avoiding obstacles such as rocks and trees. However, there is a catch – after a set period of time while riding the animal, they will become angry and react in different ways which are designed to make staying on the brute and beating your distance high score more difficult. Instead, you have the option to jump off the creature and land onto another significantly less aggravated one.

At its most basic level, that sums up the core mechanics of Rodeo Stampede, and if it were to end there it wouldn’t be a particularly noteworthy experience. Thankfully, there are many more dimensions to the game that allow numerous strategies to make it truly interesting. Firstly, after every jump the targeting circle of the lasso used to land on other animals becomes smaller. While this can be alleviated for certain animals such as the zebra while upgrading the zoo, this leads to a dilemma on how often to jump and when. This is made even more significant by the varied nature of all the different animals within each region, and the developers must be commended for giving each one their own unique traits and characteristics. Some, such as the Giraffe, can launch you far into the distance. Others like the elephant run down everything within their path, yet have a relatively short patience and are not always the easiest to use to propel to another animal afterwards.

There is also a significant variance in the angry states of each critter. Some buck around yet can reward you coins for doing so, others speed up and a few even eat (or sit on) you to permanently end your run. Therefore, there is the tactical choice in deciding to risk staying on a buffalo for extra coins and a bigger targeting area the next time a jump is made at the cost of potentially crashing and burning as the animal speeds up and gets harder to control. I found for much of the early game I rode an ostrich, which dramatically accelerates as it becomes more irate to get to significant distances quickly, yet sudden obstacles in the impressive dynamically changing environments occasionally made this an unwise decision. This degree of variance in the styles of play puts it a level above many similar arcade games, as it conjures up a sense of depth that significantly extends its longevity and will keep you playing for weeks on end. Missions, such as riding a certain amount of one type of animal or jumping a certain distance also go far in making Rodeo Stampede not simply a repetitive high score romp, and are certainly a welcome presence. 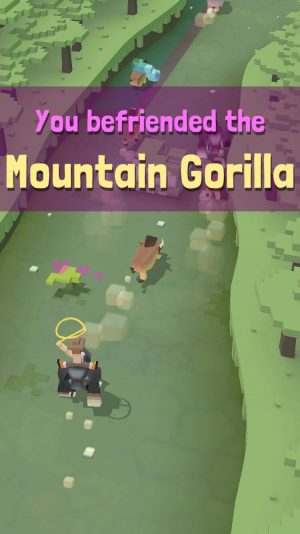 This is further emphasised by the varied environments the game offers. While only two at the time of release in the savannah and the jungle (the developer promises more to be released later), they are not merely a palette change – both the obstacles and pacing is different, and the animals to be befriended share mutually exclusive attributes that make it more than a repetition of past ideas. The jungle deviates from the fast paced nature of the savannah through adding two elements that proved to be the bane of my avatar’s existence – swamp and alligators. The former is spread around the level, and for half the animals significantly slows down their progress, which can be both a blessing and a hindrance if you are looking to make a jump off your ride. However, the remaining cast are actually entirely dependent on the water. For example, Hippos appear to lack the traditional anger state seen on the other animals in the game, and instead use the swamp as a means to recharge their speed; when they come to a stop from too much land-based travelling, the run comes to an end. Alligators are also important in making the jungle such a different experience, as unlike virtually every other animal in the game, they do not stampede up the screen. Instead, they prove to be obstacles in their own right and attempt to eat other animals – including the one you are riding on. They must then be looked out for amidst the camouflage of the lakes, and either navigated or landed upon. Despite the outrage they caused in ending way too many of my runs prematurely, I appreciated their presence as running as fast as you can on autopilot as was second nature on the savannah level was no longer a viable option. 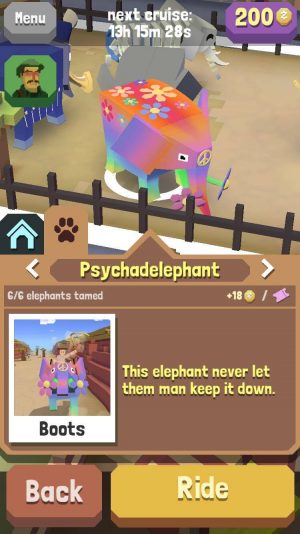 Of course, the prominent zookeeping aspect of the game must be mentioned, however anyone expecting it to make up half the game is likely to be disappointed. Don’t go into Rodeo Stampede thinking it’s the next Zoo Tycoon – in reality, the giant floating animal containment platform is really a glorified menu to allow you to upgrade the abilities of numerous creatures while displaying the varied beasts found throughout the environments. At the end of a certain period of time, you can open the zoo to customers to receive a hefty entry fee which is affected by the number of animals that have been caught. You can also extend the ship to allow you to capture new animals and fly to different habitats, however that essentially sums up the extent of the zoo management aspect of the game. Despite this, it is a charming way to encapsulate the concept of the game, which is further extended by being able to reminisce over the different panned photographs of the rare animals you have captured throughout your career. And at the very least, seeing your zoo expand and become full of colourful creatures is enjoyable to witness.

One of the main ways Rodeo Stampede manages to make animal riding and collecting so much fun is with its extremely vibrant and eccentric graphical style. While from a glance it may appear to be yet another voxel-style Crossy Road clone, it goes a level above with significant attention to detail, which is most evident in the rare creatures that are found throughout the game. Of each core beast, there are numerous, slightly less realistic variants such as an ostrich in knight’s armor, a wild boar in office clothes or a particular highlight, the Psychadeliphant – amongst many, many more. Most of these are found at later distances in the stampede, however some only appear when certain hidden objectives have been achieved, such as riding every single critter in turn or eating thirty animals on top of a lion. The graphical style accentuates the individuality of each variant extremely well, and specific features such as fire coming out of the back of a flaming buffalo as it bucks adds that attention to detail that makes animal collection perhaps the highlight of the game. It would save a bit of frustration having some sort of list of the animals that have been caught and what the conditions are to unlock those that haven’t to make it less of a shot in the dark in unlocking some of the wildlife, however this is a really minor qualm, as finding that elusive Trojan Zebra is an extremely satisfying feeling. 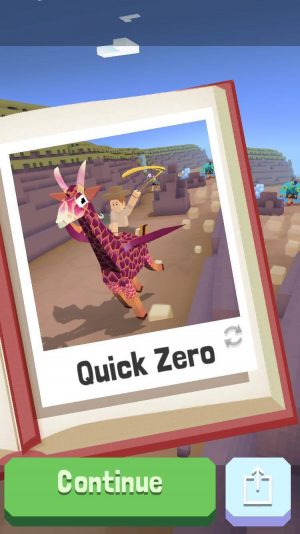 If anything, Rodeo Stampede only stumbles in its attempts to try and lengthen the content over a longer period of time than most gamers will give it. For example, a select cast of critters are only found through boss missions, which are in turn unlocked by completing a large number of regular missions. I found the variance in puzzles and obstacles that the boss challenges offered a refreshing change of pace, however after many hours within the game I have only encountered two, which is a shame as they are seeming not replayable. The missions are also heavily affected by the free to play monetisation of the game. I must stress that Rodeo Stampede is a fantastic title that does not restrict your play through obstructive ads or timers – but if you’re looking to progress to new areas quickly, you’ll be watching a lot of in game videos to reset the mission timer or double coins. While the developers have already said they will address this on our forums, and there are some in app purchases for a coin doubler and even rare animals that you haven’t been able to befriend yet, it does mean anyone not willing to slowly progress over the course of many weeks may be somewhat disappointed. A change of the audio track for each successive area would also go far to satiate my only other minor issues with Rodeo Stampede, but even these did not prevent me having a very enjoyable experience.

There is a large chance that many gamers will take one glance at Rodeo Stampede and ignore it because of similarities to other apps or their preconceptions of what such a graphical style and monetisation system may entail. By doing so, they would miss out on one of the best games on the App Store this year – with a surprising amount of depth coupled with interesting and unique ideas that will only grow with developer support over time, Rodeo Stampede is essential for anyone looking for a casual experience that is hard to master and even harder to put down.