As you’ll find out shortly on this week’s episode of our podcast, I gush long and hard about this week’s Game of the Week pick Tiny Titans ($3.99) from developers Grumpyface Studios and Cartoon Network Games. Which means… I’m sort of tapped out as to what more I can say about this title, other than if you enjoy Pokemon-style collect-and-battle RPGs and/or have an affinity for the Teen Titans GO! animated show, you’re going to want to pick up Teeny Titans immediately. That’s not to say this is simply a fan service game, though. I actually don’t know anything about Teen Titans, the comics or the two animated series, though I’ve enjoyed the random episodes of Teen Titans GO! that I’ve happened to catch here and there over the years. So it should be duly noted that you don’t have to be a fan of or even know what Teen Titans is to enjoy Teeny Titans. 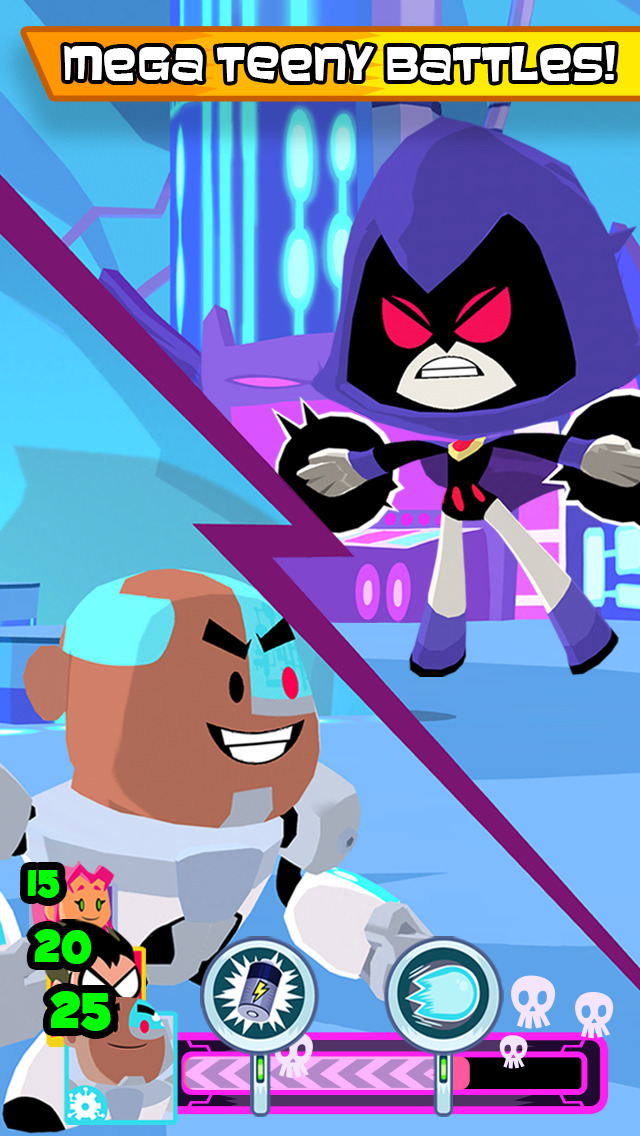 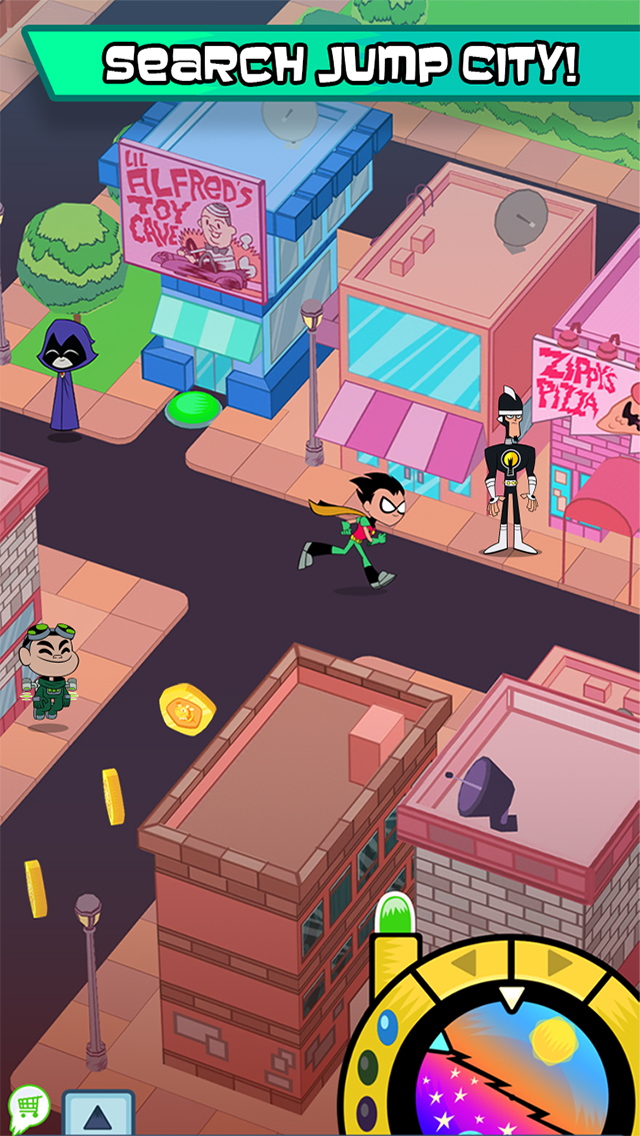 As mentioned Teeny Titans pays homage to Pokemon in a similar fashion as Pocket Mortys (Free) did earlier this year. However, Pocket Mortys is to me a fan service game first and foremost, as the story, humor, and characters are all top notch, but the actual battling mechanics feel a bit shallow and there’s not much differentiation between all the different Mortys in the game. This is not the case with Teeny Titans. The battling is much deeper, using a pseudo-real-time turn-based system similar to the “Active Time Battle" system from some of the Final Fantasy games. A meter is constantly filling at the bottom of the screen and at various intervals, depending on the character, you can cast a special move that’s either an offensive attack, a defensive maneuver, or some other ability. There’s actually a crazy amount of strategy around what abilities to use and when all while managing the meter to its fullest. 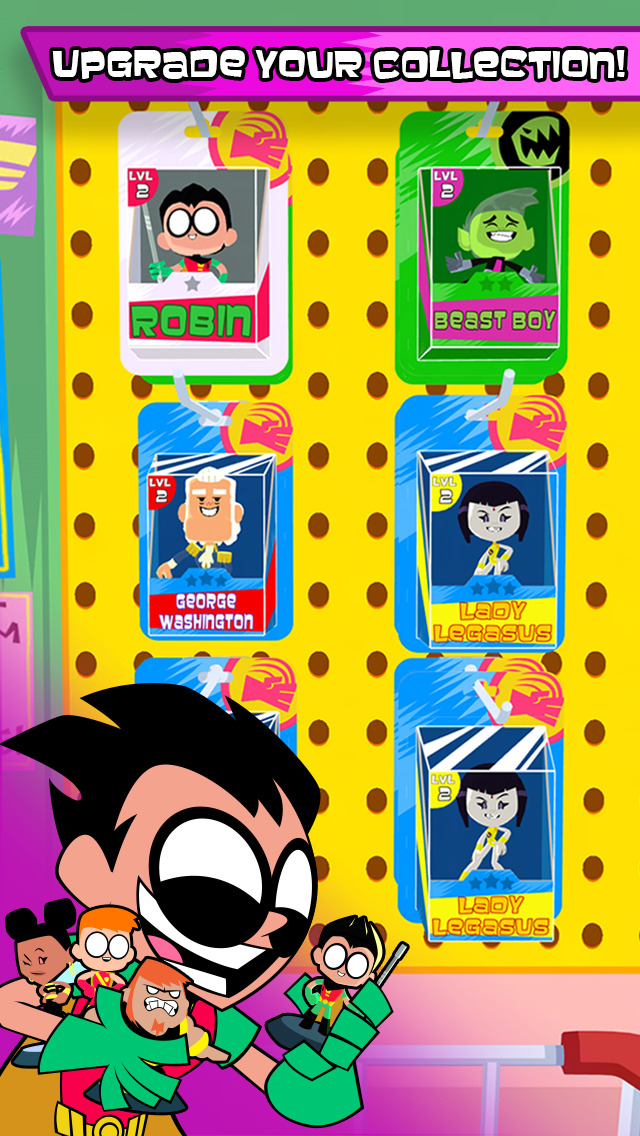 Then there’s the characters in Teeny Titans. Oh, boy is this a deep rabbit hole. Many of the characters you’ll know from the DC Universe, though in their Teen Titans GO! style. Most characters have multiple variations, and they can all level up through battling which can unlock new moves, features, and points to sink into their stats. There’s also a whole modding system where you can add a special mod chip to the bottoms of your figures that can give you some sort of stat boost or special ability. There are a whopping 70 characters to collect and upgrade in all. The characters have a wide variety of strengths and weaknesses, which makes it so much fun to try out new combinations of characters and see the results. Pretty much any kind of play style can be achieved by mixing and matching, and again, there is a ton of strategy when it comes to setting up your teams to face opponents.

Oh, and I almost forgot the best part: Shopping! It’s such a minor touch really, but it has a major impact. When you go to various stores in the game hunting for new figures to collect, the shopping experience itself is a ton of fun. Toys hang on racks in their cardboard-backed packages and you can actually sift through the racks looking for figures that might have been mis-stocked. I know for a fact that when I was a kid and I saw a cool toy I wanted, I totally hid one behind a bunch of others, just in case, you know? Or perhaps you’ve been shopping for something only to find that the store is out of the thing you want, but undeterred you start digging through the surrounding items and lo and behold you find the thing you’re looking for. This experience is replicated perfectly in Teeny Titans, and as one of our forum users put it, “The inner child is well and truly released."

Here I go getting all long-winded again. I could go on and on about Teeny Titans, but lets save that for another time. Just know that this is one of the deepest and most content-rich games available on iOS, and feels like it could easily sell for ten times the price on 3DS or Vita. Oh, and I can’t forget to mention that this entire game is just $3.99 with no IAP, which is surprising as this type of game is ripe for free to play. Don’t go thinking this is some kids game because of the Teen Titans or Pokemon affiliations. Heck, I don’t know anything about Teen Titans and I’ve never played a Pokemon game before, and I’m flat-out obsessed with Teeny Titans. And I’m in my mid-thirties. Do yourself a favor and grab this incredible game. It’s the type of game that once the story has been beaten, once all the characters have been collected and upgraded, I’ll still be playing battle after battle just for the sheer fun of it.