Word games and mobile go together like peanut butter and jam, and like that classic combo, you don’t have to look very far to find an example. You get to a point where you have to wonder what more can be done with the genre beyond dressing it up in different themes. AlphaPit ($2.99), the latest game from Word Forward (Free) developer Shane McCafferty, has a few new ideas. For the most part, it builds on the frame work laid down in Word Forward, but there are some unusual design choices that make AlphaPit feel different, if not necessarily better. While I think the developer succeeded in making something that sets itself apart from the very large crowd, the game never truly finds an enjoyable structure to call its own. 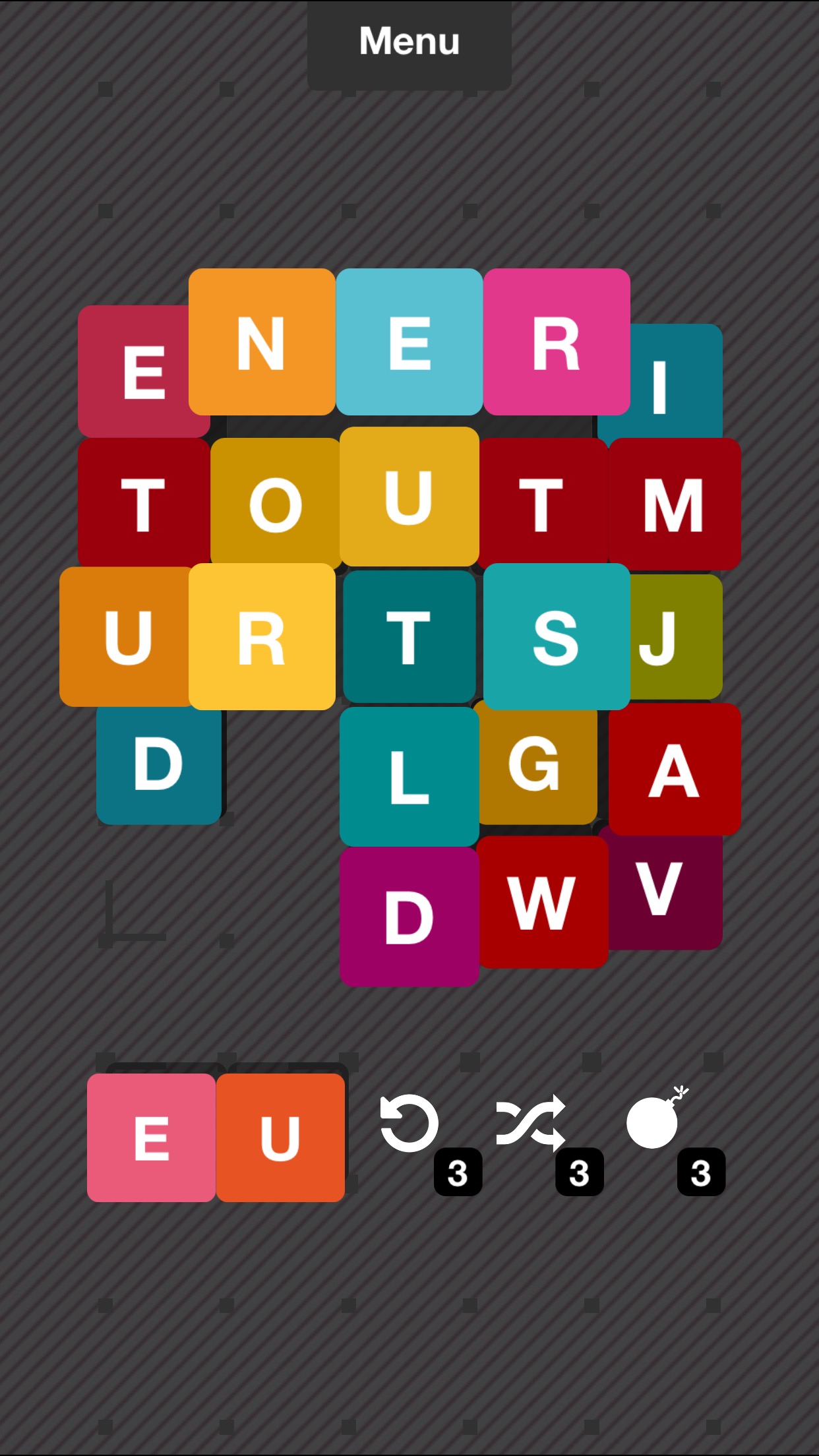 AlphaPit is a stage-based word game that has you trying to use up every letter on the board. The letters are set for each stage, and the farther into the game’s 200 levels you go, more difficult the combinations will be. All you do to make a word is drag your finger along the letters in the desired order. Words must be made up of at least three tiles, but you can make them a lot longer if you like. You can combine letters vertically, horizontally, or diagonally, but be careful not leave any letters isolated. Your only recourse for leftover tiles is to use your items, which allow you to take back a move, shuffle the board, or outright remove a single tile. These items are limited, but can be refilled by watching an ad, the only means of monetization in the whole game. You’re also given two letters which you can swap for a piece on board whenever you like.

The main gimmick, however, is your ability to change the letters on the board to a limited extent. Tiles are set at different depths, and tapping or holding will move them higher or lower, switching them to the previous or following letters in the alphabet with each press. At most, you’ll be able to move one to three letters away from the letter that was originally there, but it gives you a lot of wiggle room to play with. You might think that it would make the game too easy, but as you play through the levels, you’ll come across some very tricky clusters of tiles. Even on earlier levels, it’s easy to paint yourself into a corner if you’re not paying attention. A bomb or two will get you out of most pinches, however. 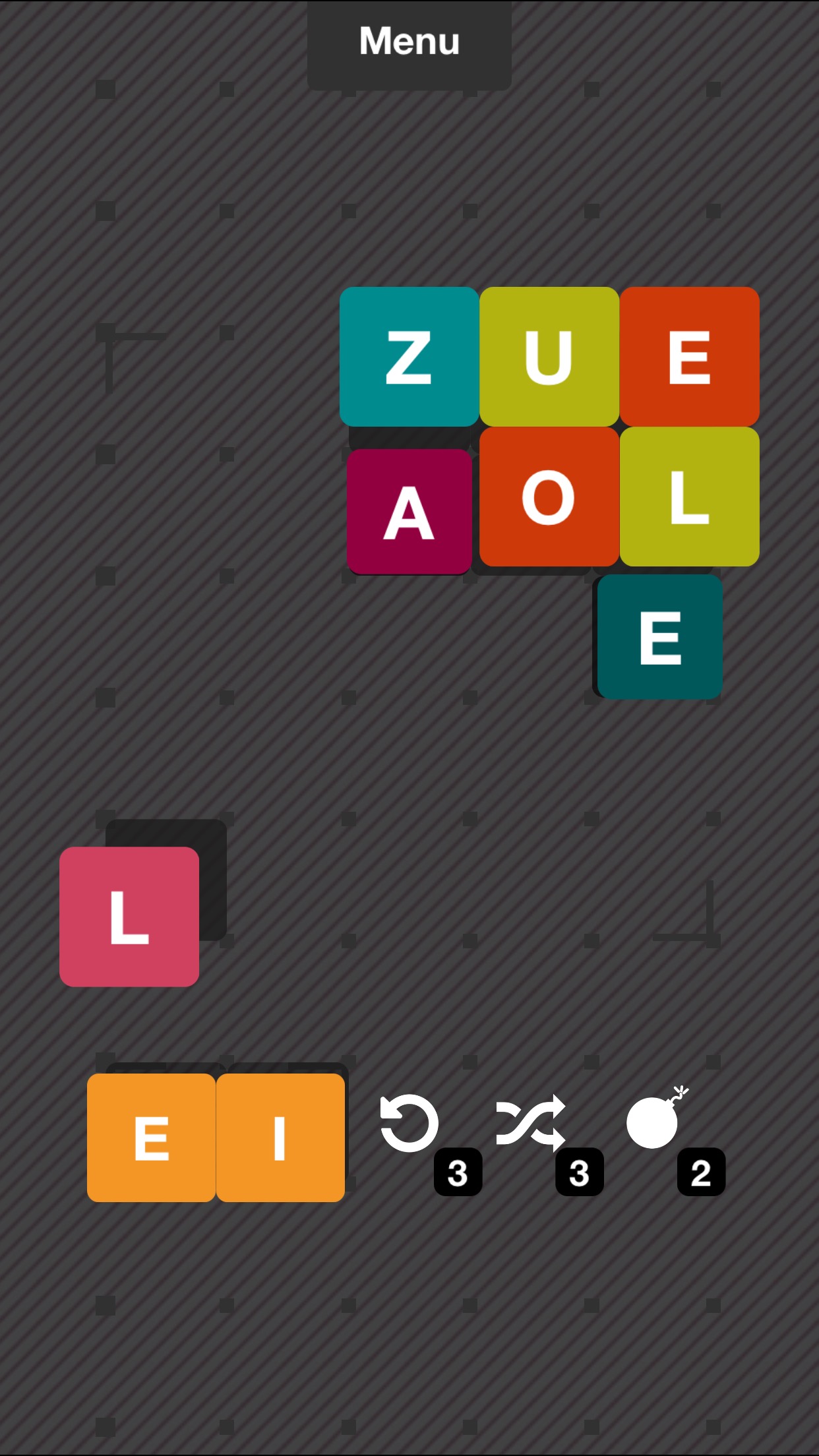 I suppose that’s one of the big problems I have with the game. Theoretically, as long as you don’t mind watching ads, you have a limitless supply of items at your disposal. There’s no penalty whatsoever for using them, apart from knowing deep in your heart that you needed to. The game doesn’t keep any sort of score, as near as I can tell, and there’s no identifier for levels you cleared by relying on items. The lack of a scoring system causes another issue, too. Basically, there’s no incentive to make bigger words. You’re almost always safest making the smallest words possible, being careful not to leave any tiles behind as you go.

The goal of using up every tile puts a lot of pressure on making the right moves, so while you might see a fun word you want to make, you’re likely better off sticking to ‘bat’ and ‘cow’. Being strict in its rules yet lenient in allowing players to cheat their way through, with no scoring system to keep things honest, AlphaPit has a weird feel to it. It feels stressful yet hollow, prickly but pointless, and just all around not terribly enjoyable, at least beyond the basic pleasure of stringing letters together and watching them disappear. I like a lot of the ideas at play here, such as the defined levels, the letter-turning mechanic, and the general aesthetic, but it feels as though something important is missing to tie it all together.

At the very least, you won’t lose out much by trying it. The game is free-to-play and has no IAP whatsoever. Refilling your items requires viewing a video ad, but that seems to be the only way the game is monetizing. The strangest thing is, I think the game is most enjoyable if you simply use up all of your items immediately and proceed through the rest of the game as though the ability to refill them isn’t there. It’s going to be a long, frustrating road, but I think that for AlphaPit, it’s the best one. The game has support for a Game Center leaderboard that tracks how many levels you’ve finished. No achievements, however.

While I applaud the developer for breaking from genre traditions and trying something different, AlphaPit seems like a game that hasn’t yet found a new plan to call its own. It’s certainly a well put-together game from a technical and artistic standpoint, but that only counts for so much when the gameplay itself is lacking. You certainly could pick your way through the game’s many levels, and you might even find it passes the time nicely. I suspect, however, that most players would have a better time with one of the more traditional examples in the genre.