In its first significant limited time event, the characters from Pixar’s The Incredibles are currently available for unlocking in Disney Magic Kingdoms (Free), the freemium city (or rather, amusement park) builder from Gameloft.

After Mickey and Goofy discover something is wrong with the park, players are offered the opportunity to unlock Mrs. Incredible. Succeed in this mission and the rest of the mission is unlocked, which involves collecting a new secondary currency to purchase/unlock new characters and buildings while completing new missions that center around those unlockable characters. The end result is to unlock as many heroes as possible to prepare for the Syndrome invasion. 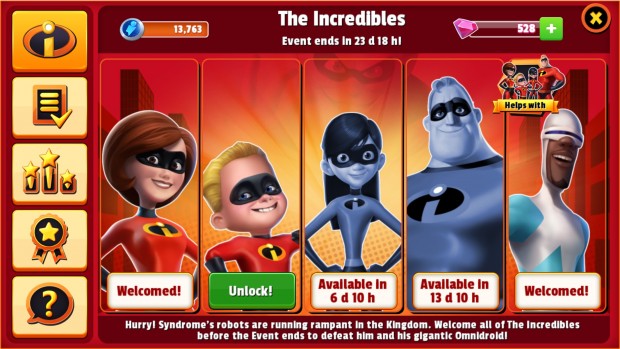 While timed events are certainly not a new thing, this is the first one that actually offers a pretty large selection of characters to unlock. It also offers a pretty nice diversion from the usual long tail of slowly accumulating items and magic for the regular story.

Players have another three weeks to unlock everything and complete the story so jump in now if you want to collect those characters.