Developer XperimentalZ Games has a vibe to its games that I can really appreciate. These games feel like they fell out of some parallel timeline where arcades stayed healthy and full of a variety of game types. A place, time, and dimension where games made about as much sense as a 1980s action movie, and took deep pride in that fact. I’m a big fan of XperimentalZ’s previous release, Pixel Boat Rush ($0.99), a wild side-scrolling action boat racer, and when I heard the developer was tackling a pinball hybrid next, I was pretty excited. Unfortunately, as the release date of Pinball Breaker Forever (Free) approached, so too did a ton of RPGs, which meant I couldn’t get to the game I had been looking forward to. Worse, everyone else at TouchArcade got busy at around the same time, leaving Pinball Breaker Forever to slide by without a review. No, we can’t have that. 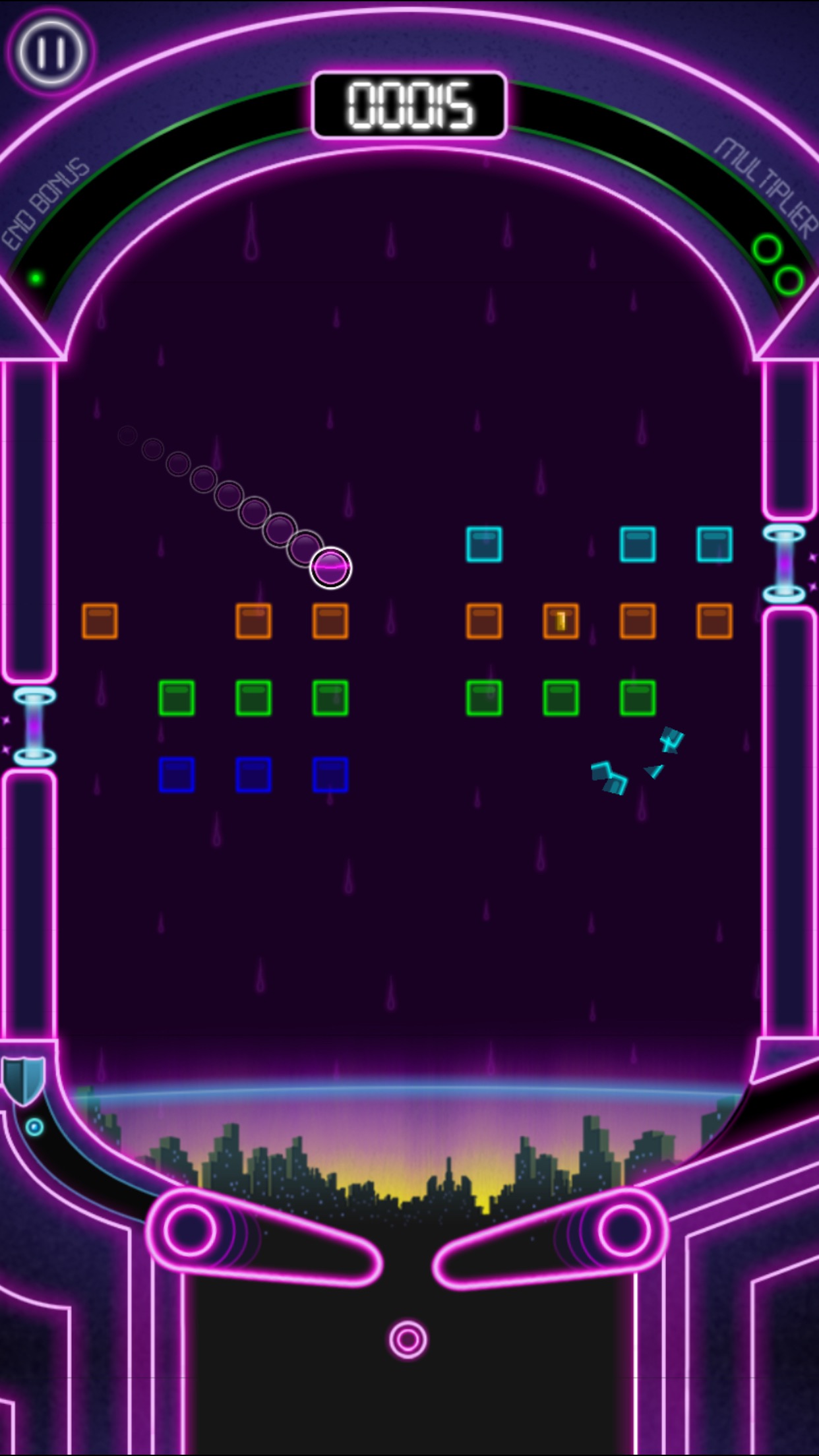 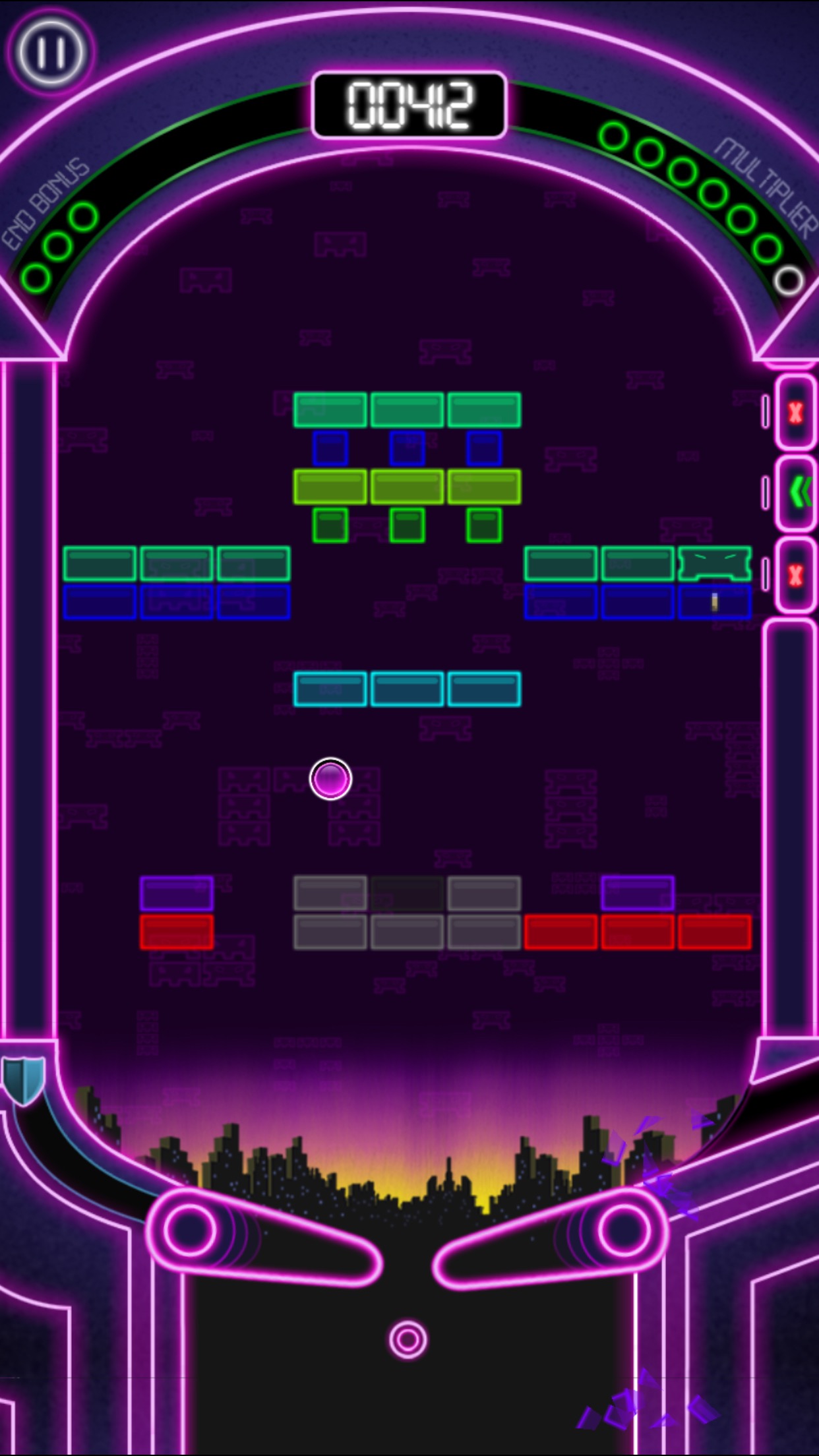 Pinball Breaker Forever looks like a pinball game, and in some ways it is, but it’s really more like Breakout/Arkanoid with a different means of delivering the ball, along with a hint of Space Invaders for good measure. Block arrangements appear from the top of the screen, and you use two pinball-style flippers to lob a ball up at them in order to destroy them. The blocks will slowly descend upon the city you’re protecting, and as they do, you’ll see their true faces. Clearly, they are evil, colorful aliens. If they touch your city once, you’ll lose your shield and the screen will be cleared. If they touch it a second time, it’s game over. You don’t have a set number of balls, so sinking the ball won’t automatically give you a game over. It will, however, make the blocks jump down a fair bit, getting them that much closer to your precious city. There are ways to earn extra shield charges, but it’s best if you can stave off needing them for as long as possible. The blocks will appear endlessly, and in increasingly difficult patterns, so you’ll meet your end sooner or later.

You’re not alone out there, however. A variety of power-ups will appear encased inside certain blocks, and you can also trigger a variety of bonuses by making skill shots on the sides of the play area. When you first load the game up, you’ll only have access to a few of these, but you’ll be able to unlock more, and power up your existing ones, by spending coins. Coins are collected while playing, but you can earn them 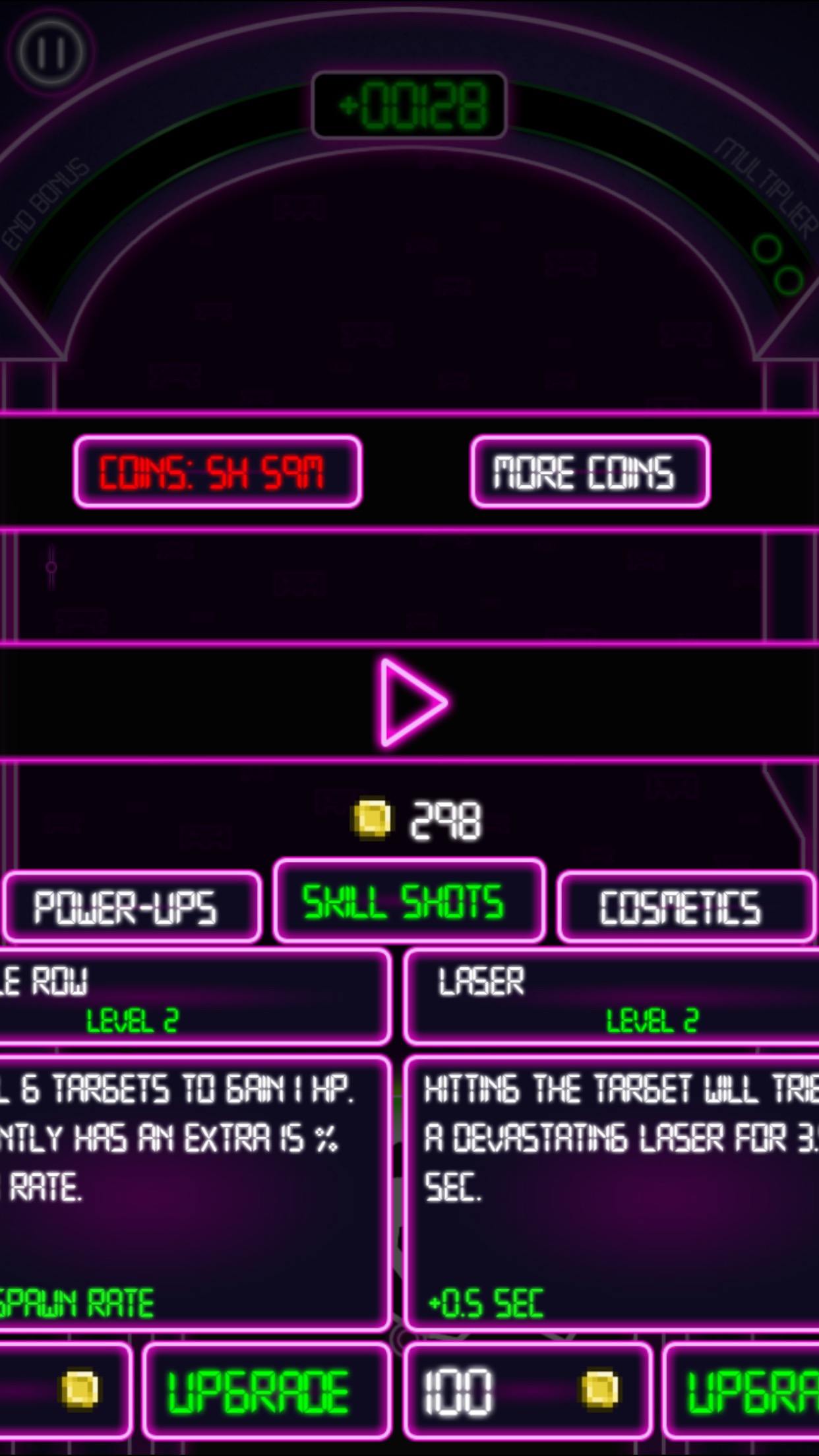 in other ways, too. You can get them by watching ads, checking in every six hours or so, or through the more direct route of buying them via IAP. The game is fairly generous with them, in any case. Prices scale up as you go, but you can usually buy something after every game or two. As you improve your bonuses, you’ll find yourself lasting longer and earning higher scores, which naturally means you’ll be collecting more coins. In addition to tangible in-game benefits, you can also use your coins to buy some cosmetic enhancements. Those can get a little more pricey, but it’s certainly worth looking into if you want a change of scenery.

The game’s presentation is making some obvious overtures to the 1980s, with neon lights and a synth-heavy soundtrack. Personally, I think it’s great, but I grew up in the 80s and have quite a bit of nostalgia for them. Your mileage may vary with that. At the very least, it’s a clean-looking game that moves at a smooth frame rate. It takes a little while to learn what all the symbols and skill shot bumpers mean, but once you know what’s what, they’re easy enough to distinguish at a glance. Apart from the coin IAPs and the ads, there’s also an IAP called the Valhalla Pack that removes the non-optional ads and doubles your coin intake. It costs $1.99 and effectively turns the game into a reasonably-priced premium title. You’ll still be able to watch ads if you want to earn extra rewards, but you’ll never be forced to see one if you buy that IAP.

There’s just one fly in the ointment, however. If you come at this game looking for a good round of pinball, you’re probably not going to be satisfied with the physics. They’re really unrealistic, so nothing moves the way you’ll expect it to if you’re a veteran of silverball. Everything is too light, giving the ball a weird hollow feel. But the pinball portion of the game, in spite of the title, is really just a means to the end of playing a twist on Breakout. With that in mind, it was easy enough to kick my brain into another track and just enjoy Pinball Breaker Forever for what it is. It only got frustrating when I was trying to make very precise shots and things weren’t coming out quite the way my years of experience taught me they would. Again, your mileage may vary here, too. I suspect most won’t care that it feels different from the real thing.

Pinball Breaker Forever is a compelling game wrapped up in a slick package. Swapping a paddle for flippers puts a nice spin on the the classic Breakout formula, one that works far better for touch controls. While I’m certain I’ve seen this kind of hybrid before somewhere, it’s rare enough that it feels really fresh to play. The progression of unlocking and upgrading power-ups is very rewarding, though it does interfere with the scoring system until you’ve got everything unlocked. Diehard pinball fans will likely want to stick with the usual suspects, but if you’re looking for something different or at least open to the idea, Pinball Breaker Forever is a most tubular sensation.