As we all know, love it or hate it, freemium is a concept that is never going away. That said, there is a very specific subset of freemium that I like to call freemium fan service games. When a popular franchise or intellectual property wants to cash in on their loyal fan-base, slapping together a freemium game set within that world seems to be the way to go. But you know what? I love it sometimes. I’m pretty susceptible to some good fan service myself, and sometimes; not often, but sometimes, it makes the whole game worthwhile. Games like Star Trek Timelines (Free), while largely disliked by our community, still appealed to me as a huge trekkie, and the fan service within that game was fantastic. Well, if you’re partial to the ‘Tales of’ franchise of JRPG’s, then Tales of Link (Free) is the freemium fan service game for you, and has nothing to do with The Legend of Zelda if that’s also where your mind immediately jumped. 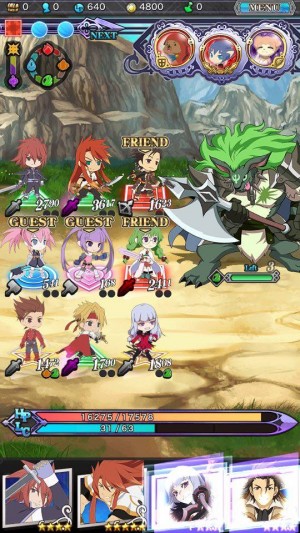 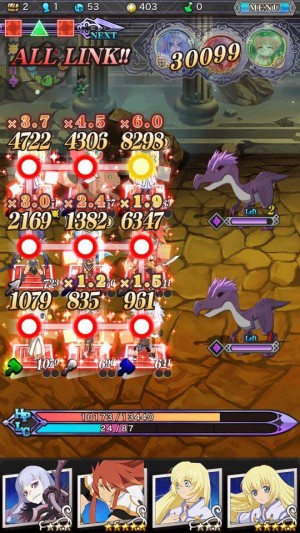 Tales of Link is conceptually similar to FINAL FANTASY ALL THE BRAVEST (Free), but not complete trash. Despite being a simple take on a match three RPG, it has the soul of a Tales game buried somewhere inside, even boasting a proper traditional Tales anime opening with a story that actually has made me smile several times. The fan service comes from the crossover nature of the story. Heroes from pretty much all the major Tales games are here, sharing one world. It’s like most monster/hero collecting games, but with people, and sometimes those people are from Tales of Symphonia, and my head explodes. If it isn’t blatantly evident, I’m a big fan of the Tales franchise. Symphonia was my first, way back in 2003, and I’ve played most of the main franchise entries since.

You are the Great Savior. Yes, you, Dan, sitting in that chair reading this review. You were prophesized by the Goddess Leonne to save the world from the seeds of ruin, which are sprouting monsters called ruinators, the main things you’ll be fighting in this game. You’ll do this with your stonecanting powers, which allow you to bring forth great heroes from the past games using items called Hero Stones, one of the main currencies. You’ll do this alongside Sara, the real main human character besides yourself, other Sarah, sitting in that chair reading this review. Plus a cute lil’ fella named Lippy, a sprite sent from the heavens to find you. So your standard JRPG book of nonsense words story. But one that actually has some neat moments. It doesn’t take long to run across familiar and beloved Tales characters, who might even join your party of 9 heroes as guest heroes, and the writing of their characters is actually pretty spot on. 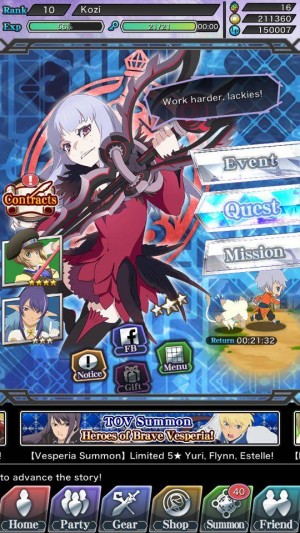 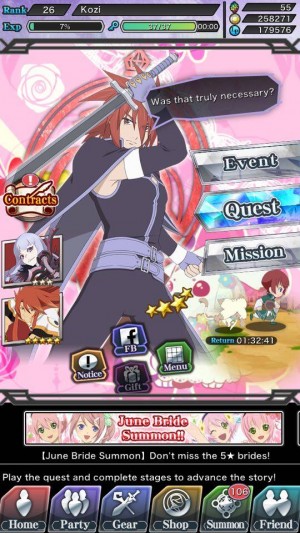 On one side of the screen you’ll have a group of heroes with various different colored shapes under their feet. Your goal is to make them hit the things on the other side of the screen until they stop existing. You can do this by matching or linking them via those colored shapes. The order that you match heroes in actually matters. Each has their own stats and their own damage. The higher a hero is in the chain, the bigger a damage multiplier they’ll get. So you’ll want to finish the chain off with your superstars. The final hero in the chain also gets credit for the kill, should the enemy actually die. Heroes actually have passive abilities and artes (Tales game version of a special ability) which will level up with the requisite number of kills. There are also status effects like sleep and paralysis that make your heroes useless for a round, but not completely. You can still use those heroes lower in a chain to get the multiplier up. You don’t actually have to link anyone, and can send heroes off one at a time, either to kill weak foes, or to set up an All Link, where every hero is the same color. The hero at the end of this mega chain will get a special animation to go with their Mystic Arte, and it’s very satisfying.

There is actually an insane amount of complexity here. Each hero also has a damage/attack type, such as thrust or slash, and they also have an element type. The element types come into play with the Guardians (Tales games version of a summon), of which you can have three, and which bolster various elements. The upcoming color/symbol combos are displayed in the top left corner like Tetris pieces. You also have an LC bar below your HP bar, which fills by 1 point for every link in a chain you make. You use this bar to activate your leader’s, one of their two sub’s, or your friend’s leader’s special ability. This usually consists of a heal, boosting the damage of a specific color for the next round or two, or changing certain symbols into other symbols to build larger chains. 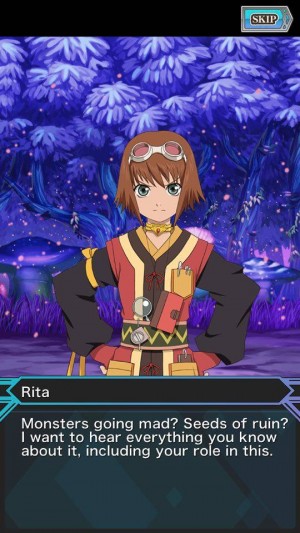 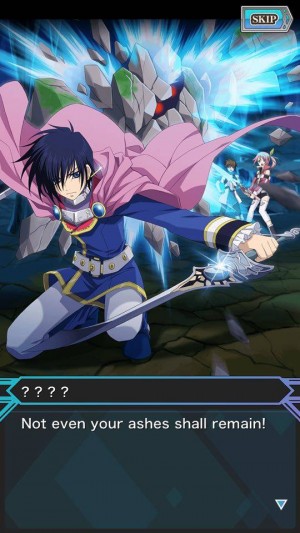 Outside of battle, you have stuff like gear, which you can fuse to level up or evolve to increase the level caps. You can also fuse duplicates of the same heroes to break their level limit, making them even stronger. There are also various currencies. The Hero Stones that I mentioned are the most common reward for completing quests, which are the story missions. You also have Gald (Tales gold) for gear stuff, and LP for leveling your heroes, and Hero Points for summoning new gear and guardians, which is also used for bringing a friend into battle with you. You’ll usually be given 3 random players to bring with you, and you can send them a friend request after. It was very reminiscent of another freemium fan service game from Namco Bandai, Digimon Heroes (Free).

There is a stamina bar, but assuming you focus on the main story questline at first, you’ll constantly level up and extend it, so it really doesn’t become a problem until later. Early on in the game, you’ll have access to a special beginner hero summon pack. Every quest you complete, along with contracts and other side things, net you a Hero Stone. If you save up a hundred, you might be able to cheese the system and buy two beginner packs before the option disappears, as you can usually ‘buy again,’ and I saw that option but didn’t have the currency for it. You can do this without spending any real world money. It’s definitely worth it either way. I’ve been playing for weeks and I haven’t had to spend real money yet. The game is kind in the first month, with daily log in bonuses that shower you with currency. But you’ll want to be a bit selective with who you level up. You’ll have loads of heroes before long. If you care about strategy and synergizing heroes and guardians and gear and all of that, you’ll want to spend wisely. Personally, I just put my favorite characters in the party and don’t care.

Besides all of that, there are special events with specified rewards, missions which are your basic freemium timer quests, contracts which are like your daily check lists, leaderboard tournaments like you’d find in Tap Titans (Free), and more. There is a ton of content and it hasn’t gotten old yet. Too much to get into in this review. Just don’t expect to enjoy the game for long play sessions. It’s not really built that way. And fair warning, the game is always online. But collecting your favorite heroes from past games elicits a kind of fangirl giddiness in me that is rare to see. I don’t know if the app can just sense my love for Symphonia or if it expects that love from everyone, because Symphonia characters are easily the rarest. I managed to snag Lloyd and freaking Kratos , who is just as ridiculously powerful in game as you would expect from his character, with a passive arte that heals the party and a leader ability that changes three symbols into one, but that’s all I managed to get. All I can say is that this is definitely a worthwhile download, maybe even if you aren’t huge into Tales games, but most definitely if you are.

Hey Namco! Can we get some old school Tales ports to iOS now? I need an excuse to play those early games. But you know… not like the last time. Please and thanks.