When the Apple Watch released, a number of developers attempted to take advantage of the buzz by either updating old games with new features, or by releasing new games specifically designed with the Apple Watch in mind. One of the more success of the latter group was Lifeline ($0.99), an interactive fiction game that had you guiding a student named Taylor who had been stranded on a moon. As with most games in this genre, the game mostly consisted of reading text and making the occasional choice. The gimmick came from the way the game incorporated real time into the story. Taylor would often become busy after you made a choice, and you’d have no choice but to wait until Taylor notified you, via your watch or your device, that the story could continue. While the game itself was quite simple relative to other gamebooks, this element gave Lifeline the twist it needed to stand out from the pack.

We’re on the fourth game in the series now, and to be honest, the novelty of the gimmick has passed. Lifeline: Whiteout ($0.99) introduces another new character in a situation where survival seems improbable, and you’re once again the only one they can count on for advice. This time, you’re connected to an amnesiac who only knows his name, V. Adams, because it’s printed on a patch he’s wearing. He wakes up in the middle of a frozen lake in a snowy wasteland, and without any clue as to his own identity, he has no idea where to go or what to do. Nor do you, initially. Whiteout is certainly more deadly early on than previous Lifeline games have been, but it’s kind of nice that it doesn’t take too long to get going. Once you get into the swing of the story, the choices become a little easier to gauge, at least. 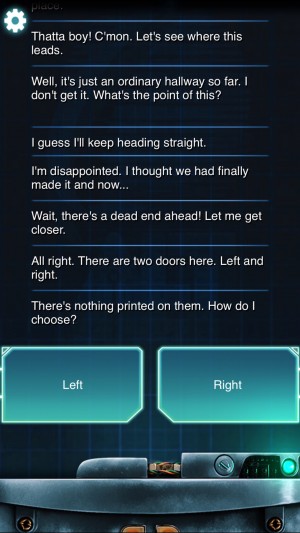 As with the other games in the series, once you’ve set Adams on a task, the game will more or less tell you to take a hike while he finishes whatever he’s working on. When the game is ready to proceed, you’ll receive a notification on your device of choice, at which point you can open the game up and keep on playing. Like before, after you’ve completed two playthroughs, you can turn on a fast mode that skips the waiting time and allows you to just shoot through the story. Those playthroughs need not be to the ending of the game, either. You can have Adams die a couple of times right away and gain access to the option. I’ve hit a point with this series where I’d prefer if that option were available by default, but it’s not a terrible hassle to get it unlocked, I suppose. Waiting in real time has definitely lost its novelty, however. While I admit it makes the experience more immersive, I personally find it annoying to play a story in little chunks, to say nothing of the downpour of notifications every time the character comes back.

I also feel like the basic structure of the Lifeline games is starting to constrict the sorts of stories it can tell. Virtually everything that happens in the game is conveyed to you by Adams. It certainly helps you get into the story, since there’s almost no requirement on your part to roleplay, but it also places serious limits on the sorts of narrative tricks the game can rely on. A further problem is that whether by the game engine or simply design, you’ll only ever be choosing between two options at a time. It feels quite restrictive compared to other games in the genre, and it leads me to feel like every choice is either irrelevant or a pass/fail situation. Perhaps worst of all is the fact that this installment of Lifeline still has a lot of choices where you have literally no information about which choice is correct and simply have to guess, sometimes with fatal results. That’s a big no-no in this genre, and while I’m willing to give a pass to a ported gamebook that was originally written 30 years ago, it really shouldn’t be happening this much in one written in 2016. 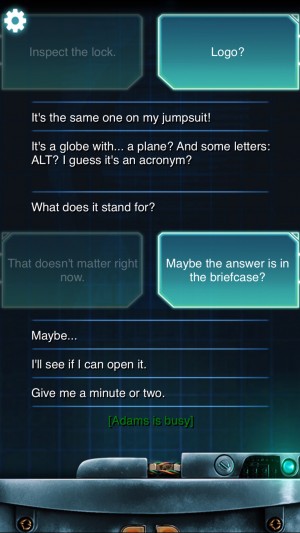 Developer 3 Minute Games has been improving with each new release in the Lifeline series, however, and that’s no different here. The pacing of the story is a lot better than the one in Lifeline 2, and there are far more checkpoints along the way, minimizing how much text you’ll have to repeat in the event you make a bad choice. While Whiteout doesn’t feel as large as Lifeline 2 ($0.99), it’s no less satisfying of an adventure. The plot benefits greatly from a tighter focus and a stronger sense of urgency, as well. Adams is in grave peril right from the start, and other than a few brief moments of respite, he’s under clear pressure right up until the end. It’s pretty easy to guess where it’s all going by somewhere around the halfway point, and it’s nothing you likely haven’t seen before if you’re a reader of science fiction stories. Still, the story is told well enough, and unlike Lifeline 2‘s prickly protagonist Arika, Adams is pretty likable.

I think the Lifeline series needs either a break or some big new ideas going forward. The series has nearly burned up its novelty, leaving a framework that doesn’t have the flexibility to compete in what is a very strong genre on iOS. For all the strides within that framework that Whiteout makes, it’s more apparent than ever that the binary choices and initial forced waiting times are keeping this series from growing the way it should. Even the unusual method of telling the story through one character’s conversations is starting to lose its charms. If you loved all of the previous games in this series, you’ll probably enjoy Lifeline: Whiteout as well, but it’s harder to make a case for the game if you fall outside of that particular category.