Apparently, merpeople are the new trend in interactive fiction. Yes, I call something a trend if I spot more than one instance. I’m pretty weird that way. Anyway, a couple of months ago, Choice Of Games released The Daring Mermaid Expedition (Free), a somewhat farcical adventure that provided a brief, enjoyable window into a fantasy world under the sea. The Sea Eternal (Free) also chooses the ocean depths as the setting of its story, but from the other side of the coin. Rather than playing an inquisitive human who accidentally stumbles upon this strange world, you play as one of the merpeople who inhabit it. In spite of this shift in perspective, the core of the story largely tries to untangle what it is to be human, or at least what it is to be sentient. It takes on a lot of very difficult questions, and although it doesn’t handle them all with perfect grace, The Sea Eternal is nevertheless quite engaging and thought-provoking. 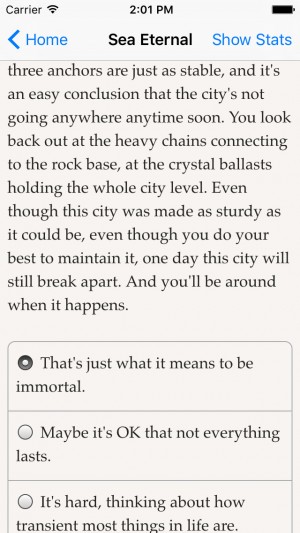 The author, Lynnea Glasser, is no stranger to these kinds of stories. Glasser’s previous works in the interactive fiction genre include the award-winning Creatures Such As We (Free) and Coloratura, both stories which use alien settings to explore some distinctly human struggles. Unlike those stories, The Sea Eternal isn’t exactly science-fiction, but its setting is unusual enough that it might as well be. You play as a merperson of your gender and sexual orientation of choice who lives in an underwater city known as the City Of Glass. All of its residents are immortal thanks to a magical orb gifted to the merpeople from the whales. As is often the case, however, that gift does not come without a cost. The merpeople basically must serve as the defenders of the whales against attacks from giant squids, who angrily assault the whales at every opportunity. That’s not without cause, mind you. The whales eat giant squids, so it’s a likely an act of self-preservation.

Not all of the merpeople are thrilled with this enlistment, but if the whales are not kept happy, they could take back their orb, condemning the merpeople to mortality. Further complicating matters is the fact that the merpeople’s memories have become quite spotty, so nobody seems to remember who made the deal with the whales in the first place and why. Not long before an important ceremony with the whales, a mermaid takes off with the orb of immortality, setting off a course of events that could potentially destroy the ages-old status quo of the City Of Glass. The game’s story covers a lot of different ideas, but the main ones it focuses on are mortality, freedom, and the reliability of memories. Would you want to be immortal, even if that means being in perpetual servitude? Would you prefer a life of comfortable ignorance, or painful truth? You’ll have to answer these questions as best as you can through the process of playing this adventure.

The quality of the writing is the biggest stand-out of The Sea Eternal. There are an awful lot of complicated situations coming together in this story, and the author generally manages to weave them together in a natural way. There were one or two points that could have done with a bit more foreshadowing to ease the reader in, but those are small blemishes on an otherwise well-told tale. I enjoyed that it was more or less impossible to answer all of your questions on a single playthrough. There are multiple occasions where you can only accomplish a few things in the time you’re allotted, and many of these activities are at odds with each other. For example, you could attend a meeting that might lead to brokering peace, or you can support one of your friends with a very important life decision, but you can’t do both. That’s even simplifying things a bit, since many of these situations have three or more different forces in play. There are even certain options that will be closed off to you if you haven’t built up a particular statistic through previous choices. 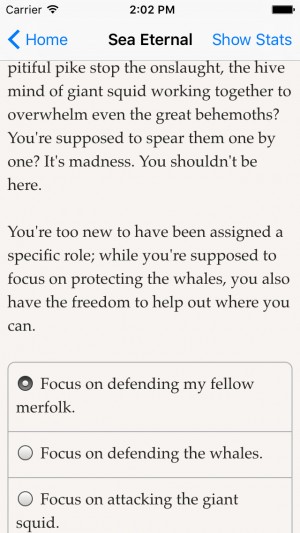 As a result of all of these conflicting schedules and goals, The Sea Eternal‘s story ends up diverging in more significant ways than we often see with ChoiceScript games. There are more than 10 different endings to discover, and some of those endings are different in very big ways from the others. Whether you choose to preserve the status quo, take your people in completely new directions, or simply focus on smaller, more personal successes, your choices have a major effect on the outcome of the tale. While there’s plenty of philosophical room for interpretations, I feel that some of those endings feel better than others, so it’s certainly worth seeking each of them out to see what they have to offer. Of course, given the weight of some of the questions explored in The Sea Eternal, none of the outcomes are perfect, and a few of them are downright horrifying from a psychological standpoint. It just comes down to what you personally value the most.

The cast of characters is somewhat small, but that gives the author the chance to flesh them out a little better than we often see in these kinds of games. Your relationships are more complex than usual, as well. Rather than representing your connections with others as a percentage bar, they’re expressed with a few words that give some additional detail as to the exact nature of each character’s feelings towards you. Building up at least a solid foundation of trust with particular characters is vital for reaching some of the endings, but that too comes with sacrifices. The game includes a romance component as well, and it feels more natural and not quite as gamey as that part of the game tends to in many other ChoiceScript gamebooks.

In spite of a few moments where it feels like it’s taking on a little too much too quickly, I found The Sea Eternal to be a very compelling gamebook that gives you good reasons to play through multiple times. It gets somewhat navel-gazey in parts, but the quality of the writing is excellent on the whole, and the choices actually feel meaningful in terms of shaping the narrative. It’s more concerned with philosophical battles than physical ones, so it’s not going to be everyone’s cup of tea, but if you have an interest in human nature, it’s worth checking out The Sea Eternal. You can try the first five chapters for free, and the rest of the story unlocks with a $2.99 IAP.