Do you like adventuring? Do you enjoy role playing? Do you like cards? Do you like rolling imaginary dice? Then I think you’re going to like Pathfinder Adventures (Free), Obsidian’s digital port of the very popular Pathfinder Adventure Card Game. I’m always interested in seeing how games translate to different mediums, and I was curious to see how this physical card game would look like – and play –  on my iPad. I’m glad to say that Obsidian did a great job turning what can be a complicated card game into a great app that though not perfect, definitely delivers a great looking game that’s relatively easy to play – at least as easy as the original rules allow it to be. 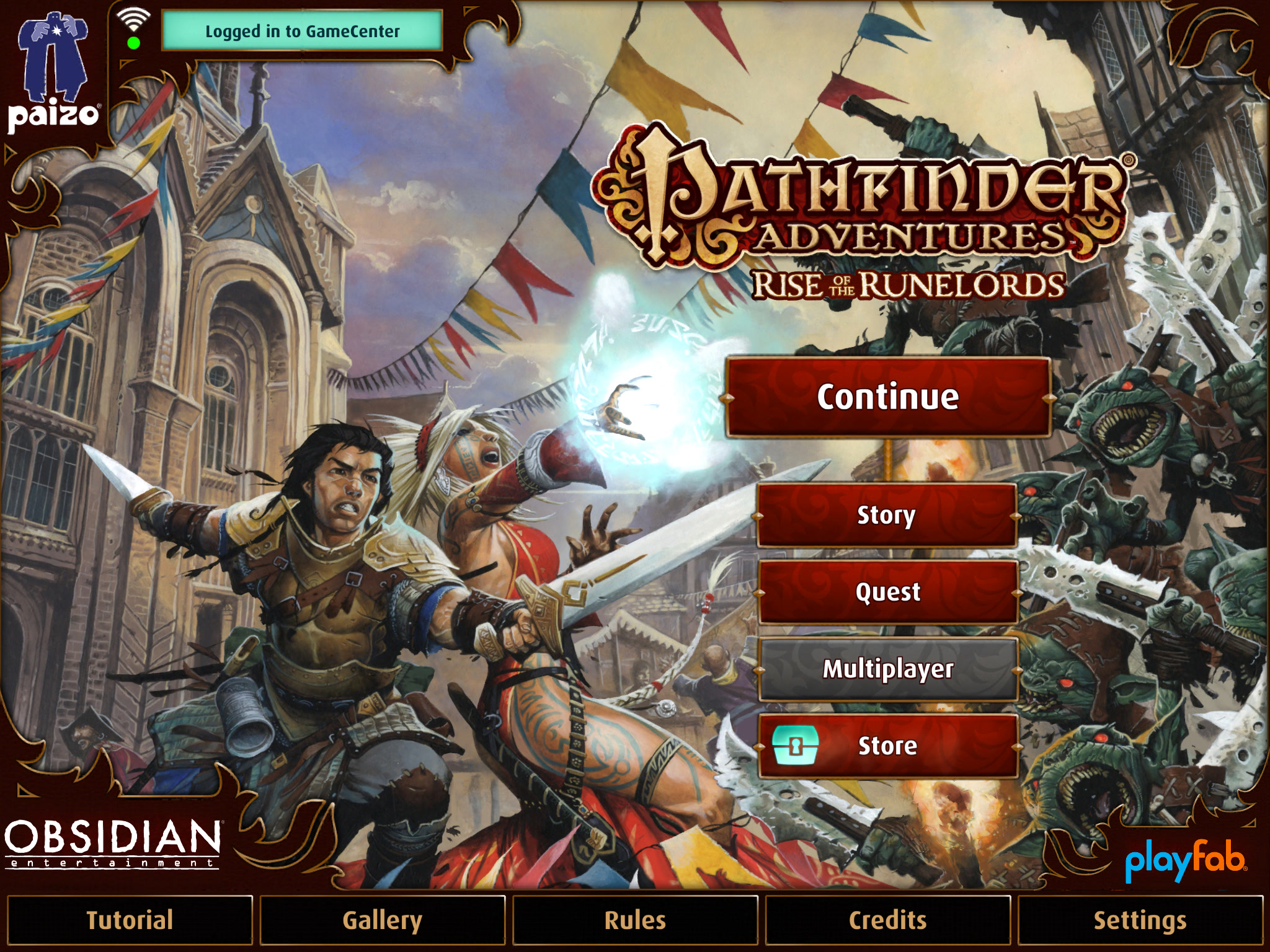 While the game isn’t the most complicated card game you’ve ever played, it does have some concepts you probably aren’t familiar with if you’ve only played CCGs like Hearthstone and Magic. The tutorial does a decent job of explaining the game’s basic concepts, and there is a full in-game rule book to help you navigate all the concepts and phases; however, what gave me a hard time initially was figuring out the various strategies. The game can be pretty hard and if you’re looking for an adventure you can enjoy at your own pace, Pathfinder Adventures isn’t it. All of the many scenarios have time limits, so you might find yourself getting a bit frustrated in your early plays, especially if the dice gods have decided to torture you that day. Know that it will only take two, three failures before the tactics start clicking, so don’t get disappointed if the dice isn’t cooperating and you find yourself failing the scenarios. 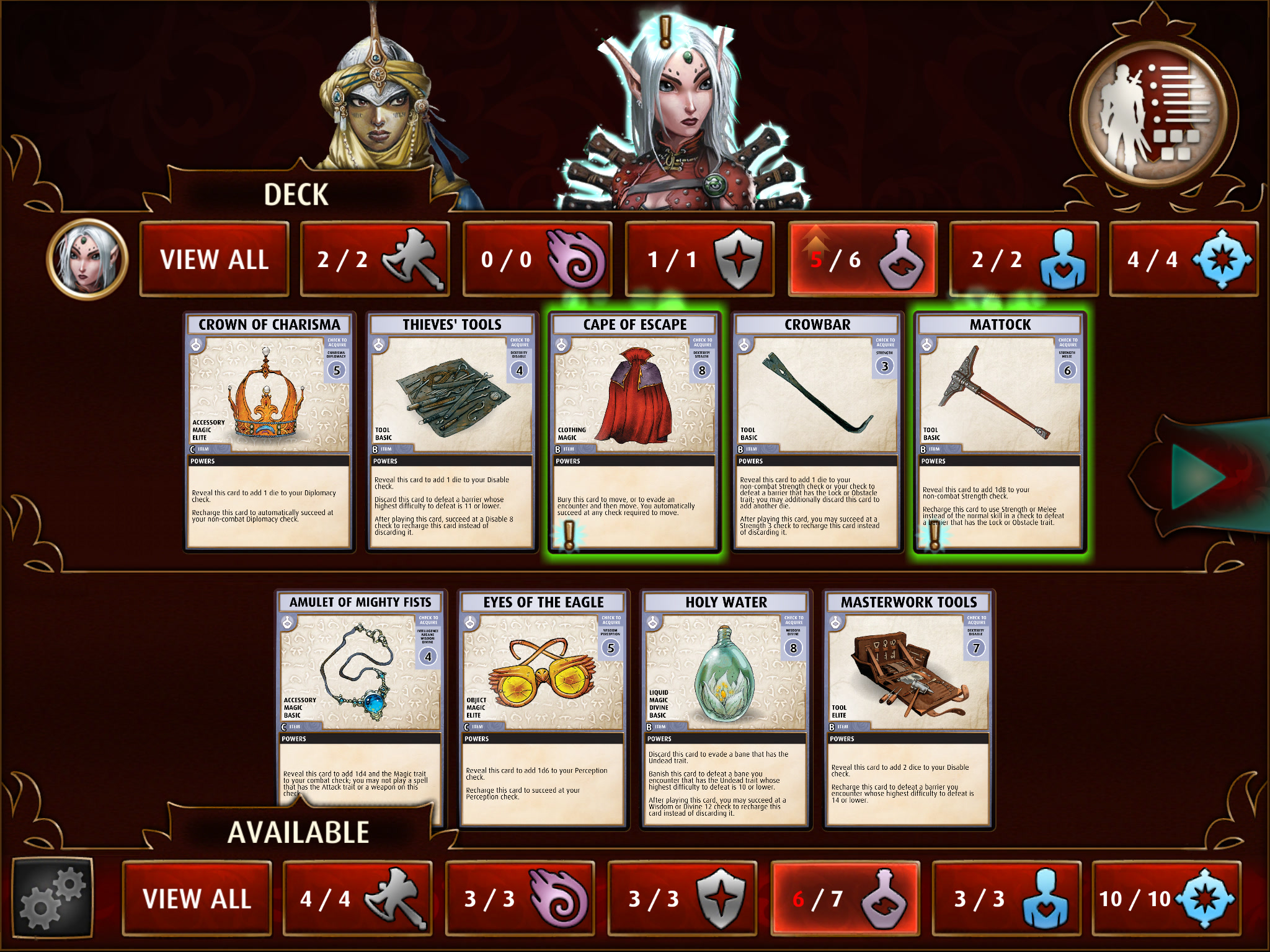 So, how does the game actually play? In basic terms, you put together a team of adventurers, equip them with various cards (that represent weapons, items, spells, companions, etc), and then go on a quest to defeat a dangerous villain and his/hers/its henchmen. Each scenario has several locations, and you explore each one with the goal of defeating the henchman guarding it and “closing" the location. The reason you close them is that if you encounter the villain in any of the locations and defeat him, he simply escapes to another open location and you have to continue hunting. As you complete scenarios, you get various bonuses (extra skills for your characters and so on) along with new cards that you use to customize your characters’ decks. And then you embark on another adventure.

I won’t get into the rules too much – that’s what the rule book is for. In general, when you encounter a card in the game, you have to attempt a check, which is a fancy way of saying you have to roll dice to either match or surpass the number on said card. If the card is a boon (a weapon, a spell, a companion, armor, etc), you acquire it by beating that number, and if the card is a bane (villains, monsters, barriers, etc), you defeat it by beating that number. In order to attempt the check, you have to roll dice, and then depending on your characters skills and any other additional cards you play, you either pass or fail the check. 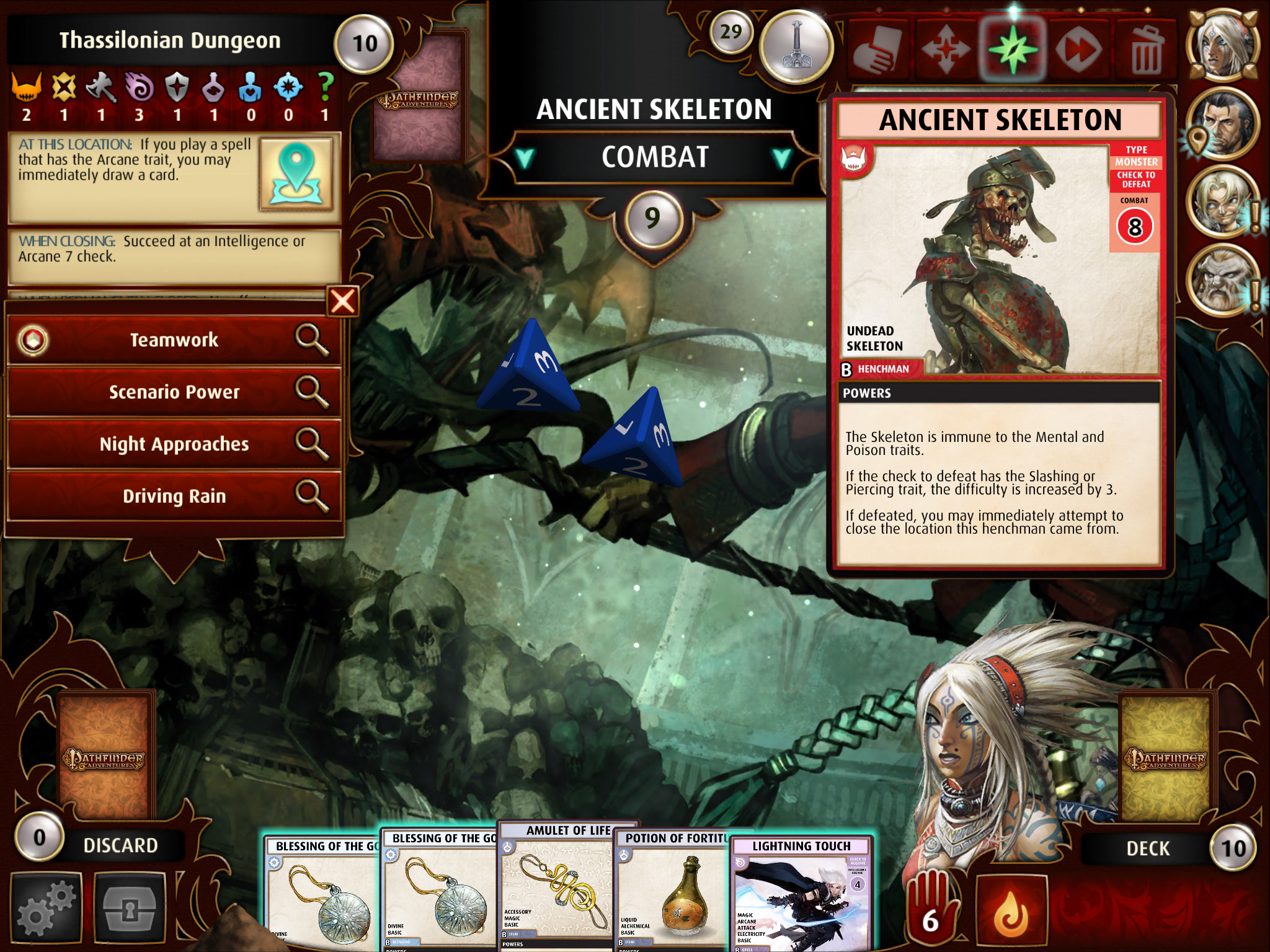 There are various actions you can take when it comes to playing a card, and each gives specific bonuses. You can Reveal a card, which means you show it but it stays in your hand, you can Discard a card, which means the card goes into your discard pile, you can Recharge a card, which has you put the card at the bottom of your deck, Bury a card, which makes it unavailable until the end of the scenario, and Banish a card, where the card is permanently removed from play. These actions make for some very interesting decisions while playing because you have to weigh the need for whatever boost a card can give you with whether you can afford to discard it or even banish it; banishing an armor card can save your life, but you’ll never see that card again. These moments can be quite tense, and the dice gods are cruel enough to often ensure you lose that one card you didn’t want to lose.

Pathfinder Adventures uses a clever mechanic where your characters’ health points are equal to their deck size; every time you discard a card is like losing 1 HP. When your character runs out of cards, she dies. You can even play the game with permadeath, but seeing how often I managed to kill my characters, I would save that for when you know the game well. So, as you can see the game weaves cards into the theme quite well, and more often than not I found that the way the cards behaved in the game made sense within the context of my adventure and the characters’ skills. If my character is proficient with heavy armor for instance, she doesn’t have to banish an armor card to escape any damage but can simply bury it, which is preferable. 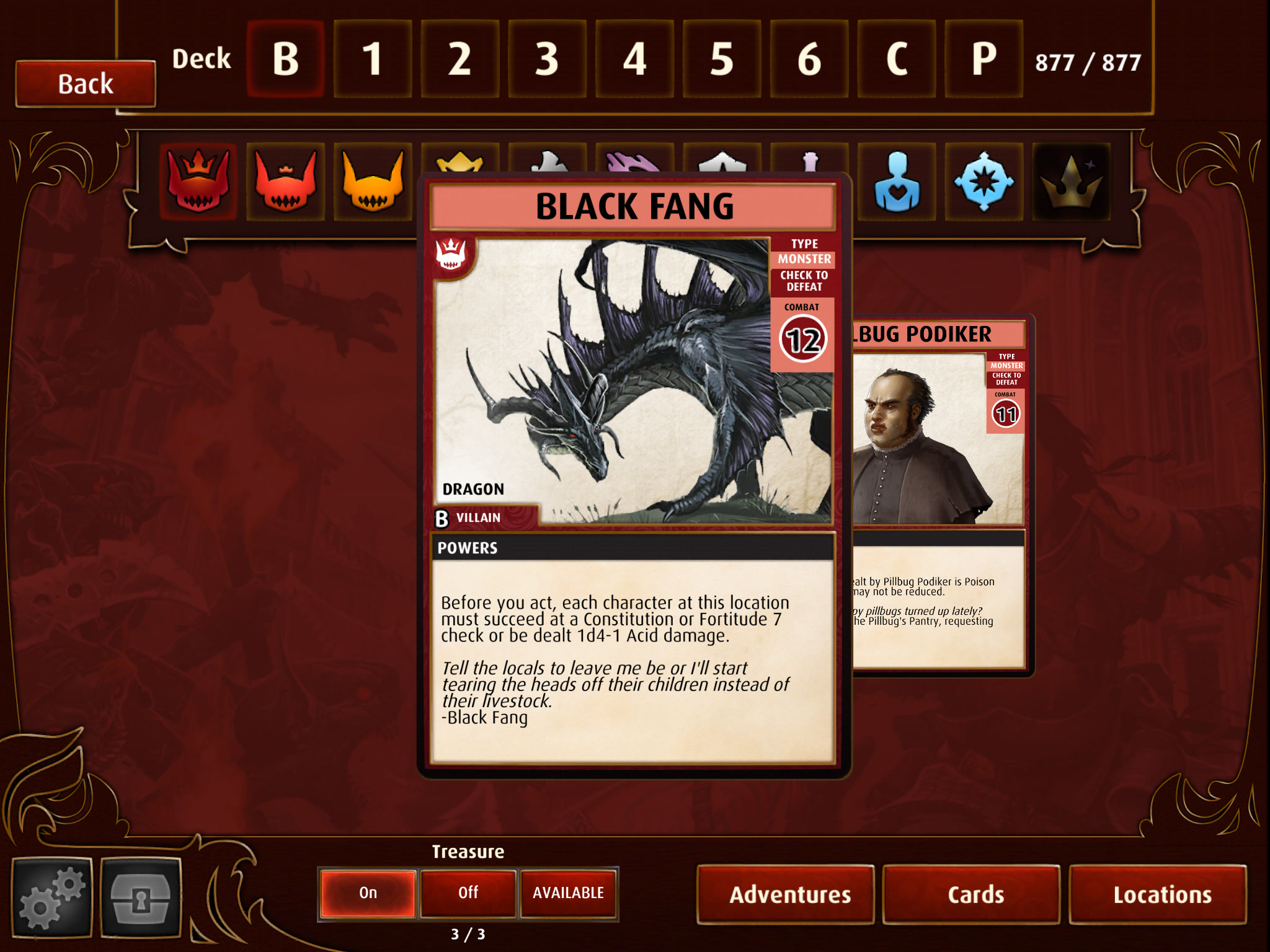 Now that you have an idea of how the mechanics work, let’s talk about the actual app. If you like classic fantasy art, you’re going to love the way Pathfinder Adventures looks. The cards are very well drawn, the menus mostly look like pretty paintings, and once you start an adventure, you’ll encounter nicely-drawn, animated locations that really help bring the game to life. This is one aspect where the digital definitely surpasses the physical since instead of having a card that simply states the location’s specific rules, in Pathfinder Adventures you have subtly-animated background art that really helps the game create a sense of place. The music also helps set the mood, adding a sense of adventure to what would otherwise be a dry card game.

The overall interface also works well, and it’s to Obsidian’s credit that it managed to squeeze so many actions and so much information on one iPad screen. I do wish there were a few more tooltips, especially when it comes to character skill icons, since that would have saved me a few unnecessary taps. Still, the game uses plenty of small ways to draw players’ attention to various on-screen information and also does a good job explaining all those indicators and all those icons in the tutorial. Daunting as the interface might look at first glance, it won’t be long at all before you know exactly what’s going on and exactly where to find every piece of information. And I appreciate the various animations when you acquire or banish cards because if they weren’t there, the game would look a bit too still and stilted for my taste. 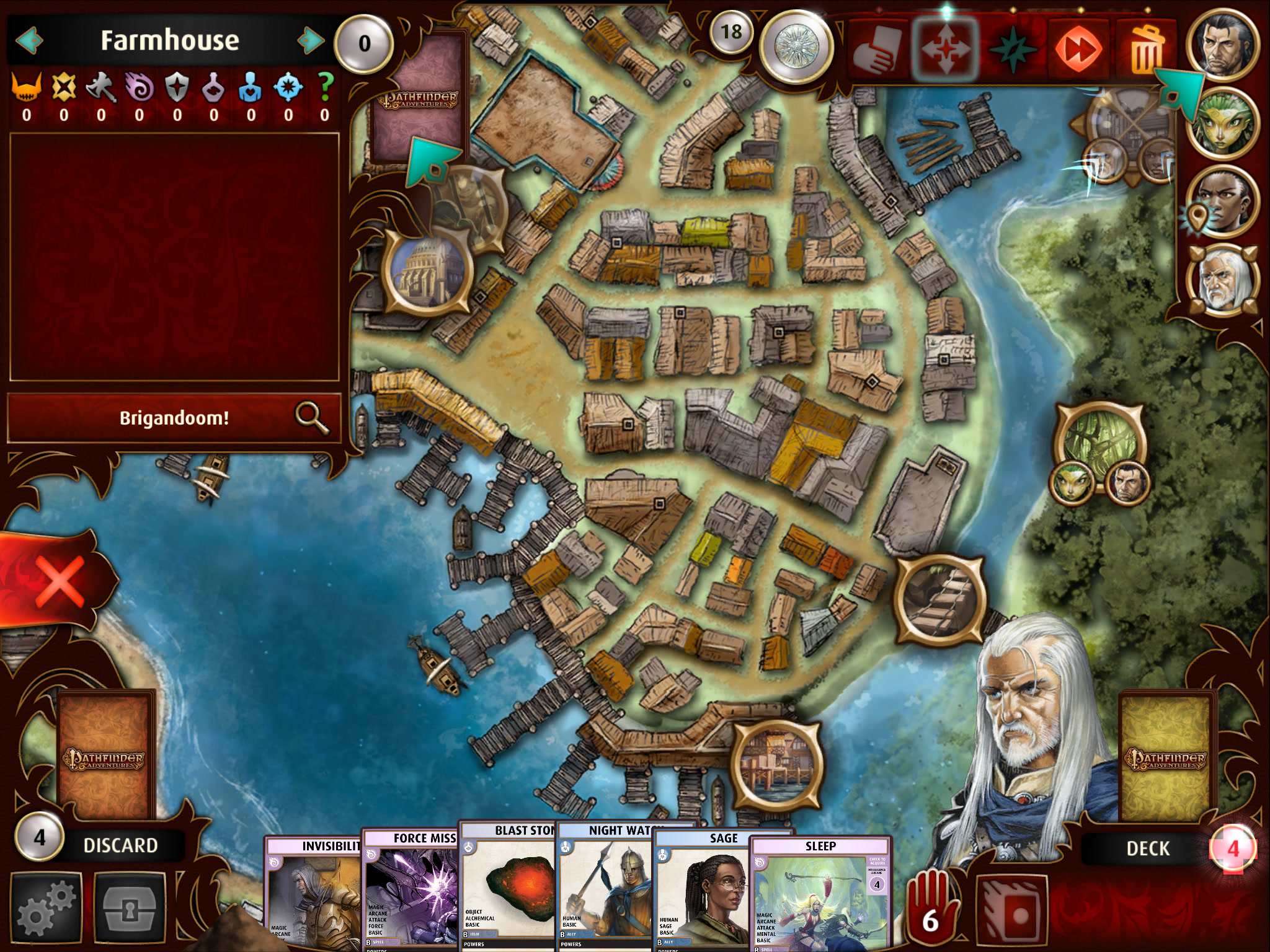 The art and the interface played a big part in me enjoying my time with the game. I enjoy card games anyway, but the way Obsidian brought the Pathfinder universe to life definitely helped me enjoy my characters’ adventures much more than if the developers had simply created a more “literal" translation of the physical to the digital. I feel that in a way, the digital version of the came comes closer to being a blend of the card game and the RPG of the same name than simply a digital version of the card game because of the way it brings the universe into play and allows it to complement the cards.

In terms of content, if you enjoy the game’s mechanics, you’ll be playing Pathfinder Adventures for a long, long time. The game comes with the a free Adventure and then two others you can purchase either with in-game gold (although that would take quite a bit of playing) or by buying them as DLC. Each adventure offers around 5 new scenarios, plenty of new locations, new maps, and dozens of new weapons, spells, monsters, and so on. There are also four more Adventures listed as “coming soon." Then add to the extra scenarios the extra characters you can purchase to add to the two that come with the game – each with his or her own class, skills, and cards – and you can see how much content the game offers. And, in what is a great addition, Pathfinder Adventures has a Quest Mode which creates random Adventures using the many cards in the game. The generated Quests number in the thousands and add an immense amount of value to the game.

What will truly make the game even better than it is is the upcoming online multiplayer mode. The game already comes with pass-and-play MP, but having the ability to go adventuring with online players will help Pathfinder Adventures feel more like an RPG and should make it shine even more. I’m really looking forward to the online MP and i hope it’s done well – though from what I’ve seen so far, I have confidence in Obsidian pulling it off just fine.

The game is free-to-play, and you don’t have to pay a penny if you’re satisfied playing the same adventure over and over again. But, to be honest, if you like this game even a bit, go ahead and buy the Rise of the Runelords Bundle; it might cost $24.99, but it gives you all the adventure decks as they are released, all the heroes, character add on deck, and promo cards. While the price might seem high for the App Store, the amount of content you get, and will continue getting, for that price is crazy. And if nothing else, this is a premium game through and through and in my opinion, the developers should be rewarded for the job they did bringing this complex game to iOS in such a great form. So, Pathfinder Adventures is an excellent digital card game that will offer many hours of entertainment and equally many hours of cursing your luck as your three 12-sided dice add to a total of 4.