Many years ago, I encountered a really cool boss in a game called Mega Man X. As one of the last encounters leading up to the final fight, players were locked in a room with a giant robotic spider, with multiple metal “webs" hanging from the ceiling. Every few seconds the webs would change, and create new pathways for the spider to travel. The rules were simple — it had to follow the journey of least resistance, and turn down every path it could. It was interesting because players could deduce where the spider would fall with any given pattern, but they had to be fast enough to figure it out before he landed on you. That concept is basically how the entire game of Amidakuji Knight ($0.99) works, to great success. 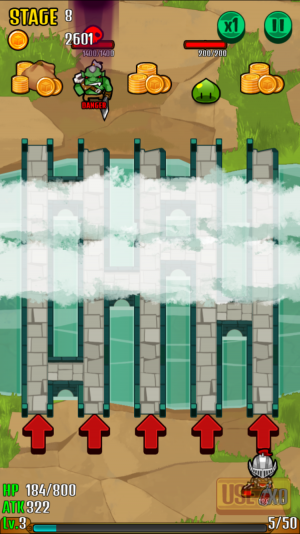 The concept not only translates perfectly to a touchscreen, but the developers also extend it a bit with a full-on level-up and gear system. After a quick setup that involves a heroic knight and his quest to locate a valuable talisman across three chapters, players are off to the overworld, where they’re presented with a number of choices, represented with paths. Each board has five in all, which will lead you to an end goal — whether it’s an enemy to fight and gain experience from, gold, or an item.

It’s simple, yes, but the choices can make or break a run. For example, do you go for gold to increase your stats in-between sessions, or do you attack enemies and risk an HP loss for a level-up that only lasts in that particular round? Or, alternatively, do you avoid enemies altogether that run, resulting in a low overall statline and rely just on your wits and skill to dodge them?

There is a little bit of randomness, as each level-up provides three random upgrades that you can choose between (with random values to boot), but it’s interesting how many possibilities there are especially as the game progresses, as I was constantly making decisions within seconds of one another. There’s even nuances like critical hits and first strikes to account for, both of which can be increased with the XP system. It’s really fun trying out new character builds in-between runs to see which one works the best.

That said, you have to make those decisions very quickly, as most of the boards obscure your view in some way. At first the path is always clear, so with enough perspective it’s easy to see what the prime path is, but after several rounds mist will appear at an increasingly alarming rate. Initially you still have a few seconds to figure things out, then paths start to become more complex and the mist comes into play almost instantly. 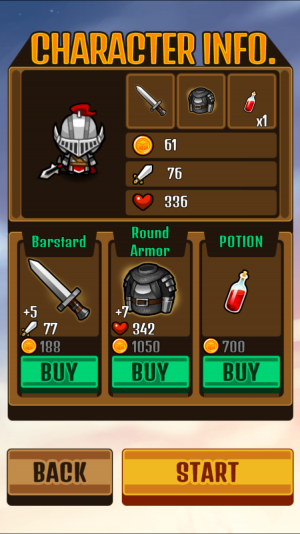 Beyond figuring out the right path, part of the game is learning its intricacies while you play. Items don’t necessarily say what they are exactly, but you might be able to divine that since your experience bar  is blue, a blue potion will grant you an XP boost. I like how the developers don’t give everything away with extended tutorial sessions, and especially in the second and third chapters, it’s up to the player to decide what to do. Naturally this leads to some trial and error situations, but with how easy it is to start another session it’s not gamebreaking.

So what’s on the table when it comes to IAP? Gold, basically. If you’re so inclined you can outright spend money to earn gold that can be used to upgrade your weapon, armor, and potion count, but it’s not necessary. Nearly every board can be handled with swift reflexes, as just about every mid to late-game level has at least one path that features gold or an item, and most of the early ones have them in abundance. If you’re fast enough to figure out patterns yourself you won’t be fighting that many bruisers on your path to victory. Considering the app is $0.99 the microtransactions grind my gears a tad, but I never felt compelled to buy them.

Outside of a stark difficulty increase in the latter part of Chapter 2, Amidakuji Knight is a game I can’t put down. It’s easy to play either with your full concentration or while something is playing in the background, and my reaction time has improved because of it.