In an era where kids can fire up a game like Real Racing 3 (Free) for free on a mobile device, I can’t imagine slot car racing sets are as ubiquitous as they were when I was a kid. Just about everyone seemed to own one back then, whether they were interested in cars or not. They’re pretty simple toys, with the only real input being how fast the car is going at any given time, but there was a certain thrill in seeing how fast you could take corners without careening wildly off the little plastic tracks. There was a bit of technique to it, though the advantage certainly went to the player who was most familiar with the track. Black Hole Joyrider (Free), the latest from Boson X ($2.99) creator Ian MacLarty, might look and sound like a grand space adventure, but it’s basically a gorgeous game of slot car solitaire.

In Black Hole Joyrider, you find yourself traveling in space through a black hole’s gravity well at an ever-increasing speed. Your craft will do its best to stay inside of the well, but the path twists and curves. If you’re going too fast as you head into a curve, you’ll fly out of the well and take damage continuously until you can get back inside. Luckily, you have retro thrusters you can use to slow yourself down. Unluckily, your fuel supply for those thrusters is extremely limited. You’ll get refills at regular intervals, but if you use your thrusters too often, you won’t survive long enough to reach those checkpoints. The goal is simply to last as long as you can. Your best score will be saved, and you can compete with other players on the Game Center leaderboard. 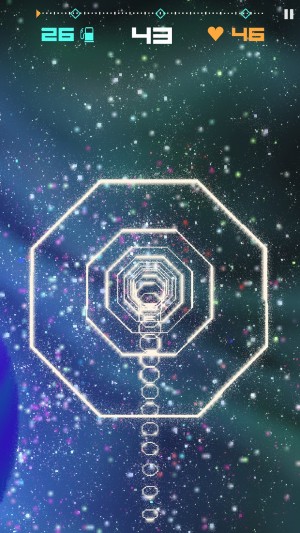 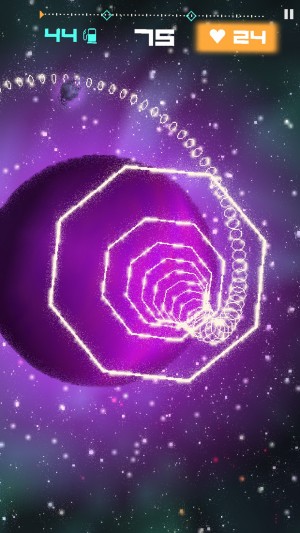 As with slot car racers, all you can do is try to set your speed. Tapping the screen will engage your retro thrusters, and the longer you hold it, the more you’ll slow down. Otherwise, you’ll just keep on speeding up. Your ship will steer itself automatically, and it does a good job of it on straightaways. It’s around the corners where you’ll want to intervene with a few choice taps or holds. You can survive a little while outside of the well, and that’s something that you can use to your advantage if the track layout works in your favor. This gives you a slight margin of error, so it’s a less punishing game in some ways compared to similar titles. It’s still pretty difficult, though, and I expect most players’ runs will only last a few minutes at best.

The strategy of the game comes from knowing when to activate your thrusters and for how long. Since the track is randomized each time you play, it’s a little different from the usual slot car sets. It’s less about memorizing the optimal speed sequence for the track and more about learning what to do in each kind of track section you’ll come across. You can see fairly far ahead of you, so you have a brief bit of time to decide what you want to do. It’s an easy game to pick up and learn how to play, and the challenge is there. At the same time, the mechanics seem to be missing a certain something. Similar to slot car racing, there’s only so much you can get out simply controlling acceleration. Black Hole Joyrider‘s mechanics are fun in short bursts, but a bit too shallow to enjoy in longer sessions. 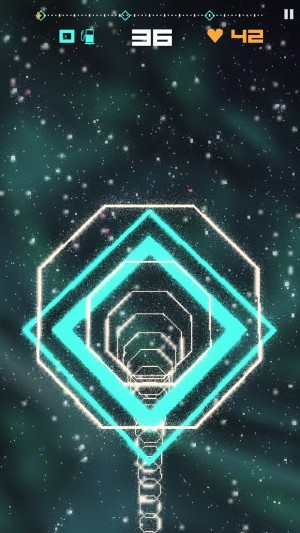 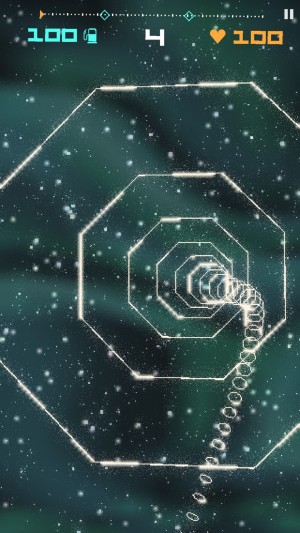 Lifting the game up a bit is its wonderful presentation. Space looks amazing here, and I found myself frequently getting killed because I got distracted looking at nebulae and star patterns. As trite as it is to say this, you really have to see it in motion, as still shots don’t do it proper justice. The music selection is absolutely wonderful, too. Classical orchestral arrangements and wandering through space go together well. It really does feel like you’re on a space joyride, at least as long as you stay on the path. If you fall out of the well, the game does everything it can to tell you that’s not a good thing. Your display turns red, an alarm sounds, and you generally feel like the whole thing is coming to pieces. The UI is simple and easy to read at a glance, and when you fail, a mere tap will send you on your next voyage.

Black Hole Joyrider has no IAP whatsoever, and like Boson X, there are no collectibles, coins, or anything like that. It’s just you against the game. It’s a lighter experience all around than that game, but it’s enjoyable enough to play and the presentation certainly doesn’t slouch on its end of things. I don’t know if I’ll be keeping it in my regular rotation as long as I did with Boson X, but I’ll gladly take it out for a cosmic joyride here and there. Which, come to think of it, is more or less what my friends and I used to do with our slot car sets.