I’ve always found the written word very alluring, which to a great degree explains my career choices and the fact that I’m writing this review right now. Books, and later adventure games and interactive fiction, were my gateways to all kinds of fantastic worlds, and I often judged those books on how well they managed to create a sense of place, how “real" those fake worlds felt to me. So, going in to play Fallen London (Free) (first its browser version and now its iOS version), I was intrigued by the description of the world I was about to inhabit— a “hilarious Victorian-Gothic underworld" version of London—and wondered how big that world would be and how vivid. Well, I soon realized that Fallen London’s sense of place is among the best in any game I’ve played, textual or not, creating the strong impression that the world around me kept on living and breathing even in my absence, a key feature for any sense of realism when encountering absurd, fantastic worlds. 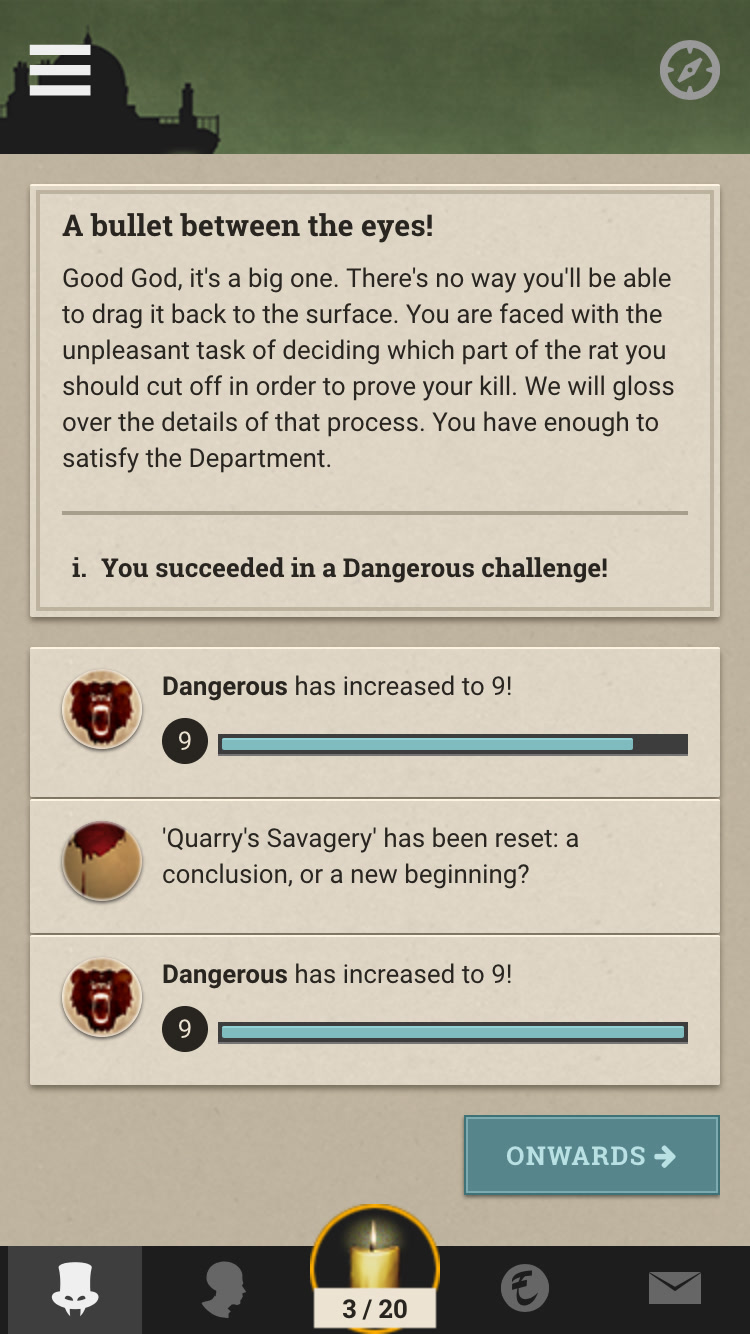 So, despite a few, but serious, issues with the iOS version of the game—ranging from very slow load times to occasional syncing issues—Fallen London offers an intriguing world to explore and encourages you to get lost in a labyrinth of stories, constantly meandering from one absurd story to another and leaving you with a constant sense of wonder and amazement at the clever absurdity of it all. This game really feels like an open world literary RPG where you’ll shape your character through your decisions, and it offers a story and an experience like few other games on the App Store.

First, a few words about Fallen London’s genealogy. Fallen London (originally titled Echo Bazaar) started off as a browser-based game in 2009 and won a few accolades for its gameplay and—primarily—its stories. I played the game a bit on my browser back in the day, but while the stories were definitely entertaining, the UI wasn’t the best, and its F2P system (which I’ll talk about later) didn’t really work well on the PC. That’s why when I heard the game would be coming over to mobile, I was immediately excited because I knew the pick-up-and-play nature of an iPhone game would suit Fallen London perfectly.

The way you explore Fallen London and its gothic world is by playing through various storylets, short strands of stories that you explore step by step. In turn, these stories open up other stories that lead to other stories, and so on, and so on. Keep in mind, though, that the stories don’t follow a linear progression but, rather, go in all sorts of crazy directions. The stories vary greatly and all offer different ways you can go about completing them. The ability to successfully pick one of those options often depends on your various Qualities—watchful, dangerous, shadowy, austere, etc—which I’ll talk about later in this review. So, for instance when I decide how to go about getting rid of an annoying character—persuading him to go away, beating him up, bribing him, and so on—my success or failure depends on my qualities: having a Dangerous of over 20 might give you a 70% of beating him up while having 25 might give you a 100% chance. So, I take your chances and see what comes out. 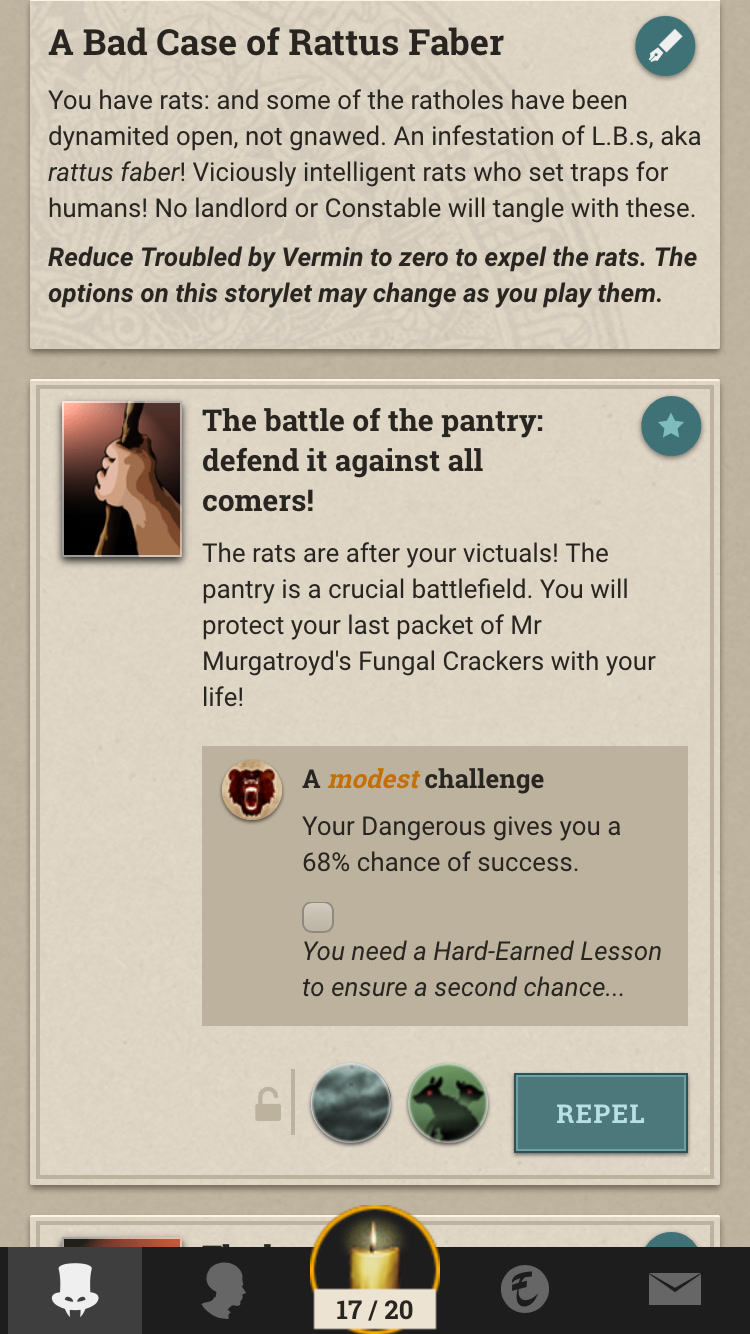 My various qualities and the way they affect my chances of success work very well in terms of pushing the narrative forward and gently forcing the player to vary her approach. The more I attempt tasks related to specific qualities, the more those qualities increase, and when I succeed in more difficult tasks (represented by a lower percentage of success), the more my qualities increase. In that way, the game encourages you to avoid always traveling the world of Fallen London along the path dictated by your strongest qualities and to try out choices with smaller percentages of success and, therefore, choices based on different qualities. This mechanic is standard fare in many RPGs, but it’s not often found in text-based games.

What I particularly like about the way Fallen London’s stories work is the way they make the game feel more like an open world adventure rather than a game with one main storyline and short, branching substories. Instead of feeling like I’m just following the same main quest as every other player, when I play Fallen London, I feel I’m exploring a labyrinth of stories often completely unrelated to each other. I didn’t feel like I’m in a world built around me and my actions but more like a visitor to a living, breathing world; that’s what makes the game shine and make its world feel “real." 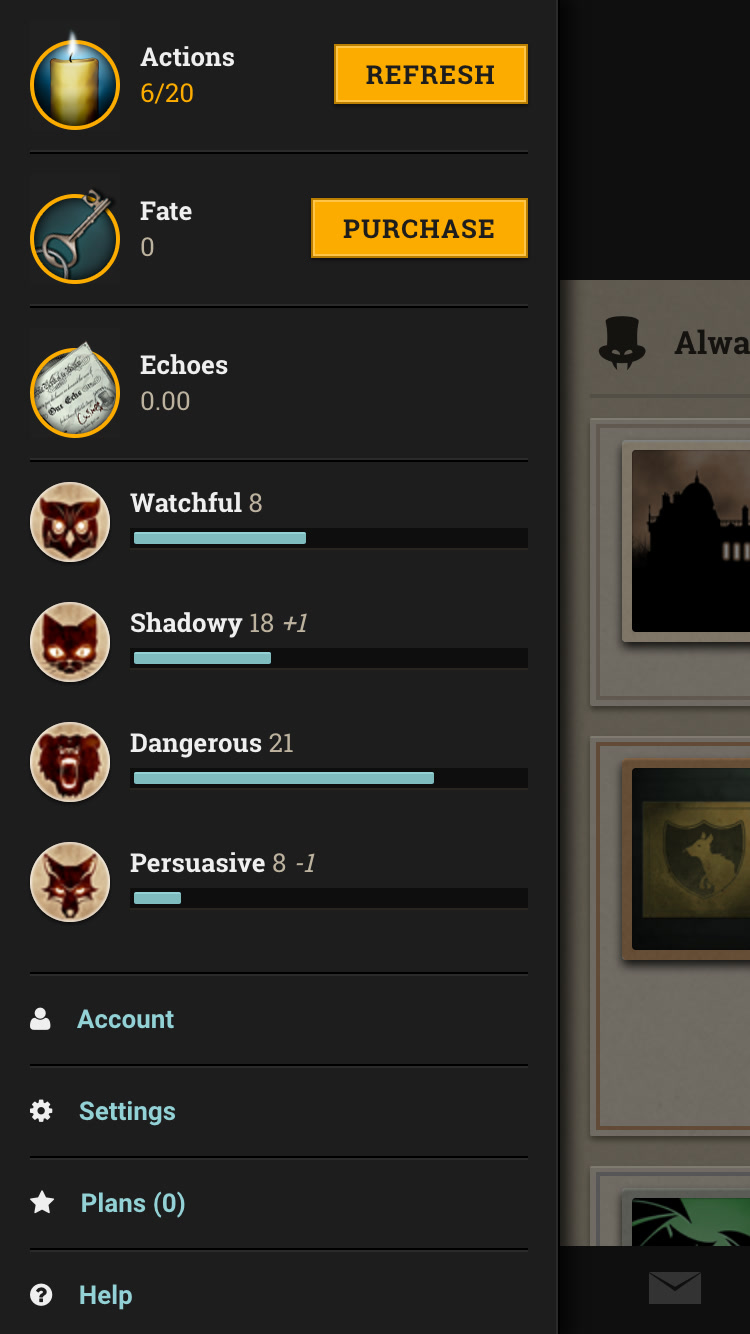 This sense of place is helped by the ability to pick my lodgings (which both boosts my qualities and act as a gateway to new stories), to visit a great variety of shops (from where I can buy clothes, weapons, tools, etc), to make various friends, allies, and enemies, to develop nightmares, and so much more. All of these help the world feel alive even without my own presence and helped create the illusion that I had limitless ways to forge my own path through the world of Fallen London.

The sense of a living, breathing world is helped by the great amount of content in the game—reportedly over a million words. There are the numerous story strands that grow organically out of my actions in the world of Fallen London, and there’s also an Opportunity Deck, my personal gateway to additional stories. These can be part of a continuing story, offer seasonal content, or offer location-specific content. All these cards allow the developers to sprinkle more stories and more opportunities for players without having to mess with the larger storylines already present in the game.

In addition to its many, many stories, Fallen London has additional content that I could access for the right price. Fallen London offers various premium storylines I could buy for Fate, and before shouting “Paywall" as loudly as you can, these stories are more along the lines of DLC since they aren’t necessary but, simply, offer extra content you can explore. There’s also the ability to sign up for a monthly subscription ($6.99 a month), which makes the player an “Exceptional Friend of the Bazaar." The subscription offera a substantial story per month, double the actions (up to 40 per time), more cards to draw in the opportunity deck, and access to the House of Chimes, which is an exclusive location with plenty of stories, people to meet, gaming tables, and more. 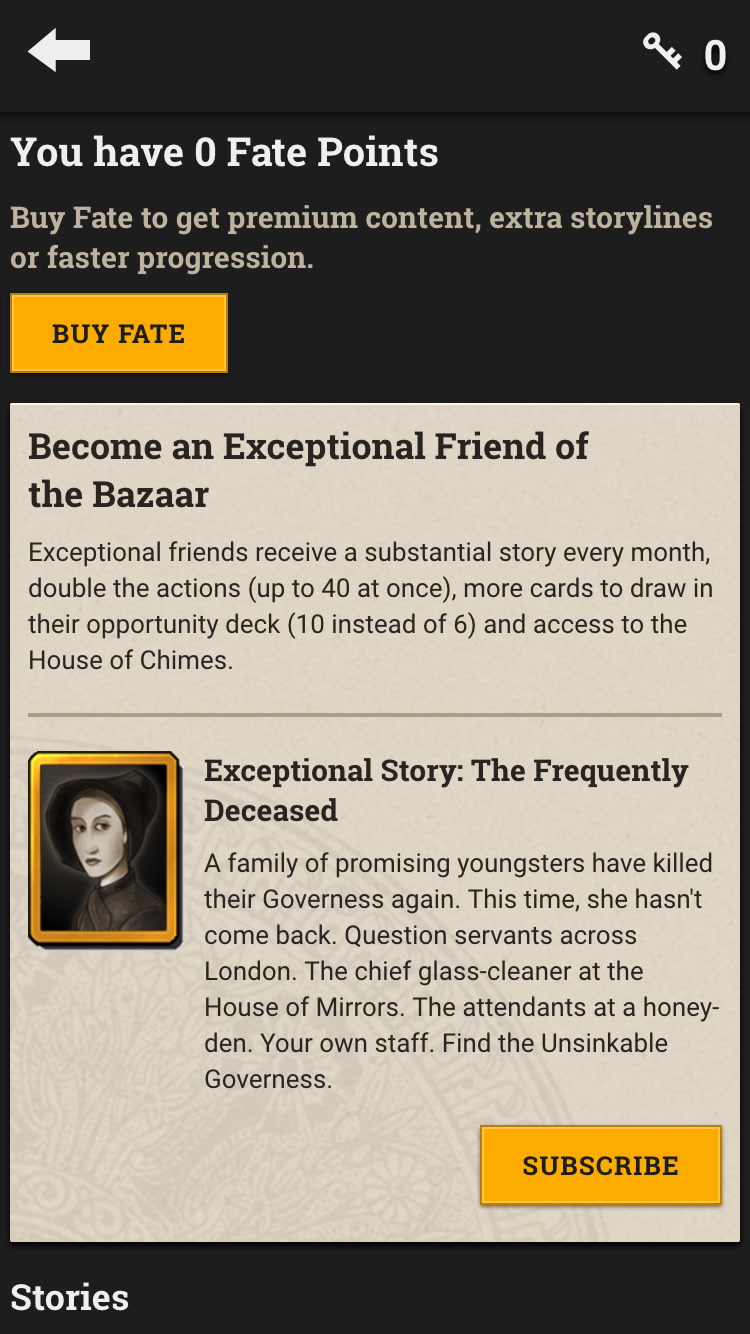 So, as you can tell, you can enjoy a huge chunk of the world of Fallen London without paying a dime, and if you do want to pay for additional entertainment, you can. Do keep in mind that there is an energy system that’s more along the lines of what most players think about when they see the term Free-to-Play: you can take 20 actions (40 if you are a subscriber) before having to wait for your actions to recharge. Personally, I’ve had no issues with this system since I like to drop into the game, explore it a bit, enjoy some crazy stories, and jump out. I don’t think the game would be as fun if you could play it straight through in one sitting, and the developers wouldn’t be able to pump out enough content to keep players interested.

What I, and many in our forums, did have issues with is the app itself, since it takes literally 2,3 minutes for the game to load, an eternity and a day in mobile terms. I often found myself just quitting and loading up another game about a minute in, which is a shame. I know the developers are working on fixing this issue (there’s a beta version of the game now that loads better), but I wish they had addressed this issue before the game released. There were also some issues with progress not syncing, but they’ve fixed that in a recent update by adding a manual sync button.

The good news is that outside the loading issue, the UI and everything about the app make the game play so much better than the browser version. The app really helps you get lost in the story without the annoyances of a badly designed UI breaking the spell. There’s even a great soundtrack —which the browser version lacked—and it’s fantastic, equal parts enticing and disturbing. I do think, though, that people who haven’t played the game before will have issues figuring out everything that Fallen London offers because there’s limited direction once inside the app. Fortunately, there’s a manual in-game; unfortunately, you’ll have to find it since the game doesn’t help you locate it. But once you get the hang of the app, the game flows very smoothly.

So, what to expect when you decide to play Fallen London? Well, a fantastic storytelling game with a brilliant —and lively world—wrapped up in an app that suffers from a few —fixable— issues. This is a game I find myself returning to daily, and I’m constantly amazed at how great the writing is, how imaginative the world is, and just the size of the whole thing; you can, and probably will, get lost in the labyrinth that is Fallen London. The feeling of encountering twist after twist, turn after turn, always wandering and wondering, is unmatched in storytelling games on the App Store. So by all means, go wander; I think you’ll enjoy it.