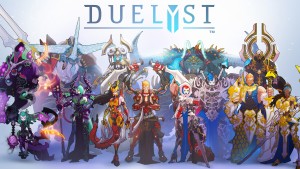 A few months back we wrote about the upcoming Duelyst going into beta, and I talked about how I was looking forward to getting this game on my mobile. Well, that day is closer since Duelyst has launched for PC and according to the developers, from here on they’ll be focusing on making the mobile version of Duelyst great and hope to launch at some point in 2016. If you haven’t heard of the game or don’t know much about it, Duelyst is a fast-paced collectible card game with a tactical battlefield, and it looks great. The game currently over 330 cards across 6 unique Factions and offers ranked season ladder and draft mode tournaments. And the matches last between 5-10 minutes, making it great for mobile.

The game has some big names behind it; its lead artists have worked on games like Overwatch, WoW, and Rogue Legacy, and the team also includes board game designer Eric Lang, who’s worked on games like XCOM, Blood Rage, Game of Thrones, and more. I’ve been really looking forward to Duelyst coming to my mobile devices, so I hope we won’t have to wait long before getting to play it.