My quest to stay more or less on top of major gamebook releases has been pretty tricky of late thanks to the speed at which new ChoiceScript-based games have released both through Choice Of Games and Hosted Games. It’s hardly the worst problem to have, but readers who have stayed on top of my recent gamebook reviews know that none of them have really grabbed me recently. Coming off of the massive, disappointing Magikiras (Free), I was a little wary of Guns Of Infinity ($4.99). It’s by a completely different author, mind you, so there wasn’t much of a logical basis for that fear, but the relatively large word count certainly had me cautious. An unpleasant read can result in very different levels of agony depending on its length, and if Guns Of Infinity missed the mark, it was going to be a very long haul.

Much to my delight, Guns Of Infinity is rather great. Oh, it’s certainly a long story compared to many other gamebooks, but it’s a riveting one. Written by Paul Wang, the author behind Mecha Ace ($4.99), The Hero Of Kendrickstone ($4.99), and this book’s immediate predecessor Sabres Of Infinity ($2.99), Guns Of Infinity puts you in the shoes of the same character you played in Sabres as he fights for his country’s freedom against the oppressive nation of Antari. Some time has passed since the calamitous Battle Of Blogia, where the Tierran Army held their ground against the Antari at a heavy cost. With dwindled numbers and very little territory to their names, the Tierrans are hanging by a thread at the start of Guns Of Infinity. Your character, a member of the elite Royal Dragoons who managed to survive the bloodbath, has been promoted to a captain’s position and now finds himself having to lead a group of poorly-trained draftees as part of the Tierran Army’s efforts to fight themselves out of the corner they’ve been painted into. 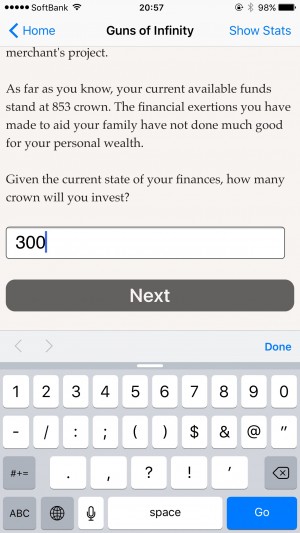 The campaign starts off as a desperate Hail Mary plan to siege a fortress, which eventually leads to a reasonable, if gutsy, plan to turn the tide completely. How the overall effort goes is largely out of the player’s hands, instead giving you control over some of the finer details of the outcome, like the extent of the casualties, which officers live or die, and of course, the ultimate fate of your main character. It feels like a believable portrayal of the power that a character of your rank would possess. In war, it’s pretty unlikely a single captain would swing the overall results on their own, after all. Guns Of Infinity acknowledges that, so it’s less about how you and your unit affect the war than how the war affects you and what you choose to make of it all.

Will you use this opportunity to further your own standing at the potential cost of many others? Are you concerned with the honor of your country, taking care of those most important to you, or simply staying out of trouble as much as possible? Do you follow orders blindly, or do you feel like there’s something rotten in your society? These are questions you’ll have to grapple with, and doing the right thing from a philosophical standpoint can have deadly consequences during the dangerous situations you find yourself in. Gun Of Infinity does a sublime job of planting seeds of doubt in the cracks of the thick coat of righteousness you would expect to find in such a critical military operation. Whether you choose to follow up on those seeds is up to you, of course. If you just want to get swept up in the glory of battle, you need not even notice those mild objections. Either way, a rich story full of thrilling battles, interesting characters, and tough command decisions awaits you. 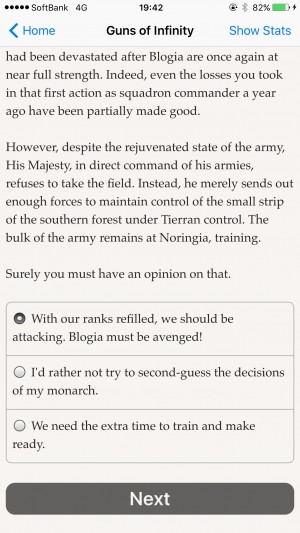 While a few of the characters are a bit thin in terms of development, there are some surprisingly well-written, complex ones in Guns Of Infinity, too. Caius d’al Cazarosta, the bastard son of a noblewoman and a commoner, is a particular standout. He battles fiercely for a country that will never fully accept him, and is both intensely pious and a vicious warrior. He is one of the other survivors of the Battle Of Blogia, and his skill has already taken him farther than someone of his circumstances should have been able to reach. He’s fully aware of his social limits and seems to accept them, but he also shows flashes of ambition to break through the ceiling that’s been imposed on him. There’s a great twist near the end of the story that he’s a big part of, and it seems as though he’ll likely be an important part of the third and final story in this series whenever it arrives. I could go on about the three or four other characters who made strong impressions on me, but I’ll let you discover them for yourself.

The same quality of writing that brings the characters to live also does a capable job of describing the many battles in the story, some of which can get very complex thanks to the large number of players on the field. You’ll take part in everything from small skirmishes to massive battles with multiple units under your command, and while it’s generally best to play to your character’s strengths, what works well in one situation might not be the best choice in another, even if it’s what you’re most skilled at. And of course, just as in the real world, preparation is almost as important as execution. Your management of your unit has a real effect on how well they handle themselves in battle, but you’re constantly having to balance raw training against morale-boosters, appeasing your commanders, and trying to make something of your personal life. You can’t possibly do everything, so it’s up to you to prioritize. 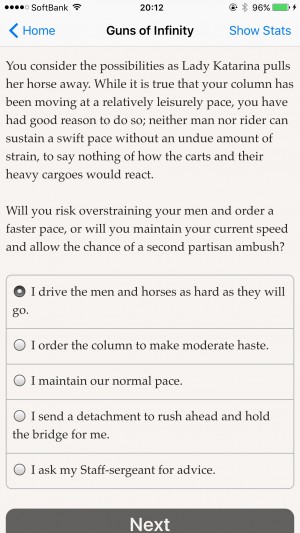 You don’t have quite as many options with your character set-up as you might be used to from other ChoiceScript games. The culture of the Tierrans is such that only males of noble birth could possibly be in the position your character holds, though the story does give you some opportunities to act against that. You can at least decide your sexual orientation, but depending on how you play, romance may very well be a minor factor. I appreciate that the author doesn’t try to shoehorn in a lot of romance if you’re on one of the many branches where it really doesn’t fit in. If you choose to go after romance, you’ll have to neglect a lot of other very important matters, and it will cost you and your soldiers dearly. That said, if you go that route, you’ll find the relationships are reasonably well-written. It’s worth heading down that road on at least one playthrough.

While I’m piling on the praise, I want to call attention to the overall excellent plotting work in Guns Of Infinity. The pace of the story is just right, and for the most part every scenario feels important to the overall plot and satisfactorily fleshed-out. The author deftly handles alternating between high-stakes situations and more low-key ones, and each significant battle ramps up the intensity nicely from the previous one. The climactic battle is fantastic, a worthy ending to such a long struggle, and the denouement is given all the breathing room it needs to wind things down in a pleasing way that both demonstrates the outcomes of your decisions and sets a few pieces in place for the next story. I should also mention that you need not have played Sabres Of Infinity before jumping into this one. Guns Of Infinity includes a nice recap of its events, and you can even run through the major decisions to set up your character if you aren’t carrying one forward.

Simply put, Guns Of Infinity has almost all of the best qualities you would look for in a gamebook. The quality of its writing is excellent (albeit with a few typos here and there), the unit management provides a satisfying gameplay kick, the plot is impressively ambitious in its size and scope, and the pacing is just right. It’s an excellent mix of many of the things that gamebooks do well, with each element used in satisfying quantities to produce a wonderful whole. If you have any love for this kind of game, make sure to pick this one up, and if you don’t have it, grab Sabres Of Infinity as well. I had a fantastic time with this one, and I suspect you will, as well.