Do you like Advance Wars? The 2001 Game Boy Advance turn-based strategy game holds a special place in a lot of folks’ hearts because it was an interesting and accessible game, being the first strategy game that many people played, myself included. Many turn-based strategy games to this day owe a signifcant debt to Advance Wars. Warbits ($4.99) falls well in that category, but it’s probably more accurate to say that it’s trying to be Advance Wars. It lacks originality, but it doesn’t screw anything up on the way, and it’s Advance Wars on your phone with online play. I’m not hearing any objections. 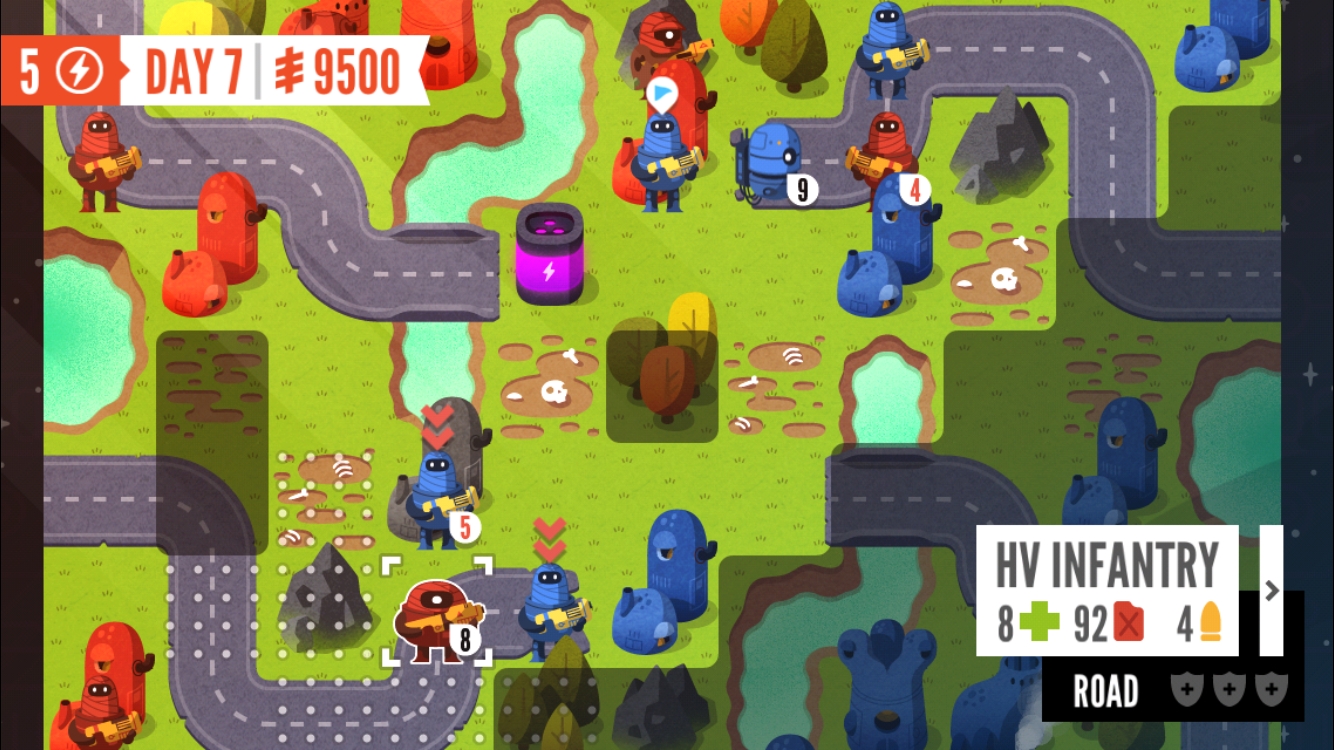 Warbits seriously copies the feel and structure of Advance Wars to a T. You fight on square-grid battlefields, moving all of your units in one turn before other players go. You can capture buildings, use factories to build new units, win by annhilation or conquering the enemy base. Even if you haven’t touched Advance Wars in eons, you’ll be familiar with this. It might be a tougher pickup if you’re new, but I assure you, stick with it for a while. The early missions do a good job at easing you into the peril yet to come. But what makes Warbits so much fun is that it strikes that balance between being accessible while having enough depth to keep you satisfied. The number of units and their rules is manageable to keep track of. You still have to learn how they all work, and it’s possible to slip up, but the game doesn’t throw too much at you. It’s that emergent complexity that Warbits excels at, as you feel like you’re in command when you need to be. Just give it some time, and you’ll be a decent strategist. Thankfully, the interface does a great job too at showing you what your units are capable of, along with your enemies.

The Warbits multiplayer features are top-notch. There’s the asynchronous multiplayer, which lets you play in up-to-4-player matches against friends or random opponents. But there’s also the clever tag match system. You put in a hashtag, and you can compete and participate in league matches against people also in that tag. It’s a really cool system that makes it easy to form up leagues and whatnot. And of course people are throwing down in the #toucharcade tag, because y’all are good folks. 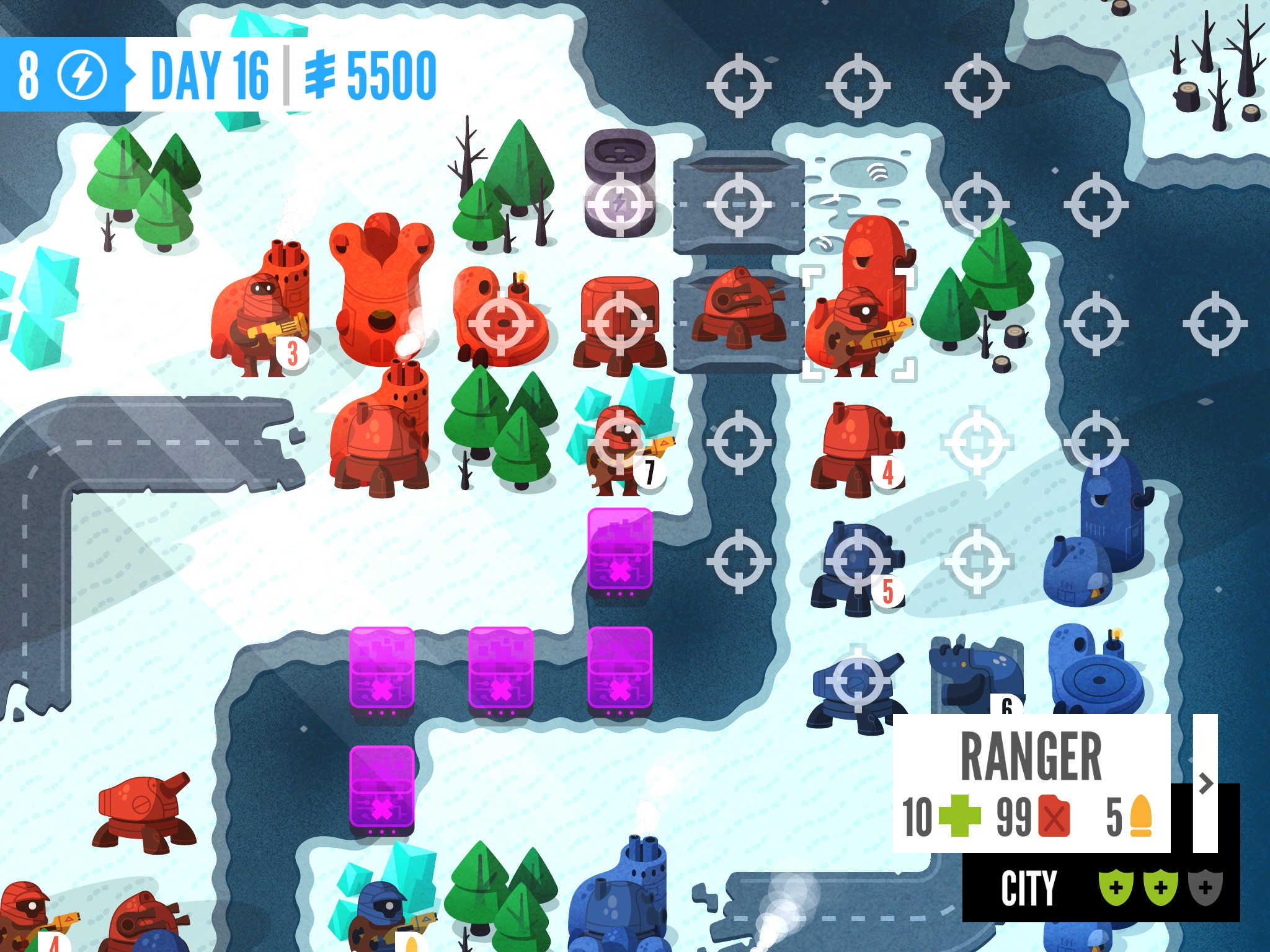 Unfortunately, Warbits is another victim of the dreaded Game Center issues around the time of its release. The bulk of the game is centrered around its multiplayer modes, but those rely on Game Center. So, if your Game Center is broken, well, at least half of the game is cut off to you! This is less the fault of Risky Lab and more a shame on Apple for having allowed Game Center to get so decrepit. And maybe on the mobile gaming media for having not raised a bigger stink about it, myself included. Because a killer feature in a game that Apple deemed their Editor’s Choice is broken for many dedicated players. You know, the kind of people that would buy a game like this? Thankfully, iOS 9.3.2 might just be our savior for Game Center issues.

The solo campaign itself is fun, spending the first chunk of the game getting you acclimated to the missions before dropping you into a world of hurt in its 20 total missions. The campaign quickly ramps up into something rather challenging, or maybe I’m an idiot. Still, while I don’t think you’d get the same lengthy campaign one of the Advance Wars games has, you also only pay a few bucks for this, so consider what you’re getting here. It’s a fun diversion for when you have to wait for new turns, or are out of data range, or if your Game Center doesn’t work at all. The writing is pretty funny, too. 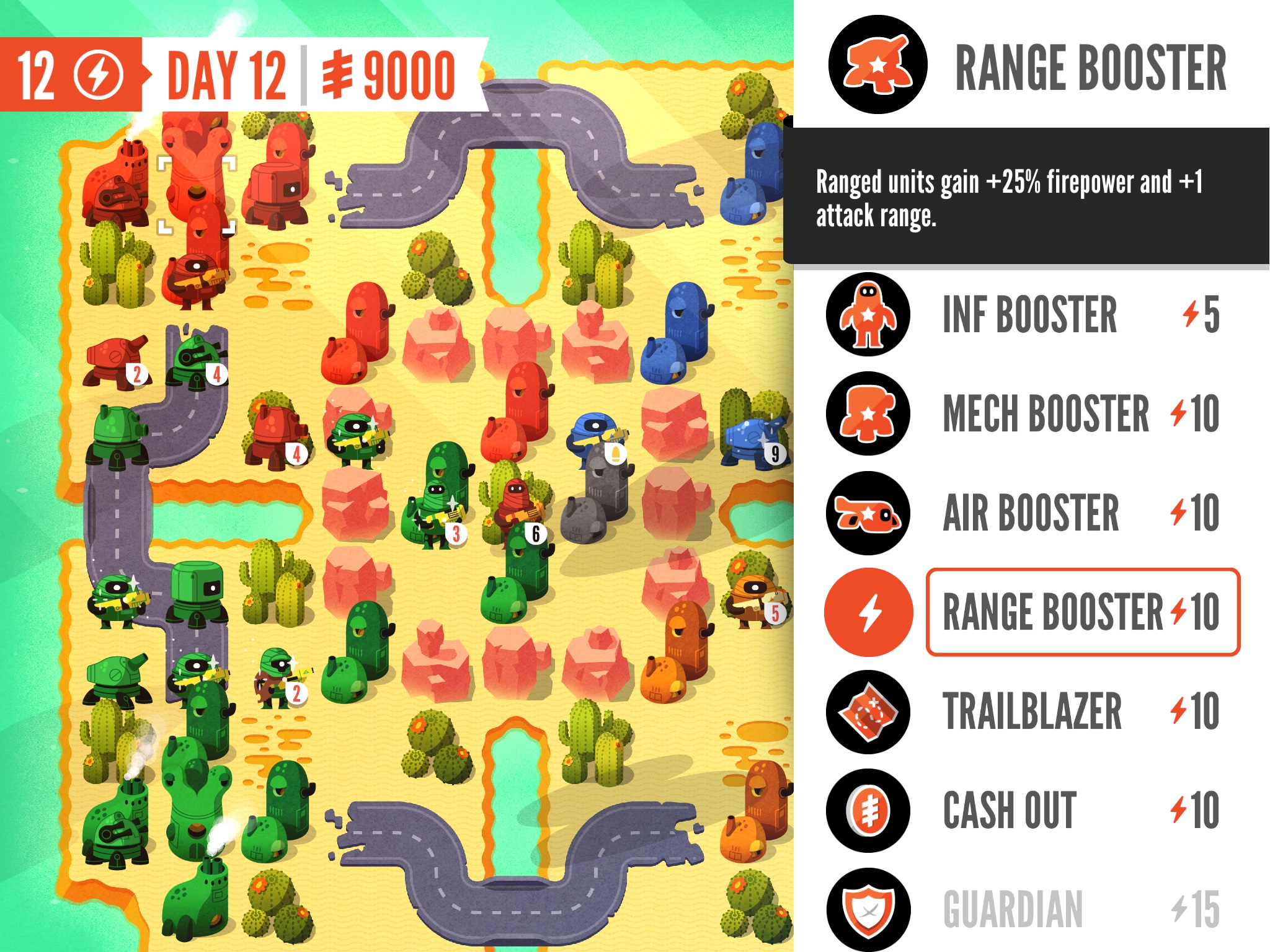 The thing that’s kind of disappointing about Warbits is that you have this game that’s so slick and well-constructed, and yet it feels like it’s aiming a bit low to make what is pretty much a shameless Advance Wars clone. Seriously, this is one of the slickest production jobs I’ve seen on a mobile game; everything from the animations to the menus and animations is an A-grade design effort. I’m consistently impressed by this game as a product. But yet, it shows very little actual originality in its actual gameplay, preferring to instead kowtow to skewing close to another game. Granted, “Advance Wars clone with turn-based multiplayer" is not the worst thing in the world. But I think back to when I was talking with forum moderator metalcasket about the game, and why I thought he should stick with it rather than just abandon the game for being too difficult. All the while, I kept referring to how accessible Advance Wars was back in the day, because it really as. It took a genre that seemed impenetrable and made it understadable and accessible for someone playing it for the first time. And as Warbits is basically that, I saw no reason to not discuss the two games as if they were different entities, because minus a few tweaks to things like the powers system, and the online features, what difference is there? They’re minimal at best.

I feel like Warbits could have taken some risks, tried to do some things that were more than just trying to ape Advance Wars. Risky Lab clearly has talent – the work they did on the art and interface is seriously just superb. I think Pixel Machines ($0.99) being a shameless Micro Machines clone is fine, perhaps because the game it’s copying is older and less-imitated. But I think there’s a bunch of Advance Wars-style strategy games, and none have the production values that Warbits has. And I don’t know, I would have loved to have seen the effort here go into something that I didn’t feel so familiar with. Yet, that’s not a bad thing: if you’re going to copy, copy from the best. And I can’t play Advance Wars with asynchronous online multiplayer on my phone (yet), so Warbits fills that void quite well. And a comment I saw that celebrated Warbits as an Advance Wars clone that they could play on their phone perhaps should cement that as long as you know to not expect anything too out of the ordinary, you’ll have a great time reliving a strategy classic in new paint.