Until now, publisher Dotemu’s work on iOS has been mostly limited to bringing back beloved classics in their original forms. Their releases have run the gamut from arcade shoot-em-ups like R.Type ($1.99) to point-and-click PC titles like Sanitarium ($3.99), to say nothing of the work they’ve done for other companies like SNK and Square Enix. Pang Adventures ($3.99) is something of an unusual case for the prolific French publisher, as it’s a new game based on an old favorite franchise. You might remember the series under the names Pang, Buster Bros., Pomping World, Magical Michael, or if you’re particularly well-informed, Cannon Ball. We’ll go with Pang for the purposes of this review.

The Pang series finds its origins at Hudson Soft, of all places, where it was known as Cannon Ball. It was an early release for the company, coming out in 1983 for home computers, and ended up being used as a sort of training exercise for new employees. Basically, if you wanted to work at Hudson, the first thing you had to do was recreate Cannon Ball from scratch. Commercially, the game didn’t make much of an impact, but its somewhat complicated physics made it a good test. Several years later, in 1989, Japanese developer Mitchell Corporation acquired a portion of the rights to the game and, in cooperation with Capcom, released a gorgeous arcade re-imagining called Pang. The game was a medium-sized hit in the arcades, and found a fairly big audience when it was released on home computers and consoles. A few sequels followed, including 1990’s Super Pang, 1995’s Pang 3, 2000’s Mighty! Pang, and 2010’s Pang: Magical Michael. All save the last began their lives in the arcades. 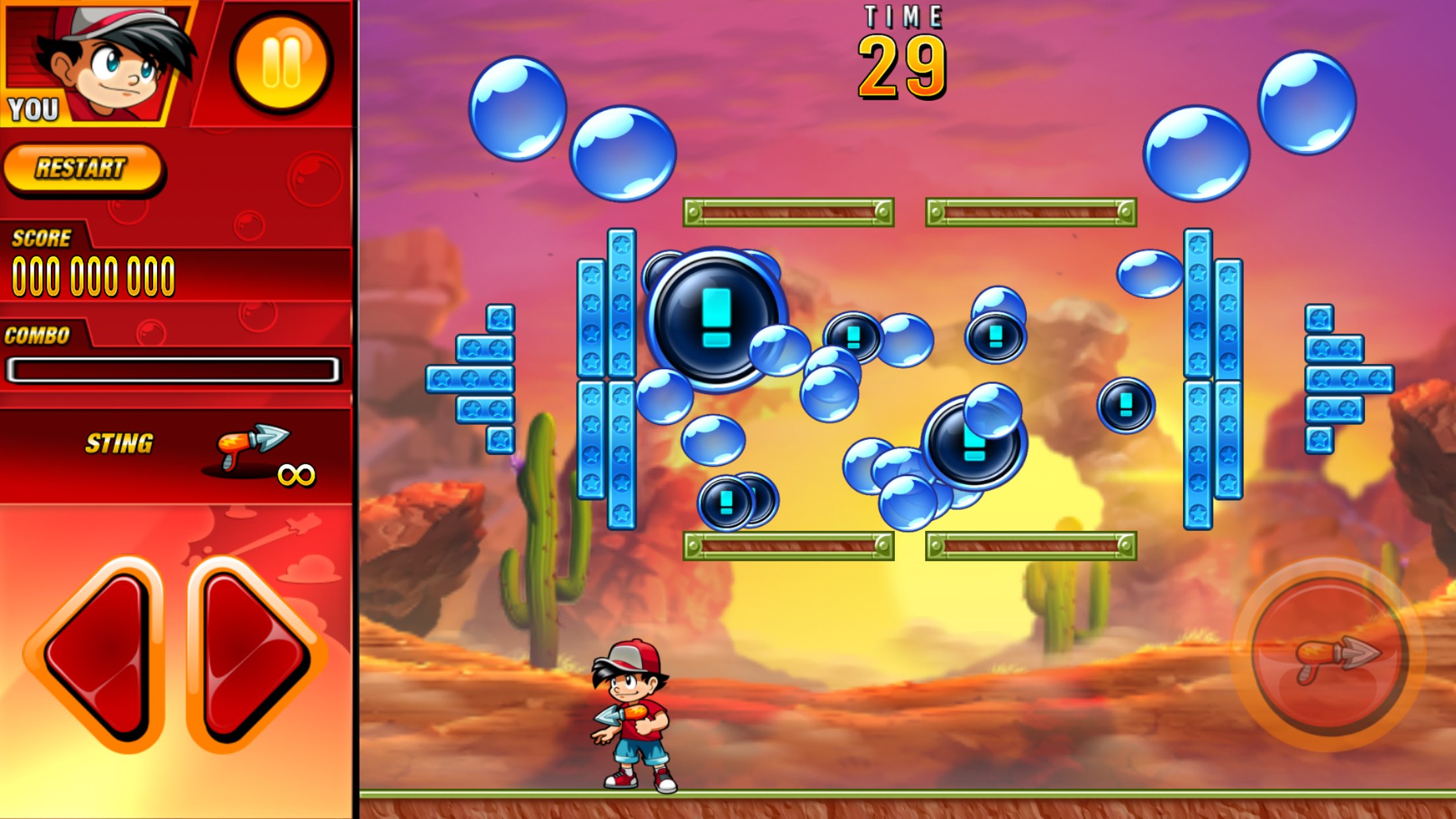 Most arcades are gone now, and for the most part, so is the Mitchell Corporation, so it was reasonable to expect we might never see another release in the Pang series. To be frank, it was a concept that realized most of its potential in the first couple of releases, so it was perhaps not the biggest loss. But there are a lot of people with happy memories of Pang, so it makes sense to bring it back. As for why we’re getting an original game rather than a re-release of a previous title, it could very well be a rights situation, but it honestly doesn’t matter all that much. Pang Adventures is more than worthy to carry the name of the franchise, and I think it’s probably the best Pang yet. Developer Pastagames, of Rayman: Jungle Run ($2.99) and Pix’n Love Rush ($0.99) fame, did an excellent job, so if you’re an old fan of the series, you can breathe a sigh of relief. You’ll find the same challenging, compelling, bubble-popping action you know and love here, with a few little touches to call its own.

Pang is one of those classic arcade experiences where everything takes place on a single screen. You play as one of two brothers equipped with spear-guns. You can move left or right, and fire straight up in the air. The goal of each stage is to clear out all of the bubbles bouncing around before time runs out. The bubbles come in various sizes, and can only be completely eliminated in their smallest form. All other bubbles will break into two smaller ones when you hit them. The bubbles will bounce and ricochet off of the edges of the screen, and a single touch from one of them is enough to cost you a life. You need to be very careful about avoiding them, particularly if you have a bunch of small bubbles in play at one time. 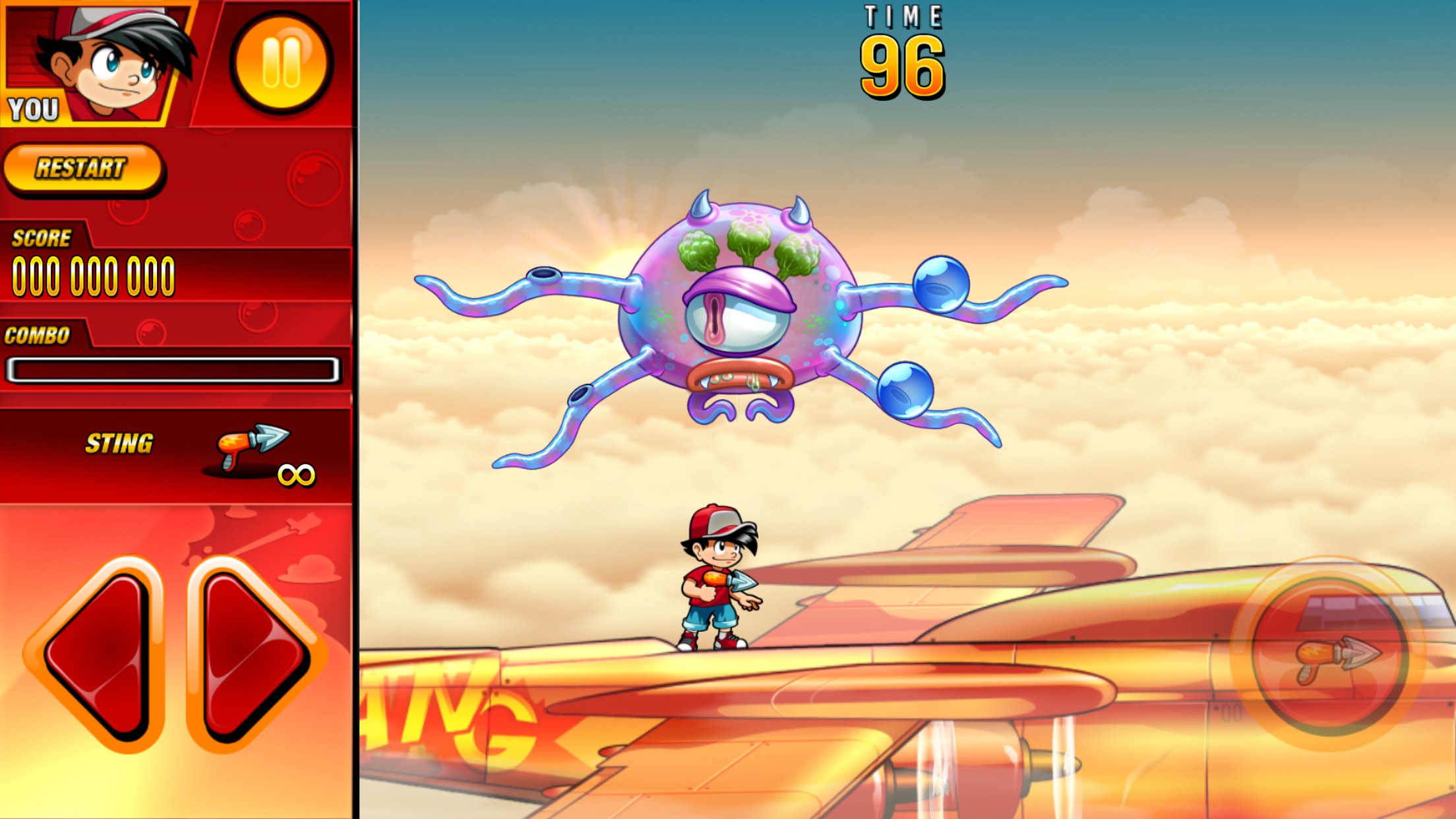 There are two aspects of the game that make this bubble-clearing business trickier than you might expect. First, your character can’t jump, so your only means of dodging is to run to either side. There’s no escape if you trap yourself on the edges of the screen. Second, and probably the familiar characteristic of the series, is the way your spear-gun works. In its default form, you can only fire a single shot at a time, and it travels quite slowly up the screen. If it hits anything, it will disappear, and you can immediately fire another. If it doesn’t, well, you’d be surprised how long a fraction of a second can feel when the screen is full of rubbery death. It’s safer to take out bubbles at a distance, but it’s considerably less efficient to do so, and with that timer counting down, you’ll want to hang on to every second. It’s a very simple set-up, but one with satisfying results.

Now, if that were all there were to Pang Adventures, you’d likely get tired of the game well before you completed its 100+ levels. But there are a lot of other variables that get thrown into the mix, and each stage is a little bit different from the rest as a result. Bubbles come in different colors, with each having a different movement pattern and weight. There are often platforms arranged in the stage to block your shots and divert the bubbles. Some of these platforms are destructible, while others are not. Sometimes there are extra animals wandering about who can harm you, help you, or both. Most stages will throw you a power-up or two to give you a more useful weapon or protect you, and judicious use of these items is often vital for coming out of the stage in one piece. Sometimes, the walls themselves close in on you. You never know quite what to expect when you enter a new level in Pang Adventures. That helps the game feel fresh all the way through, in spite of its relatively simple premise. 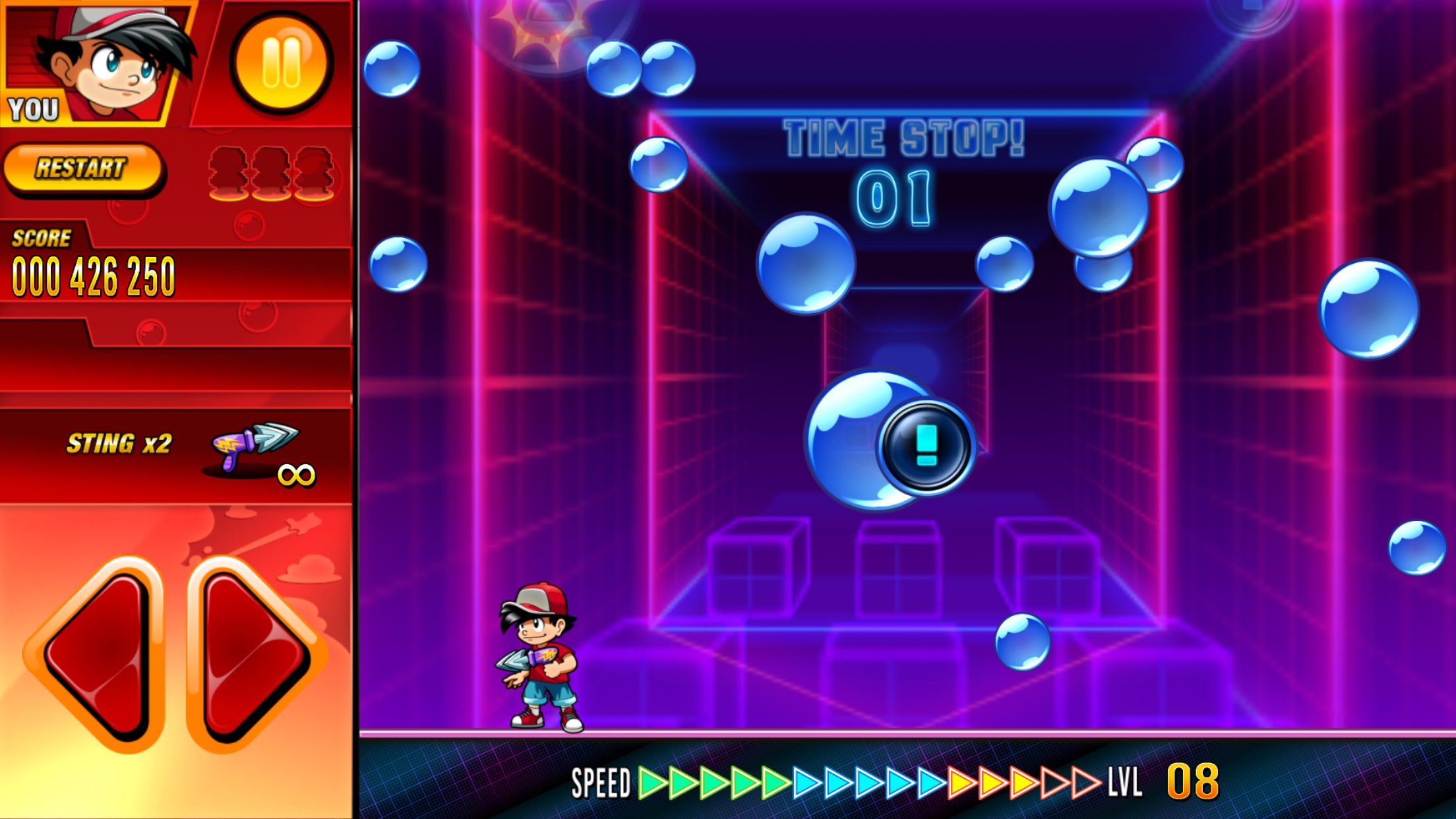 The big new addition in this installment is the presence of boss fights between each location. I was a little concerned about how these would work, but they don’t play out terribly differently from the regular stages. It’s a smooth fit into the existing architecture, and one that adds a bit of pleasing closure to each stop on your world tour. Pang Adventures also features a couple of extra modes in addition to the main Tour Mode. Score Mode unlocks when you finish the Tour Mode, and it challenges you to beat the entire game with just three lives and no continues. Good luck with that. Panic Mode is a kind of survival mode where bubbles will constantly drop from the top of the screen. Your goal is to last as long as you can and rack up a big score. The game supports leaderboards, so if you have some like-minded friends, this can be a good competition.

Unfortunately, that’s the only sort of interaction you’ll have with your friends. One of the best features of the Pang games is the two-player simultaneous play, allowing you and a buddy to take on the bubble swarm together. While that mode is available in other versions of Pang Adventures, the mobile version has to make do without it. I get that it would likely be a rarely used feature for most mobile gamers, but it’s still too bad it’s not here in some form. The only purpose the second Pang Brother serves on iOS is as another playable character, if you want to change up your appearance a little. It’s the only important way this version falls short, but I’m not going to fib, it’s a big omission. 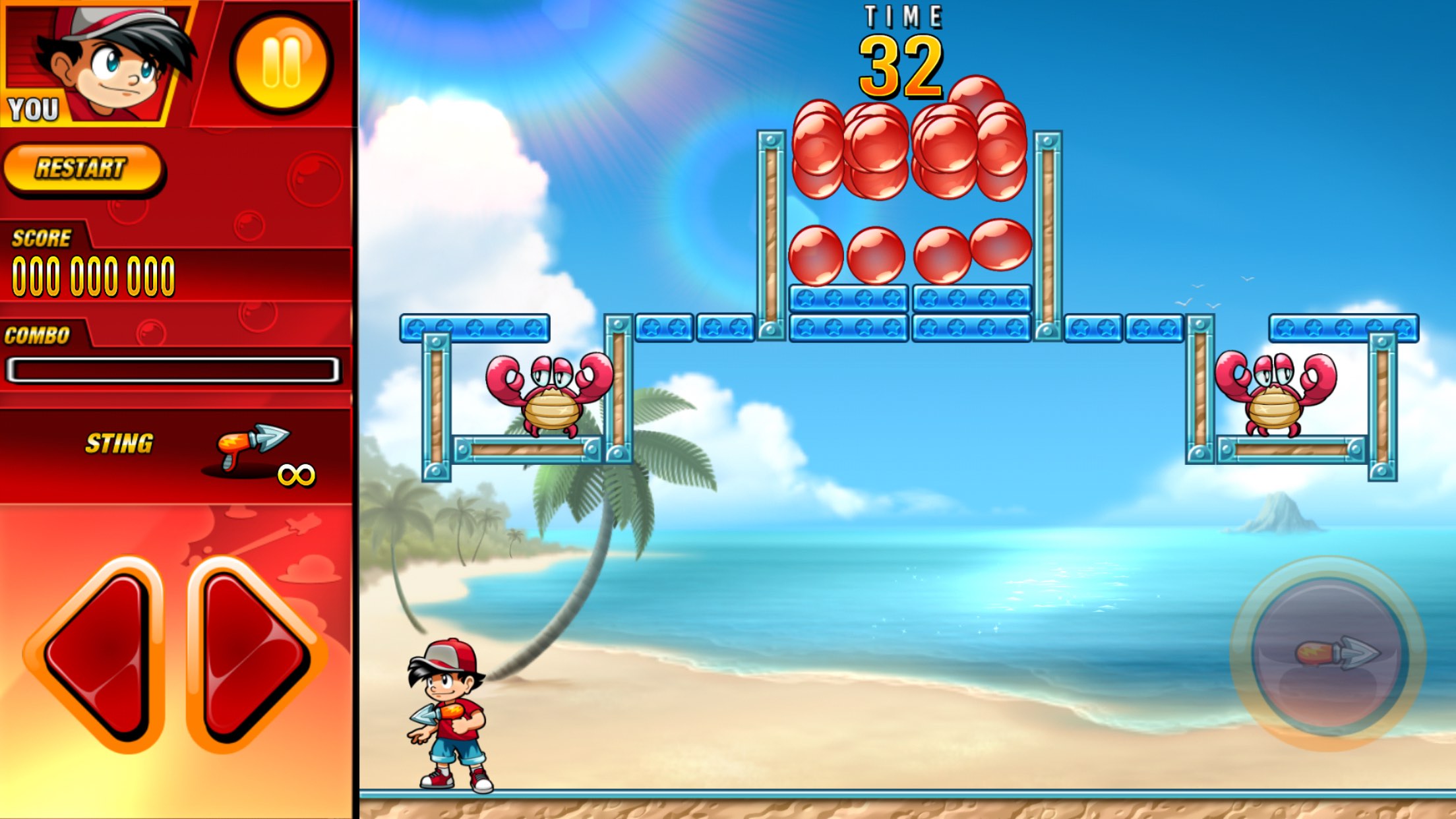 In all other respects, Pang Adventures came out quite well on mobile. Since the whole game is played with two directionals and a single button, it takes to virtual controls extremely well. Like the old games, the playfield in Pang Adventures is square, so it uses the extra real estate for the GUI. That keeps the playfield relatively uncluttered, which is important in a game that gets as fast-paced as this one can. I suppose this is as good a place as any to warn people that Pang has historically been a really tough series, and this installment is no exception. A single hit and you’re back to the start of the stage, and you’d be surprised how easily those hits can come if you’re not managing things correctly. In the regular Tour Mode, you have as many continues as you need, but you’re not moving forward until you can clear the stage. To add a little extra mustard for veterans, each stage has a target score to try and hit, with your performance graded on a scale of one to three caps. You don’t have to score three caps to move on, but it’s fun to shoot for those goals.

Pang isn’t without its flaws as a concept. Even with all of its gimmicks, repetition can start to set in during long sessions. People who don’t have the patience to deal with its tough difficulty are probably going to hit a roadblock early on. These things haven’t changed in Pang Adventures, and this time, there’s no two-player mode to help compensate. On the whole, however, this is a fine new installment in a series that is well-suited for mobile gaming. If you think you’ve got what it takes to grapple with what is, for all intents and purposes, a classic arcade design, you’ll probably like Pang Adventures a lot. If you’re already a Pang fan, you can grab Pang Adventures without a second thought. It’s completely worthy of its legacy.