Well, here it is, everyone. Magikiras (Free) is easily one of the worst gamebooks I’ve played in my years of reviewing, and hands-down the most painful. It’s absurdly long given its meager premise, poorly-written, and just plain boring. There are tons of spelling and grammar mistakes, and many other instances of incorrect English. It’s linear to a fault, with almost every choice in the book save a few very important ones coming down to the same set of approaches listed in the same order. Even those chances come entirely too sporadically, however. You’ll mostly just be tapping through page after page of banal text, praying for a release that is perpetually too far away. 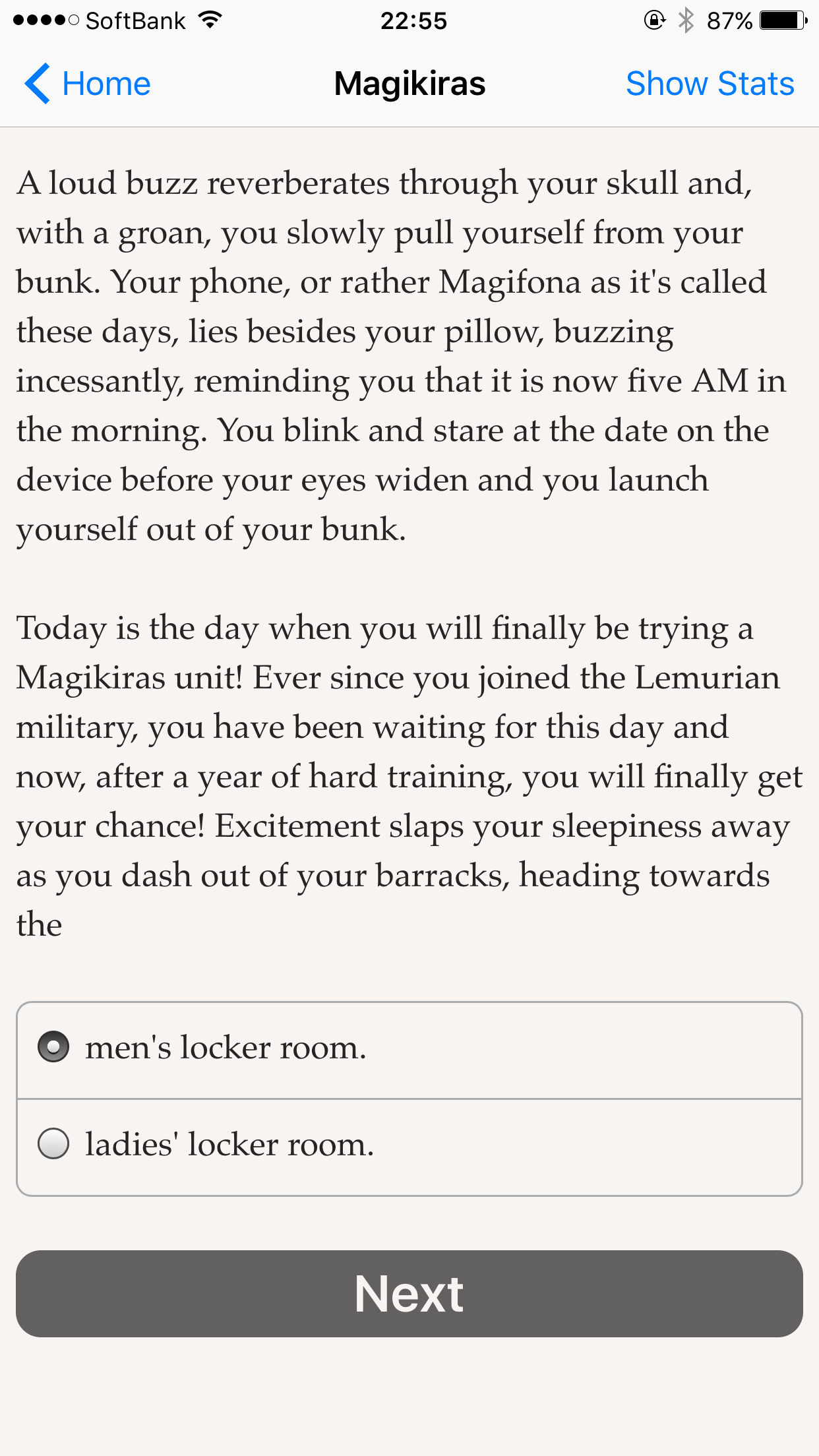 In Magikiras, you play as a young recruit to an elite force of soldiers who use Mecha suits called Magitek to defend their country’s interests. The enemies you’ll be brushing up against most frequently include seemingly supernatural beasts called Shadows and some regular old human pirates. Which of the two ends up being the bigger thorn in your side depends on a choice you make early on, and that decision will have a major impact on the rest of the game, so weigh it carefully. As usual for ChoiceScript games, this is a text-only game with branching paths and invisible checks against your stats from time to time. Stats are largely dependent on what you choose to focus on in your early training period, with an additional few chances sprinkled throughout the story to build on them or develop in other areas.

It’s clear that Gabriel Chia, the author, has a passion for the world he’s created. Characters are carefully detailed even if they are mostly stereotypes, and a lot of thought has been put into the world design and the politics of the various factions within it. The game will regularly dump a lot of information on you about these things, whether it’s contextually appropriate or not. You might carefully read each word the first few times, and skim the passages for important information for the next few times after that, but if you’re still stopping to read every word during these regular between-mission sit-downs by the end of the story, you’re made of sterner stuff than I am. To be fair, you can just skip these conversations if you don’t find them useful, but I’d prefer if they were integrated into the story more smoothly. 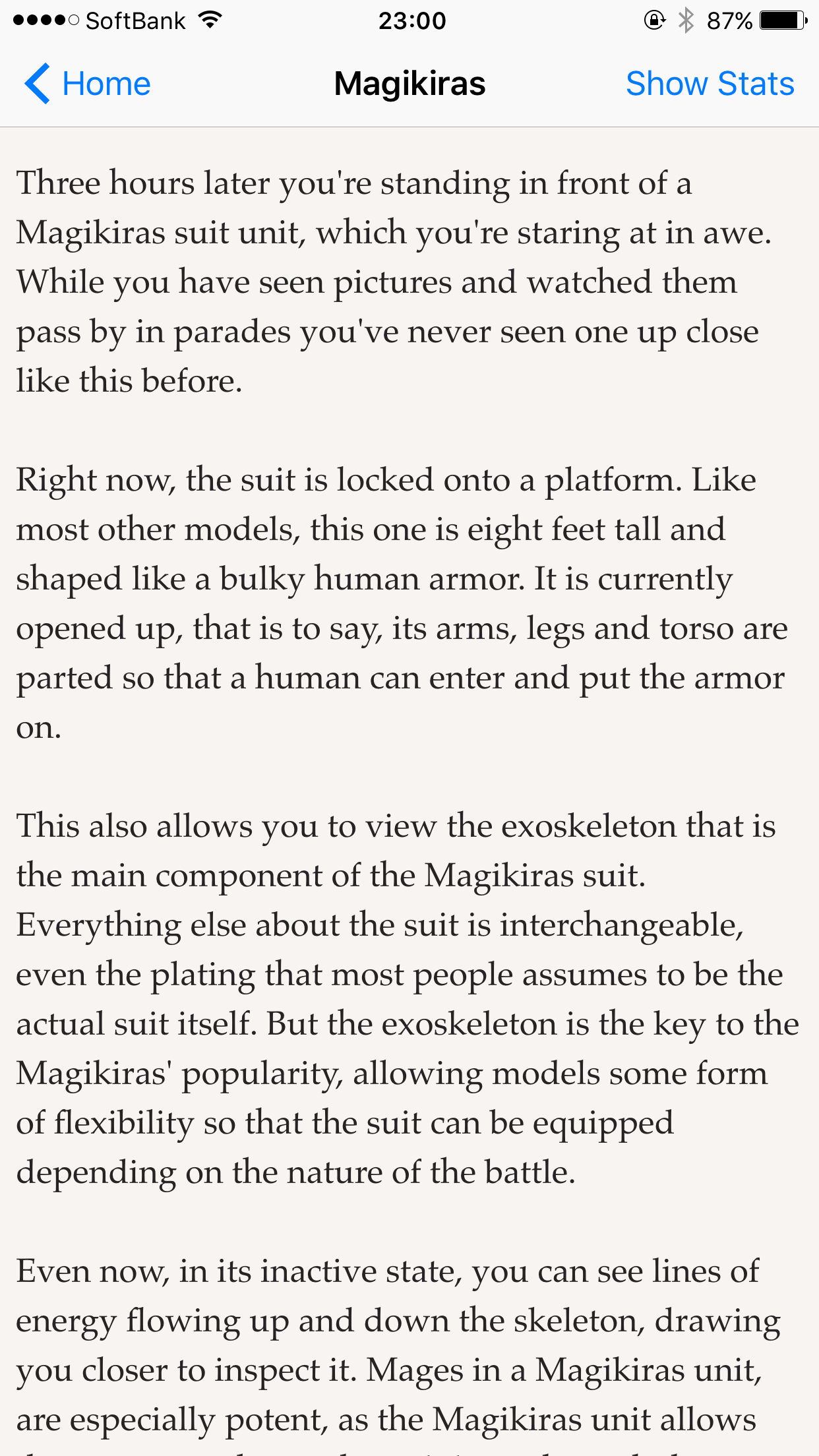 You can’t, however, skip the story itself. Well, you can, I suppose, but it would seem counter-productive to do that with a game that consists solely of text. Unfortunately, the general quality of the writing is quite poor throughout the entire game. The text in Magikiras is dull, long-winded, and jam-packed with cliches from direct-to-video action movies. While it’s relatively action-packed and contains a number of interesting scenarios, it takes far too long to get to its point. There are also a few branches that seem innocent enough at the time, but making the wrong choice in a few of them makes the game unwinnable. In a rather cruel stroke, the game waits until just before the climax to tell you this, as you’re nearing the end of this behemoth. At that point, it informs you that you’ll have no chance of winning and must start over from the beginning without so much as even a bad ending to give you some closure. I guess I’ll give it some credit for telling you exactly what you need to do to avoid a similar fate the next time, but a gamebook of this length really needs to telegraph its critical branches better.

I also didn’t care for the fact that whether or not you can reach the happier ending is entirely determined by a seemingly meaningless choice made very early in the story. There’s literally no chance you’d be able to anticipate the outcome of that choice at the time you make it, and while I think the less happy ending is the more interesting one here, it still felt incredibly raw to have such an important part of the narrative bound up in what appears to be an incidental observation rather than a plot-bending choice. It’s absolutely bizarre to me that the game spends the vast majority of its time being transparent to a fault only to end up completely opaque on the choices that matter most. That’s just about the worst thing a piece of interactive fiction can do to the player. All that, and the whole thing ends on a cliffhanger which is apparently never to be resolved. 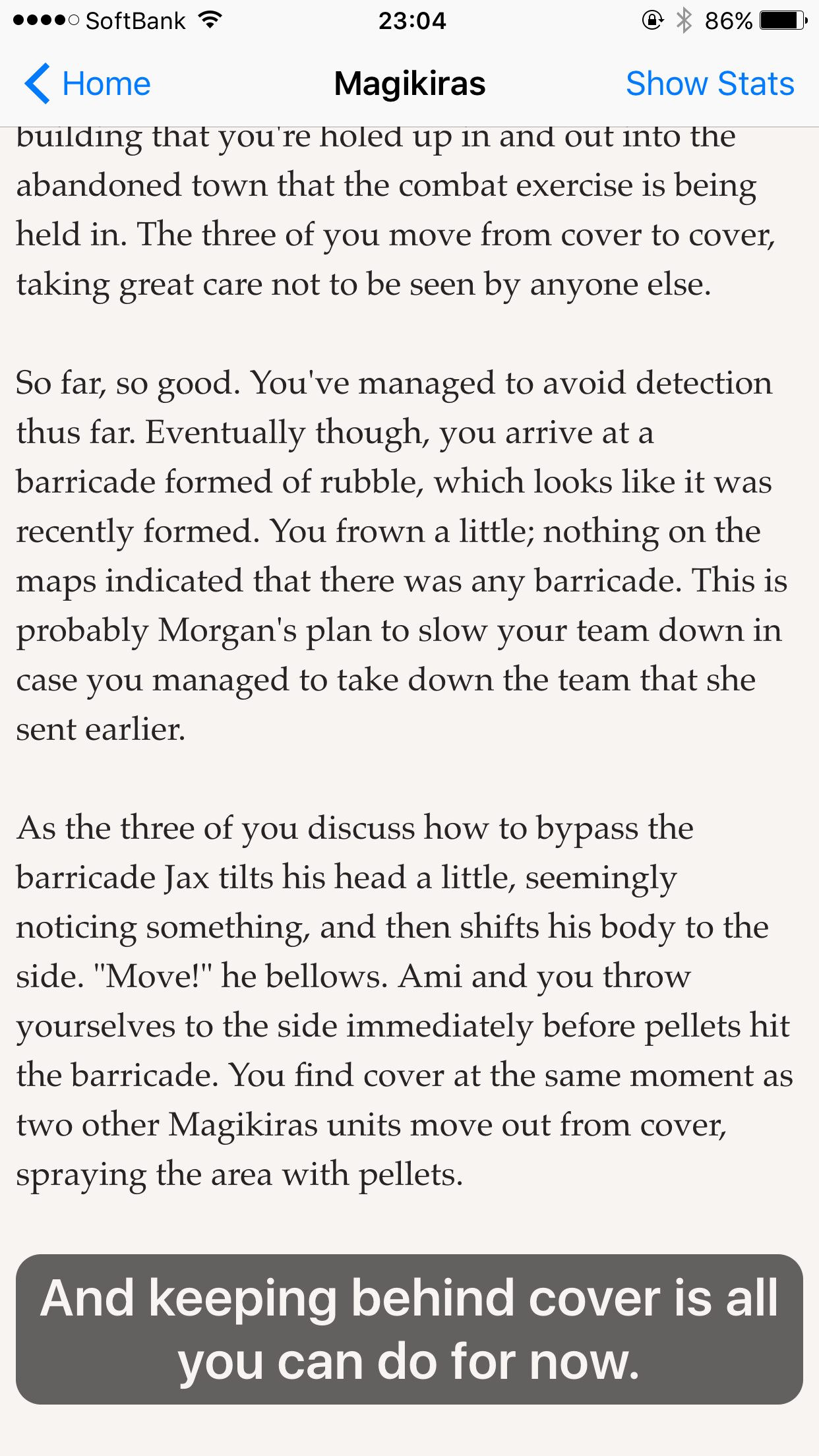 Then there’s the actual quality of the writing itself. The game is peppered with typographical errors, grammar mistakes, and outright odd phrasings like “10 am in the morning". Non-English words are occasionally dropped in with no explanation, translation, or even italics to indicate that the words come from a real, existing language and aren’t just made-up jargon. There’s no flow to the text at all, and it often shifts its grammar tense mid-stride. While I’m impressed at the length of the story, I can’t help but feel the author would have been far better off writing something half the size with twice the care put into it. The odd mistake here or there is certainly acceptable. Nobody’s perfect, after all. Magikiras has issues on nearly every second page, however, and it’s extremely distracting. When these issues are combined with an abundance of dry exposition and heavy use of tired tropes, it starts to feel like reading the story isn’t worth the trouble. Again, this is a big problem for a gamebook.

You can play the first few chapters for free, after which you have the chance to buy the full game via a $3.99 IAP. You get a lot of story for that price, if nothing else. I will say that those first few chapters are a reasonably good representation of the quality of Magikiras on the whole. If you opt to try it out and are somehow having a good time, you can probably feel comfortable spending your money on the rest of the game. Mind the late game sucker punch and the cheat ending, though. Like most other ChoiceScript games, Magikiras allows you to play as any gender and sexual orientation. It also features support for Game Center achievements and VoiceOver accessibility.

My understanding is that Magikiras is this author’s first gamebook, which at least provides some explanation behind some of its issues. While I applaud the author’s creativity and certainly respect the effort that must have gone into creating such a large adventure, I hope any future efforts are handled a bit more elegantly than this one. There are a lot of good ideas here, but the wheat-to-chaff ratio is one of the worst I’ve come across in this genre. Even if the theme is of interest to you, I can’t recommend Magikiras at all. I’ve had more fun taking transoceanic flights in economy class with a broken entertainment system than I did dragging myself through this.