Retro City Rampage DX ($4.99) finally hits iOS. Took it long enough, eh? Brian Provinciano’s “what if Grand Theft Auto was an 8-bit game that paid homage to every classic game and notable 1980s cultural phenomenon" title had landed everywhere but mobile. It was on desktop (PC, Mac, and Linux!), the Vita (on cartridge too!), 3DS, Wii U (not the Wii), Xbox One, PS3 and PS4, even a demo for NES! But the new platform releases started to dry up over time, even after the DX update to the original game that brought some new features and tweaks was released. And yet, no mobile version. Yet, one night it unexpectedly showed up! And while I have some issues with the game, I’m quite glad it showed up. 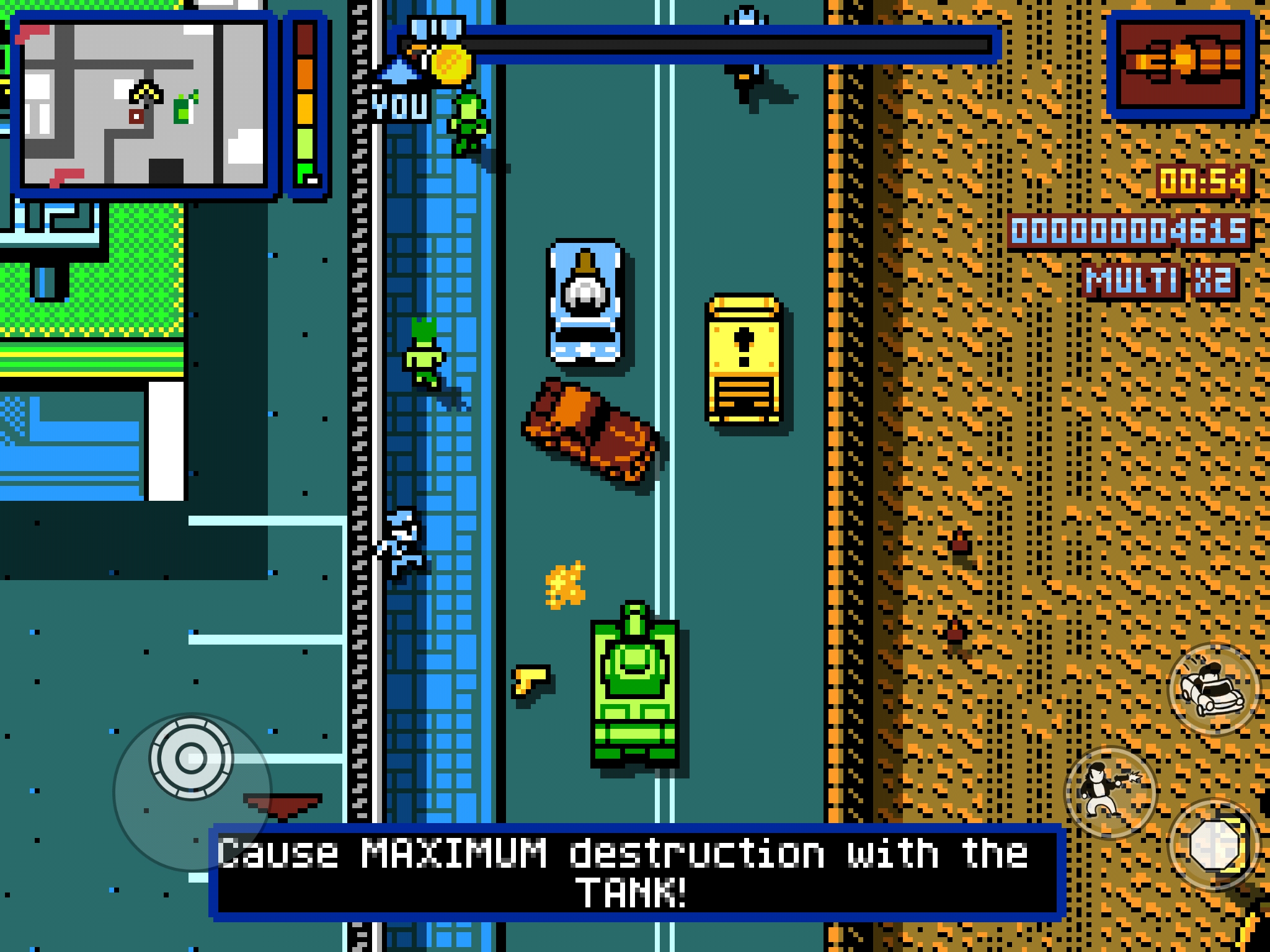 The setup is very similar to Grand Theft Auto, as you either go on missions for various shady characters, with the main guy you’re working for being a very obvious Doc Brown pastiche from Back to the Future. They only add up from there. You can advance the story with him, complete missions for others, or just run around town and blow stuff up for fun, or in one of the many mini-games that appears. There’s a lot to do, and because the game has this parodic tone, it means you get to do some things you can’t do in Grand Theft Auto. Want to thrash pedestrians around with a bionic arm? That’s possible! Get some super-fast running shoes and run over everyone. Ride a motorcycle that looks suspiciously like Yoshi. Get a crazy haircut, or a Master Chef helmet. Play a minig-ame that’s like Test Your Strength from Mortal Kombat but with the Epic Meal Time dudes. There’s a lot to do here, and the game revels in its goofiness.

What makes Retro City Rampage so impressive is the way that it really nails the whole Grand Theft Auto experience while being more compact. The city is smaller, but there’s no shortage of things to do or places to explore, and there are even secret cheat codes to find and enter. The game might not be as lengthy as your average Grand Theft Auto, but I mean, I’ve never actually beaten a GTA game, so do they need to be so dense with missions? RCR has no shortage of content, especially for the price. Plus, it’s got fantastic pixel art in spades, with all sorts of different color filters for your favorite retro system. And the whole thing is made by one guy, to mostly retro specifications, while not going too far in that direction. Like, the game isn’t afraid to have dual-stick controls or use a bunch of different buttons when necessary. But it still has that feeling like it could have existed in the NES days if it was made by some crazy visionary. It’s an impressive undertaking, no matter what. 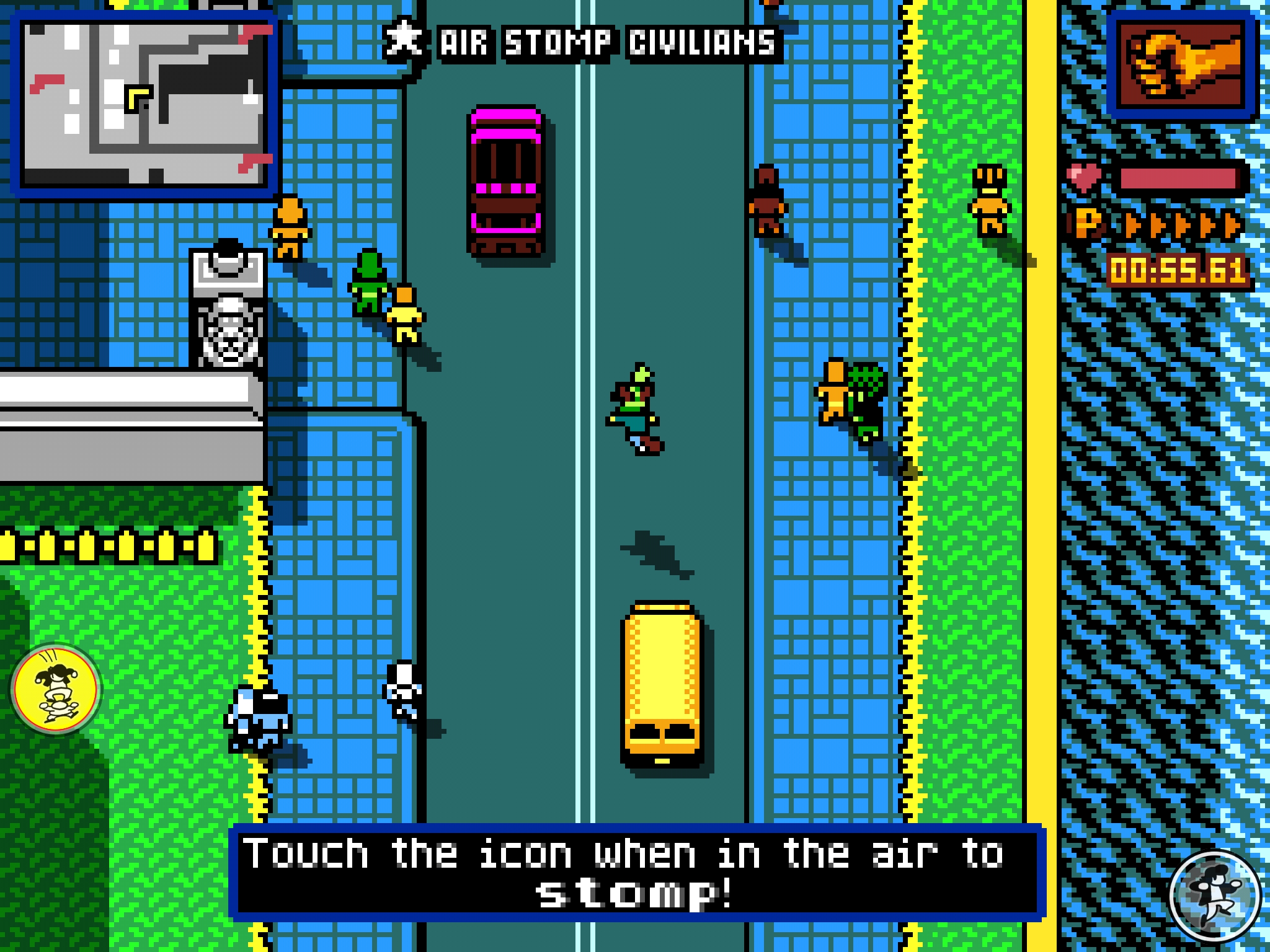 Virtual controls were always going to be an issue with this game, and some of the more hectic later-game missions can be quite difficult with just virtual controls. The jumping is an iffy enough proposition as it is. Ever try to jump over pits in a beat ’em up? It’s about as hard here, as you really have to pay attention to shadows to see where you’re jumping, and it never quite feels natural. At least you can play with an MFi controller if that’s your speed, and if you just want to run around and play some of the challenges like blowing up stuff with a rocket launcher around the city, then that’s totally fine with the touchscreen. Getting the gold medals is hard enough on a real controller.

I have two key issues with Retro City Rampage, though. One is that that thanks to the warped mobile economy, you can go and play a real, 3D Grand Theft Auto game from 3 to San Andreas for about the same price, if not a couple bucks more. Granted, the context and more compact nature of Retro City Rampage is unique compared to those games, and there’s some platforms that RCR is on that don’t have those Grand Theft Auto games easily available. You could maybe play the Stories franchise of games on Vita, for example. But on iOS, not only can you go and play the games that obviously inspired this, but you can do so for about the same price. Still, maybe the 2D nature and retro homages will appeal to you versus that standard Rockstar humor. 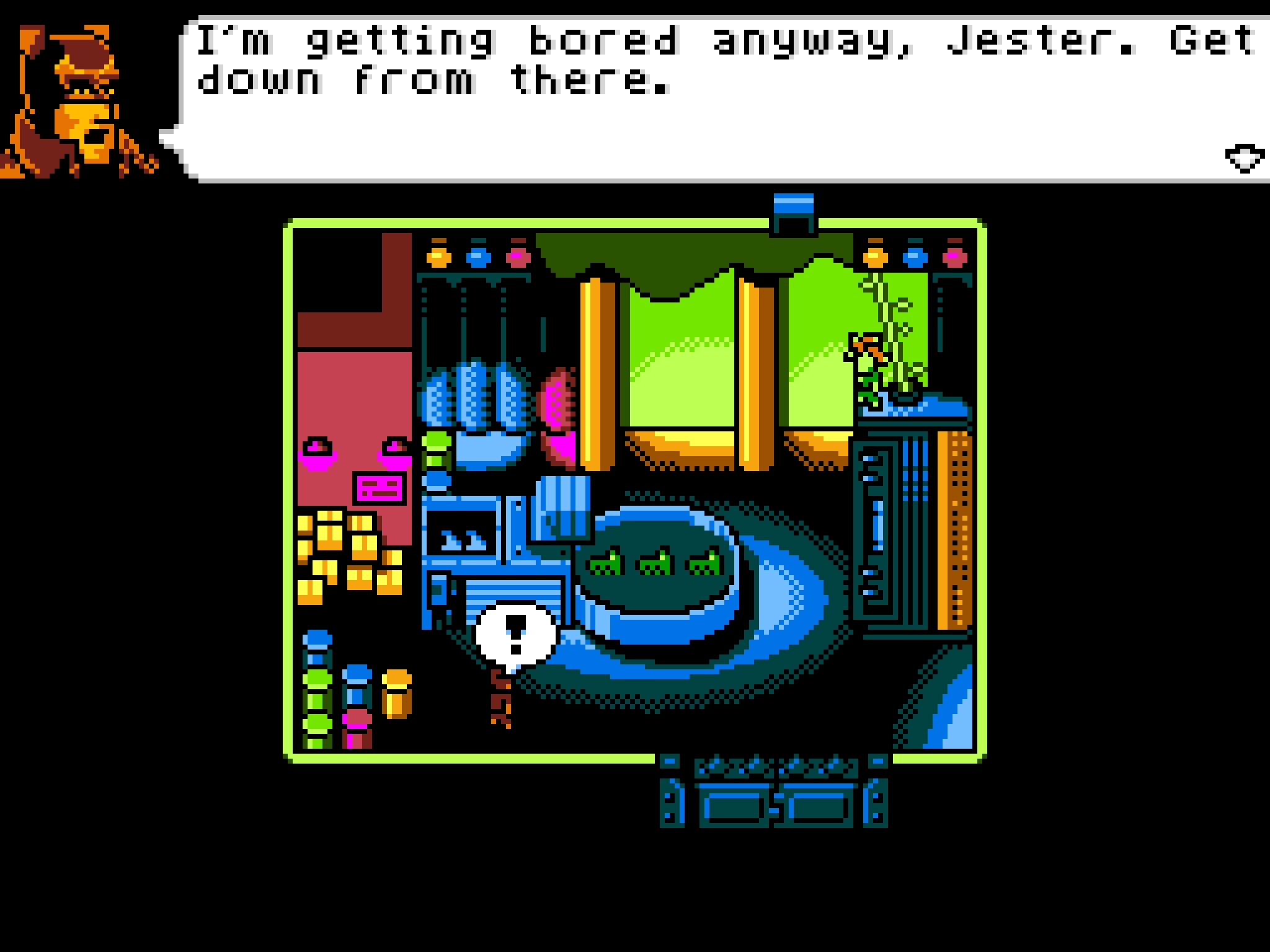 But if you don’t enjoy retro homages, well, you’re not going to like this. This throws homage and reference at a lightspeed pace at you. Some of them are actually pretty cool, like the arcade games that take after the Bit.Trip and Super Meat Boy games. And look, I enjoy doing parts that are inspired by Contra and Metal Gear, I grew up in that era of gaming where this all resonates with me and amuses me. But it’s not hard to feel like hey, this game is relying on “remember this 1980s cultural phenomenon?" just a bit too much, to a point that this struggles to have its own identity beyond being a mishmash of inspirations. That, or this is the ultimate retro homage: you literally physically could not reference more pieces of gaming history than what Retro City Rampage contains. I’ll be interested to see how its upcoming sequel Shakedown Hawaii turns out, because I really don’t think you can go to the same well twice, when you went really deep down the well the first time, right?

Also, another thing has always bugged me with the tone of the game, and that is the wanton violence. There’s just something about the fact that everyone is made with small bunches of chunky pixels, that makes it feel weird to mow down dozens of them at once. And the game has many missions and mini-games that blithely make killing pedestrians and bystanders in the game feel so off-putting because you kill so many of them for no good reason. There’s not as much in the way of consequences, as it’s easy to get the coins that clear your wanted level, too. It’s not really that different from Grand Theft Auto, but maybe it’s an aspect of the uncanny valley that’s in play with GTA being somewhere between reality and fake, versus RCR reveling in just how fake it is. Maybe I’m weird, but it’s always kind of made me go “hmmm" when playing this, and it has yet to really subside. It doesn’t bother me enough to not play the game, but it isn’t exactly leaving me feeling warm and fuzzy after playing this.

Retro City Rampage DX is without a doubt a well-made game, and one with some real high points to it. But there is that question of whether you should play it when the games it takes obvious inspiration from are available for about the same price. And your taste for referential humor will have a huge sway on what you think of the experience. But this is a game that will really click with some people, and its more compact nature compared to the expansive Grand Theft Auto games might be more your speed for open-world carnage. I still have some misgivings, but it’s overall a solid package.