Mobile players who spend as money on mobile games are spending almost as much as console players right now. Slice Intelligence estimates that the average paying player on mobile spends $86.50 per year. Compare this to a ‘traditional gamer’ who spends $91.58 per year. This is an interesting perspective on metrics, because we often see smaller average revenue per user quantities, with non-paying users mixed in with the paying users. And while converting people to paid users is a challenge, it shows that paying users are committed to spending money on their favorite games on mobile, and they’re spending as much as ‘real’ gamers.

The game where people are spending the most on average is Game of War (Free), where the average player spends $549.69. That seems like a lot, but that’s what, 9 console games in a year? A dollar or two per day? Granted, there are many high-money whales in the game spending tons of money, and I’d love to see median numbers on spenders in this game as well, but is that average really so crazy? People who enjoy a game that is intended to be played regularly over long periods of time are kicking in money and getting likely hundreds of hours of satisfaction out of it. 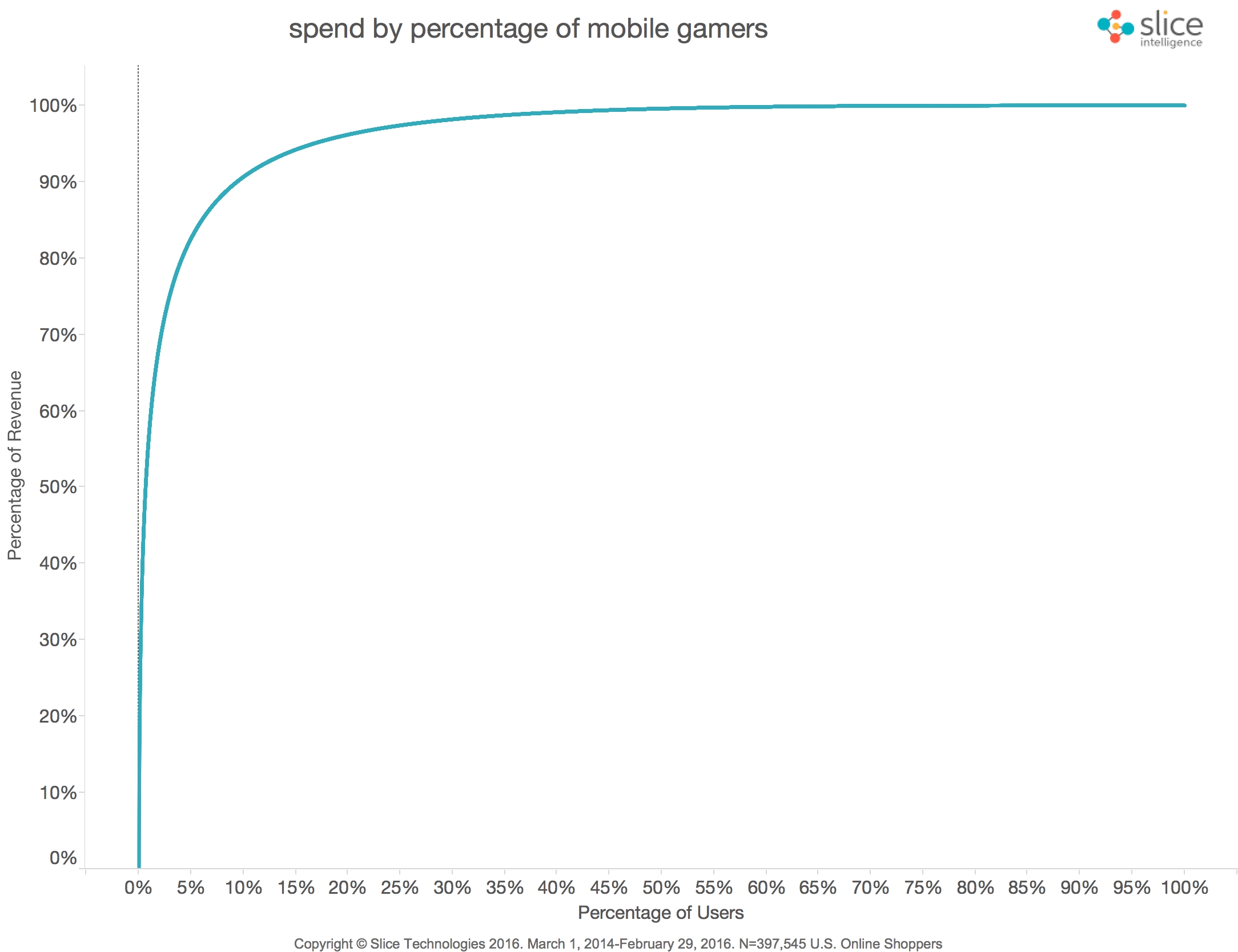 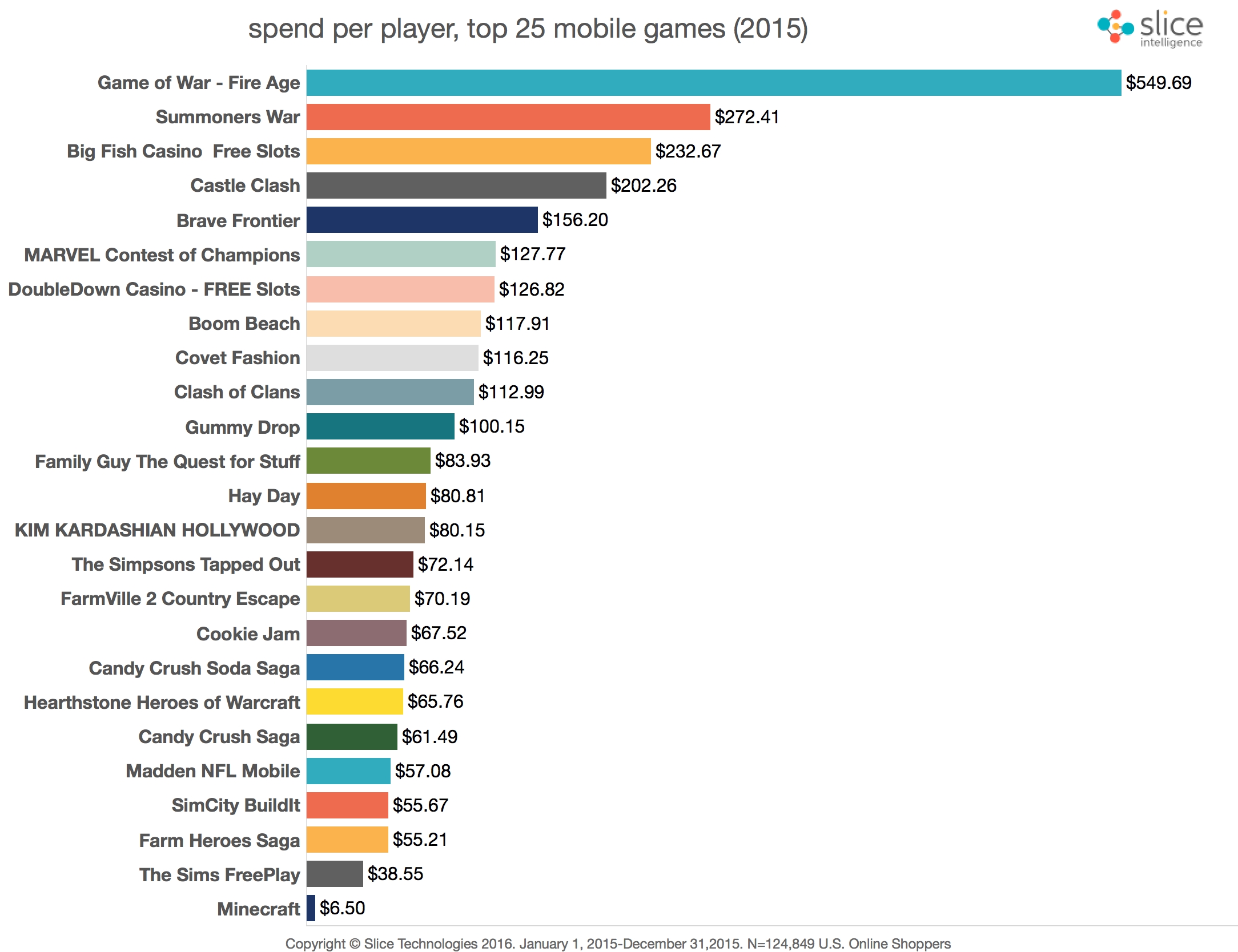 Also, if you ever needed a reminder of why free-to-play is so lucrative, Slice makes it clear, as Minecraft ($6.99) has a $6.50 average spend, with the next popular game they list being The Sims FreePlay (Free). The average spender in that game drops $38.55 per year.

Whales still play a huge role, as 1% of people who pay contribute 58% of the revenue from IAP, with 10% contributing for 90% of sales in total. Before you scream that this is the sign of an unhealthy or unsustainable market, consider that 90% of console/PC gaming revenue comes from 28% of players. What I’d be interested to see is if over time, as free-to-play gets a bigger foothold, if the numbers start to shift to be similar to mobile. With paid games still being prominent on console and PC, you have to pay to play, but if the option to play for free becomes more prominent, perhaps the numbers will look a lot more like mobile’s does.

And here’s what’s interesting as far as the population of mobile gamers and console/PC gamers goes: 43% of people only buy mobile games, versus 37.8% traditional gamers. There’s a 19.2% crossover, and I do think that crossover will increase over time as more companies take mobile and free-to-play more seriously – and it’s not like traditional gamers don’t have phones and tablets – but it shows that there is a population of people willing to spend on mobile games – and there’s evidence the mobile spenders, including players who never spend, are starting to outnumber the people on traditional gaming platforms.

Of course, there is a curious factor in play as well, that among the entire player population, 0.19% of all users, not just paying ones, represent half of all revenue, according to a Swrve report. Non-whales still provide value, with their IAP and ad views providing the other half of that revenue, not to mention the non-monetary value of helping to populate the game for other players, and possibly providing word of mouth benefits. But that’s the risk inherent in giving something away and hoping people pay later: you’re hoping that people will pay, and even the most successful games are only converting a small number of players. But that’s why there are monetization tactics, soft launches, and various forms of testing to ensure that a game is in the best possible shape to make money for its creators. Of course, if you can’t do those things, then it’s a real risk, but such are the chaotic whims of the free market and our new age of zero scarcity.