Monkey Swingers (Free) is a game that has some immediate appeal, but it doesn’t take long for it start pushing you away. Not only is the game quite tough, it also demands a fair bit of concentration, and a good run usually lasts longer than the excitement does. If you intend on getting your little monkey up into space and beyond, you need to demonstrate a high level of skill, but also set aside a reasonably big chunk of time to dedicate to the task. I like the idea behind the game well enough, and it’s certainly got a nice system of upgrades and fun cosmetic items to unlock, but it just doesn’t come together as well as I’d hope. 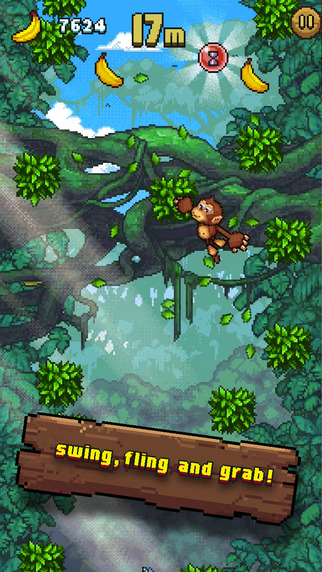 In Monkey Swingers, you play as a little monkey who apparently wants to climb all the way to heaven. It does this by moving up a vertical shaft, grabbing and swinging off of handholds. Along the way, there are bananas to collect, which work as the game’s currency, and a large assortment of power-ups you can grab. The bottom of the screen moves up behind you, and should you fall off, you lose. It’s a simple game in concept, as all you need to do to play is tap, hold, and release with good timing. Your monkey can grip with either of its hands if you tap and hold when it’s near a handhold. Once it latches on, it’ll spin around the grip point until you release, at which point it’ll go flying off in whatever direction it was pointed in, slowly spinning all the way. The handholds are relatively small and spawn seemingly randomly, so it’s a different challenge every time you play.

When you inevitably miss a jump and go crashing down, you’ll return to the main menu, where you can spend the bananas you’ve earned on a fine selection of upgrades for your power-ups and some funny hats. Things get really costly in a hurry relative to what your banana intake probably looks like, but you can throw $0.99 at the game to get a permanent banana doubler that helps a lot. There’s also a selection of banana packs you can purchase in varying amounts if you’d rather just cut to the chase. The only other monetization in the game is the presence of incentivized ads, which let you earn some extra bananas when you die, with the amount being relative to how many you collected in your current run.

Should your Game Center still be functioning, the game has support for leaderboards, and also allows you to easily share your best height reached on a few different social networks. It also uses nicely integrated in game markers to let you know when you’ve passed your previous run and your best run. Naturally, since you’ll be investing in upgrading those power-ups, your scores should logically trend upwards even if your skill isn’t improving greatly, but that aspect does make it a little hard to make straight comparisons with friends. The starting forms of the power-ups are barely helpful at all, while after they gain a few levels, they’ll make a big difference. 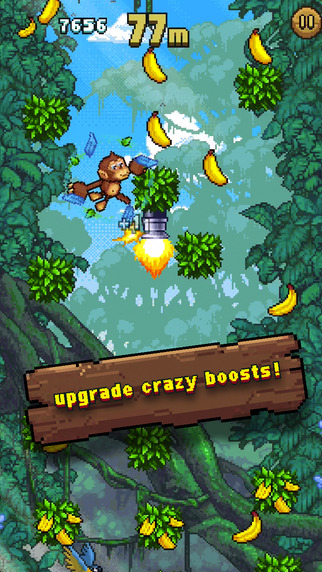 The variety of power-ups is kind of nice because the odds are very high that you won’t run into the same items in any two plays, but there’s a bad side to that. There are a few power-ups which stand out significantly from the rest in terms of how useful they are. With so many less useful power-ups in play, you probably won’t be able to depend on getting any particular item that you specifically want. Random factors are a nice thing in arcade games as they can add some spice and excitement, but in this case, the good power-ups are so good that they tilt the whole game. Picking up a Miracle Bush power-up starts to feel like a miracle, and I started to resent the runs where I would get a bunch of magnets and banana bushes instead.

While Monkey Swingers mostly plays okay, there were a couple of things that felt off for me. You’ve got to be very precise when you try to grip onto a handhold, and you really have to gauge what the result of your grip is going to be. If you missed, you’ll want to tap again quickly, but if you actually caught the handhold and then go to tap again, your monkey will release its hold and drop, often fatally. You really have to watch where your monkey’s hands are as you approach a handhold and hope you’ve supposed correctly.

The game also has a weird pace to it. The handholds are usually far enough apart vertically that you need to swing around your current perch a couple of times to build momentum before leaping. You’re stopping and starting, stopping and starting again nearly the whole way through, when the game is most fun in those rare moments when you can zip from perch to perch. I’m also not a big fan of having to go back to the main menu every time I lose. A quick restart button would be great, since I don’t usually have enough bananas to buy anything anyway after most runs.

At the very least, the game looks really great. The sprite work is excellent, with vivid colors and plenty of detail. There are lots of animations to help make the small world come alive, and the main character is quite cute. There’s a decent assortment of hats you can put on the monkey, and they all look like they belong on its head rather than just floating there like in many other games. The audio end of things is somewhat more subdued, but the music that plays during the game is thematically-appropriate and doesn’t get too repetitive over time.

It feels like Monkey Swingers is only a few little changes away from being an excellent game, but those small issues add up to something that just doesn’t work all that well for me. For a free game, it’s quite player-friendly even if you don’t pay anything, and you’ll likely get a few laughs out of it, but in its current form, it falls into the troublesome category of sessions requiring a bit too much time and concentration to cram into short slices, yet being too repetitive and capricious to satisfy for longer sit-downs.