Welcome to another weekly roundup of Hearthstone (Free) news, and as has been the case the last few weeks, Whispers of the Old Gods news is what’s capturing all the headlines. We continue to see a trickle of cards spoiled daily, with some creating anticipation while others having players question Blizzard’s strategy. Despite the complaints, everyone’s happy to see more cards from the upcoming expansion, and everyone’s impatience is growing daily. We all want not just the expansion to hit but also the change to Standard that should usher in a different era for Hearthstone populated by new archetypes and new ideas; at least that’s everyone’s hope. This week, we also got more predictions about the various nerfs coming to Classic and Basic cards, and, of course, some tournament news. So, let’s proceed.

We got to see some very interesting – and some crazy – cards this week, which I think created even more anticipation about the upcoming expansion. We saw a Legendary Rogue card, Xaril Poisoned Mind, which at 4 mana is cheaper than most legendaries, and his Battlecry and Deathrattle are the same, “add a random Toxin card to your hand." The Toxins are a lot like Spare Parts as they cost 1 mana and do things like deal 2 damage, give a friendly minion Stealth for a turn, and so on. Most players are quite excited about this Legendary, especially since it can be played quite early (although the stats leave plenty to be desired). We also saw a much less exciting card in the form of a 5 mana Weapon, Tentacles for Arms, which is 2/2 and Deathrattle “return this to your hand."

There were some other interesting cards revealed this week, with the award for the craziest one going to the Warlock card Renounce Darkness, a 2 mana spell that replaces your Hero Power and any Warlock cards with another class’s, and those cards cost 1 less. This is a very interesting card, and I can see it maybe being played towards the end of a match where you can’t use your hero power anymore. We also got Faceless Shambler, a 5 mana 1/1 Taunt that copies a friendly minion’s stats, and the very promising Shaman Legendary Halazeal the Ascended, a 5 mana 4/6 card that restores that much Health to your hero whenever your spells deal damage. I really like this one, and I hope I get him relatively soon. Check out all the revealed cards here.

Some of the WoG cards we’ve seen so far have been corrupted versions of older cards, like Corrupted Healbot. Yesterday, though, we got the opposite, a card that went from corrupted to “uncorrupted," and this one was the infamous Ragnaros the Firelord. Now, he’s turned into Ragnaros, LightLord, a card that heals for 8 instead of deal 8 damage to a random enemy. And this one can attack, unlike Ragnaros, so he’s got at least some players excited. From the looks of it, he’ll be the only “uncorrupted" version we’ll get, but it’s fun to see ideas like this one. Go check out the story here and the explanation from the designers regarding this rather interesting new Legendary.

As we wrote a few days ago, Blizzard unveiled the second God from WoG after C’Thun, and this one definitely feels different than the first one. N’Zoth the Corruptor is a 10 mana 5/7 Legendary with a Battlecry “summon your deathrattle minions that died this game." N’Zoth will raise silenced Deathrattle minions but not cards that were buffed with Deathrattle or transformed. Also, the resurrected minions will be random. The internet consensus (joking, there’s no such thing) is that this God will be a strong finisher in Deathrattle decks, but with so many strong Deathrattle minions departing Standard for the land of Wild, many are unsure how strong such decks will be. Check out our story here and the Blizzard announcement here.

Standard should substantially change the way the classes look, and this is how GosuGamers hopes they look once the dust settles. Many of the suggestions are very similar to the ones we’ve read about in previous Touchstones. Some of the differences are making Savage Roar only give +2 to a minion and the ones next to it, Fireball doing 5 rather than 6 damage, Kill Command doing 2 and 5 damage instead of 3 and 5, and Paladin’s Divine Favor becoming much weaker by going up one mana cost and drawing 3 cards only if your hand’s empty. The writer also wants to change the Warlock hero power by giving it a 2-turn cooldown that should solve many of the class’ problems. There are also a few more changes that you can check out here.

This LiquidHearth story looks at some old cards that might be making a comeback after the Standard hits. First of all, the writer believes the meta will slow down. So, Cairne Bloodhoof might become quite a thread since it shines in control and midrange matchups. The Black Knight could also see play since it’s ability to yake out taunt cards is valuable. The other card is Legendary Varian Wrynn, which might see play as the meta slows down. What do you think about these cards? Are there any other cards you believe (hope) will make a comeback when Standard hits?

Some Hints Regarding the Possible Standard Nerfs

According to this LiquidHearth story, these are some of the hints left by Blizzard’s designers at the meeting prior to the WoG announcement. These are hints, not certainties, so keep that in mind. Basic Rogue cards are seen as a bit too strong, so the devs are careful not to add more powerful Rogue cards. Some Basic cards could be nerfed to open up some design space for stronger Rogue cards in the future. As for the Druid, the devs experimented with nerfing Wild Growth and Innervate, but that changes the class’ core a bit too much. So, those cards might remain unchanged after all. 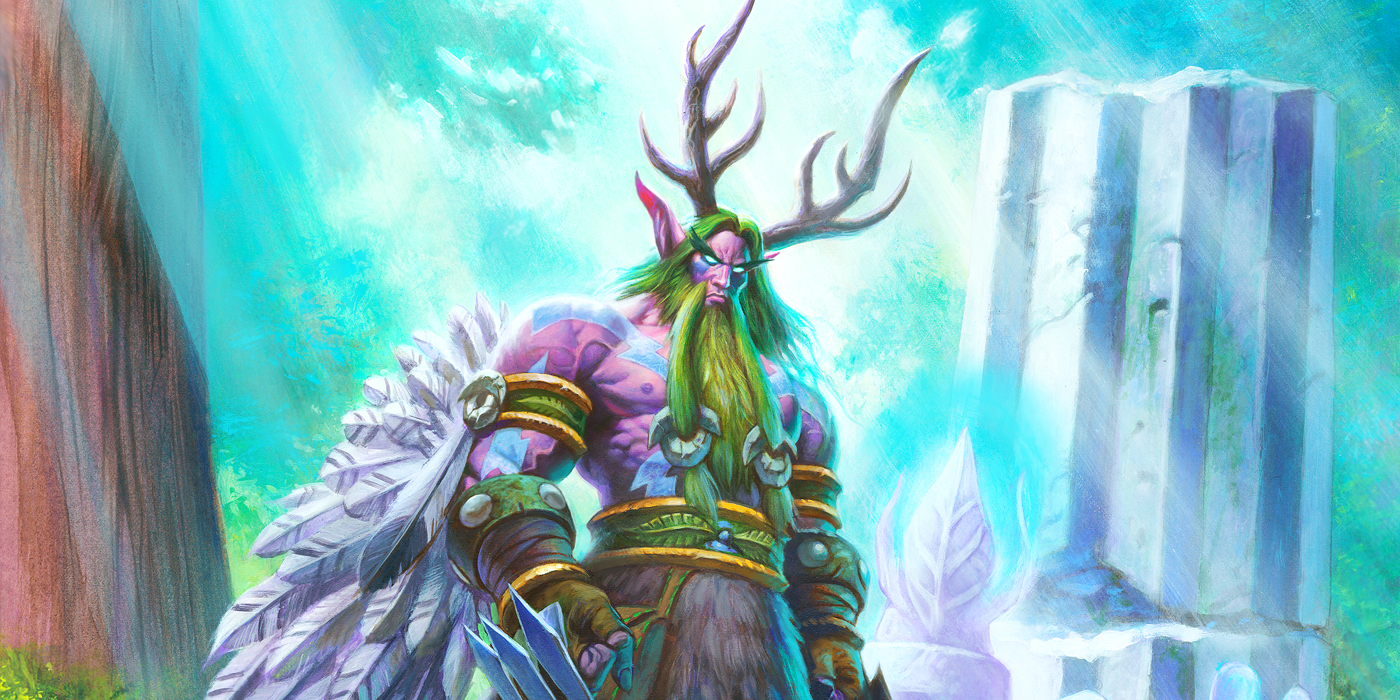 Blizzard’s looking to weaken Silence because at the moment, those cards are too disruptive. With Antique Healbot rotating out, Blizzard might be bringing in more class-specific heal cards. Big Game Hunter and the Giants are problematic cards, and Leper Gnome might also see a change. And overall, Blizzard is going to avoid cards that can find a place in pretty much every deck. If they could turn back time, they would have released Dr. Boom either as a class deck or change it so it wouldn’t be the auto-include it has been. So, what do you think about these hints? Do they sound like what you’ve been thinking about, or would you go a different way?

This Week’s Tavern Brawl Had Everyone Complaining

It’s not often that almost everyone complains about a Tavern Brawl, but this week’s An Evil Exchange prompted many to complain about the imbalance between the two decks, Rafaam’s and Kel’Thuzad’s. Rafaam’s hero power allowed him to get cheap, random Legendaries, but it needed two staff pieces before that could happen. Kel’Thuzad’s, on the other hand, allowed him to resurrect minions. While Rafaam’s hero power sounds very powerful, many players soon found out that by the time you can spit out cheap Legendaries, Kel’Thuzad’s board was very hard to clear, especially since Rafaam’s deck lacked good board clears. So, while overall this was an entertaining Brawl in terms of all the legendaries played, it was really hard to win with Rafaam, and that frustrated many players.

If you like netdecking or simply analyzing the decks of pro players, look no further than the decklists of the 8 European Winter Championship Contestants. There’s plenty of interesting decks, so take a look at all of them here.

GosuGamers put together some very interesting interviews from some of the best players in the game. Take a listen to interview with Orange, Elky, Dog, TwoBiers, SuperJJ, and Inderen, all of them very interesting and entertaining.

DDaHyoNi is the APAC Winter Champion

The third regional championship came to an end this weekend, with DDaHyoNi winning the Asia-Pacific region championship. The champion lost to handsomeguy in the groups, so things weren’t looking that rosy for him. In the playoffs, he went on to beat Pipingho, the very entertaining Taiwenese “Shaman master," and then went on to again face handsomeguy, and after going down 2-0, he managed to reverse and win, taking home $25,000 and punching his ticket for the Hearthstone World Championship.

Hard to care too much about the current meta since we all know it’s about to change. But the longer the expansion isn’t with us, the more we should care about what’s going on this month, I suppose. The HearthHead Midweek Meta Review sees some subtle shifts in the meta, with Zoo Warlock becoming the most prevalent deck out there at the moment. Elise Control Warrior has diminished the presence of Freeze Mage on the ladder, so Zoo doesn’t have any really bad matchups and takes care of the popular Druid decks easily. Midrange Druid and Secret Paladin, of course, follow in second and third place, so the meta hasn’t changed that much.

A Mom Playing For the First Time